Online pharmacies face losing their licences if they don’t stop selling dangerous drugs without doing patient background checks, a regulator has warned. Online pharmacy has to adhere with all the regulations and guidelines set by government.

Some have been accused of selling addictive drugs such as opioid painkillers like tramadol and morphine after only asking patients to fill out online questionnaires.

One was found to be falling short of GPC standards while using doctors in Spain and the Czech Republic, while another was prescribing human drugs to animals.

White Pharmacy, a company based in Hampshire, was last week banned from selling restricted painkillers for failing to meet standards set by the GPC. 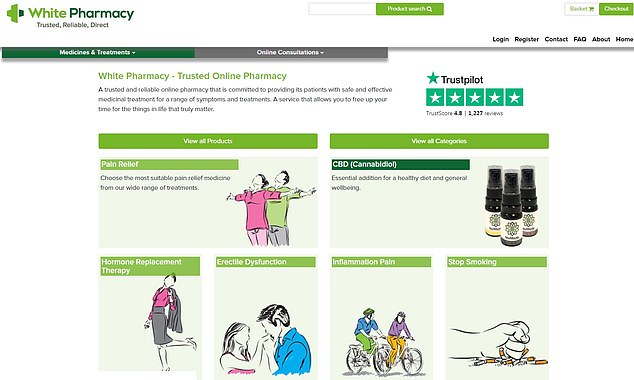 White Pharmacy, based in Alton, Hampshire, has been stripped of its licence to prescribe drugs in schedules one to five, meaning it can no longer sell powerful opioid painkillers or sedatives

‘I want to reassure patients and the public that we are taking robust action against the small number of online pharmacies and pharmacy professionals who have put the safety of patients at risk,’ said Duncan Rudkin, chief executive of the council, which is the independent regulator of pharmacies in the UK.

‘When prescribing and supplying high-risk medicines such as opioids, it is not acceptable to rely solely on information provided by the patient via an online questionnaire.

‘The prescriber needs to take other steps such as consulting with the patient, reviewing medical records and contacting the patient’s GP, as outlined in regulatory standards and guidance.’

White Pharmacy, based in Alton, Hampshire, is the most recent to have had its licence for selling schedule one to five medications suspended.

These include heavy duty painkillers and sedatives such as morphine, gabapentin, temazepam, tramadol and codeine.

The exact reasons for White’s suspension haven’t yet been revealed but a report from its most recent inspection is due to be published soon, the GPC said.

Two other sellers, Medix Pharmacy and Pronto Healthcare – which runs www.ukpharmacymeds.com – had enforcement action taken against them in August.

Pronto Healthcare, which uses doctors in Spain and the Czech Republic to fill out its prescriptions, also had its schedule one-to-five licence suspended.

The GPC said it was failing to make sure drugs were suitable for the people they were being prescribed for.

Contraceptive pills were given to people whose identities hadn’t been checked and the doctors were liberally prescribing ‘large quantities of opiates’. 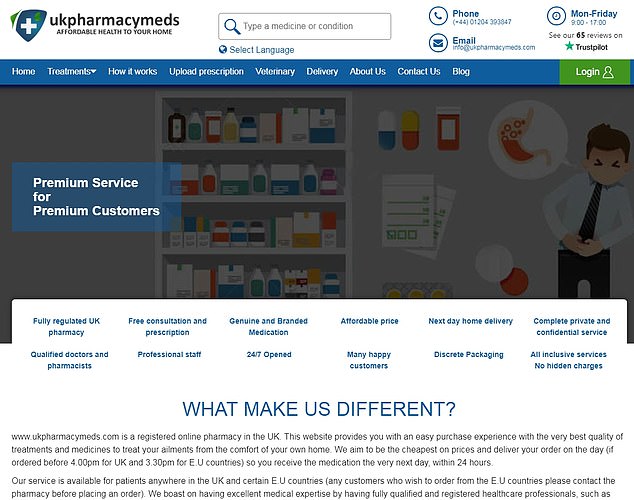 Pronto Healthcare, which runs www.ukpharmacymeds.com, had its schedule one-to-five licence revoked because it wasn’t carrying out strict enough checks on the ‘large quantities of opiates’ it was selling and was handing out contraceptive pills without checking people’s identities

Medix, which operates through www.medixpharmacy.co.uk, was barred from continuing to dispense medicines to patients overseas.

The GPC found it had been prescribing human drugs for animals, which was illegal, without the pharmacist even knowing who or what he was prescribing them for.

And Medix staff did not keep accurate records of what it had prescribed to whom when it came to its overseas operations. 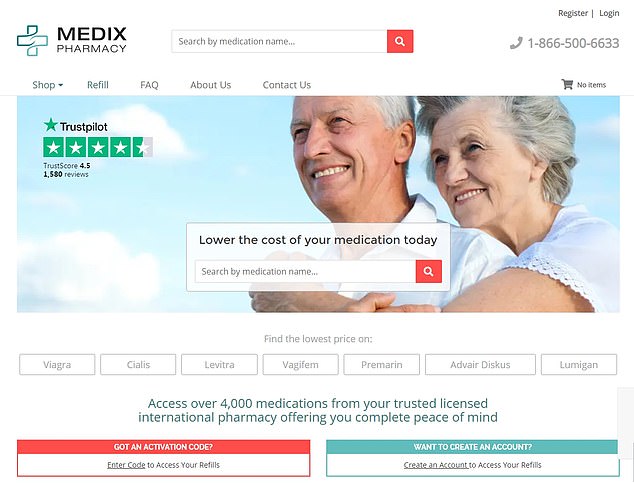 ACTION WILL BE TAKEN TO HELP PATIENTS HOOKED ON PRESCRIPTION DRUGS

Matt Hancock warned of a crisis of over-medicalisation, vowing to end it ‘once and for all’.

And in a victory for a Daily Mail campaign, an official review called for a national helpline and for guidelines on when doctors should intervene.

In the past year one in four adults has been given potentially addictive pills.

The review from Public Health England said 11.5million patients in England received at least one prescription in the past 12 months for drugs such as anti-depressants, sleeping pills, tranquilisers and opioid painkillers.

Half of those had been taking the pills for at least a year and between a quarter and a third for three years.

The problem often arises when patients are given painkillers after an operation or anti-depressants to cope with a bereavement. Some become hooked and have little support in breaking the habit.

Guidelines published earlier this year by the GPC tightened regulations on online prescribing of medicines which are considered dangerous, addictive or likely to be abused.

Detailed steps must be taken to check it’s safe for a patient to have them, that they actually need them, and that they are buying them for themselves.

The US has faced a devastating crisis of opioid addiction in recent years, with an estimated 1.7million people hooked on the painkillers in 2017.

In that year there were more than 47,000 overdose deaths caused by opioids – fentanyl is one which has proved particularly deadly.

There are fears something similar could happen in the UK and a study showed there has been an 80 per cent increases in prescriptions for the nerve pain drug gabapentin since 2013 on the NHS.

There have also been surges in prescriptions for oxycodone and pregabalin, dubbed the ‘new Valium’ in the UK.

‘We are continuing to work closely with other regulators involved in regulating online primary care services, governments and other stakeholders across Great Britain to improve the quality of care for patients online.’

A spokesperson for White Pharmacy said: ‘White Pharmacy is working with the General Pharmaceutical Council to make sure that it follows the new guidelines outlined in their recent publication, “Guidance for registered pharmacies providing pharmacy services at a distance, including on the internet.”’

MailOnline has contacted Medix Pharmacy and Pronto Healthcare for comment.