He is known for his friendship with Meghan Markle, but when it came to designing his new collection, Roland Mouret revealed it was the Princess of Wales he kept in mind.

The London-based French designer, 61, said Kate Middleton, 40, is a ‘powerful’ woman who has created a ‘sense of equality’ in hers’ and the Prince of Wales’ relationship.

Roland was behind the black and white dress the royal donned for the Top Gun Maverick premiere in London this May, in a bold look thought to be her most daring to date.

Now, speaking to The Sunday Times, the designer said he is proud that he is ‘able to do things that can help her’.

The London-based French designer Roland Mouret, 61, said Kate Middleton, 40, is a ‘powerful’ woman who has created a ‘sense of equality’ in hers and the Prince of Wales’ relationship. Pictured in London in March 2020

He added that he had designed his newest collection for Spring 2023 with the Princess in mind, and referred to a new orange short-sleeve dress he designed as ‘the Kate dress.’

Mouret, who is known for his seductive form-hugging numbers, added: ‘To make things that she feels protected in at that moment when the world is looking at her, I’ve done a little part in protecting her.’

Kate had stolen the show at the time of the Top Gun sequel’s premiere in the £2,700 Mouret evening dress, with her brunette locks swept back behind her ears so that her toned physique was front and centre.

The revealing number was thought to be a departure for Kate, who chose to wear more demure looks to movie premieres in the past.

Celebrity stylist Miranda Holder told Femail at the time that the dress was ‘distinctively more sultry’ than the looks we usually see on the mother-of-three.

The form-fitting dress highlighted the Duchess’s shape, and her sling back hair and cleverly applied body shimmer brought the attention to her toned arms and chiselled shoulders. 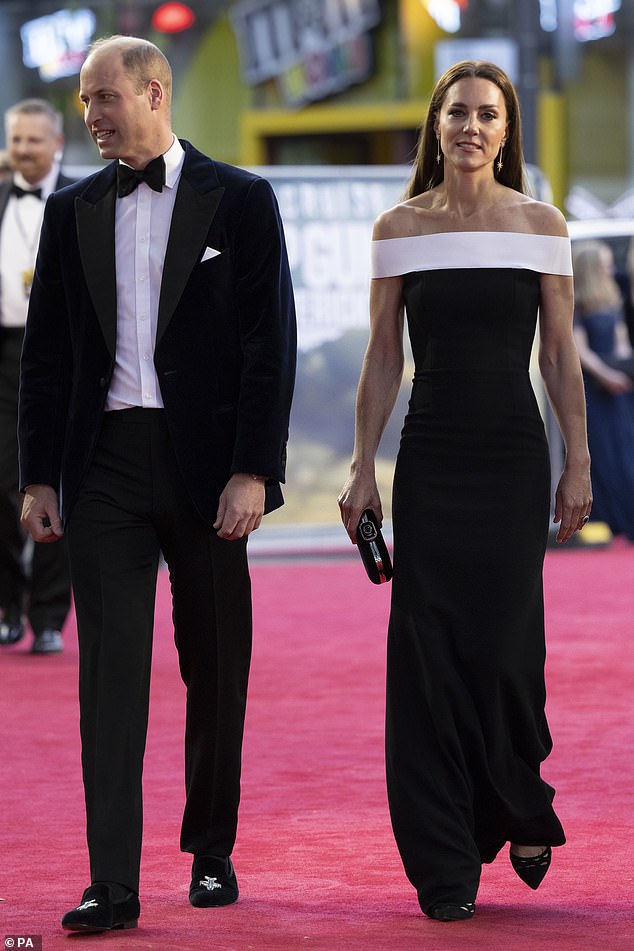 ‘It was a bold sartorial move, and the Duchess of Cambridge executed it to perfection,’ Miranda said.

The fashion was shocked when it was announced last November that Mouret’s brand was put in administration and that he had closed his Mayfair store.

The designer had to let go of his 80 workers in what was seen as an ‘abrupt’ collapse of his life’s work.

The closure and the brand’s dire financial situation were blamed on the Coronavirus crisis, which saw Mouret face cancellation after cancellation as the world shut down to see out the pandemic in 2020.

One former staffer, who declined to be named, explained: ‘Yesterday was a very emotional day for everyone. Roland Mouret is a family. We were all very emotional.

‘It happened yesterday. We were told in person, which was nice, but very painful to hear.

The dress the Duchess of Cambridge wore to the Top Gun: Maverick premiere in May, pictured, might have been her most daring look yet, a stylist has said

‘It’s a sad, sad story because it was lovely working here so people are very crushed.

‘We knew it might be coming because of the coronavirus. It’s nothing else but that.

‘We basically lost 95 per cent of the customers and revenue went down.’

Nearly a year on, it looks like Mouret has bounced back, with the help of Chinese entrepreneur and designer Han Chong, who saved him from administration.

Chong was credited for the success of his own brand Self-Portrait, which enjoys sells off more than £130 million and hopes to the same with Mouret’s label.

Jessica Chastain, Mila Kunis and Kate Hudson have all been seen in designs by the French-born designer at several premieres and events this year, proving that better days are ahead for Mouret’s brand yet.

He also revealed he has revised the overall aesthetic of his brand, which now retails at lower prices than in the past.

The goal is to appeal to a younger audience and to recreate the buzz surrounding  Mouret’s Galaxy Dress, which was a fashion must-have in 2005, sported by everyone, from Victoria Beckham to Beyoncé, and which sold out without months of being rolled out at Harvey Nichols.