A roller derby competitor who sexually assaulted and bit a woman during a wild, naked hot tub party has walked free from court.

Jennifer Marie Petersen, 31, of Gladstone, in Park – 15kms northwest of Melbourne – was drunk when she attacked the women.

She faced up to 10 years in prison for her debaucherous antics, which went from consensual kissing to sexual assaults.

Jennifer Marie Petersen, 31, of Gladstone Park bit women on the neck during a wild, naked hot tub party in Brunswick. She faces up to 10 years in jail

County Court of Victoria Judge Gavan Meredith on Tuesday convicted and sentenced Peterson to a two-year community corrections order and ordered she perform 200 hours of unpaid work and attend treatment and rehabilitation for alcohol and mental health issues.

Peterson made a hasty retreat from the court on her release, with several of her supporters seen remonstrating with a press photographer.

The court had heard Peterson went to a pub in Fitzroy on December 4, 2016.

After the drinks, she went a woman’s home.

Peterson had been drinking since midday by the time the party moved to the rear of a Brunswick property, where some women present stripped off.

There, Peterson participated in drinking games and a game of ‘truth, dare or pash’ with naked women in one of the two hot tubs.

The court heard the woman ‘pashed’ several of the women before Peterson began to straddle her.

The woman pushed Peterson off her repeatedly before the player began to berate her.

Some women jumped out of the spa and continued to dance naked around the place.

Once alone, Peterson attacked, launching herself onto her hapless victim and biting her on the neck and upper body.

The woman kissed Peterson in the hope she would stop biting her but she continued to grope at her.

The court heard Peterson forcefully touched the woman’s genitals as she tried to struggle free.

She then berated her victim again before consoling her when she broke down in tears.

Not content, Peterson then jumped into the other hot tub where she sexually assaulted another woman.

She then tried to kiss another woman, who had not had a drink.

Peterson then grabbed her genitals.

When friends asked her to leave, Peterson refused.

Police caught up with the roller girl just days before Christmas where she refused to co-operate. 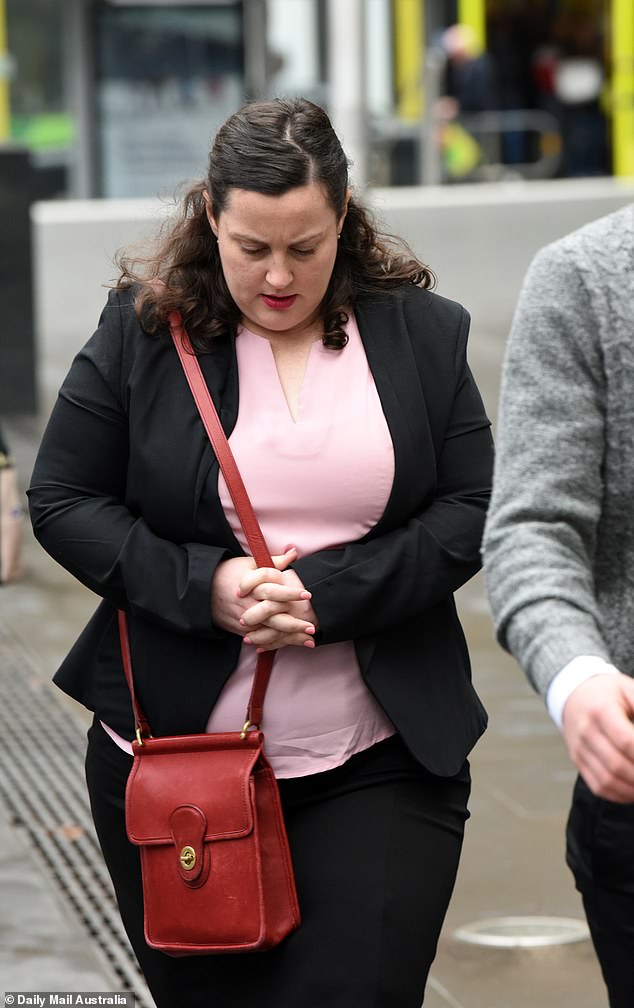 Jennifer Marie Petersen, 31, of Gladstone Park will be sentenced next week over her outrageous antics

Text messages taken from her phone revealed Peterson was aware she had ‘pashed’ some girls, but she couldn’t remember who or how many.

One of her victims told the court she had been left traumatised by Peterson’s attack.

The woman said she felt she had been taken advantage of and had since struggled with self-confidence, self-esteem, shame and helplessness.

He told Judge Meredith that the house party had been ‘tactile’ with a lot of naked bodies in spa baths, naked dancing and girls kissing.

‘It’s clear her abuse of alcohol has led her to commit these offences,’ he said.

He asked Judge Meredith to release his client on a community corrections order and not convict her in the hope she could continue working with children as a swim coach.

He said the charges had seen her lose friends and her job.

‘You could hardly punish her more than she’s already been punished,’ Mr McMahon said.

‘I’m not so sure of that Mr McMahon,’ Judge Meredith replied.

Crown prosecutor Kevin Doyle said while the evening may have been ‘sexualised’, it also had boundaries.

‘They felt they were in a safe space … boundaries were crossed,’ he said.

Judge Meredith said a conviction was necessary to ‘mark the seriousness of (her) offending’.