Rolls-Royce has finally taken the wraps off its first fully electric car as the sleek and silent Spectre goes on sale from today to super-rich customers who want to be greener.

The new Spectre – which has undergone thousands of miles of testing under a camouflage skin disguise – has a mighty 577 horsepower (430kW) with two electric motors – one driving each axle – propelling the near 3 tonne vehicle from 0 to 60mph in just 4.4 seconds and up to a top speed expected to be limited to 155mph.

But it also has a significant full-charge range of up to 320 miles – enough to drive from London to just north of Newcastle, with zero-emissions from the tailpipe  – although it will use plenty of energy potentially created with fossil fuels elsewhere to do that journey.

The new Rolls-Royce Spectre is its first ever fully electric car, designed for super-rich customers who want greener luxury

Although exact prices have not yet been announced, the company says Spectre will be priced between the Cullinan 4×4 and flagship Phantom models.

But as customers rarely buy any new Rolls-Royce without adding significant personal touches and extras, they will typically be spending in excess of £400,000.

The two-door four-seater fastback is Rolls-Royce’s most aerodynamic motor car ever and has a presence and size similar to that of the petrol powered Wraith coupe, which it is described as the ‘spiritual successor’ to.

It means the luxury marque with its famous Spirit of Ecstasy is now also embracing the Spirit of Electricity – with an eye-catching modern interior to electrify potential customers. 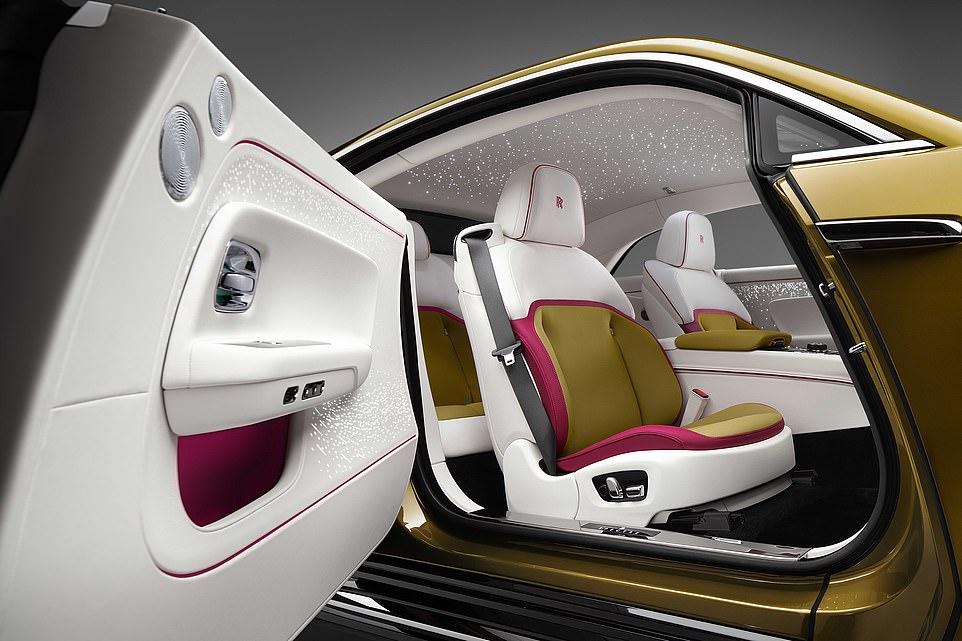 Climb in: The Rolls Royce Spectre’s huge rear-opening doors will make getting into the back of the two-door car simple

The Spectre has been extensively tested – from the frozen landscapes around the Arctic Circle in Northern Sweden, where I had a ride, to warm weather testing in South Africa and the Cote d’Azur – on a 1.5million mile programme around the globe, simulating the equivalent of 400 years of use to hone its version of Rolls-Royce’s hallmark ‘magic carpet ride’.

Described as the world’s first ultra-luxury electric super coupé, bosses said Spectre heralds the beginning of a new all-electric era for Rolls-Royce Motor Cars and ‘demonstrates how perfectly Rolls-Royce is suited to electrification’.

Sleek Spectre: The two-door four-seater fastback is Rolls-Royce’s most aerodynamic motor car ever 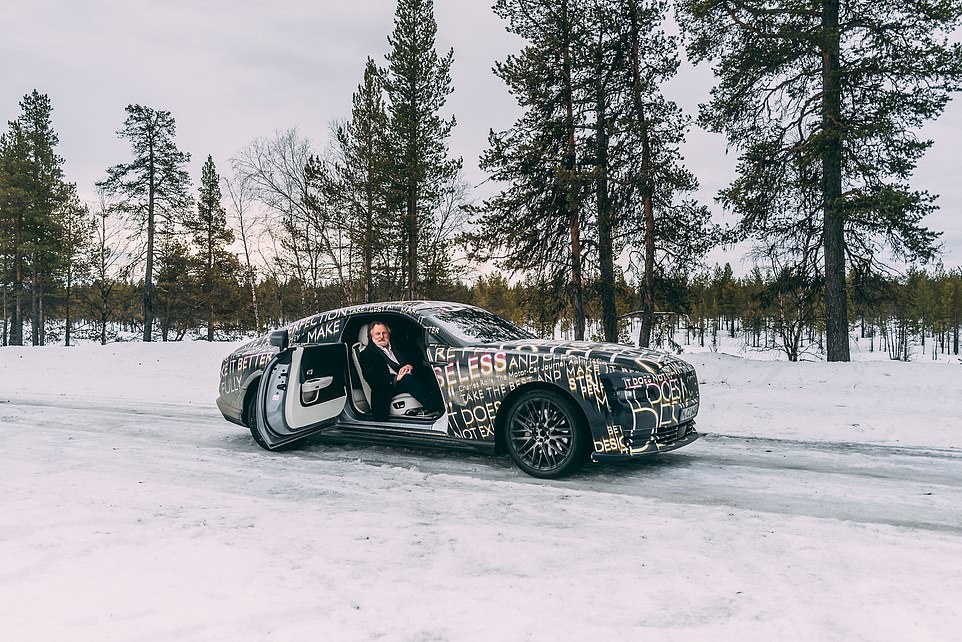 Icebreaker: Rolls-Royce took the Spectre to the Arctic Circle for testing, where Ray Massey played it cool for a ride

By 2030 its entire product portfolio will be fully electric, Rolls-Royce confirmed.

With all the engineering work electronic software in place, they have been ‘teaching’ the new Spectre to be a true Rolls-Royce.

But Rolls-Royce says its cars are perfectly suited to battery power and that in 1900 co-founder, the Honourable Charles Rolls – who bought his own early electric car – forecast a future for a quieter and greener motor car.

Rolls said at the time, also perhaps anticipating range anxiety: ‘The electric car is perfectly noiseless and clean. There is no smell or vibration. They should become very useful when fixed charging stations can be arranged.’

More than 120 years later, bosses say the time has come for Rolls-Royce to fulfil the prophecy of its founding father. 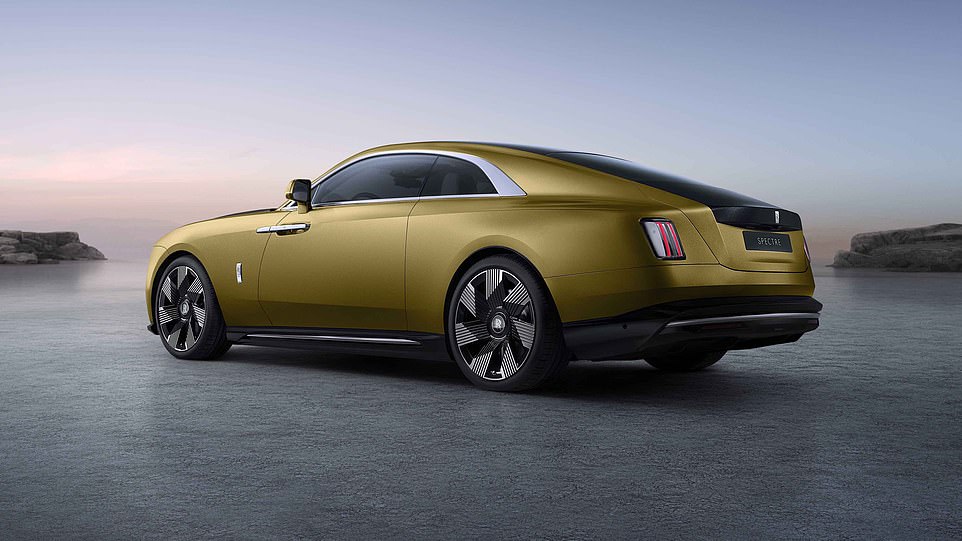 The driver’s Rolls-Royce: Like the previous Wraith Coupe, the Spectre will be aimed at Rolls-Royce’s customers who choose to drive themselves 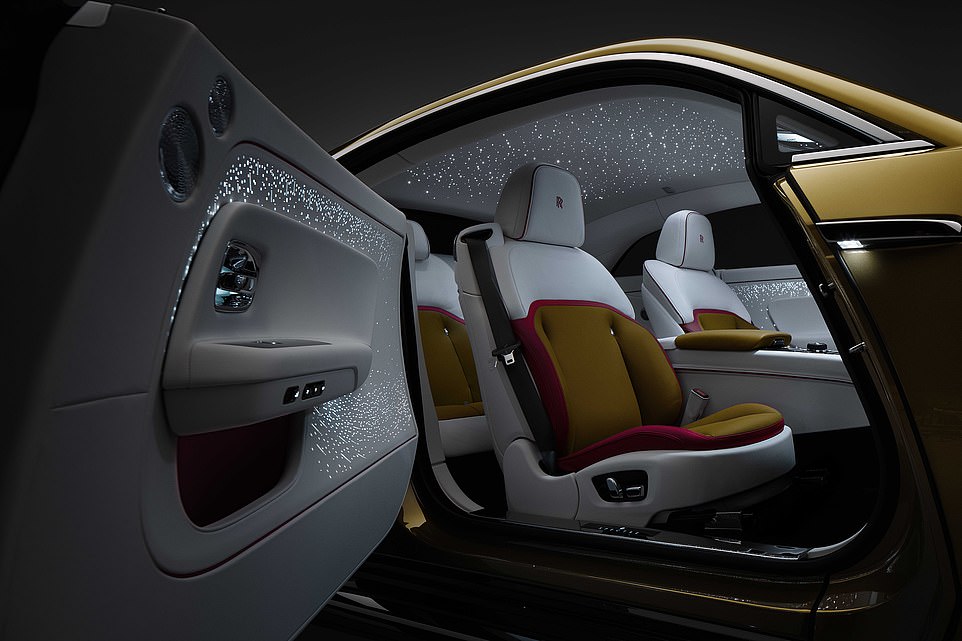 Star car: Inside the Spectre will offer luxury and Rolls-Royce’s famed ability to almost limitlessly customise a car’s interior

It added: ‘Spectre is more than a motor car. It is a statement of intent and a symbol of a bright, bold future as Rolls-Royce progresses into an all-electric era.

‘This commitment to an all-electric powertrain will only enhance the Rolls-Royce experience – instant torque, silent running and the sense of one imperceptible gear have defined the characteristics of an extraordinary canon of products dating back to the very first Rolls-Royce, the 1904 10 H.P’.

Rolls-Royce Motor Cars is based at Goodwood near Chichester in West Sussex and employs more than 2,000 people at its boutique factory there.

‘This is the start of a bold new chapter for our marque, our extraordinary clients and the luxury industry. For this reason, I believe Spectre is the most perfect product that Rolls-Royce has ever produced.’

He added: ‘This incredible motor car, conceived from the very beginning as our first fully-electric model, is silent, powerful and demonstrates how perfectly Rolls-Royce is suited to electrification.

‘Spectre is a Rolls-Royce first and an electric car second.’ 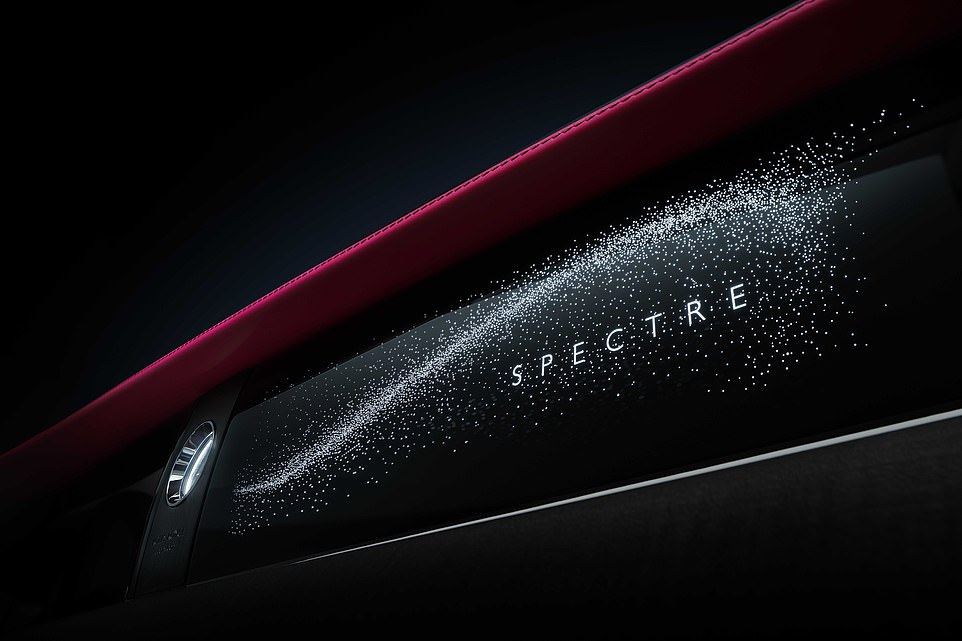 Silent Spectre: A Rolls-Royce is traditionally whisper quiet inside and the new electric powertrain will help this effect 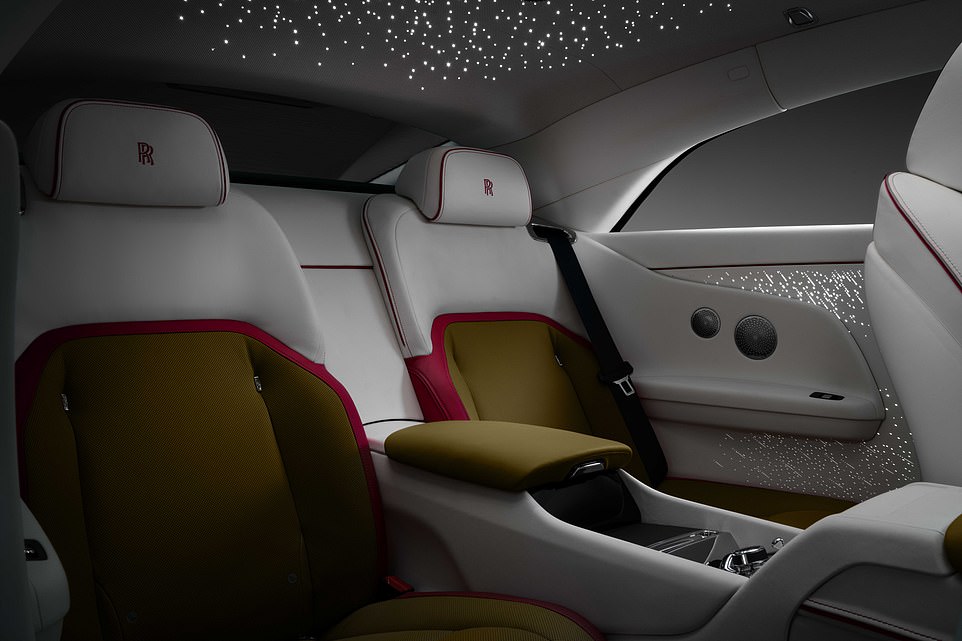 Room to relax: Rear seat passengers in a two-door Rolls-Royce need not fear that they will be squashed in – they get a similar level of luxury to those in the front

Rolls-Royce points out that its links with electrification hark back more than a century to its founders, but that the technology required for an electric production model was not right – until now.

Henry Royce began his working life as an electrical engineer and dedicated much of his career to creating internal combustion engines that simulated the characteristics of an electric car – silent running, instant torque and the sensation of one endless gear.

Charles Rolls drove a 1900 electric car named the Columbia, he made a prophecy: ‘The electric car is perfectly noiseless and clean. There is no smell or vibration. They should become very useful when fixed charging stations can be arranged.’

In 2011, Rolls-Royce tested a fully electric Experimental Phantom named 102EX. This was followed by a dramatic design study called 103EX.

In September 2021, the company confirmed that it had commenced testing Spectre, it first all-electric Rolls-Royce. Today, 18 October 2022, it has launched its first pure electric car. 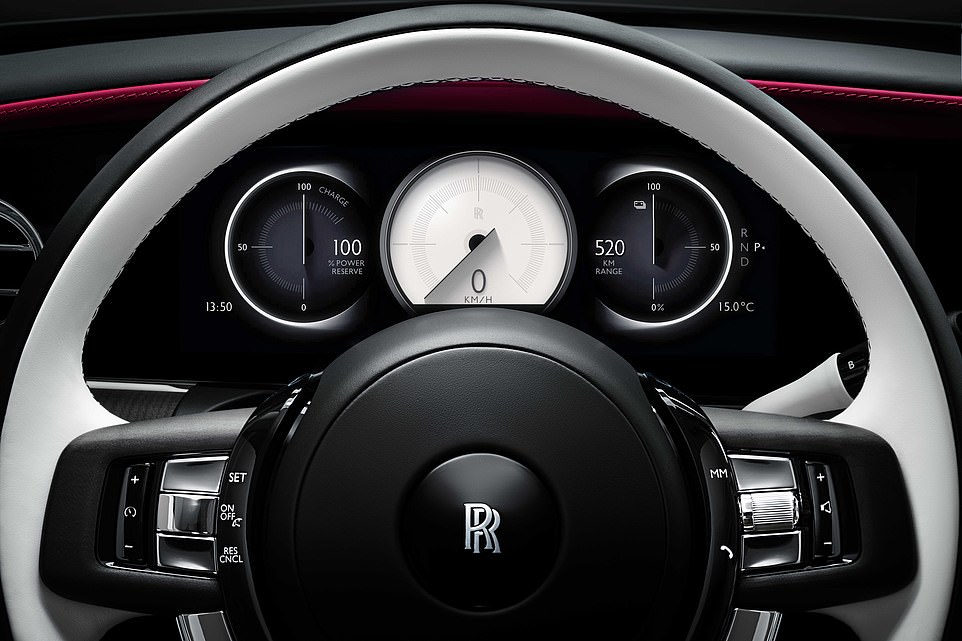 The art of simplicity: Behind the Spectre’s dashboard sits a clean set of dials showing charge, speed and range

Rolls-Royce Spectre: Will it fit in my garage? 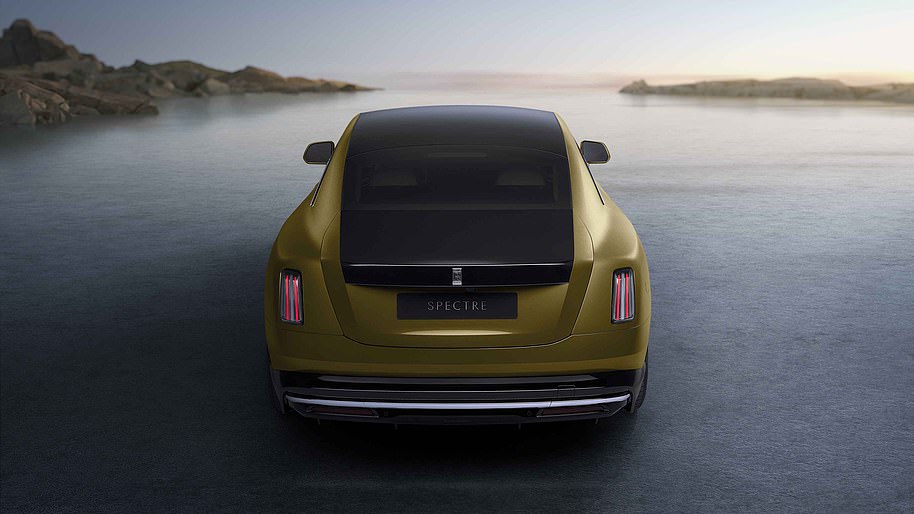 No price has been revealed for the new Rolls-Royce Spectre but with typical customer options it is likely to set people back £400,000