Archaeologists have uncovered a rock-hewn ‘dining room’ in the ‘House of Muses,’ an excavation site in southeast Turkey that dates to the 2nd or 3rd century BC, when Asia Minor was under Roman rule.

After early field work in the 1990s, excavations of the ancient city of Zeugma, now modern-day Gaziantep, began in 2004.

‘In the mosaic found in this house, goddesses and personifications believed to contribute to Greek literature, history, poetry and music are depicted.’

After excavating some 50 feet of dirt on the site, Görkay has discovered two rock chambers in the house he believes were ancient dining rooms.

The rooms were adorned with elaborate mosaic floors and ‘show traces of the intellectual life of its owner at that time,’ he told the paper.

At its height Zeugma had some 80,000 inhabitants but the house probably belonged to a family ‘having better than the middle-class economy,’ Görkay said, with multiple courtyards where dinner parties would have been held and basins would have collected rainwater.

Strategically located near both the Taurus Mountains and Euphrates River, Zeugma was originally founded by the Greeks in 300 BC, when it was known as Seleukia-on-the-Euphrates.

One of Alexander the Great’s generals, Seleucus I Nicator, constructed the first bridge over the Euphrates there.

In approximately 64 BC, it was conquered by the Romans, who renamed it Zeugma, after the Greek name for the ‘bridge of boats’ that crossed the Euphrates there. 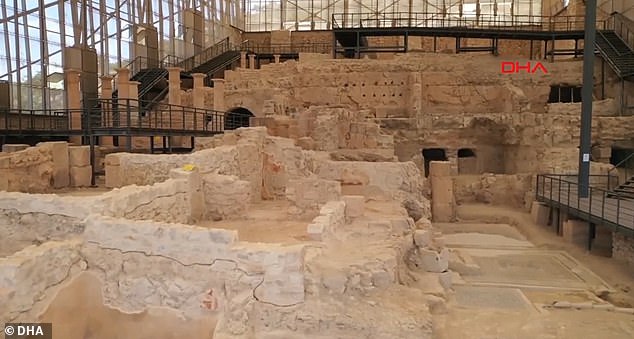 The rooms, with elaborate mosaic floors, were uncovered by archaeologists after shoveling through 50 of soil during the ongoing excavations in the southeastern Turkey’s Gaziantep province 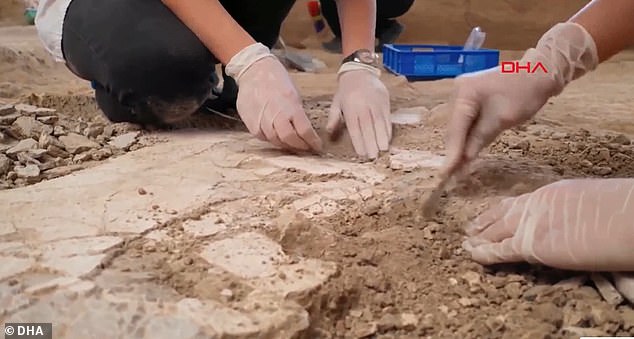 Work on excavating the rock-cut rooms at Zeugma has paused while archaeologists address some ‘risky cracks’ with protective measures, including ‘injections or steel structures’ 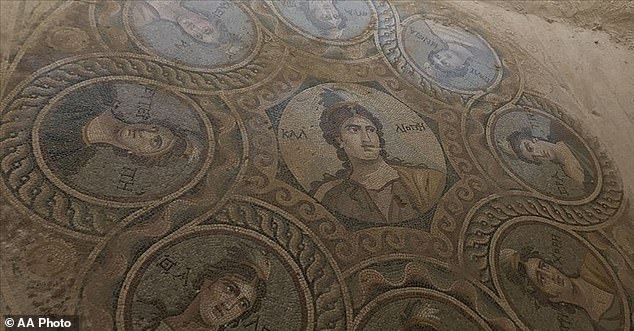 Zeugma was ‘one of the most important cities in Anatolia, especially on the Eastern Roman border,’ Görkay said, referring to the half of Turkey on the Asian continent, also known as Asia Minor, which was claimed by the Roman republic in 129 BC.

Roman rule of Anatolia continued after the rise of the Roman Empire in the first century BC, until shortly after the sacking of Rome in 410 AD. 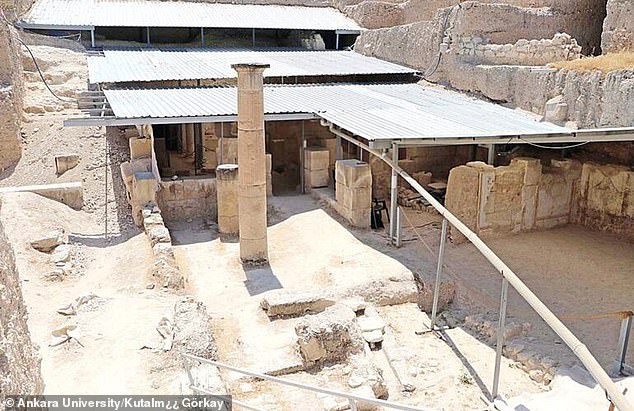 After safety concerns are addressed and the excavation is completed, the stone-carved ‘dining rooms’ will be opened to visitors

Work in the chambers has paused, as Görkay’s team works to shore up a series of ‘risky cracks’ they identified on the ceilings, but they hope to complete the excavation later this year.

Protective measures, including ‘injections or steel structures’ will ensure the site is safe when the rooms are eventually opened to the public.

Numerous other mosaics, frescos and architectural details have been found in the area, with many pieces on display at the Zeugma Mosaic Museum, which has the largest collection of mosaics in the world.