The scion of the Romanov dynasty Prince Rostislav has tied the knot to his Greek property consultant girlfriend in a lavish ceremony in Paris. The great-great-nephew of the last tsar of Russia, 34, married his partner Foteini Georganta, with whom he shares a son, eight, called Leon, in a white tie ceremony in France on Saturday. 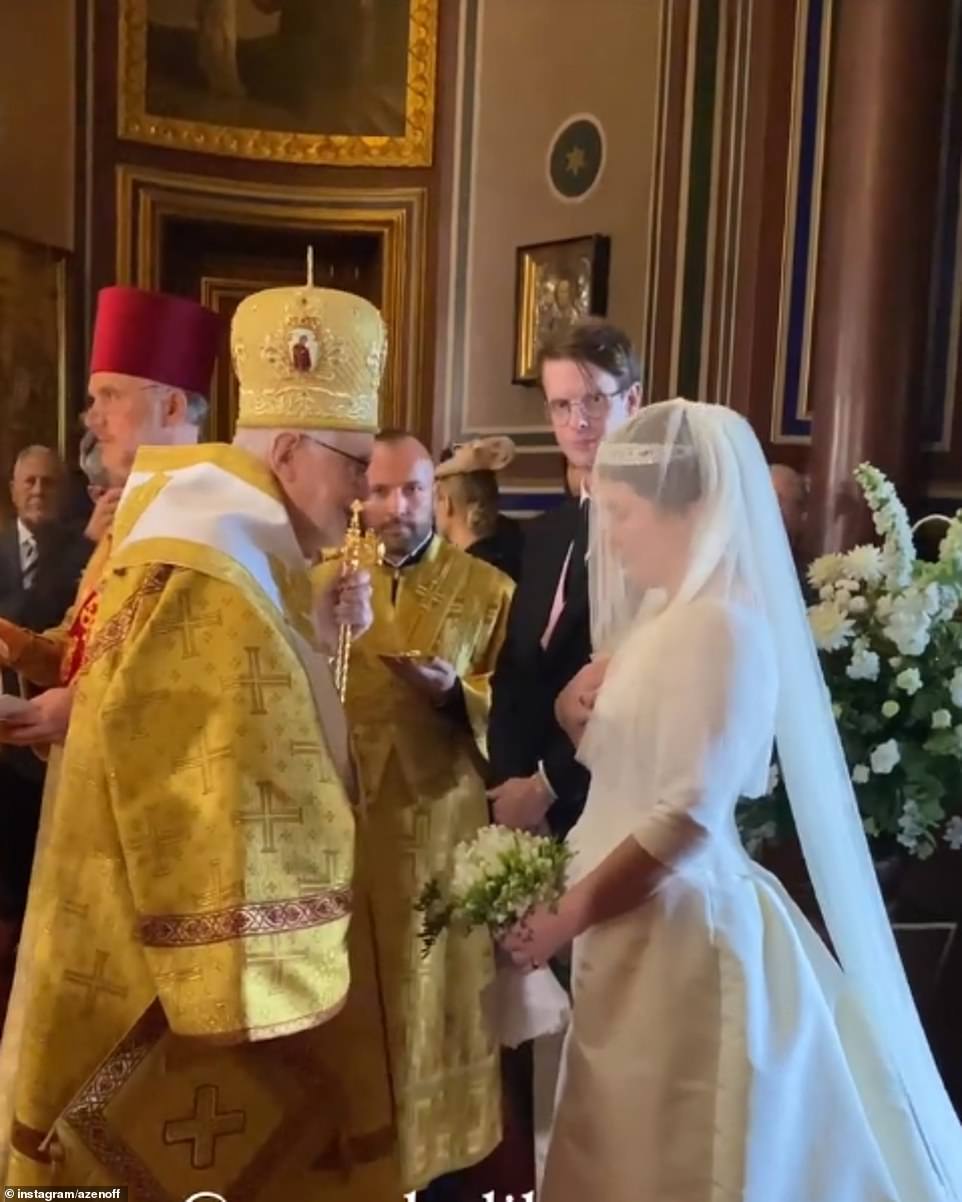 The artist wed his property consultant fiance at the Russian orthodox Alexander Nevsky cathedral in the city, before throwing an ultra-luxurious reception at a hotel nearby. 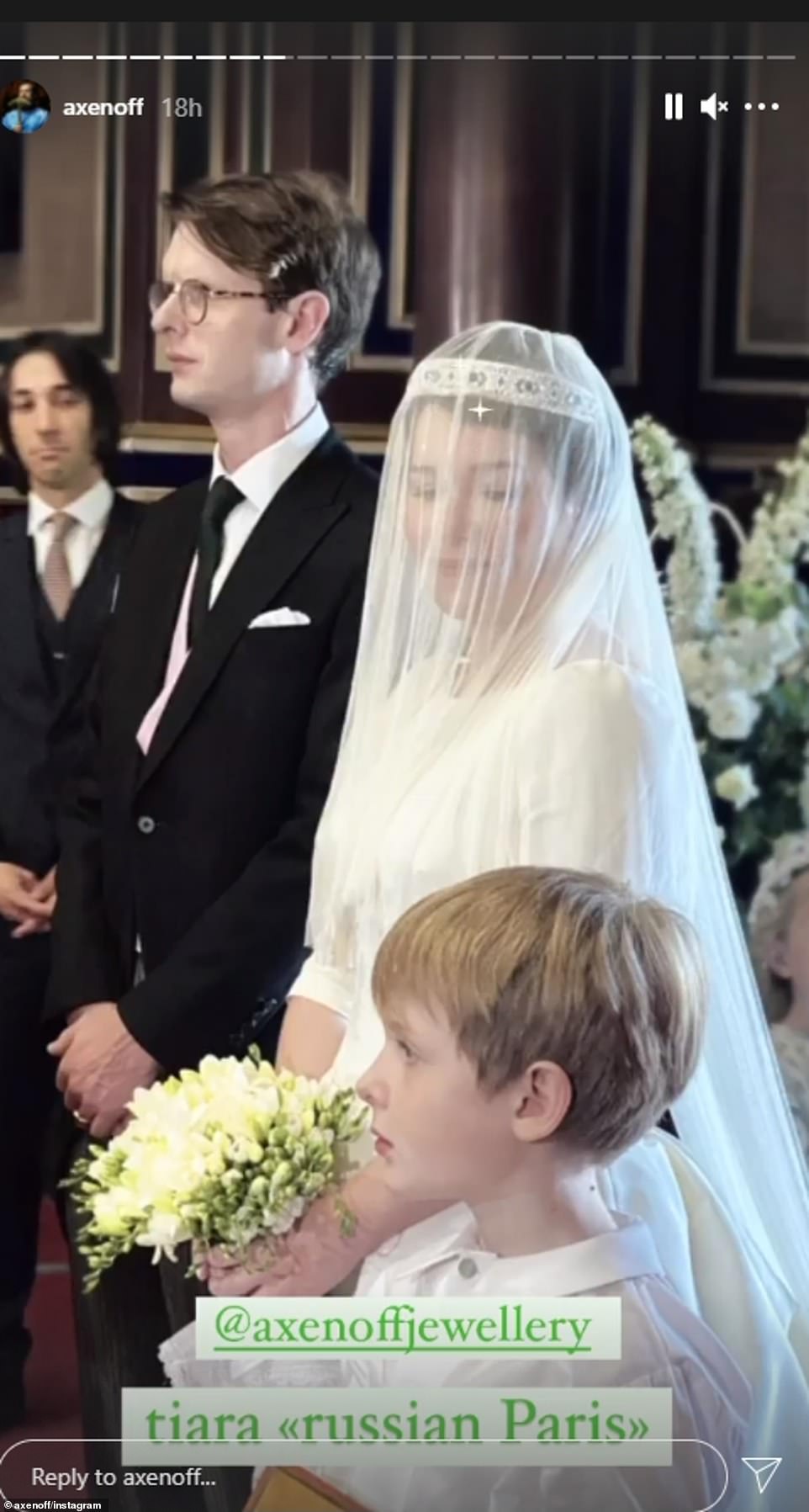 Snaps shared online of the event show the bride in a floor length white satin gown and a custom made tiara from Russian jewelry label Axenoff. 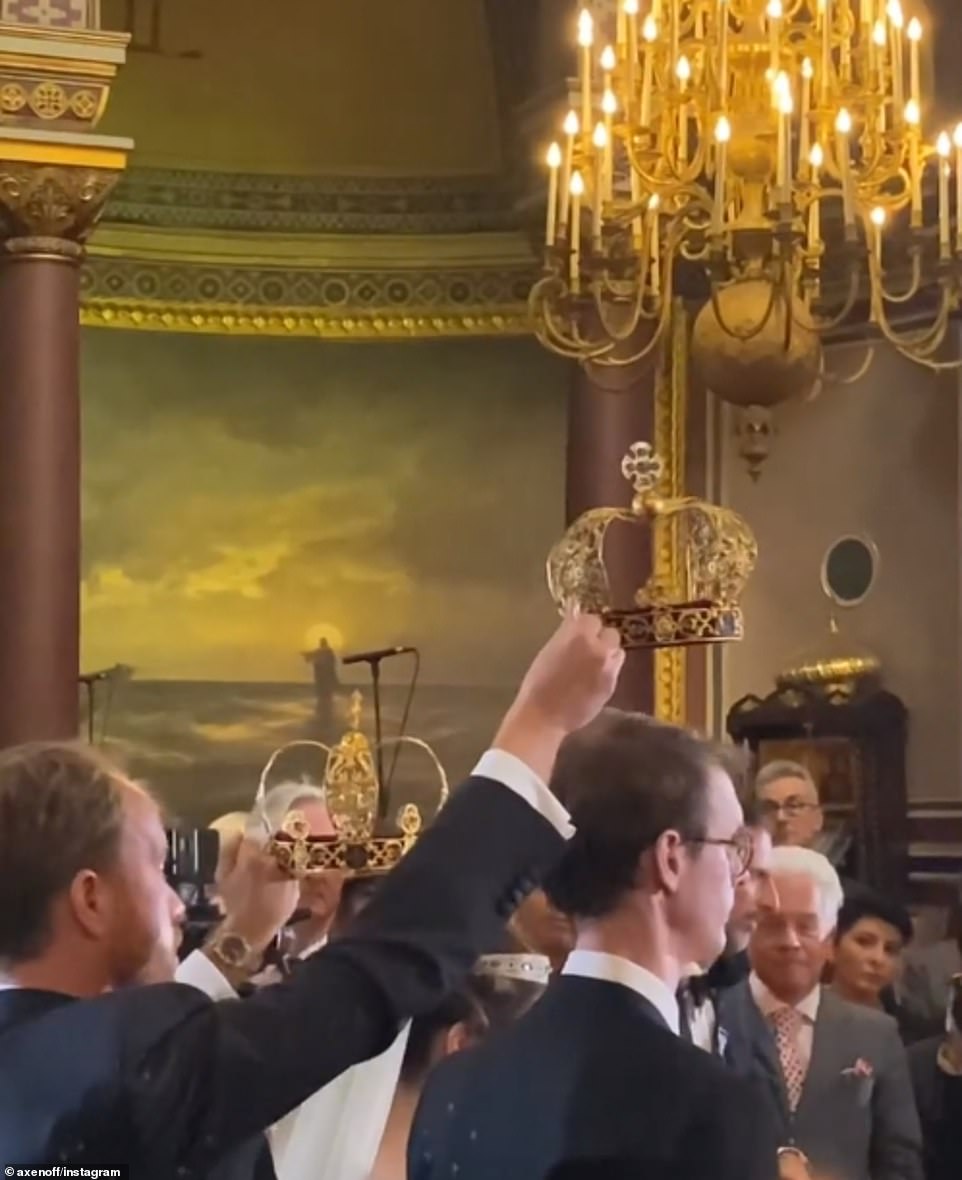 The couple were married in the orthodox ceremony in the cathedral, which is famously where Picasso married his first wife Olga Khokhlova. At one stage of the ceremony, priests held golden crowns above the bride and grooms heads as they were formally wed. 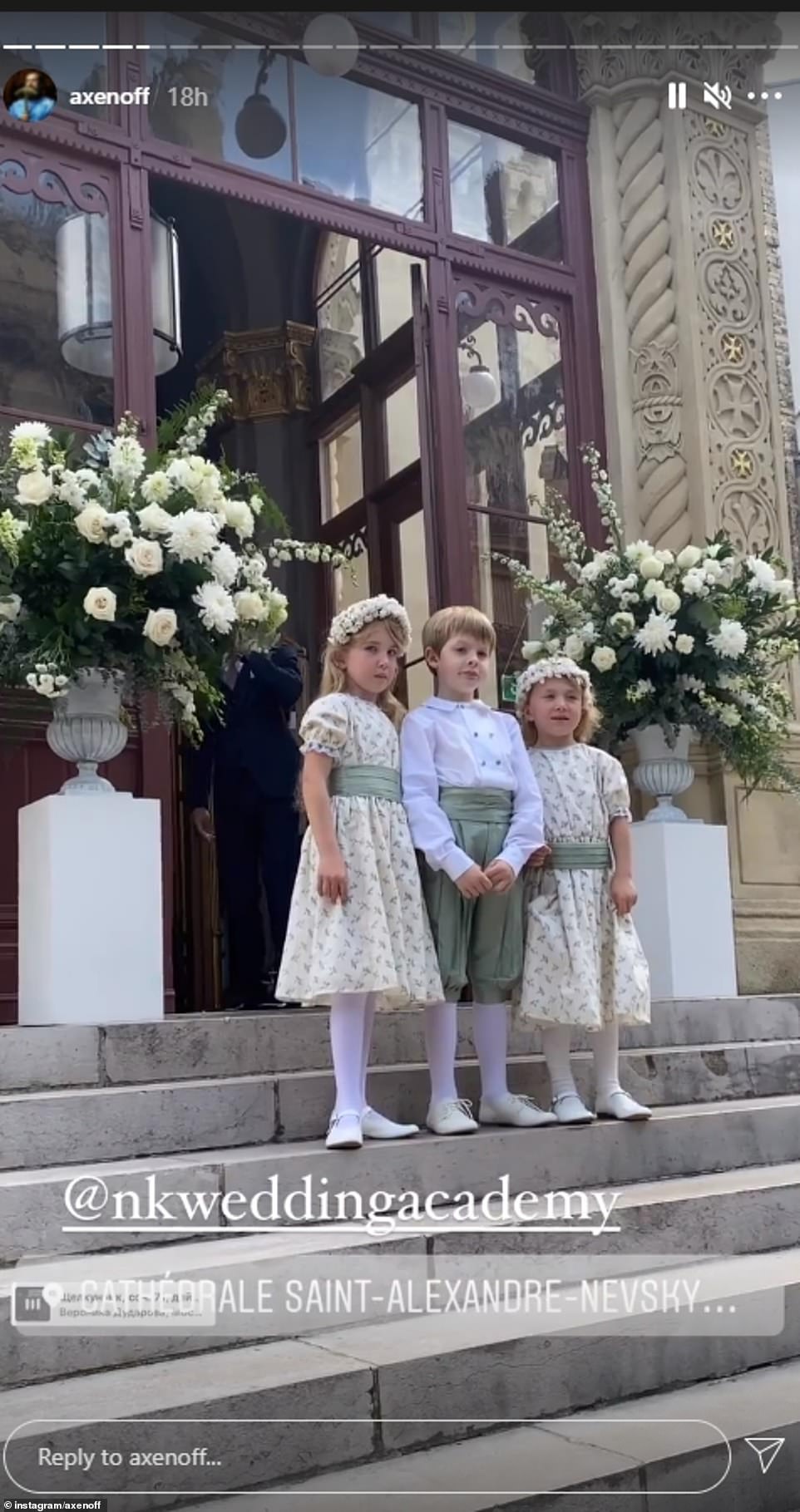 A host of flower girls and page boys donned white and green outfits for the occasion, and could be seen following the bride into the church. 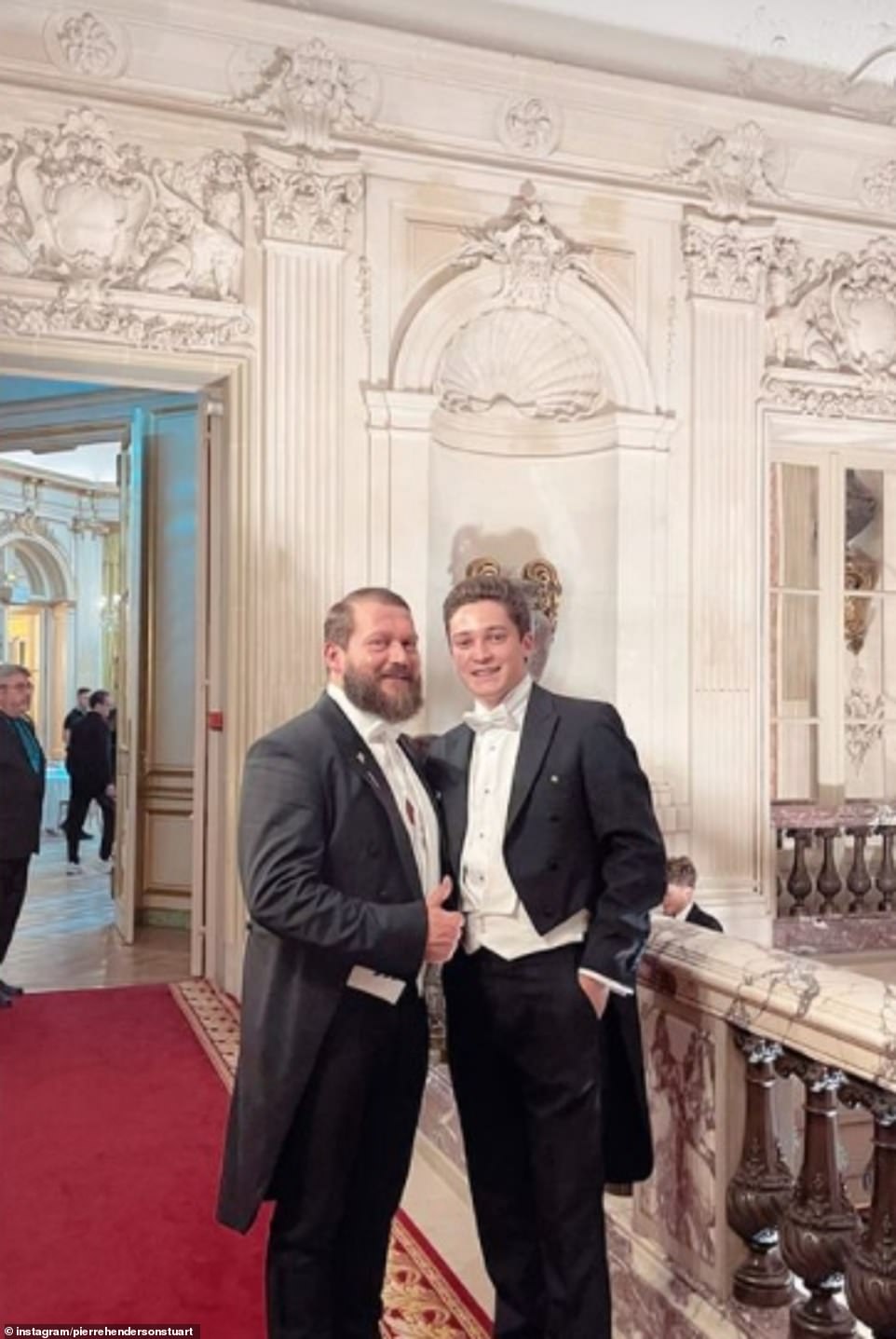 Later, guests in white tie tuxedos and tails treated to a lavish wedding reception at a hotel in Paris. 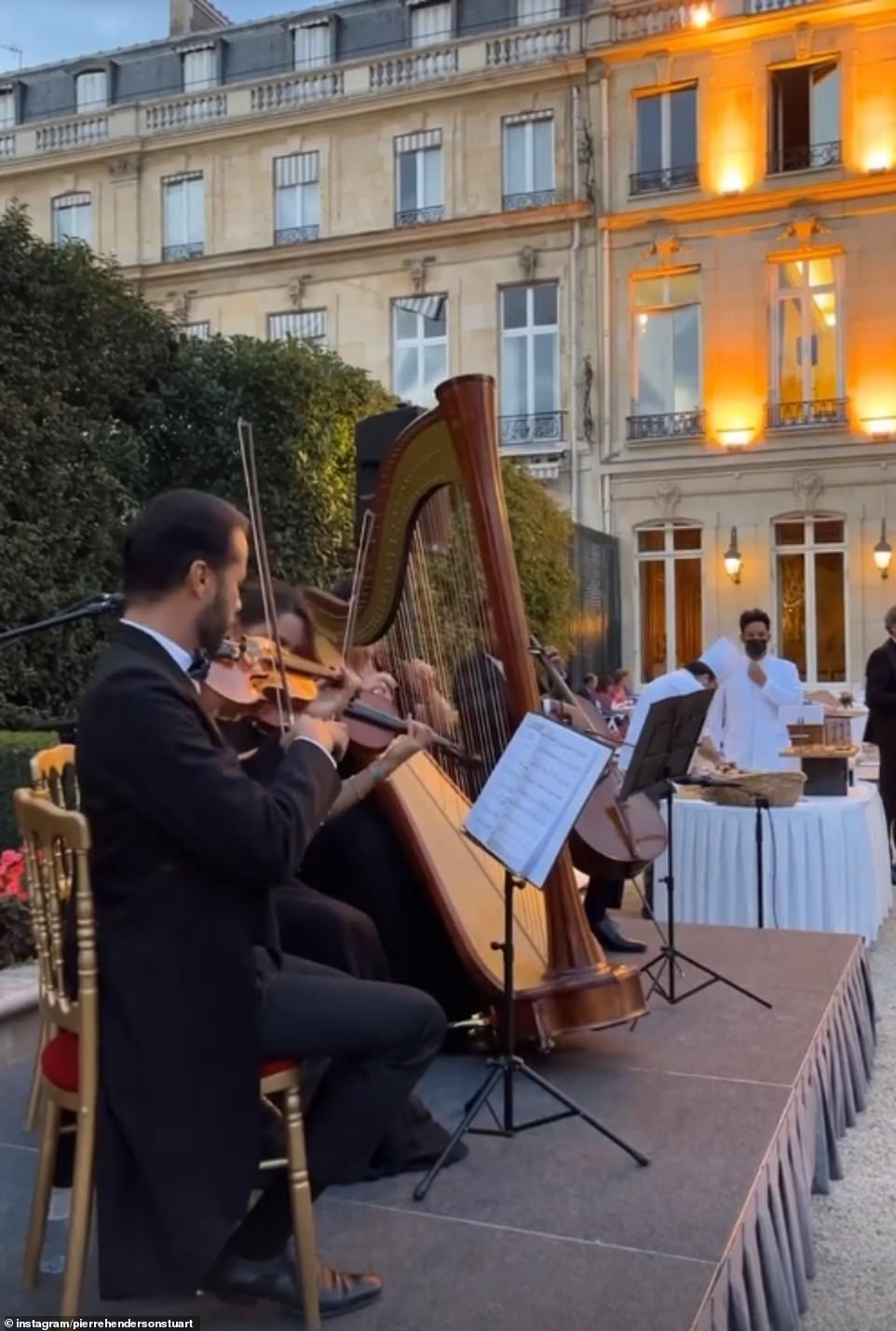 Attendees were serenaded by a group of musicians including a harpist while enjoying cocktails in the grounds of the grand house. They were then invited to dine on tables covered in white flowers and greenery. 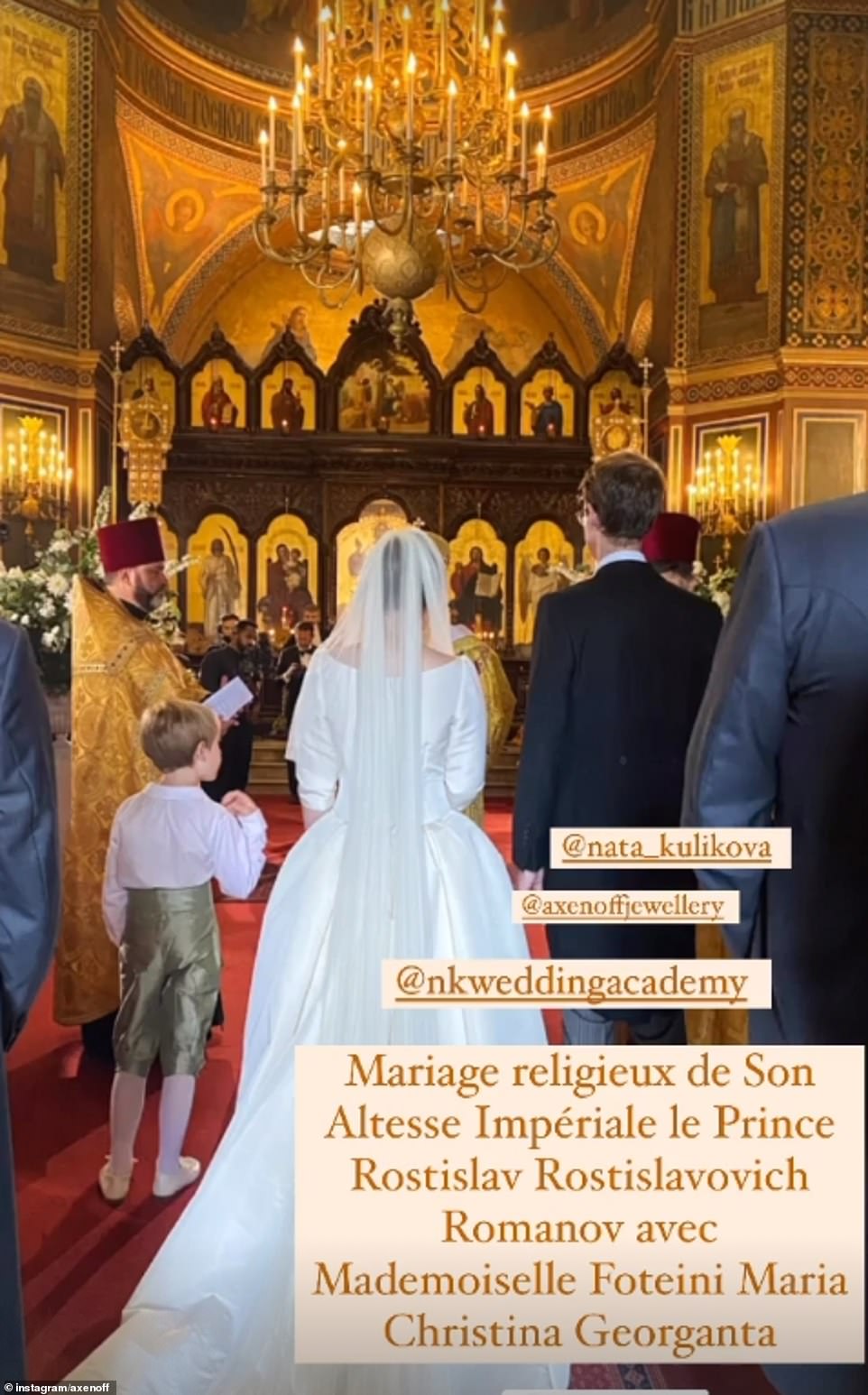 Pictured: The back of the bride’s simple white satin dress. 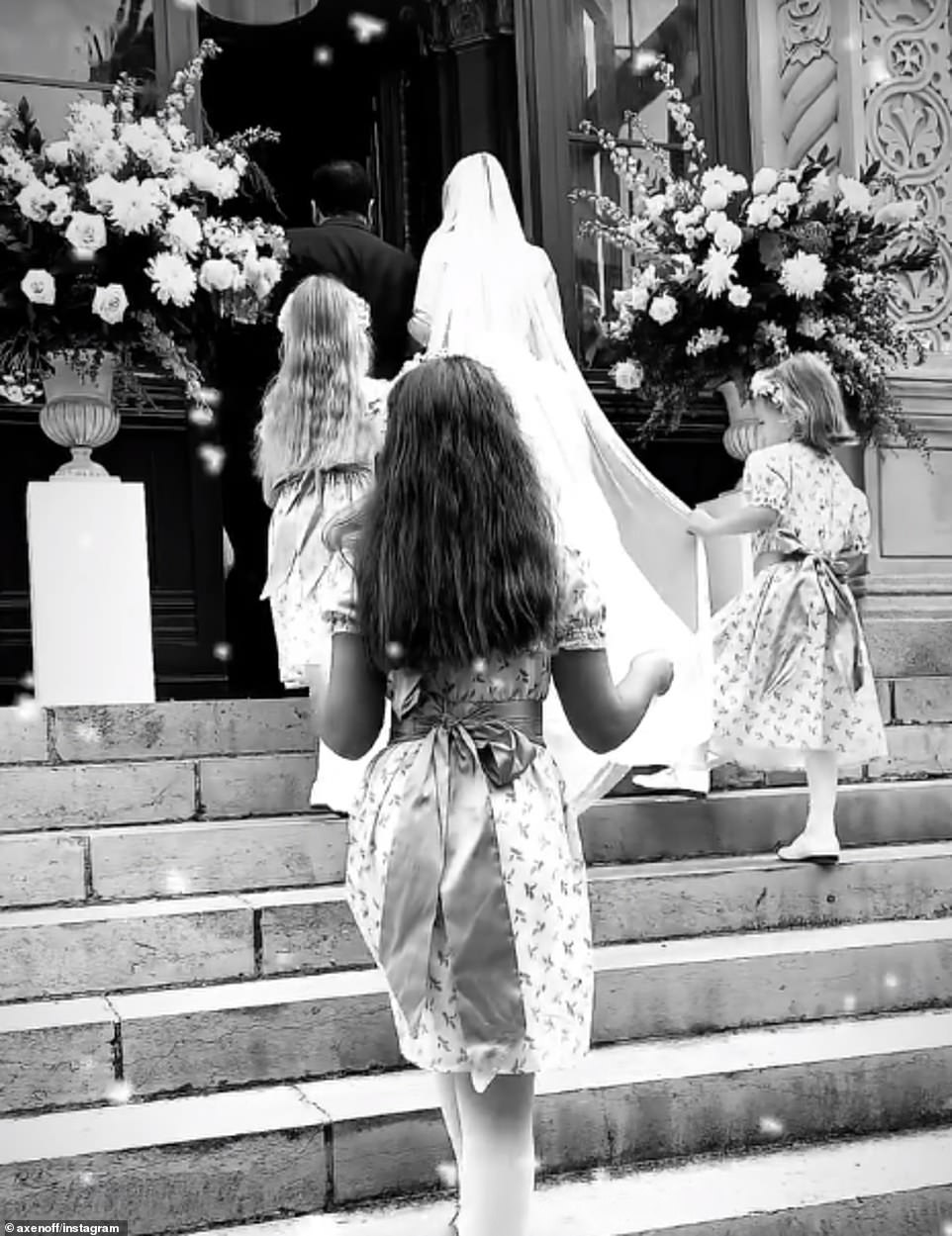 The bride’s lengthy veil was carried by flower girls into the event. 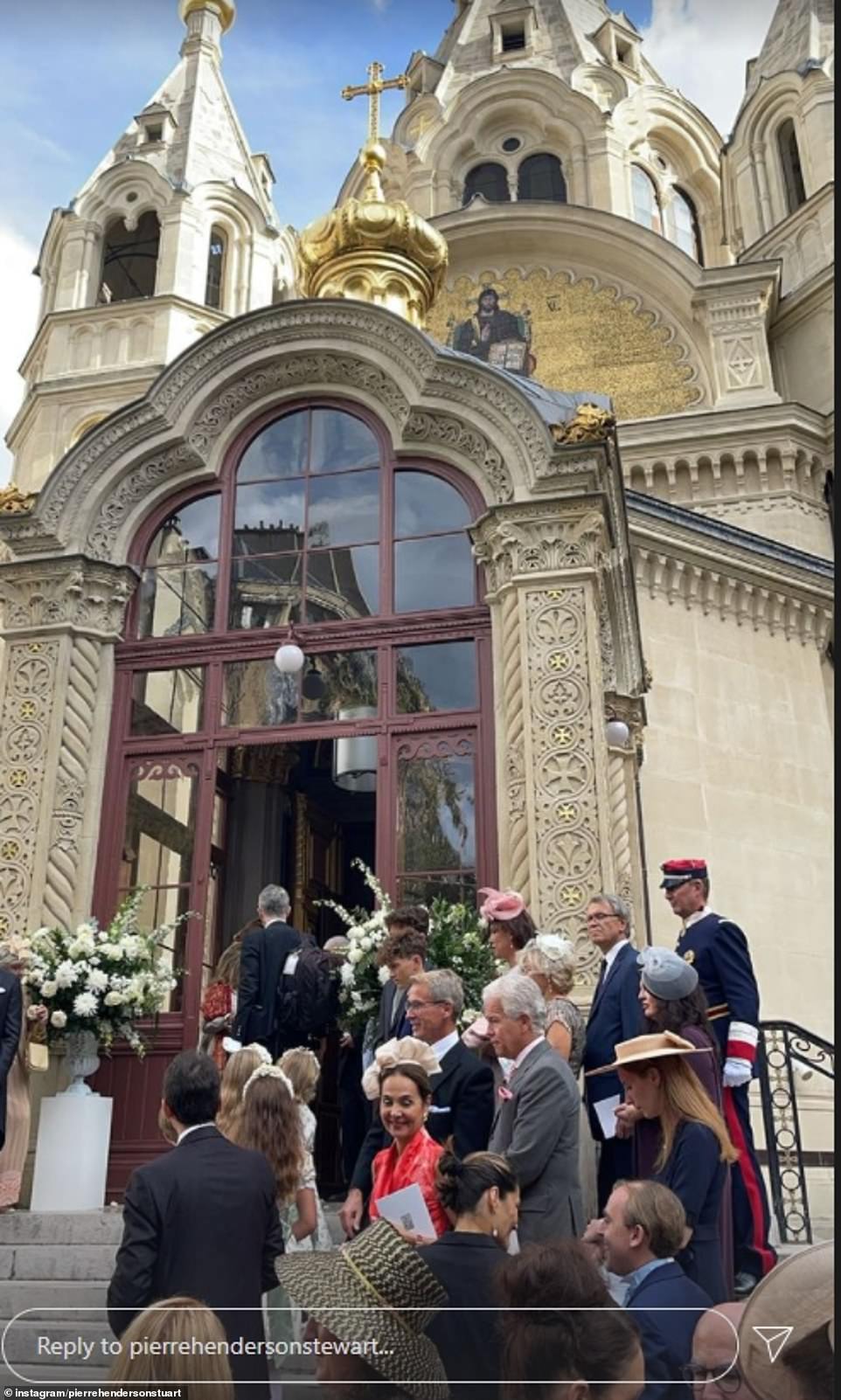 Later, guests gathered outside the cathedral in Paris as they waited the arrival of the newlyweds (pictured). 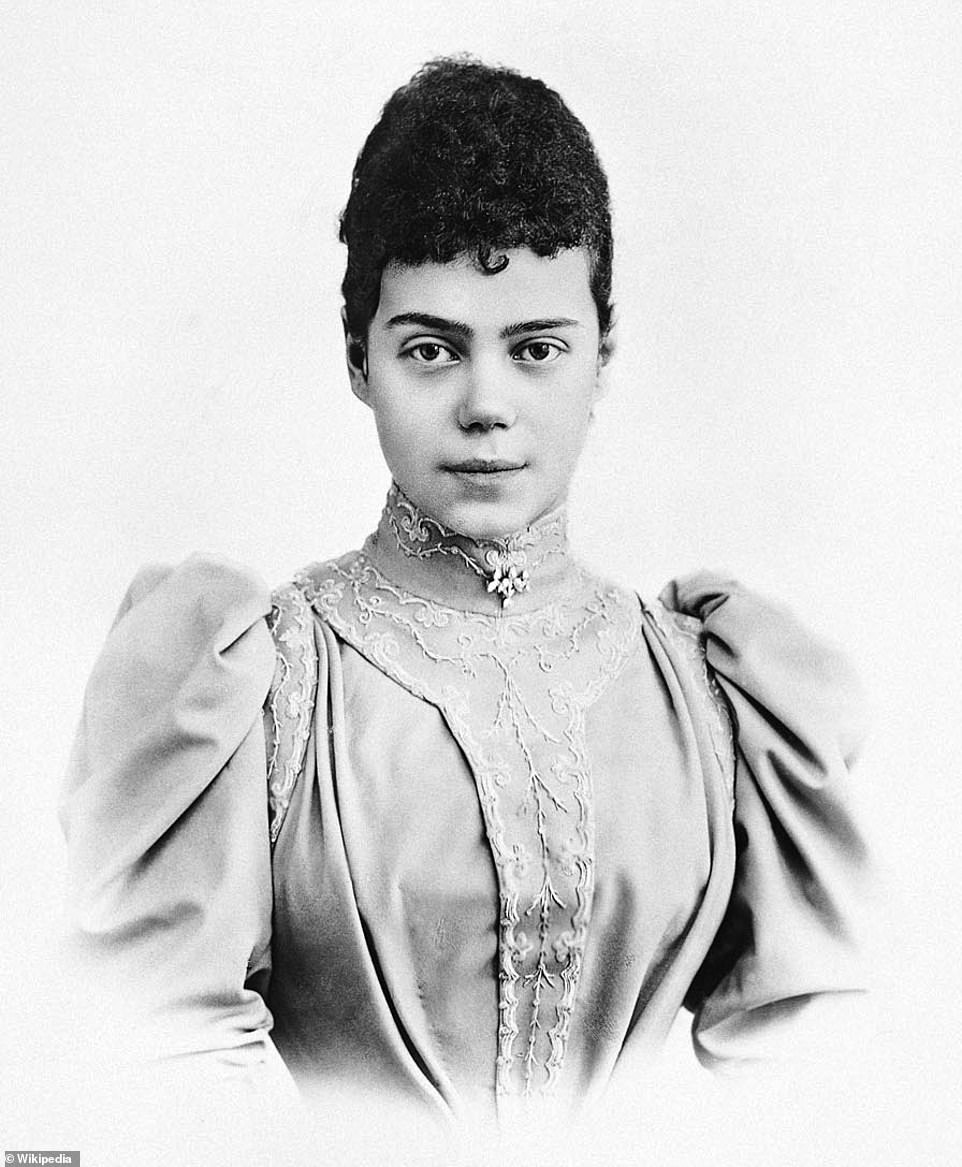 Prince Rostislav’s great-grandmother was Grand Duchess Xenia, the sister of Nicholas II, the last tsar of Russia. The Romanovs enjoyed a life of seemingly endless prosperity and ruled of a sixth of the surface of the Earth in the early 20th century. Nicholas II ruled from 1894 until he was forced to abdicate after the February Revolution of 1917. He and his family were imprisoned by the Bolsheviks and executed the next year. It was a time of social upheaval, war and brewing discontent that would ultimately lead to the fall of the 300-year-old Romanov dynasty. 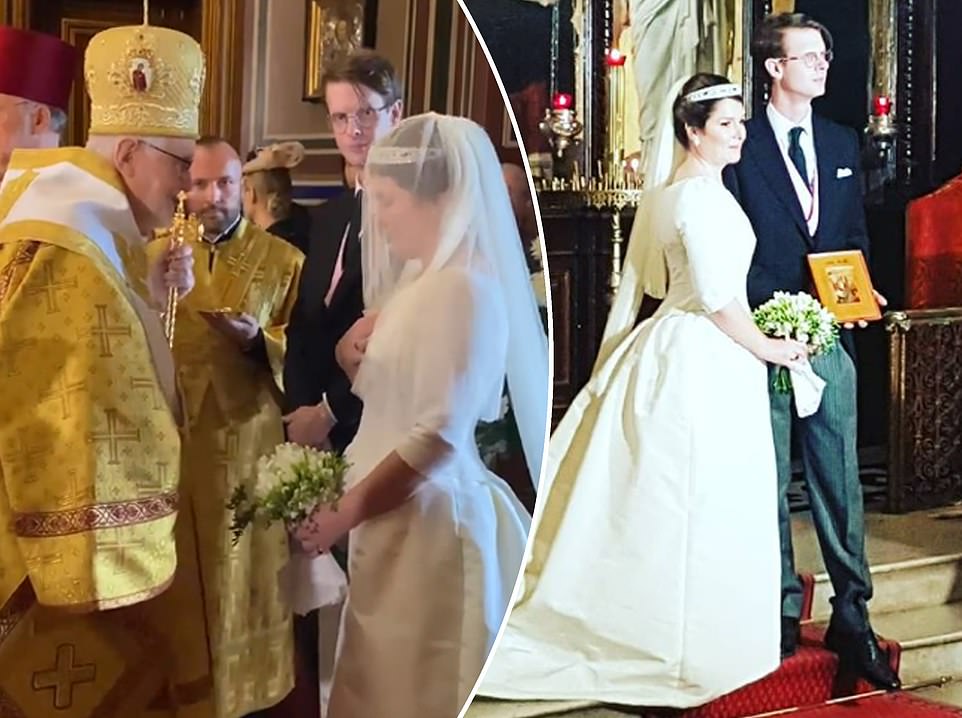 While his heritage is steeped in Russian history, the prince first visited the country in 1998 for the Nicholas’s funeral, held 80 years after his death. Rostislav, known as Rosti, was born in Chicago in the US, with his parents moved to London where he grew up. The prince previously told lifestyle website Russia Beyond that he identifies as both Russian and British, ‘the best of both countries.’ 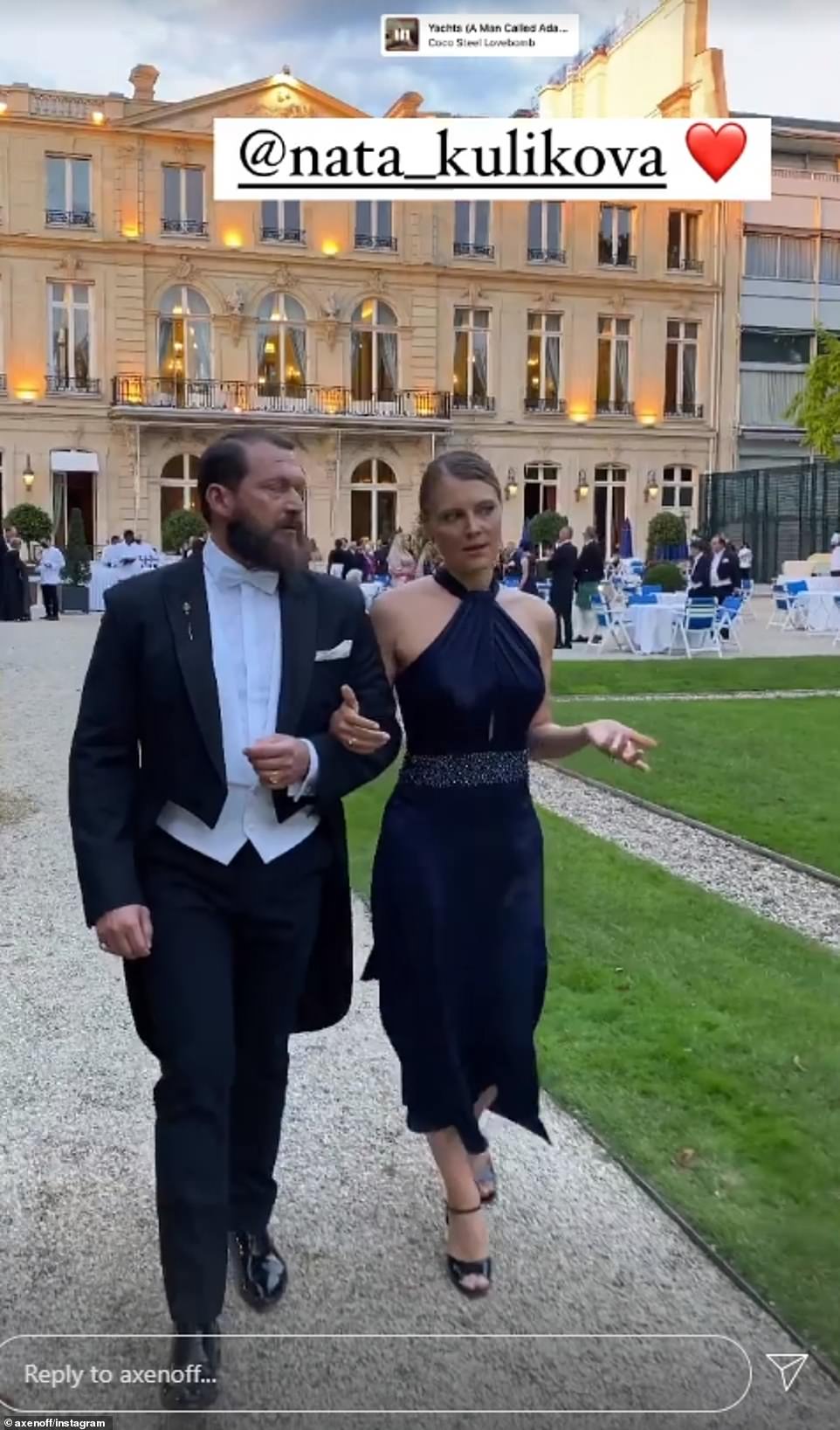 The family moved to Rye, where they settled in an 18th-century home. He was later educated at a private school in Dorset. He visited Russia for the first time as a 13-year-old to attend the re-interment of Tsar Nicholas II’s remains. Pictured: Guests stroll around the wedding venue. 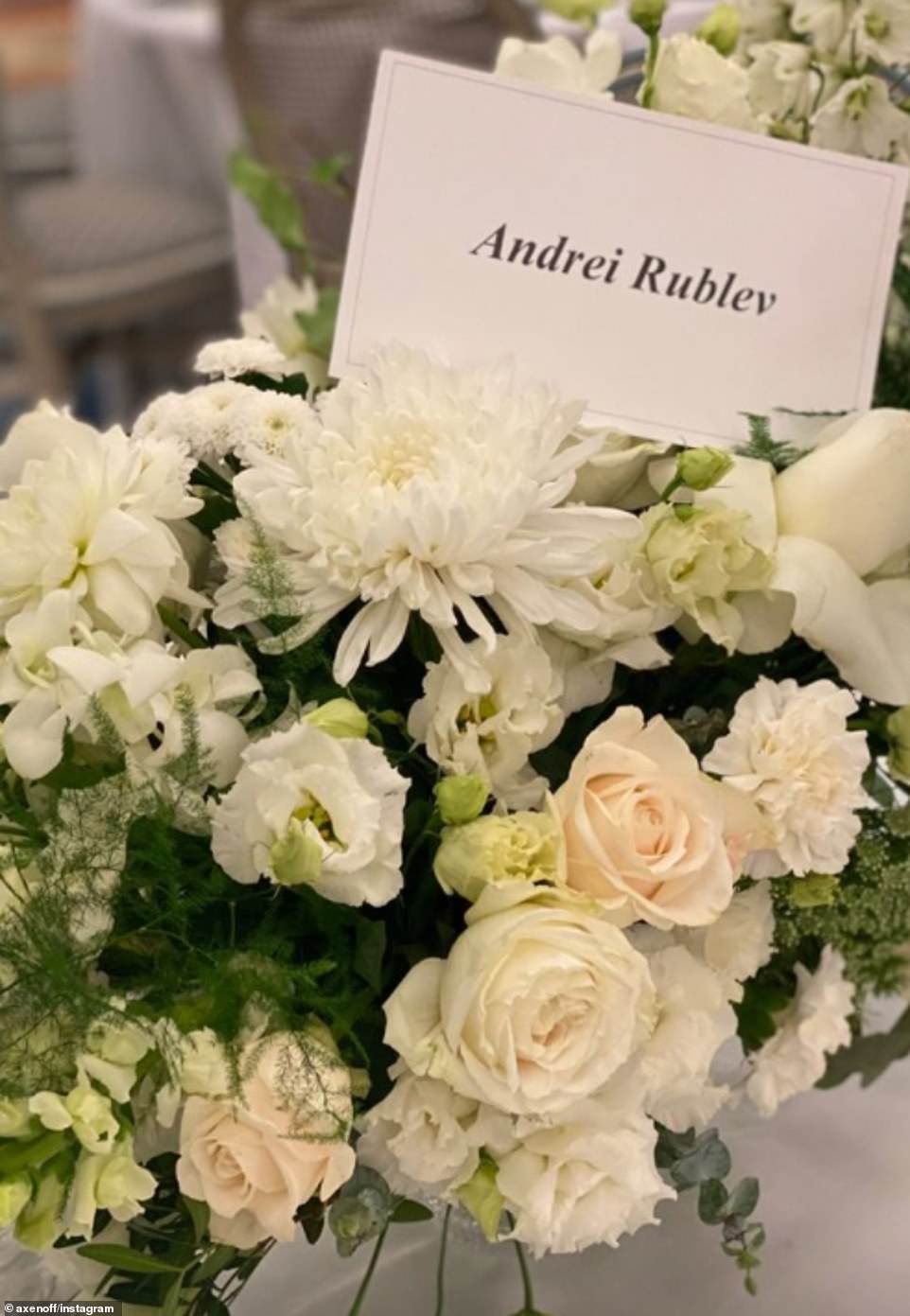 However it was not long after the trip that Rosti’s father fell sick and ultimately passed away in 1999. Rosti took the role as head of the household, telling Tatler he felt he needed to be strong at the time. Pictured: The tables were decorated with white and green flowers. 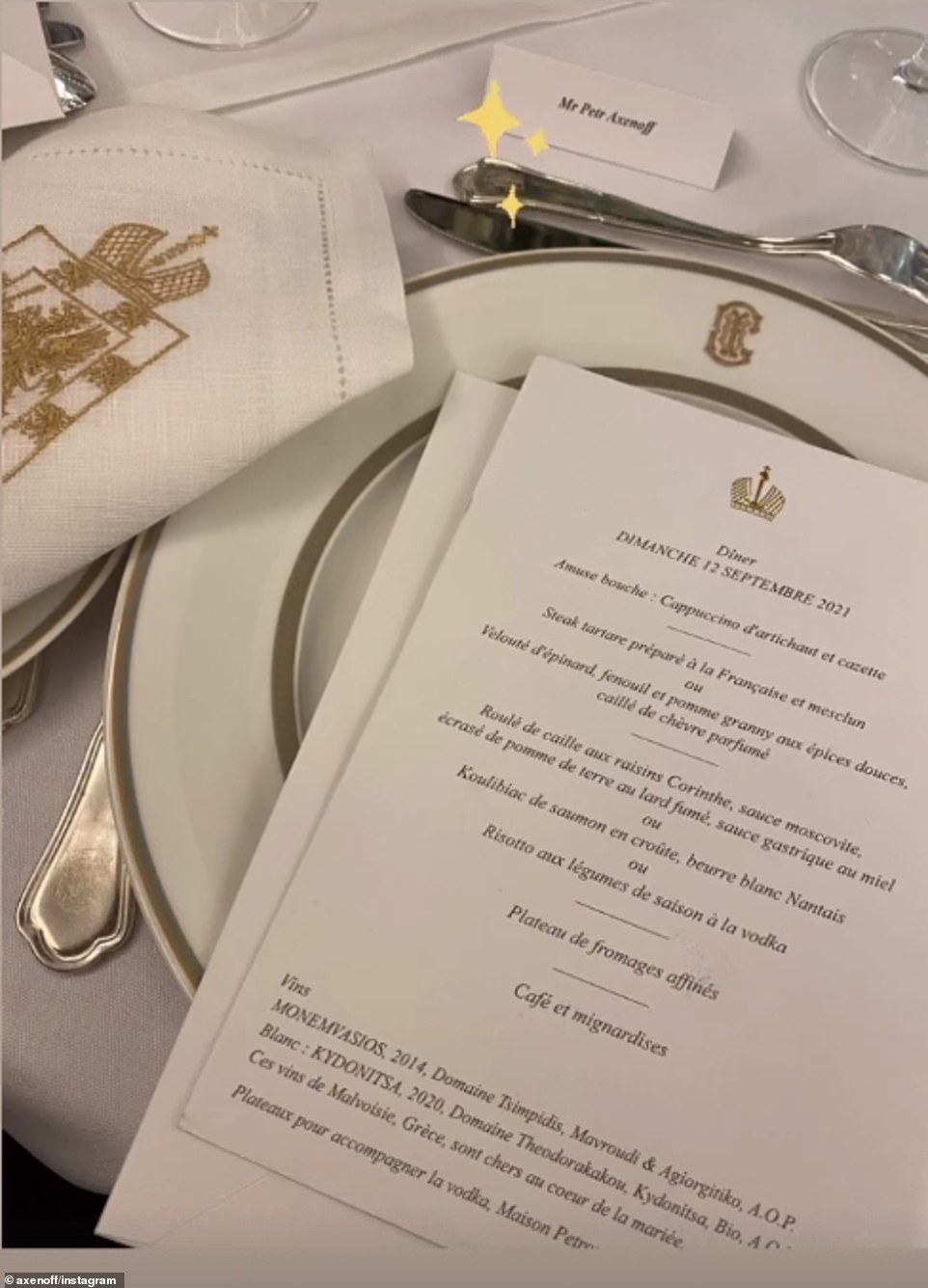 Those attending the event dined on steak tartar and salmon en croute. The menu is pictured here. 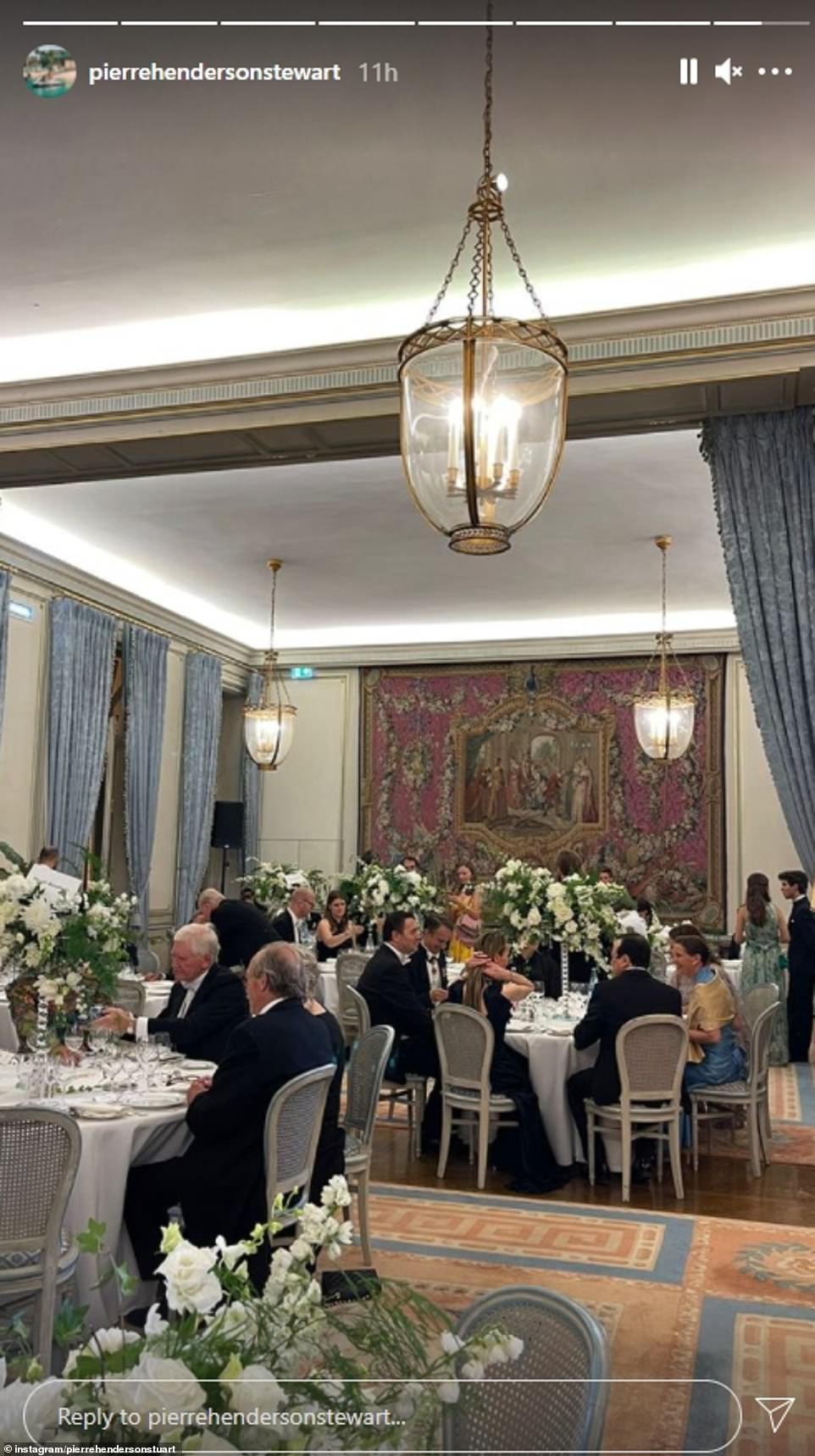 Speaking to Tatler in 2018, Rosti said: ‘I never showed my emotions to my family because I thought emotions were weak.’ He began challenging his feelings into art, thus beginning his career as a painter. He now tours the world with his art and has held exhibitions for his paintings in galleries and event around Europe and the U.S. Pictured: The venue reception hall. 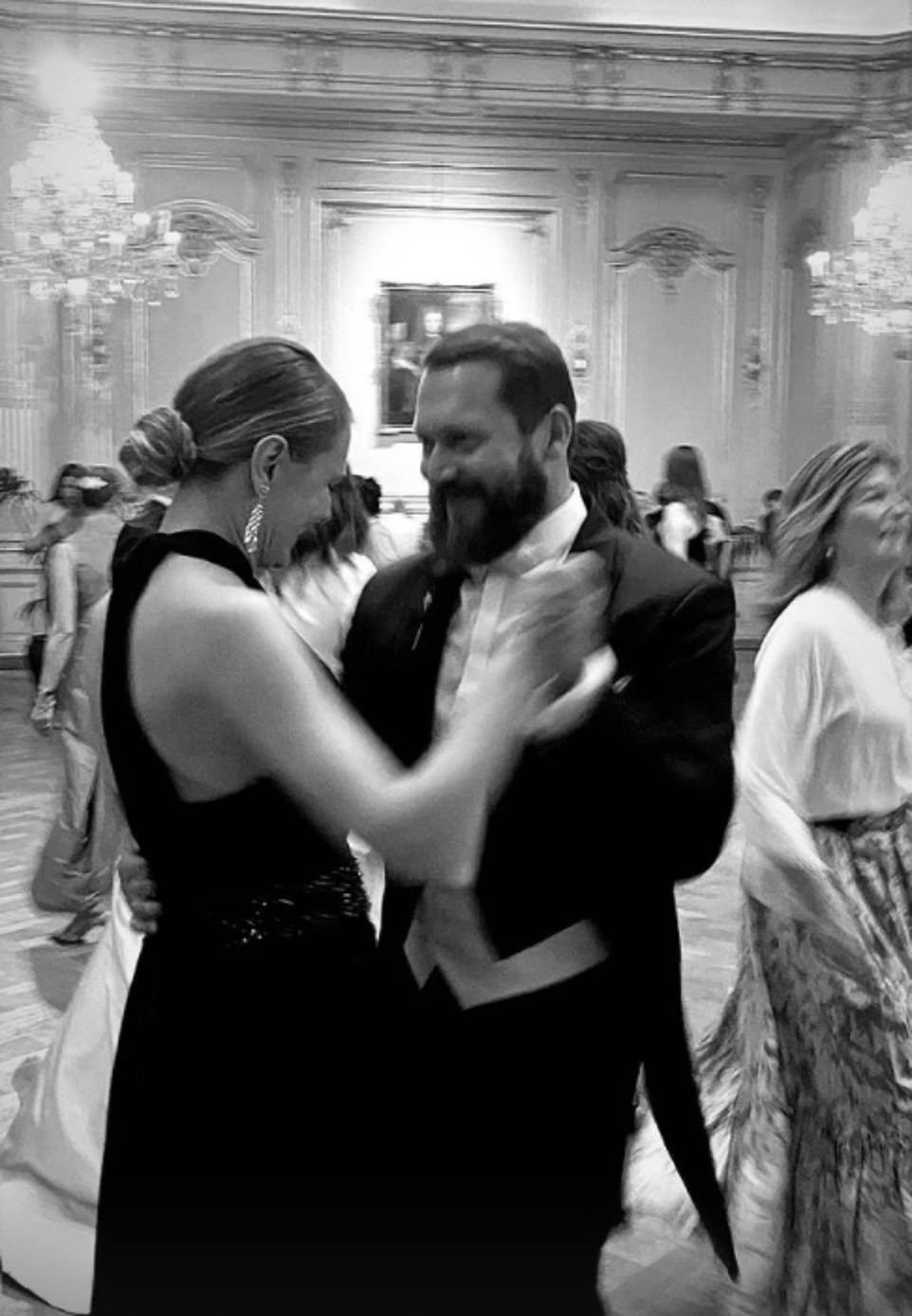 He remains in contact with the Romanovs as vice-president of the Romanov Family Association. Pictured: Guests dance at the wedding. 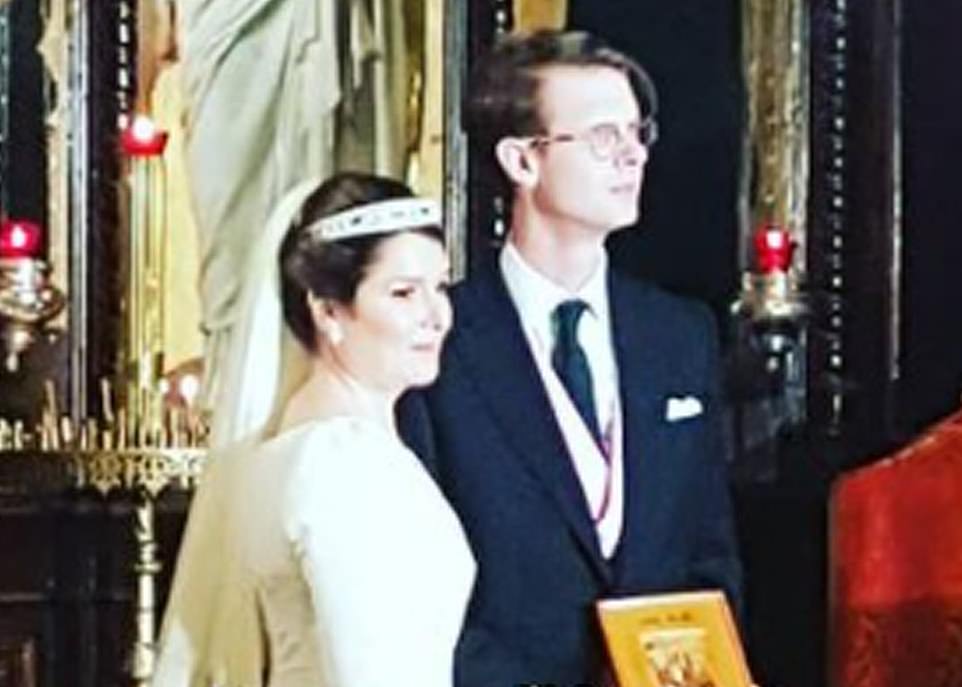 In September 2019, the artist announced his engagement to Foteini, with a friend telling the Daily Mail: ‘They have been together for a long time and they are delighted.’