Thousands of protesters rallied in the centre of Rome today to demand the resignation of its mayor over the Italian capital’s decrepit infrastructure.

The cry ‘Rome says enough!’ has spread in recent weeks on social media, with residents sick of buses that burst into flames, parks left to run wild and abandoned buildings taken over by drug peddlers.

The demonstration was arranged before a horrific accident this week in which more than 20 people, mainly Russian football fans, were injured when an escalator in one of the city’s main metro stations collapsed.

Raggi won the seat in 2016 for the anti-establishment Five Star Movement after both the traditional left and right-wing parties were seen to have failed to get to grips with a city drowning in debt.

She has struggled to build a team or take the initiative and her popularity has plummeted.

Raggi is also standing trial on charges she lied about a council appointment, with a verdict in the case expected in November.

Should Raggi be found guilty, she will be expected to stand down – potentially opening up the post of mayor to the far-right. 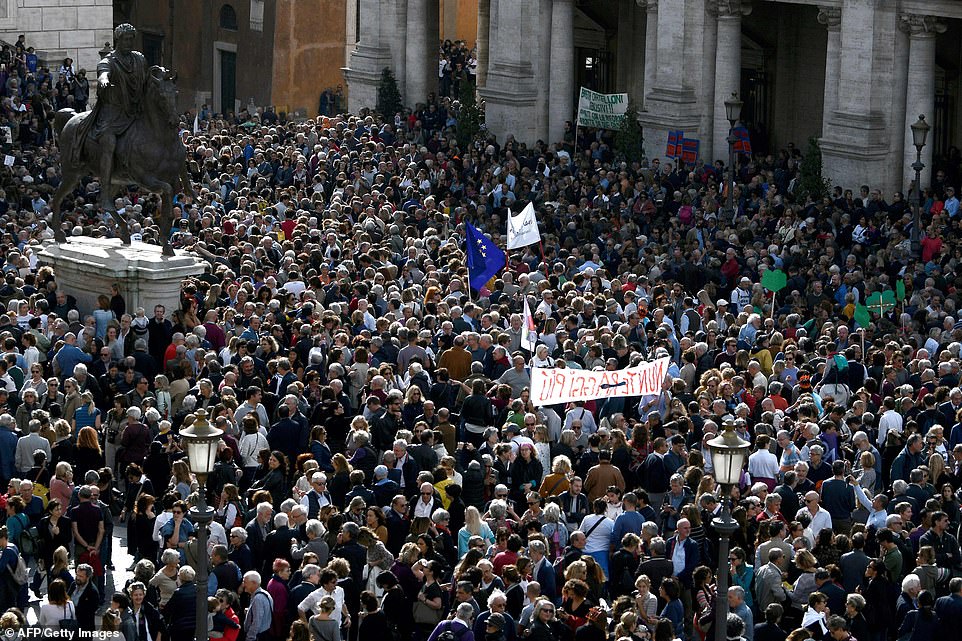 Demonstrators gather in Rome ‘s Piazza del Campidoglio, on October 27, 2018 during a protest against the current decay of the capital under the populist Movimento 5 Stelle administration 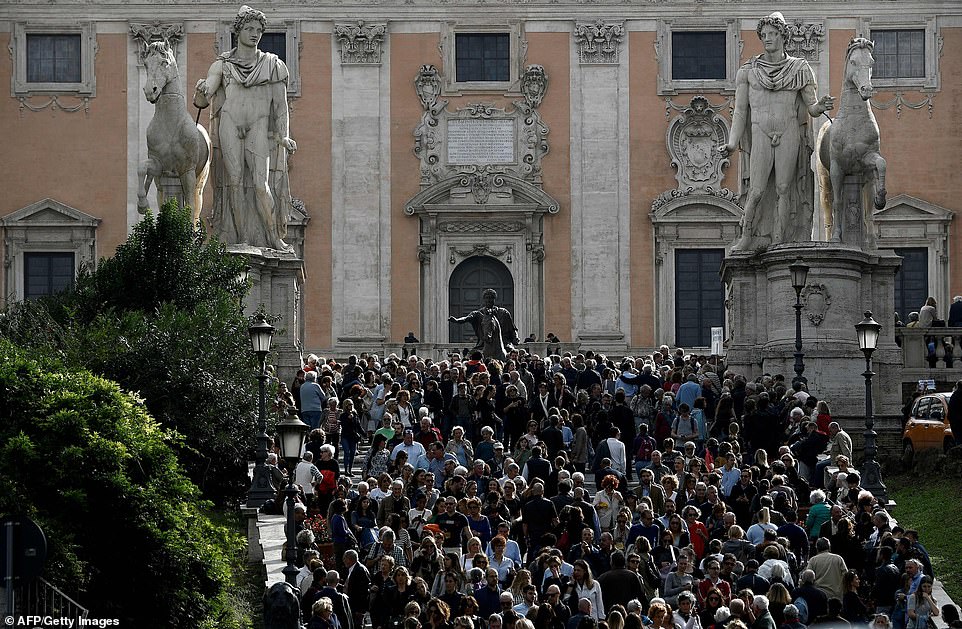 Demonstrators gather in Rome ‘s Piazza del Campidoglio, on October 27, 2018 during a protest against the current decay of the Italian capital

‘We have to send this woman home and find someone whose sole purpose is not to smile for photographers,’ said 75-year-old protester Cecilia Todeschini.

She was holding a sign saying: ‘Rats, mosquitoes and Rome’s boars thank her. The citizens don’t!’

Student Giancarlo, 23, said he was ‘glad so many people came’ to protest, adding: ‘We can’t stand this inertia any longer’.

‘We’re here because Rome deserves better, because Rome is in a state of neglect the like of which has never been seen before,’ said Marita Monaco, 57, who took part in the protest in a Renaissance square designed by Michelangelo. 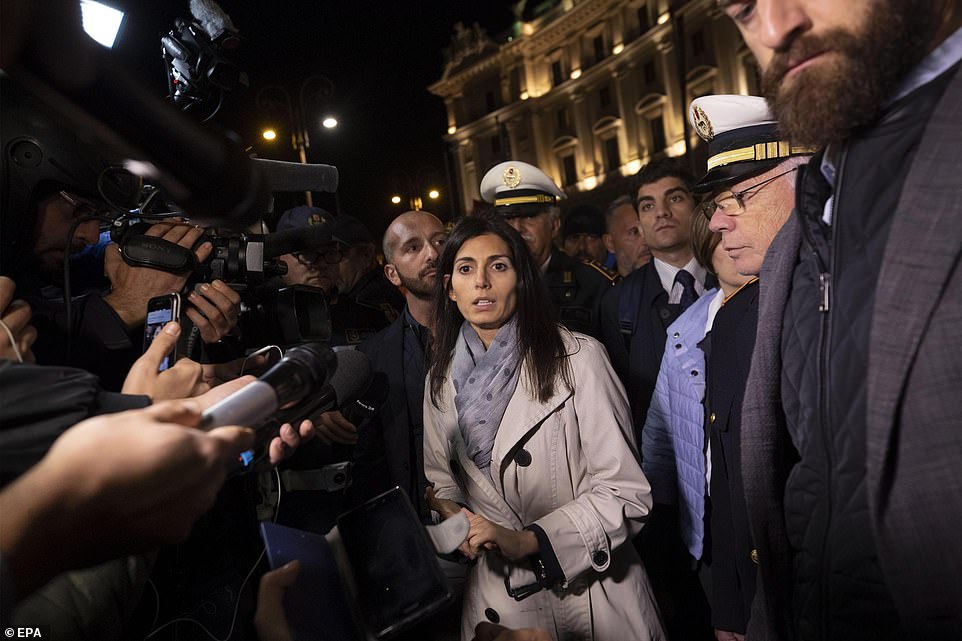 Mayor Virginia Raggi after her visit at the ‘Repubblica’ subway station where an escalator collapsed, in Rome this week 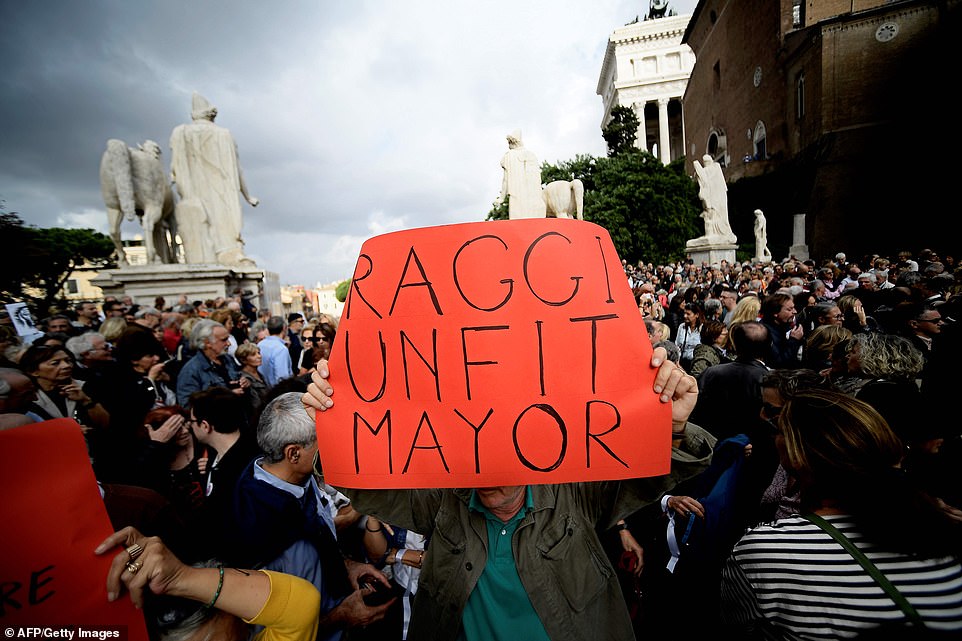 This demonstrator had a clear message, in English, for Rome’s mayor Virginia Raggi today in Piazza del Campidoglio 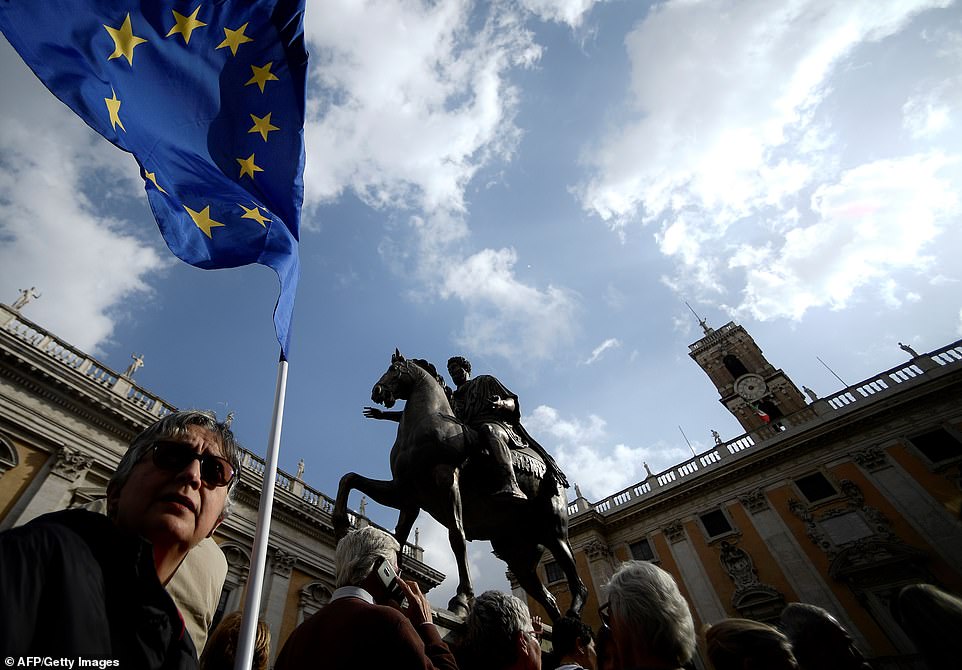 The non-political protest, open to ‘all citizens, associations, committees, districts and ages’, has been organised to highlight the current poor state of the city like uncollected rubbish, flooded streets caused by blocked drains, and city buses in flames under the banner Roma dice basta

‘It is a city in disarray, where there are no more rules or social cohesion,’ she added.

Raggi is a member of the anti-establishment 5-Star Movement and was swept to power following a wave of public disgust over corruption scandals that had battered previous administrations run by both traditional left- and right-wing parties.

The first female mayor in the history of the city, Raggi says she needs more time to overcome Rome’s myriad problems, but argues that she is already making good progress. 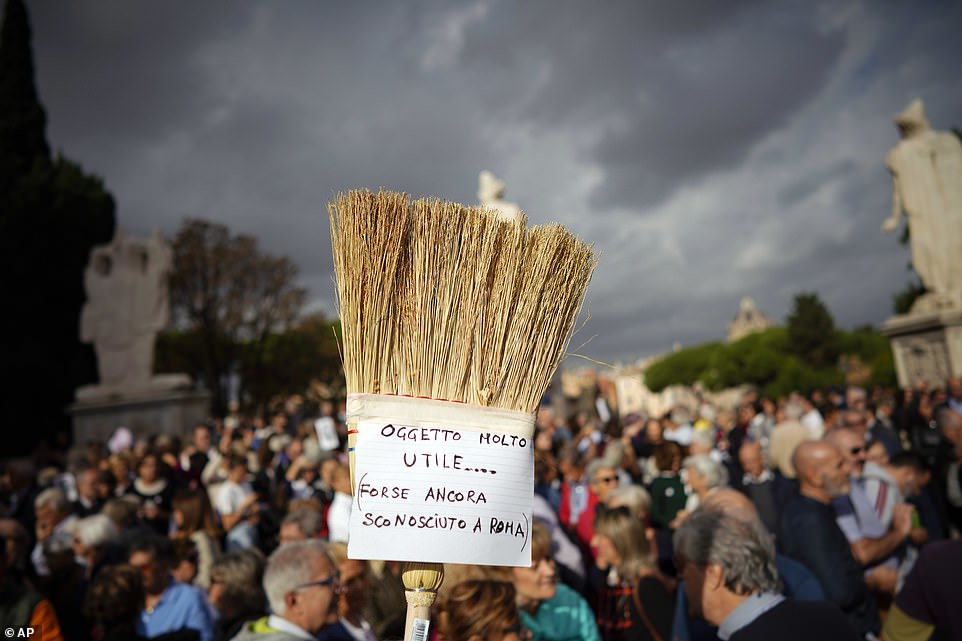 Rome’s citizens, fed up of the ongoing decay of the city, demonstrate in front of Rome’s Campidoglio Capitol Hill today. Writing on a broom, this demonstrator’s message reads ‘Very useful object…. (maybe still unknown in Rome)’ 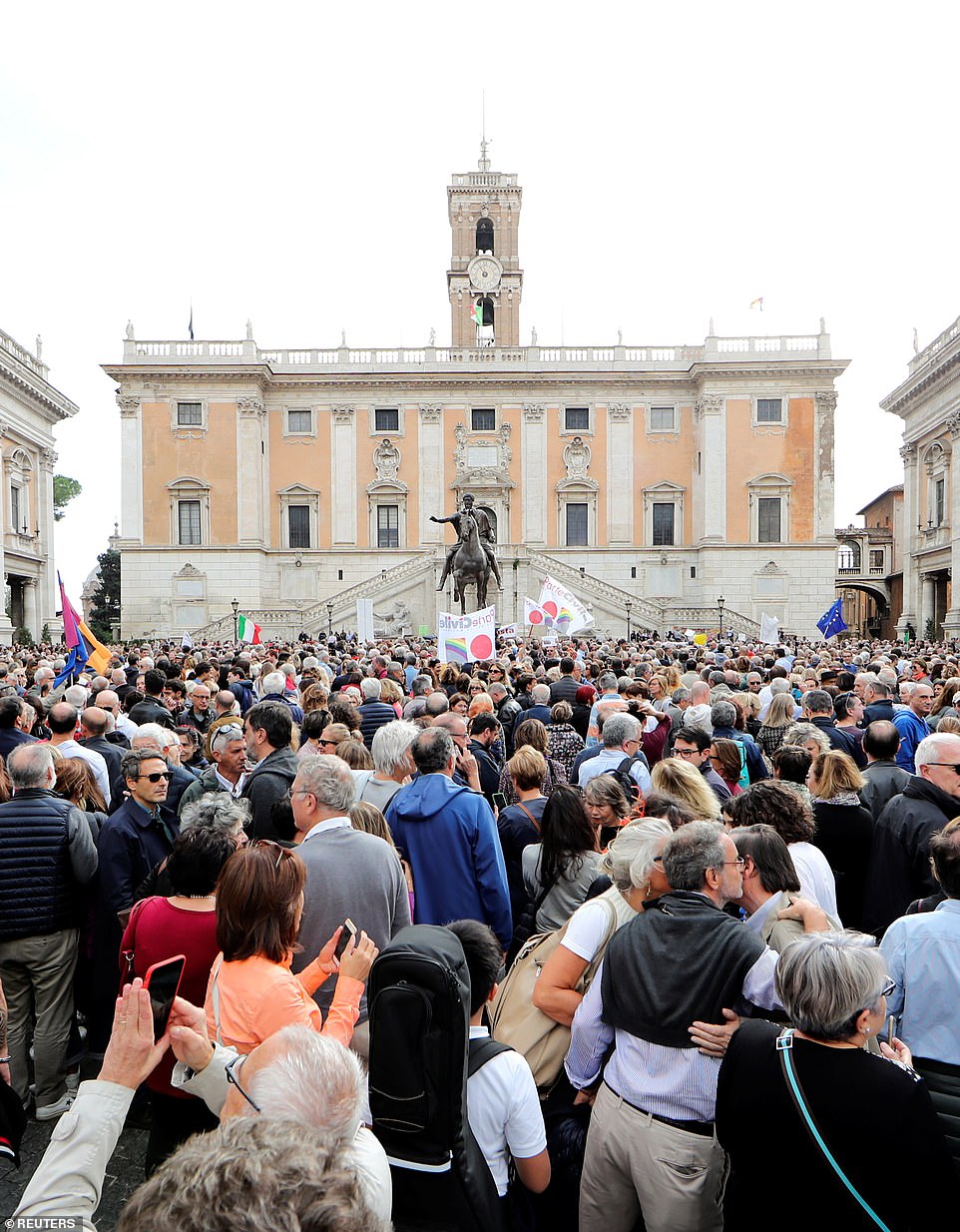 Her critics say things are getting worse, not better.

A strike by rubbish collectors has left many trash cans overflowing, potholes riddle the roads, while the local transport system is in permanent crisis.

More than 20 buses have caught fire on the streets of the city so far this year, largely the result of poor maintenance , while a broken escalator injured more than 20 Russian soccer fans at a city metro station last Tuesday. 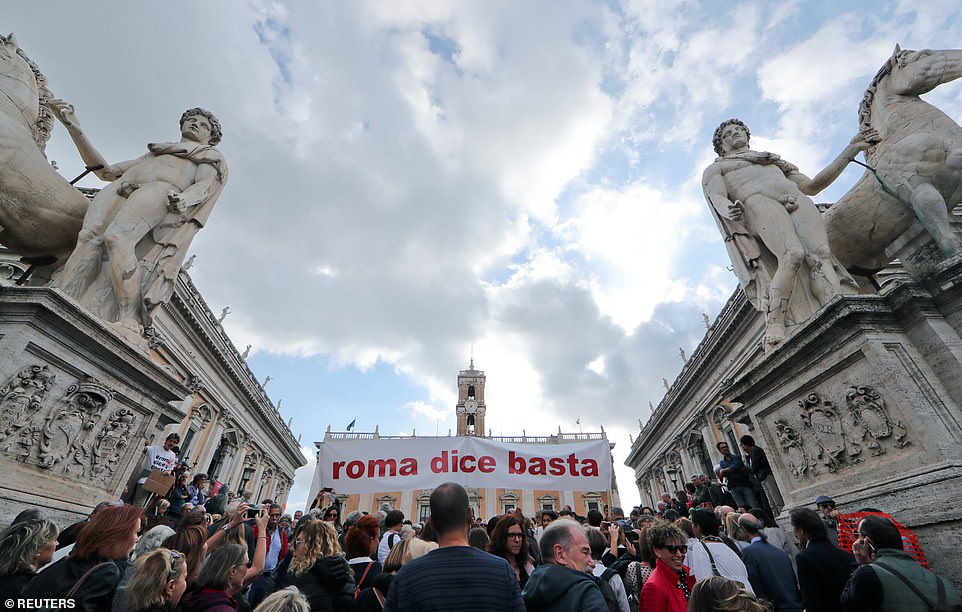 People hold a banner reading: “Rome says enough” as they gather outside Rome’s City Hall to protest against the decline of the Italian capital 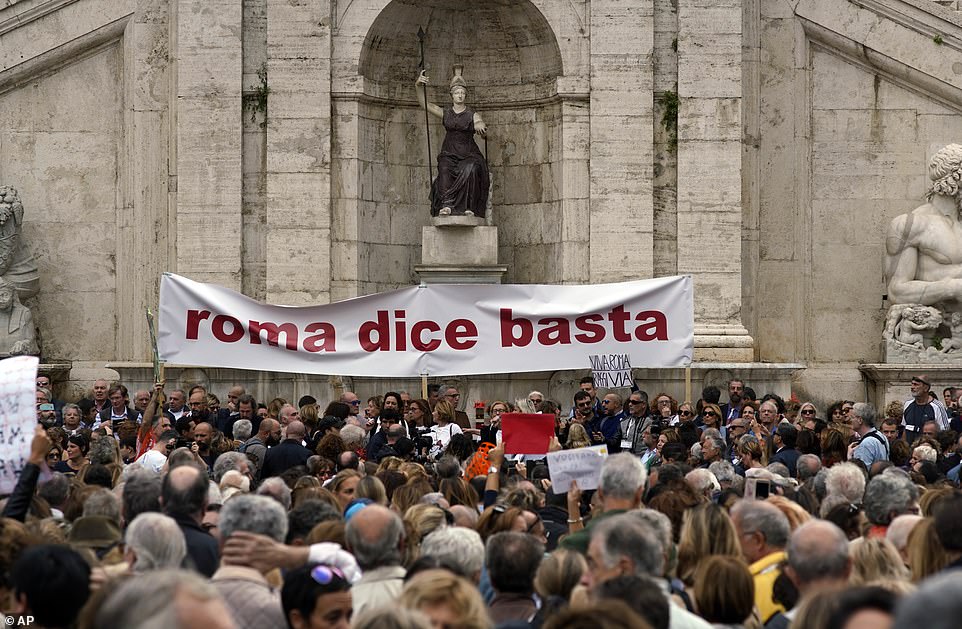 Rome’s citizens, fed up of the ongoing decay of the city, demonstrate in front of Rome’s Campidoglio Capitol Hill 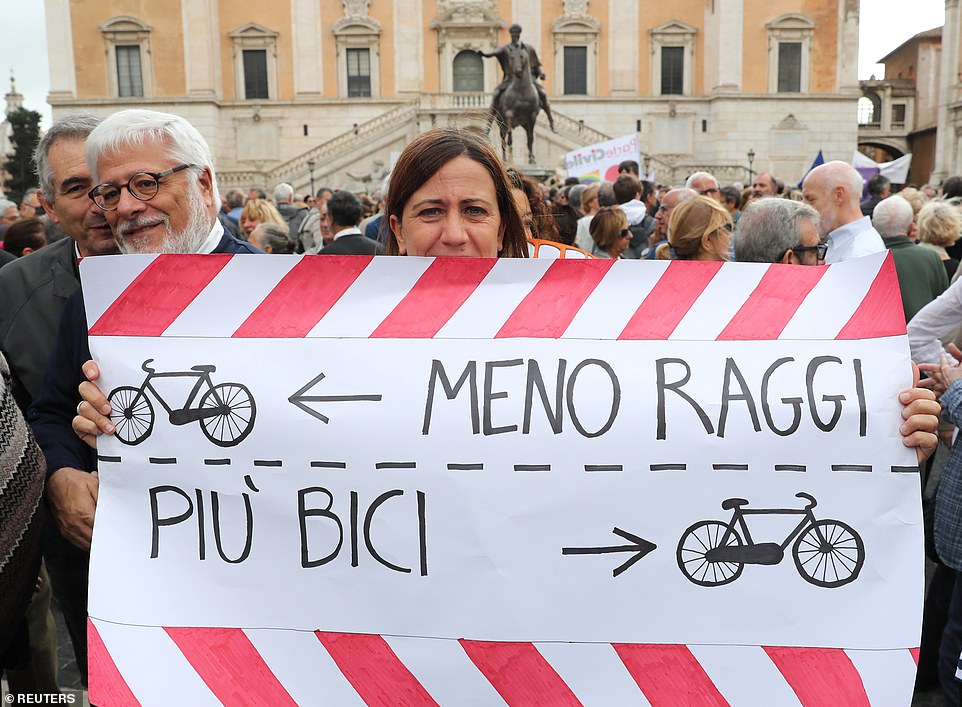 The death this week of a 16-year girl, whose body was found in an abandoned building used by drug dealers, underscored fears about law and order in the city. Police say they believe the girl was gang-raped and have arrested four migrants.

‘Rome has become an open sewer, a scandal, full of rats, foxes, wild boar and rubbish,’ said Rome resident Salvatore Golino. ‘We are drowning in trash and we can’t take it anymore.’ 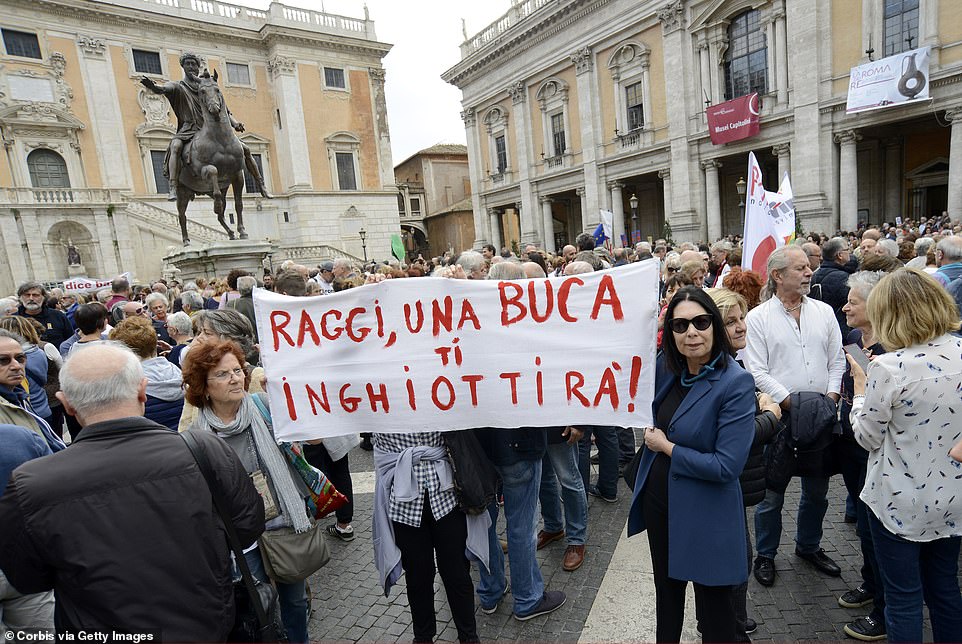 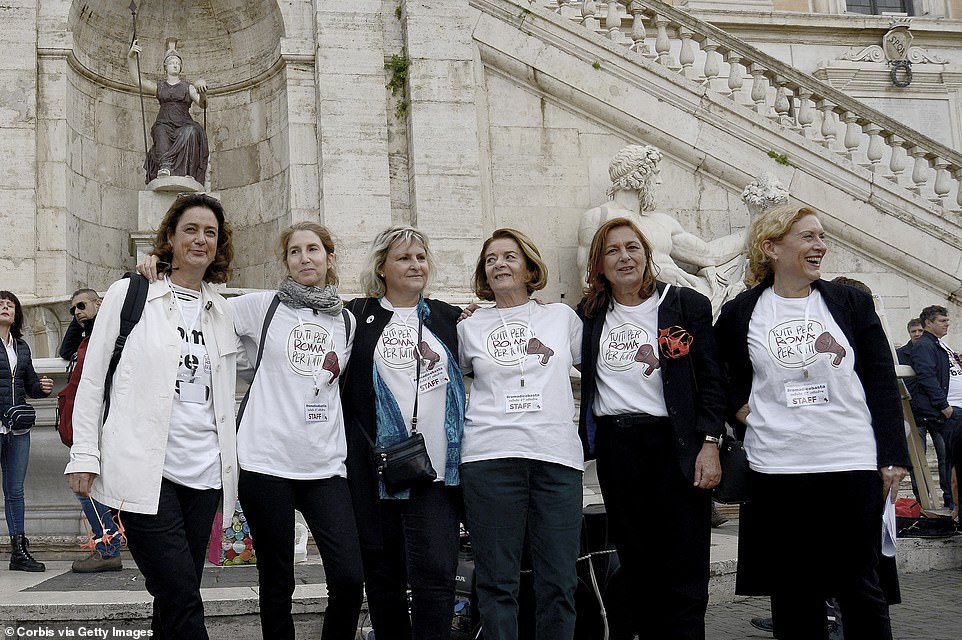 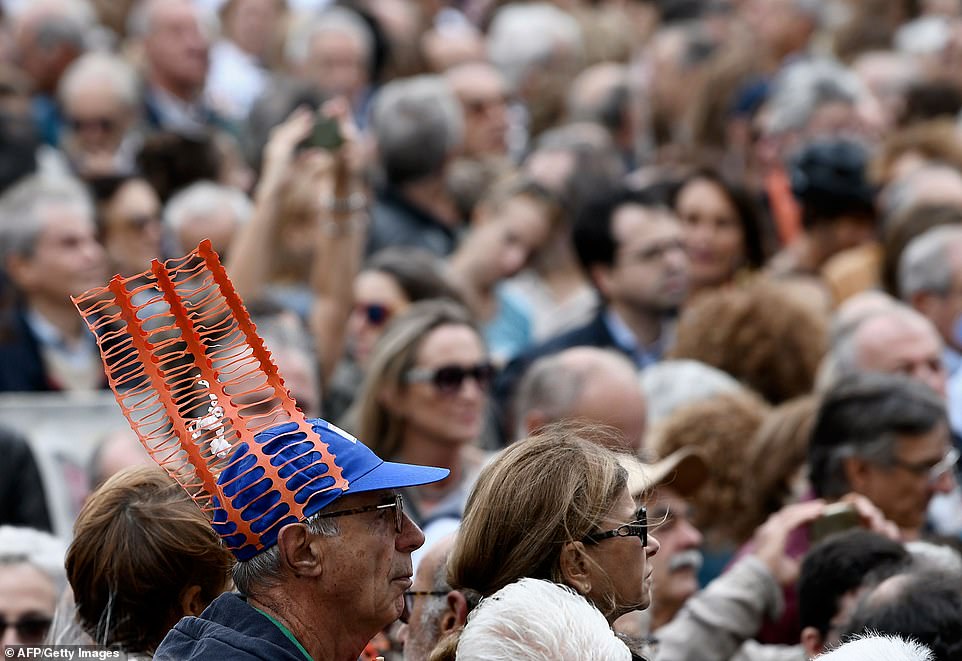 A demonstrator wears a roadwork net at Piazza del Campidoglio in Rome on October 27, 2018, during a protest against the current decay of the capital under the populist Movimento 5 Stelle administration of Mayor Virginia Raggi

A recent video that went viral online showed a family of boar foraging through sacks of rubbish on a city street. Another video earlier this year showed a large boar running up a major city road under the gaze of astonished drivers.

Raggi is standing trial for alleged abuse of office over a contested appointment within her administration. She has denied the accusation, but has said she will resign if found guilty.

A verdict is due on November 10 and Raggi’s administration would fall if she left office, potentially opening the way for fresh elections. 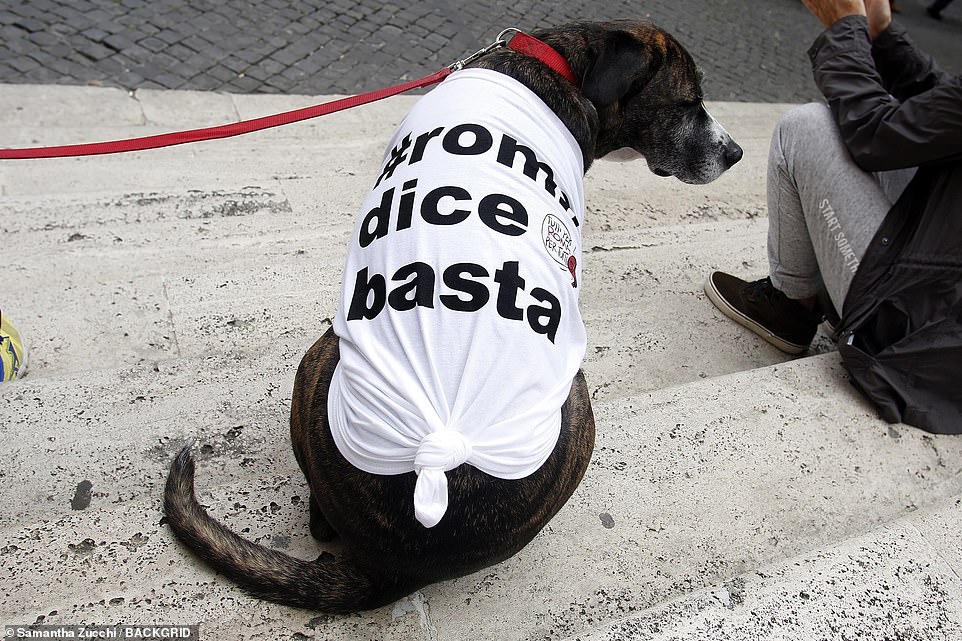 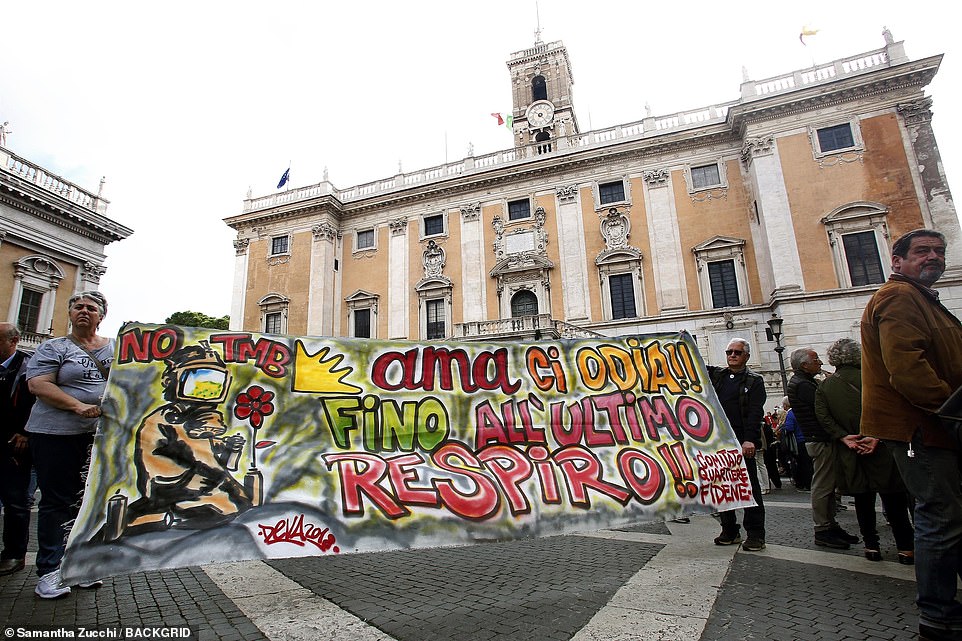 ‘love he hates us !!! Until the last breath!!’ – a sign with this message is held aloft by protesters in Rome earlier today 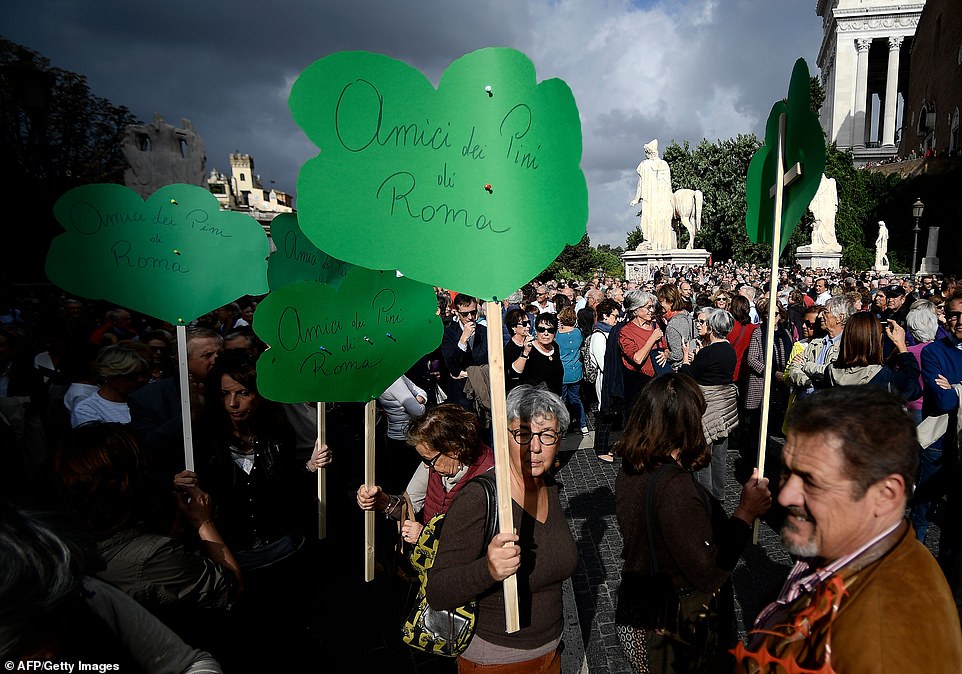 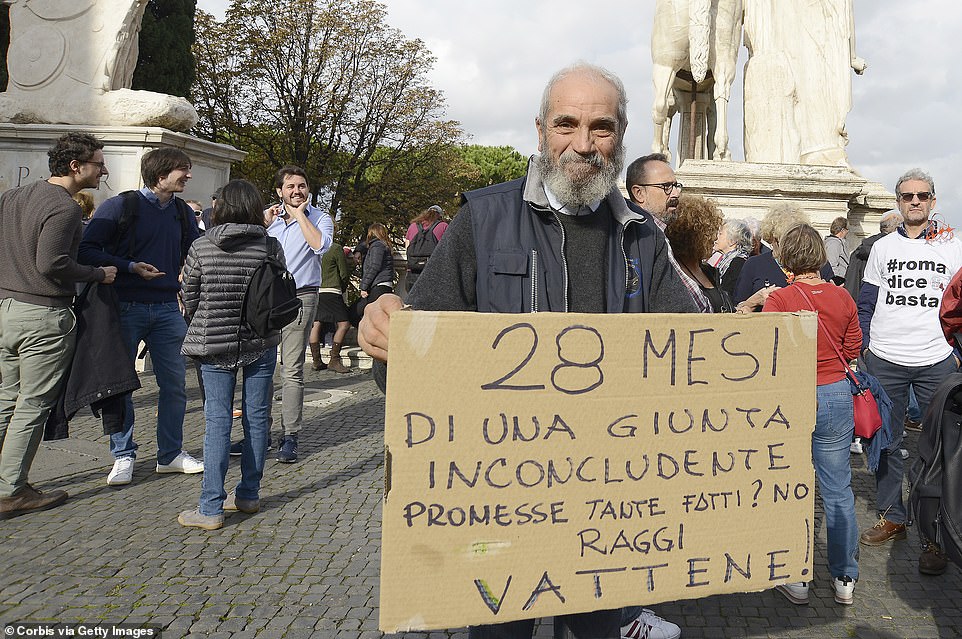 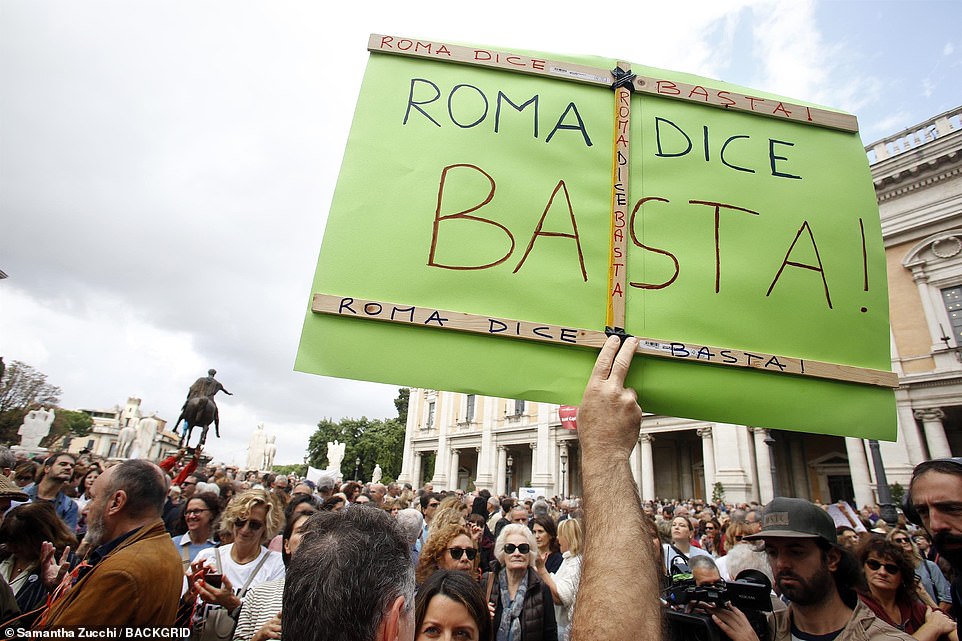 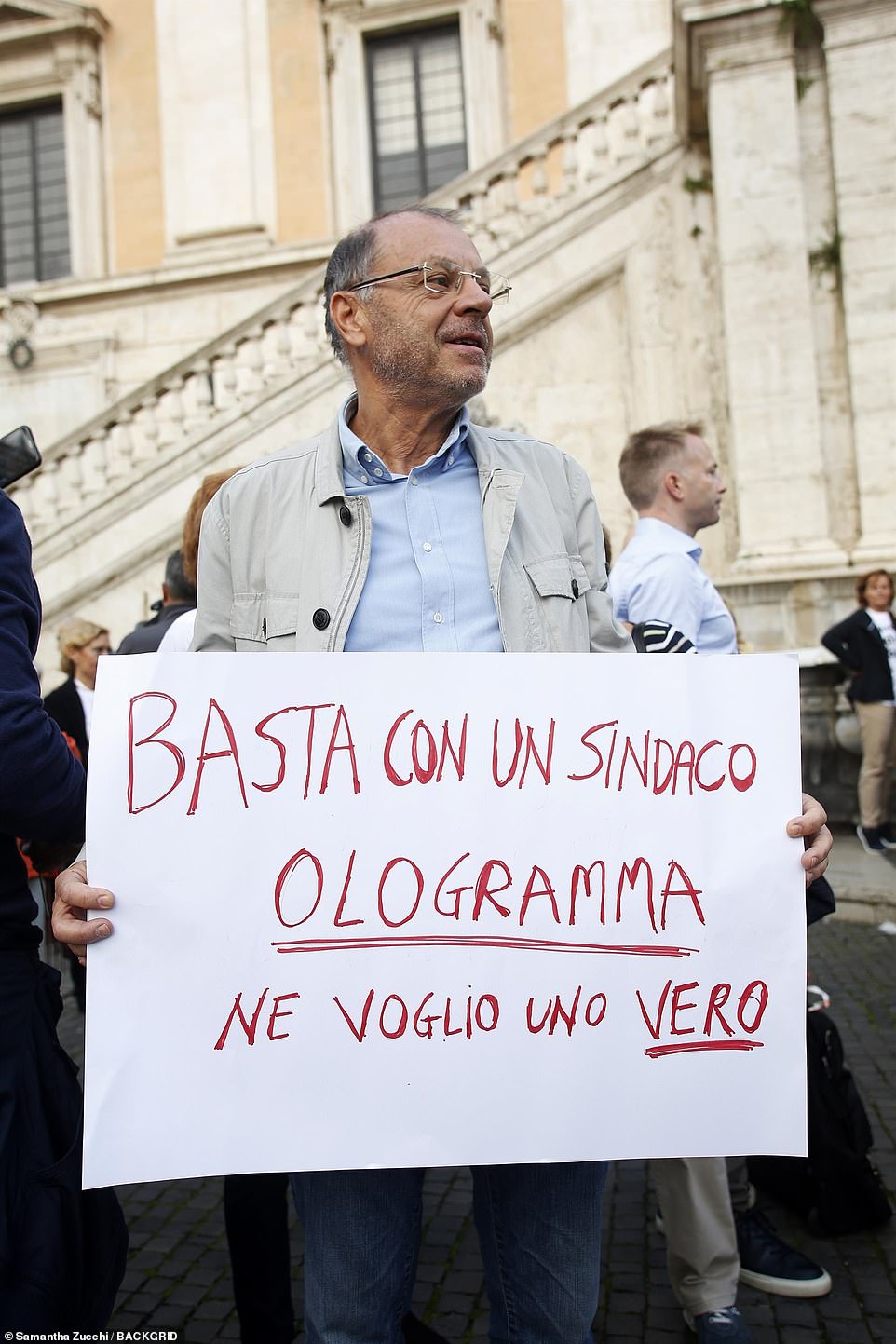 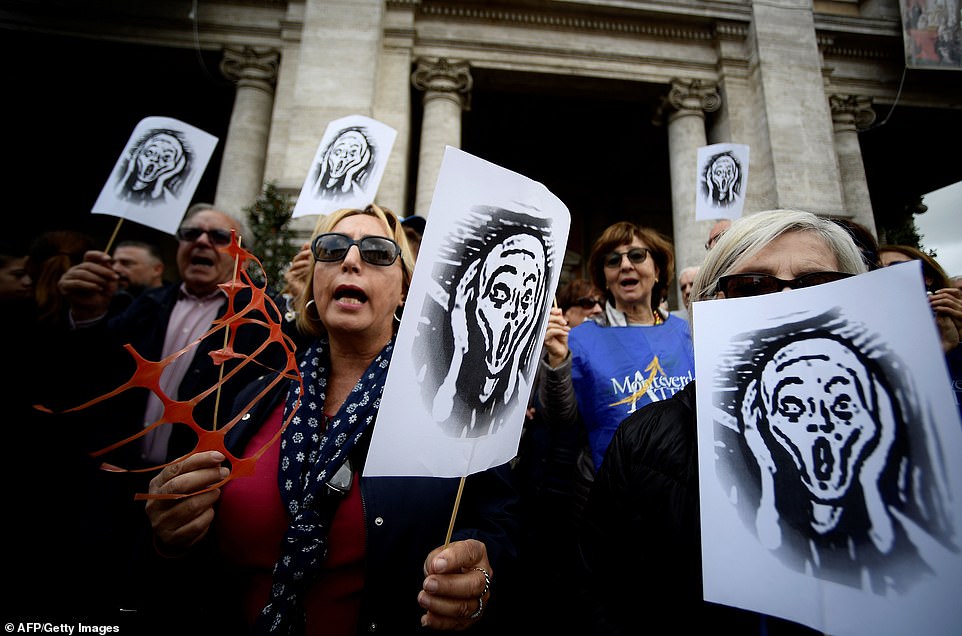 Demonstrators hold reproduction of Norwegian Expressionist artist Edvard Munch’s painting ‘the Shout’ in Rome ‘s Piazza del Campidoglio, on October 27, 2018 to protest against the current decay of the capital under the populist Movimento 5 Stelle administration of Mayor Virginia Raggi