Romeo and Cruz Beckham proved they are ever the close siblings on Wednesday as they posed for a playful snap during a trip to Paris.

The two youngest sons of Victoria and David, 17 and 20, were joined by close family pal Holly Ramsay for the city break, as he trio gave an insight into the trip to their respective social media profiles.

Holly, 22, who is Gordon Ramsay’s middle daughter, also got a new tattoo during the trip – sharing pictures of the new ink which graced her wrist.

Brothers: Romeo and Cruz Beckham amped up the brotherly love n Wednesday with a sweet snap as they enjoyed a trip to Paris

Smiling in front of the lit-up Eiffel Tower, Cruz donned a dark wash, double denim ensemble as he lept into his brother’s arms.

While Romeo sported a black, crew-neck sweatshirt and crossbody bag while letting out a laugh.

‘Wow how romantic,’ joked the budding footballer in the caption while posting the shot to his 3.6M followers. 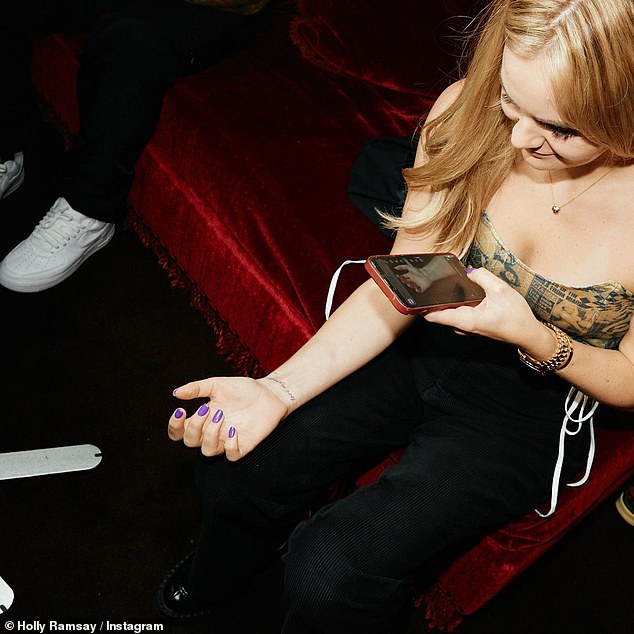 Inked: They were joined by pal Holly Ramsay, who got some new ink during the city break 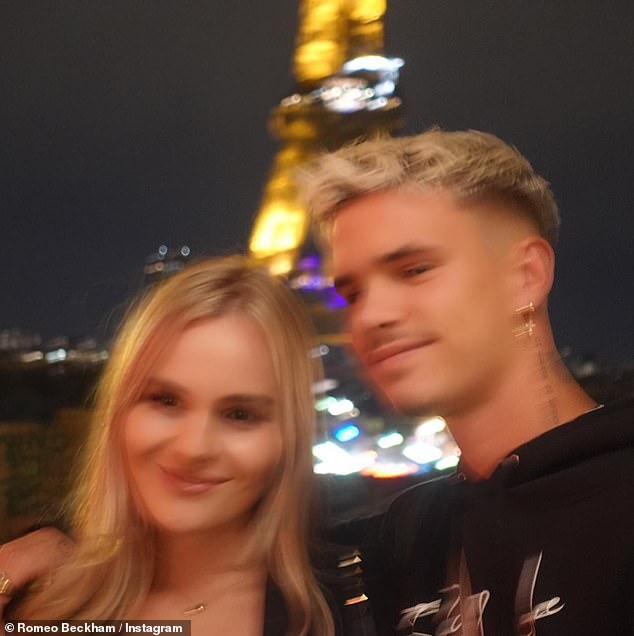 Friends: Gordon Ramsey’s middle daughter smiled with Romeo in another blurry snap, which showed the latter wrapping an arm around her

Holly also shared a collection of pictures from the trip, including some of her new tattoo – which read Love Myself in dainty lettering.

The podcast host also smiled with Romeo in another blurry snap, which showed the latter wrapping an arm around her.

Holly is one of famous chef Gordon’s five children, alongside her twin brother Jack, Megan, 23, Tilly, 20, and Oscar, three. 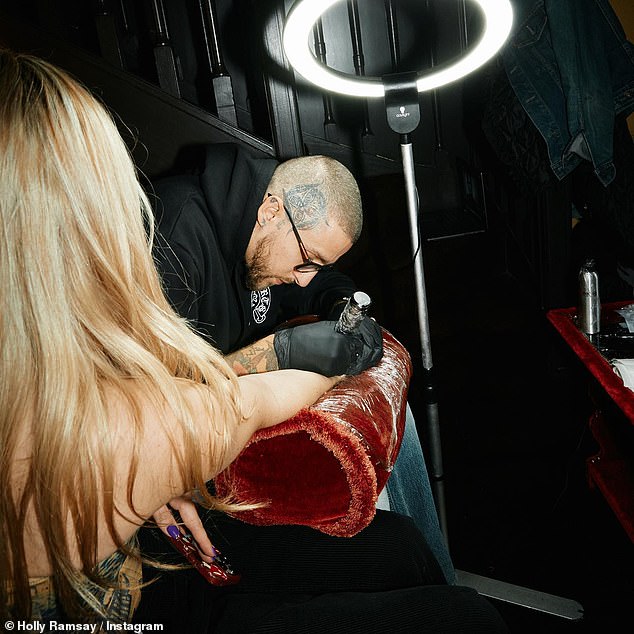 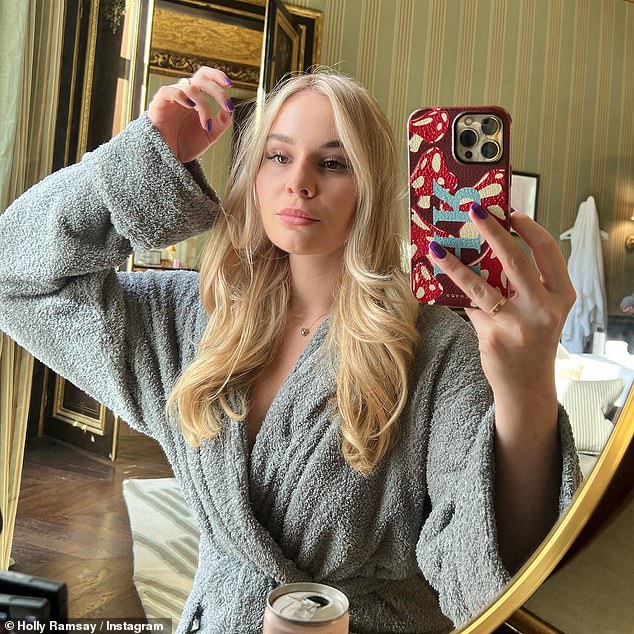 Beauty: Holly documented her time in the French capital with the collection of snaps, styling her blonde locks in a gorgeous wave for one

She and her siblings have been close pals with the Beckham brood for a number of years, often being spotted with Romeo, Cruz, their older brother Brooklyn and youngest Harper, 11.

And the trip comes just weeks after Romeo confirmed he was back together with former girlfriend Mia Regan.

The sportsman enjoyed a night out in London with his model girlfriend, showing the romance was back on after they were seperated for four months. 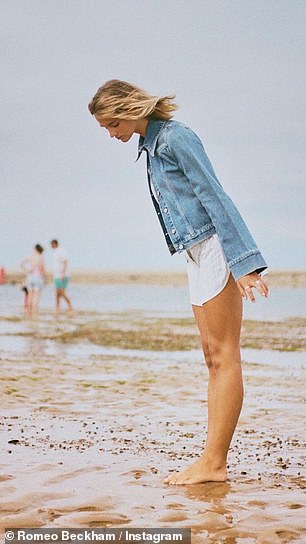 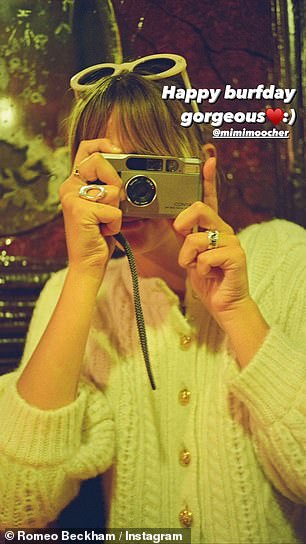 Cute: And the trip comes just weeks after Romeo confirmed he was back together with former girlfriend Mia Regan

It is believed that the toll of a long-distance relationship ultimately contributed to the break-up with Romeo pursuing a football career in Miami, Florida.

Mia and Romeo celebrated their three-year anniversary shortly before they announced that they had parted ways earlier this year.

She has stayed friendly with his family and even collaborated with his mother Victoria Beckham on her self-titled fashion brand.

And proving they’re once again strong, Romeo wished Mia a happy birthday by penning: ‘Happy Burfday gorgeous’ over a snap of her. 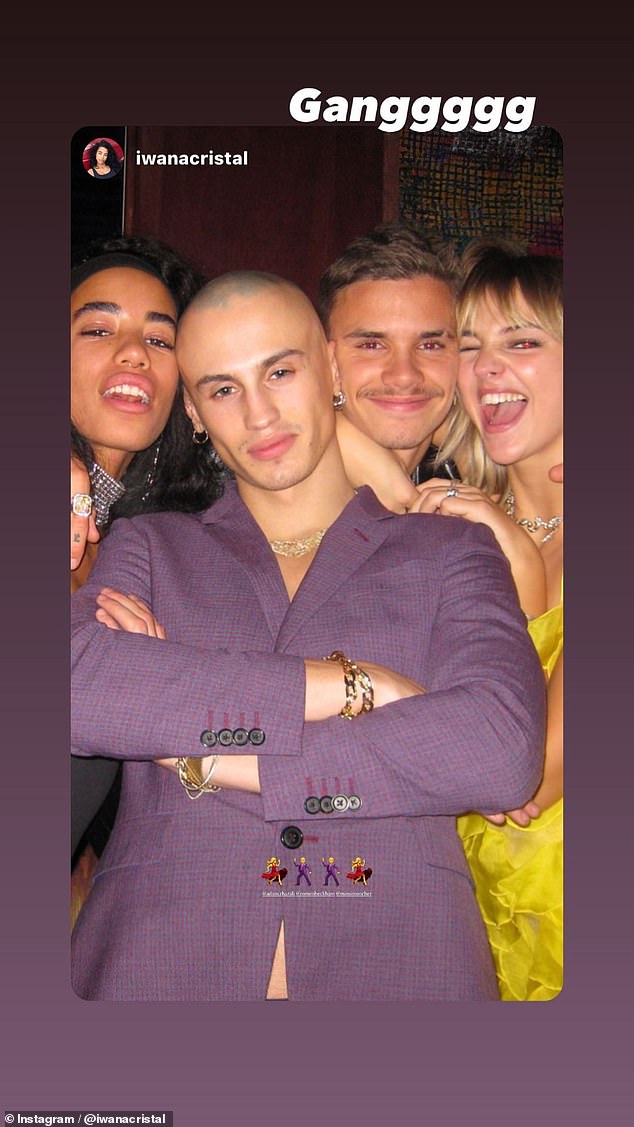 Loved-up: Romeo confirmed the romance was back on as the pair enjoyed a night out together to celebrate her 20th birthday