Rory Constantino stabbed plain clothes cop with a ‘spear’ in Sydney: Though officer was a ‘thug’

A Sydney man on trial for stabbing a plain clothes officer was terrified that ‘thugs’ had broken down his door and were out to hurt him and his family, his lawyer says.

Rory James Constantino on Wednesday pleaded not guilty to wounding Constable Jacob Vella with the intent of preventing the arrest of his father Ricky Constantino at their Sadleir home on June 11, 2019.

A Downing Centre District Court jury was told Constable Vella and a colleague arrived early in the morning with a warrant for the arrest of Constantino Sr, spoke to the younger Constantino through a partially opened door and then broke down the door.

Const Vella chased Constantino down a hall into the accused man’s bedroom, where he grabbed a makeshift spear and stabbed the police officer.

The police then retreated out of the home.

A medical expert is expected to tell the jury the one-to-two-centimetre cut to the officer’s neck and a deeper wound to his right wrist were ‘potentially life threatening’, prosecutor Leon Apostle said in his opening.

Paramedics and other police arrived on the scene later, with the injured officer taken to hospital and Constantino taken to a police station.

While Constantino admits stabbing and wounding Const Vella, the trial would turn on whether Constantino intended to prevent his father’s lawful apprehension and whether police were acting in execution of their duty, the accused’s man’s lawyer said. 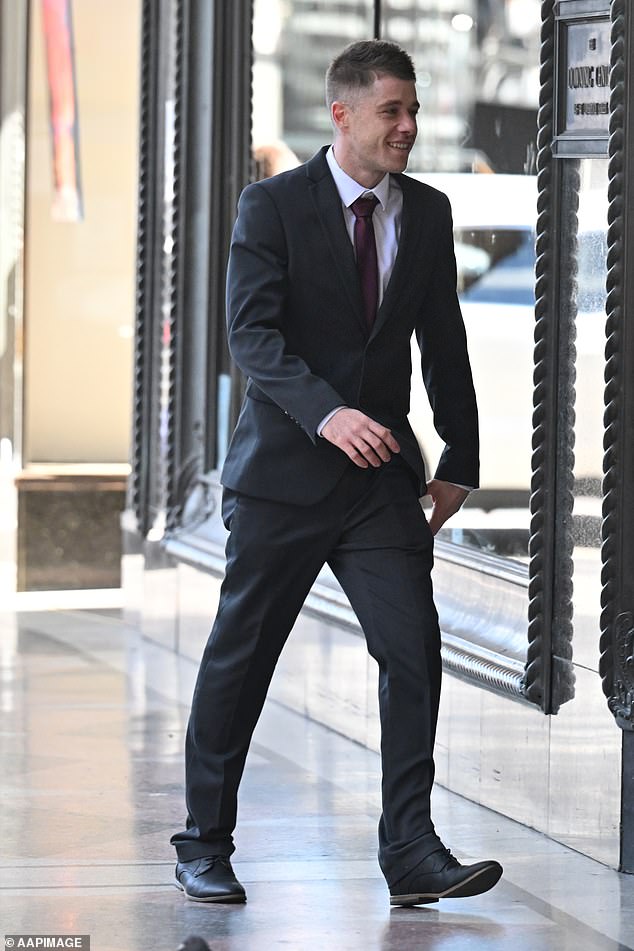 The officers weren’t in uniform, hadn’t arrived in a police car and were wearing dark black hooded jumpers when they banged on the front door before sunrise on June 11, defence barrister Brett Eurell said.

‘He thought they were thugs. He thought his house was being invaded,’ Mr Eurell said.

‘(He) was terrified these people dressed in black who have forced their way into his house, are there to hurt him and his family.’

The Crown expects Const Vella and his partner to testify they identified themselves to Constantino through the front door, both verbally and by the partner showing his NSW Police-issued badge. 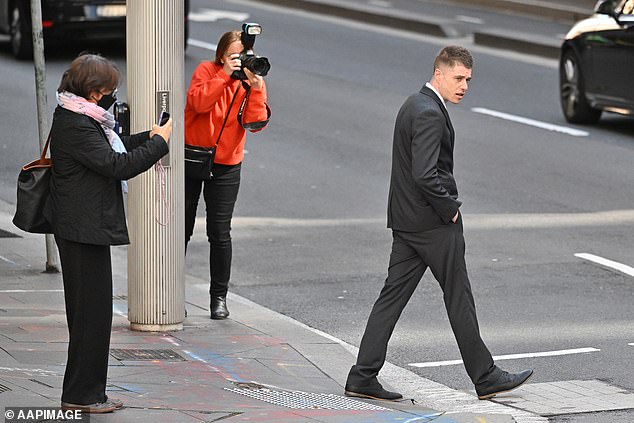 A recorded interview between Constantino and police is expected to be played to the jury, in which the accused man said he’d never seen a proper police badge and ‘paranoia had got the better’ of him.

Mr Apostle said his closing address would make ‘a great deal’ of Constantino’s record of what he told his father after the wounded Const Vella and his partner retreated from the home.

‘The officer said he’s been stabbed in the neck,’ Constantino said, according to the police interview.

The District Court trial is expected to run about seven days.