It’s been quite a while since we’ve seen Rory McIlroy with a look of such intent and focus that he showed at the start of his third round at the 121st US Open on Saturday. A long time, too, since we’ve seen him just where he wants to be heading into the final round of a major.

Head down at the beginning, ignoring the pleas of many to engage him in conversation, McIlroy was all business on the first tee. He’d seen the scores from the early starters. He know a round in the mid-sixties was on.

On the 10th anniversary of the day he won this title at Congressional, he put together a wonderful round of 67 to justify the bullish pre-tournament comments from coach Peter Cowen that the swing changes are bedded in and Rory is now on the way back.

‘I think we know at this event you have to show plenty of mental fortitude, and I’m delighted with the way I played and battled today,’ said McIlroy. ‘I was a bit wild in the second round but this was more like it.’

Some of McIlroy’s shots were pure in the manner of old. At the 600 yard par five 13th he hit a three wood so laser straight it hit the flag.

Two more such blows at the long 18th, and it was like watching him in his pomp, as he demolished the par fives.

After beginning the day in 21st place he will go into the last round on Sunday looking up at just a trio of players, with former Open Champion Louis Oosthuizen – so close to adding a second major at the USPGA Championship last month – American Russell Henley and Canadian Mackenzie Hughes all tied for the lead, two shots ahead of the Northern Irishman on five under. 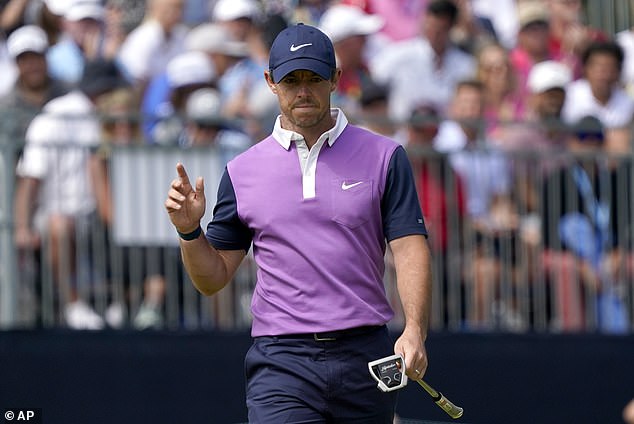 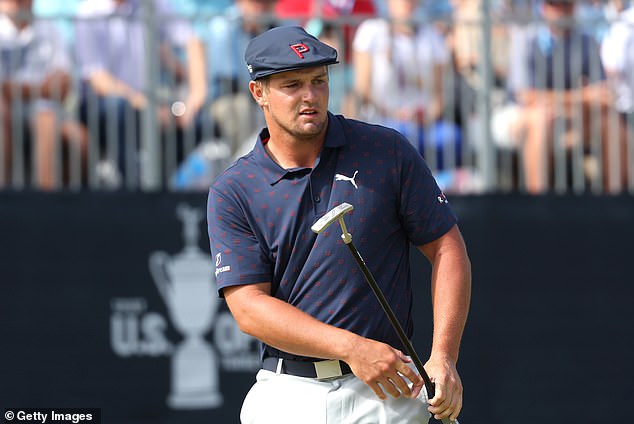 The one he might fear most is defending champion Bryson DeChambeau, who looked out of contention at four over during his second round. He’s played so well thereafter that he’s now on three under alongside Rory, after a 68 and the first bogey-free round he’s played in a US Open.

As for Englishman Richard Bland, the oldest halfway leader in US Open history, he was part of the most unlikely pair of front runners after 36 holes in recent major memory.

The grandstands here at the first hole are only small but neither was more than half full as the pair stepped on to the first tee.

Credit Henley, he immediately started talking to Bland to help him feel at ease in his first tournament in America for 12 years. The pair chatted happily away like two players used to each other’s company, rather than playing in the same event for only the second time.

The 32 year old from Georgia, who’s never finished in the top ten in a major in 19 appearances, was first to tee off with the tranquil waters of the Pacific Ocean in the distance. With the ubiquitous hang gliders plentiful on the horizon, it was tempting to wonder whether there more dare-devils visible than members of the last group’s gallery.

Given the alien nature of their experience, both players started well. They were certainly a lot more comfortable than myself and a couple of other golf correspondents standing behind the first green, as a rattlesnake made itself visible from underneath the television gantry. Imagine trying to remain still while the pair putted out, with that creature in the vicinity? 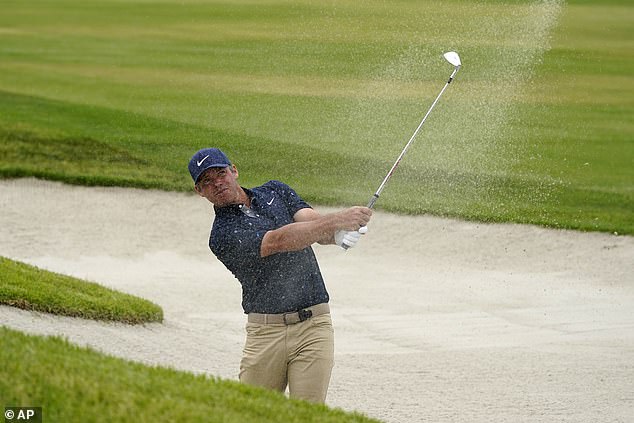 As for Henley, he began birdie-bogey before hitting the flagstick with his tee shot to the spectacular third, and was perhaps a shade unlucky it didn’t fall below ground.

So it continued over the front nine, with both players hitting fairways and greens for the most part in classic US Open-style.

Bland, sadly, then ran out of gas over the back nine. The man from Southampton didn’t manage a birdie all day, while five bogeys coming home and a fall from grace to a 77. From tied first, he will begin on Sunday alongside fellow 48 year old countryman Lee Westwood in tied 21st place.

After the miracle in May at the USPGA Championship, this has been a more sobering experience for Phil Mickelson, as his chance to finally win the major he needs to complete the career Grand Slam slipped away once more.

Now 51, he was not about to lose perspective in this special year when he became the oldest major winner of all time. 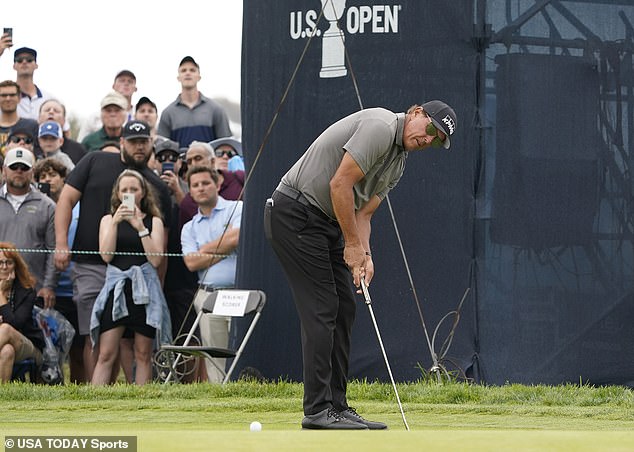 ‘I thought I had it after playing so well in the second round but I lost it completely today,’ he conceded, following a back nine featuring three bogeys and a double for a 75. ‘Having said that, I can’t tell you how much I appreciate playing our national championship in my home town.’

Paul Casey and Ian Poulter took advantage of the more favourable conditions to make rapid progress to the fringes of the top ten following rounds of 67 and 68 respectively.

For Poulter, this is proving a nicer experience than the last time the US Open was staged here in 2008. ‘I just hated it,’ he said. ‘I had a wrist injury caused by the thick rough and had to pull out halfway through my second round. This is a much more enjoyable set-up.’

Rory would certainly agree. Now, in his 50th major and seven years after the last of his four victories to date, can he finish the job off today?