Tearful Rory McIlroy apologises for ‘not doing more’ for his European team-mates during the ‘best experience in golf’, after winning his first point at Whistling Straits in vain as USA regain the Ryder Cup

A tearful Rory McIlroy apologised to his team-mates with Europe on the verge of a Ryder Cup humbling.

Despite the Northern Irishman taking the first point on the final day, a sea of red elsewhere on the scoreboard left the Americans – who took a huge 11-5 lead into the singles – looking at an almighty victory.

McIlroy endured a wretched tournament and his 3&2 victory over Xander Schauffele was far too little, too late with the hosts certain to wrench back the trophy. 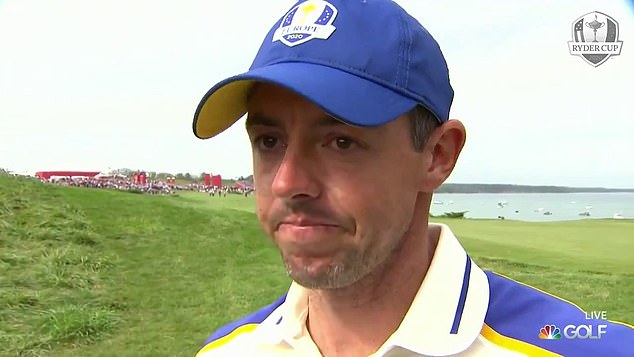 Initially unable to speak as he walked off the 18th, an emotional McIlroy eventually managed to gather himself. ‘I just…I love being a part of this team,’ he said, voice trembling.

‘I love my team-mates so much and I should have done more for them this week. I’m glad I put a point on the board today but I just can’t wait to get another shot at this.’

Europe need a final-day turnaround even greater than the Miracle at Medinah, which saw them come back from 10-6 down in 2012.

But it was more like the walloping at Whistling, as moments after McIlroy’s success Patrick Cantlay, then Scottie Scheffler and Bryson DeChambeau put the US 14-6 up, needing just a further half point from the remaining eight matches.

Pausing again to choke back tears, a clearly devastated McIlroy added: ‘It is…by far the best experience in golf and I hope little boys and girls watching this today aspire to play in this or the Solheim Cup because there’s nothing better than being part of a team – especially with the bond we have in Europe.

‘No matter what happens after this I am proud of every single one of the players that played this week, I am proud of our captain and vice-captains. I just wish I could have done a little more for the team. It has been a tough week.’ 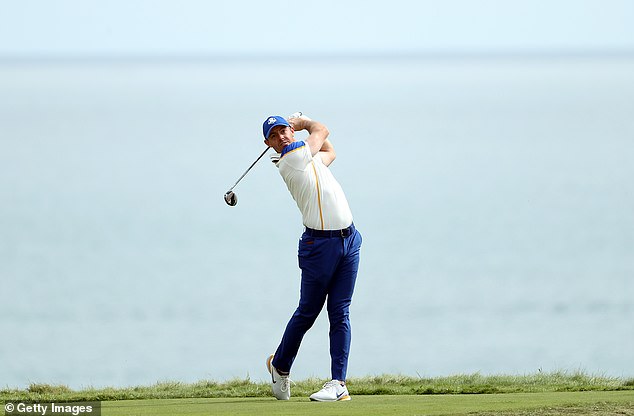 McIlroy further underlined his love for the Ryder Cup in another interview with American broadcaster NBC and said he was not ashamed to cry about the matter. ‘I’ve never cried about what I’ve done as an individual,’ he said. “I don’t give a ****.’

The relentless Americans raced into a 3-1 lead on Friday at the side of Lake Michigan and never lost control of a one-sided contest.

Over a miserable three days, Spanish pairing Jon Rahm and Sergio Garcia were one of few bright spots for Padraig Harrington’s outclassed Europeans.

The Irish captain may face questions over his team selection but the reality was that the gulf between the two sides was far too great. 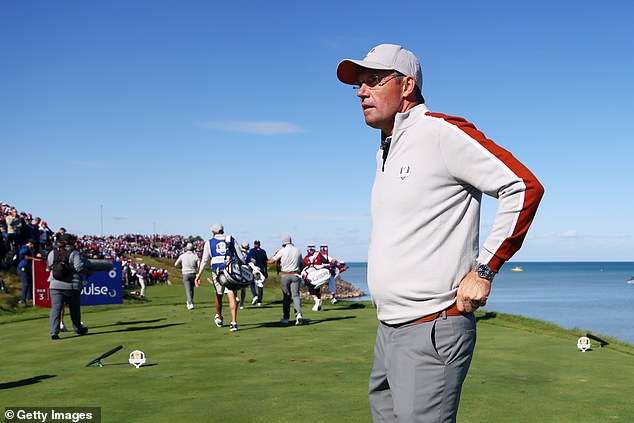 The youthful, ruthless Americans, with eight players in their 20s, will now want to dominate for years to come, with Rome hosting the next clash in 2023.

And the brilliant Cantlay sounded an ominous note. ‘It’s great,’ he said. ‘All the guys get along and we’ve played together since we were teenagers. We’re going to bring that killer instinct into future Ryder Cups.’