Roseanne Barr was back on Twitter Wednesday morning just five hours after signing off around 3am local time in Hawaii.

And the actress wasted no time addressing the controversy over her Valerie Jarrett tweet, writing: ‘I’m not a racist, I never was & I never will be. One stupid joke in a lifetime of fighting 4 civil rights 4 all minorities, against networks, studios, at the expense of my nervous system/family/wealth will NEVER b taken from me.’

That comment came hours after Barr retweeted a outlandish statement suggesting that Michelle Obama played a role in her firing.

‘According to sources ABC President Channing Dungey had a long conversation via phone with former First Lady Michelle Obama before deciding to cancel the Roseanne show,’ read the tweet.

‘Michelle Obama was reportedly enraged and insisted an apology was inadequate.’

Barr also retweeted a post that further suggested this was an attempt by the Obamas to get revenge after she mocked the couple’s Netflix deal with a hashtag last week that became a trending topic.

‘Interesting. A few days after the popular #ObmasNetflixShows was all over the place making people giggle. Not surprised and I would not doubt it being very true,’ read the post that Barr shared with her followers.

These were just two of the conspiracy theories that have been making the rounds since news of the show’s cancellation.

New remarks: Roseanne Barr returned to twitter Wednesday after a five-hour hiatus and wrote: ‘I am not a racist and never was. One stupid joke in a lifetime of fighting 4 civil rights 4 all minorities, against networks, studios’ (above)

Older remarks: That came hours after she suggested Michelle Obama was behind her firing by retweeting two unsourced claims alleging that the former first lady conspired with Channing Dungey ahead of ABC’s decision 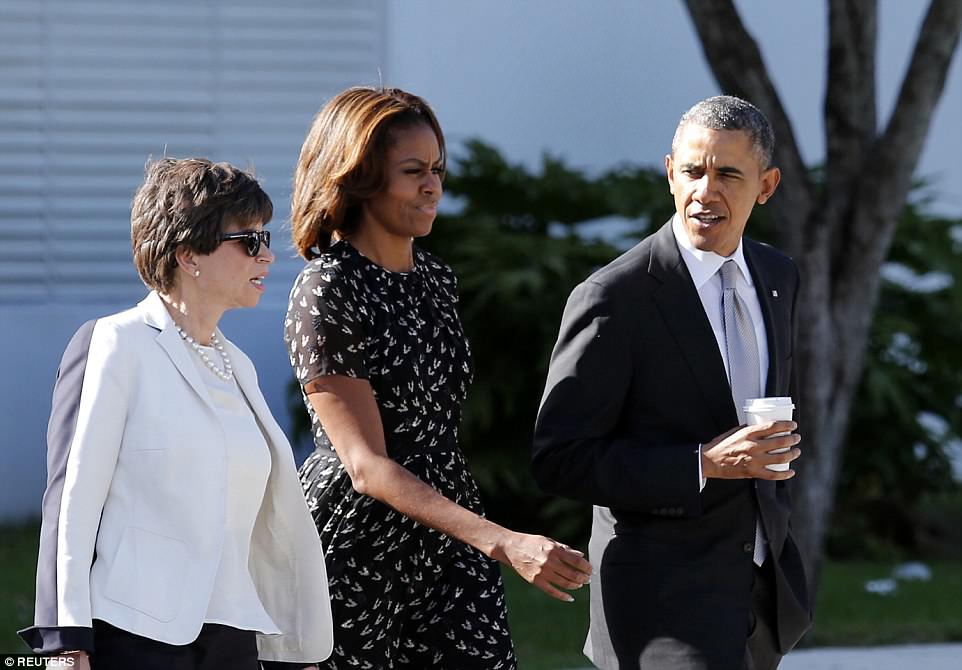 Keeping above the fray: Barr also retweeted an individual who suggested the Obamas, who employed and are close friends with Valerie Jarrett, did this as revenge because Barr mocked their $50 million Netflix deal (l to r: Jarrett, Michelle and Barack in 2014) 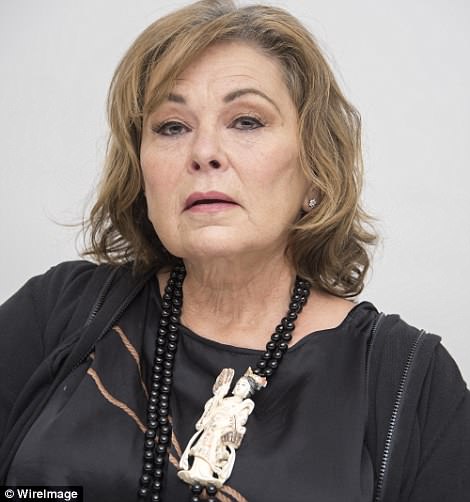 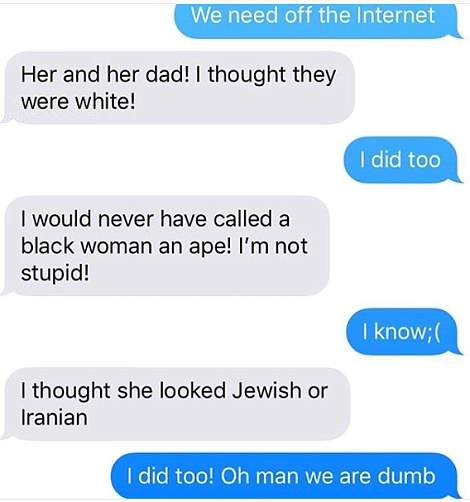 Contextual: Her son also shared text messages that he and his mother purportedly exchanged in which Barr writes that she thought Jarrett was ‘white’ and ‘Iranian,’ posted eight hours after the show was cancelled

At the same time, Barr’s son Jake shared text exchanges with his mother to prove she was not racist.

‘Her and her dad, I thought they were white,’ writes Barr in a text message she purportedly sent her son.

She followed that up by saying: ‘I would never have called a black woman an ape I’m not stupid!’

The third text stated: ‘I thought she was Jewish of Iranian.’

Her son captioned the image by writing: ‘Mom and I are too dumb for the internet lol.’

That was posted eight hours after ABC announced the show had been cancelled.

He then lashed out at those attacking his mother, writing: ‘Let’s not bash the actors for not defending Mom. All she did was get them careers and was never racist for a second ever in her life so you can’t expect them to say that when they are trying to spin this for publicity to get another job.’

He also commented on a post by stating: ‘It’s Hollywood. Only rapists get defended.’

Barr had previously blasted two of her co-stars for speaking out against her in tweets posted around midnight.

Hours after claiming she was quitting Twitter, Barr began to rail against her critics while also posting an occasional apology.

Michael Fishman, who played D.J. Conner on the show and started working with Barr when he was just six, was the first to feel the wrath of the show’s creator after he released a statement criticizing her racist tweet saying Jarrett looks like the lovechild of the ‘Muslim Brotherhood and Planet of the Apes’.

Fishman responded, stating: ‘You fought, built, and designed Roseanne for inclusiveness. That is why yesterday was so out of character with the last 30 years. It was in your hands from the beginning to the end. No one can deny that.’ 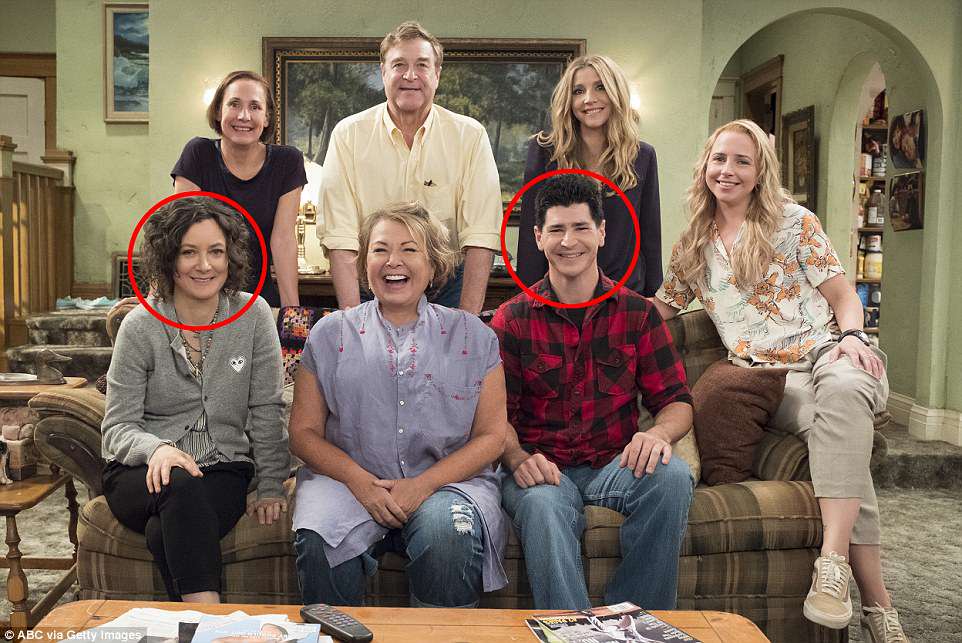 Family Drama: Barr first returned to Twitter Tuesday evening hours after she announced that she was quitting the social media platform 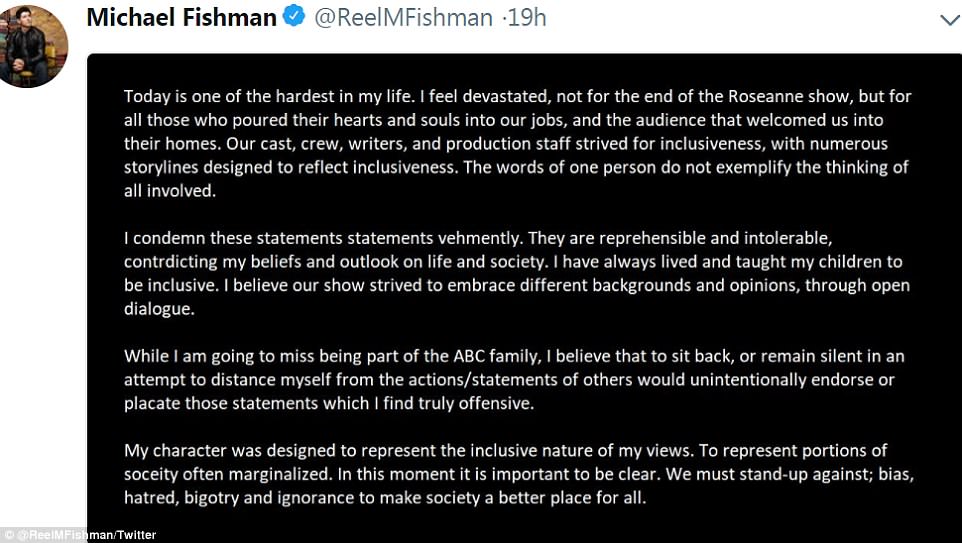 Mother and son: She first went after Michael Fishman, who has a black daughter on the show and said Barr’s racist tweet about Valerie Jarrett was ‘reprehensible and intolerable’ 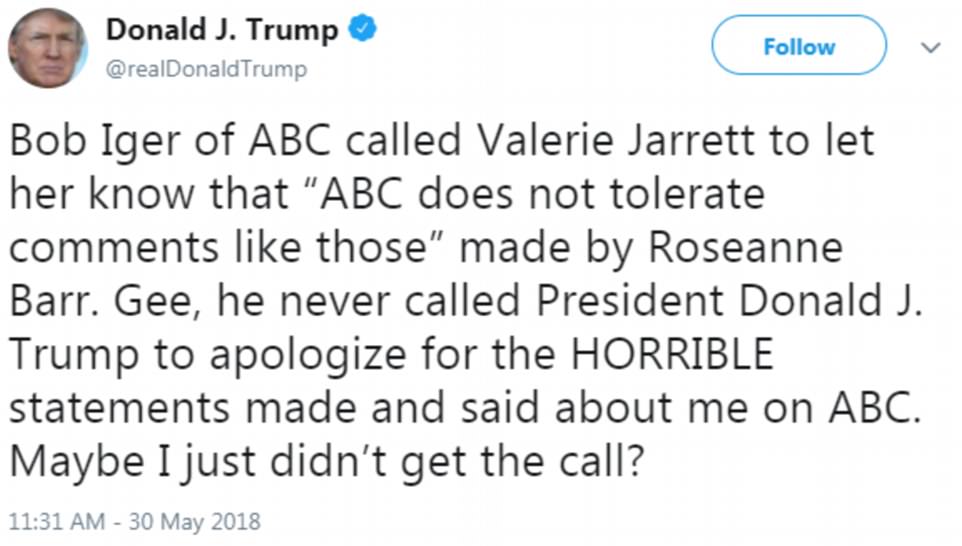 Commander-in-chief: President Trump complained that ABC president Bob Iger ‘never … apologized for the HORRIBLE statements made and said about me on ABC’

A downcast Gilbert was photographed on her phone outside an LA restaurant yesterday as John Goodman, who played Barr’s husband Dan on the show, looked similarly bereft as he walked his dog in New Orleans. 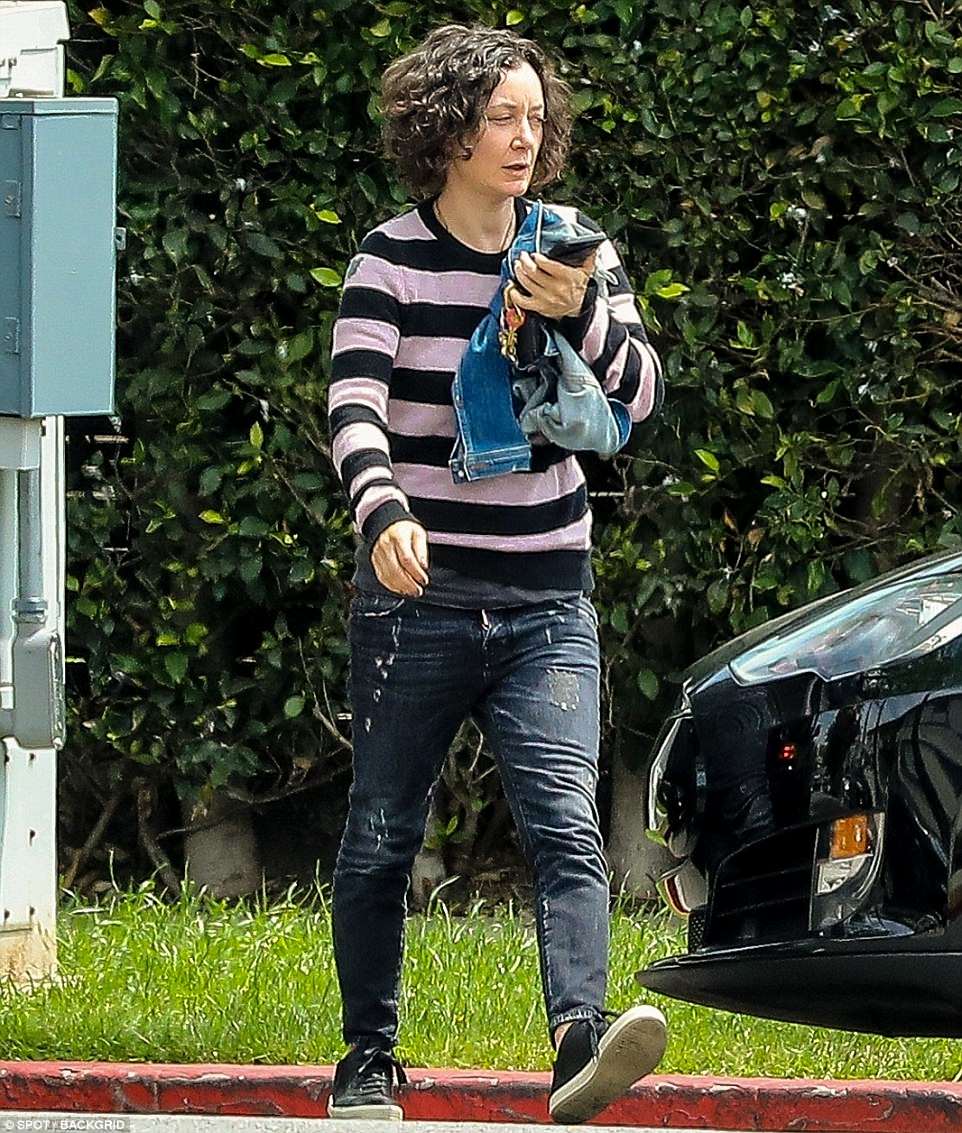 Gilbert, who played Darlene Conner on the series, had earlier slammed Barr’s tweets as ‘abhorrent’

Weighing in: Gilbert, who is a producer on the reboot, let her disgust be known on Tuesday

Mommie dearest: Barr was at first outraged but then adopted a more understanding tone about Gilbert’s tweet

Coming clean: She then confessed to one follower that she ‘f***ed up’

The stars all have some free time on their hands after ABC swiftly cancelled the series on Tuesday.

Consulting Producer Wanda Sykes may have been the final nail in Barr’s coffin. She tweeted saying she was quitting the show moments after the storm took off.

‘I will not be returning to @RoseanneOnABC,’ announced Sykes on Twitter.

Shortly after ABC Entertainment President Channing Dungey released a damning statement and took the show off the air.

Other networks including Viacom also dropped reruns of the original Roseanne as the industry turned its back on the show and its star performer.

Another cast member Emma Kenney said she was preparing to quit the show when she learned of the cancellation.

The commander-in-chief is on her side though it would appear.

Barr has made no secret of her affinity for President Trump, and he even called her the day after the show premiered to record ratings back in March.

President Trump himself also weighed in on Wednesday, writing: ‘Bob Iger of ABC called Valerie Jarrett to let her know that “ABC does not tolerate comments like those” made by Roseanne Barr. Gee, he never called President Donald J. Trump to apologize for the HORRIBLE statements made and said about me on ABC. Maybe I just didn’t get the call?’ 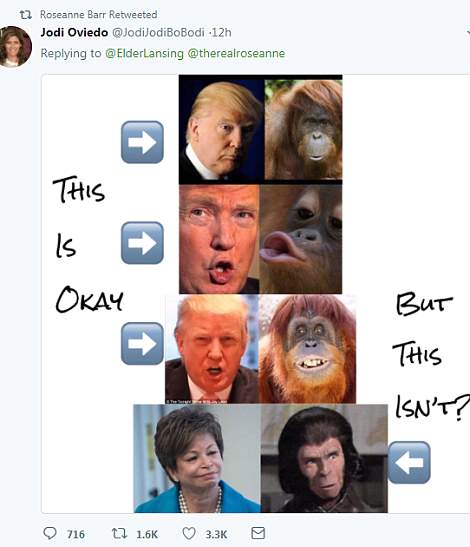 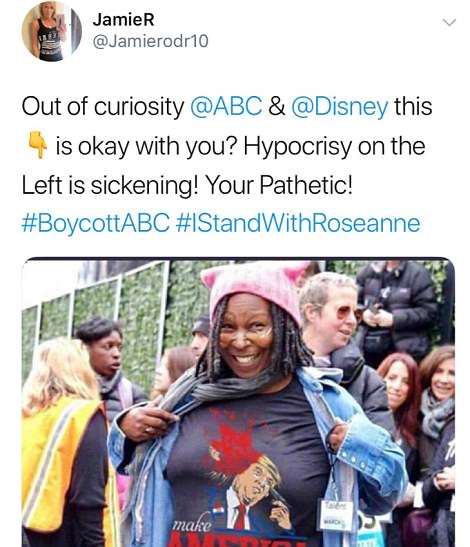 Fake news: Roseanne retweeted a number of posts that included offensive remarks and one of a doctored image showing Whoopi Goldberg (right)

Digging a deeper hole: Roseanne also shared posts to support her disdain for Soros which contained inaccurate information (above)

Her fans seemed to agree with that statement.

‘Maybe if Roseanne had just lied about what she tweeted, blamed non-existent “hackers” and stuck to what was obviously a bogus excuse for weeks, the media would have immediately forgiven her. Oh I forgot, she’s a conservative. Totally different rules,’ Paul Joseph Watson, editor-at-large of Infowars, said in a tweet that was retweeted by Barr.

‘Normal Americans are watching in absolute shock as leftist maniacs indulge in yet another political sacrifice. It won’t end well for you guys,’ one Twitter user named Thomas Wictor wrote to also be retweeted by Barr.

Barr also blamed taking Ambien for her ‘mistaken’ comments about Jarrett before saying she ‘thought she [Jarrett] was white’.

She even tweeted at Jarrett directly, writing: ‘i don’t know if u saw it, but I wanted2 apologize to u 4 hurting and upsetting u with an insensitive & tasteless tweet. I am truly sorry-my whole life has been about fighting racism. I made a terrible mistake wh caused hundreds of ppl 2 lose their jobs. so sorry!’

In another tweet, Barr told her fans not to defend her.

‘Guys I did something unforgivable so do not defend me. It was 2 in the morning and I was ambien tweeting-it was memorial day too-i went 2 far & do not want it defended-it was egregious Indefensible.’ 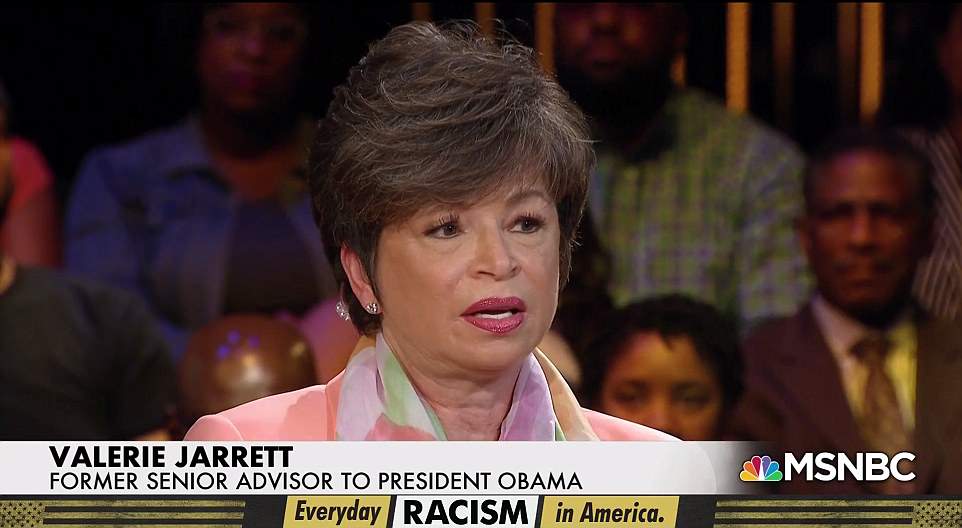 Victim: Valerie Jarrett was born in Iran to African-American parents, and her great-grandfather was the first credited African American architect

Explanation one: Barr said she though Jarrett ‘was Jewish and Persian’ amid a bizarre flurry tweets penned late on Tuesday night 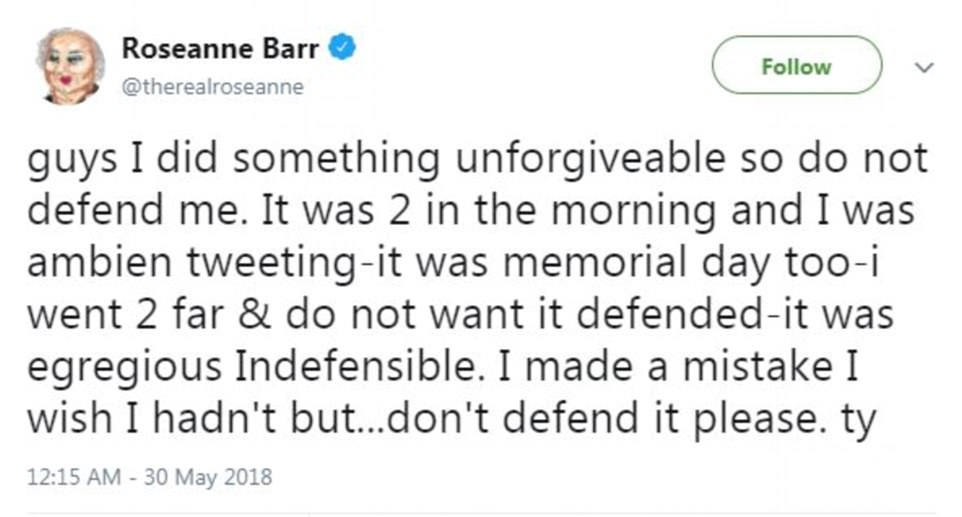 Quieting the crowd: Roseanne told her supporters to not try and defend her actions on social media

Post-rant apologies: She also released a general apology to Jarrett on Wednesday morning

When critics said Barr was using Ambien as an excuse, she got mad in several instances – saying she blamed herself not the drug.

‘no, i didn’t i blamed myself. stop lying. Yes, I have an odd ambien experiences on tweeting late at night-like many other ppl do. I BLAME MYSELF OK? it’s just an explanation not an excuse, Ok, bully?’ she responded in one instance.

Roseanne also tweeted early on Wednesday morning ‘I mistakenly thought she [Jarrett] was white’ and ‘I honestly thought she was Jewish and Persian’.

Jarrett was born in Iran to African-American parents and her great-grandfather was the first credited African American architect.

She said ‘the tone starts at the top’ during an MSNBC town hall with Al Sharpton, on Tuesday night, adding: ‘We like to look up to our President and feel as though he reflects the values of our country.’

‘First of all, I think we have to turn it into a teaching moment. I’m fine. I’m worried about all the people out there who don’t have a circle of friends and followers coming to their defense.

‘The person walking down the street minding their own business and they see someone clinging to their purse or walk across the street… or every black parent I know who has a boy who has to sit down and have a conversation, the talk as we call it.

‘Those ordinary examples of racism that happen every single day.’