Roseanne Barr was seen for the first time since her racist tweet about Valerie Jarrett led to the collapse of her multi-million dollar empire.

The disgraced television star was spotted out walking near one of her massive estates in photos obtained exclusively by DailyMail.com while engaged in an intense phone conversation.

When asked to comment on the recent controversy, Barr simply said: ‘I believe in one law for all people I love all people have a nice day.’

Shortly after Barr was spotted she took to Twitter and apologized to former castmates Sara Gilbert and Michael Fishman.

‘To michael fishman and sara gilbert: I forgive u both, love u both, just wish u could have called me personally 2 talk rather than do it in a public arena. I understand, tho. It’s ok,’ wrote Barr.

The actors, who play two of Barr’s children on the show, denounced the show’s creator on social media in the wake of her remarks on Tuesday.

Gilbert said Barr’s words are ‘abhorrent and do not reflect the beliefs of our cast and crew or anyone associated with our show.’

Rosie the riveter: Roseanne Barr was seen for the first time since her racist tweet about Valerie Jarrett led to the cancellation of her show in photos obtained by DailyMail.com (Barr above on Thursday morning) 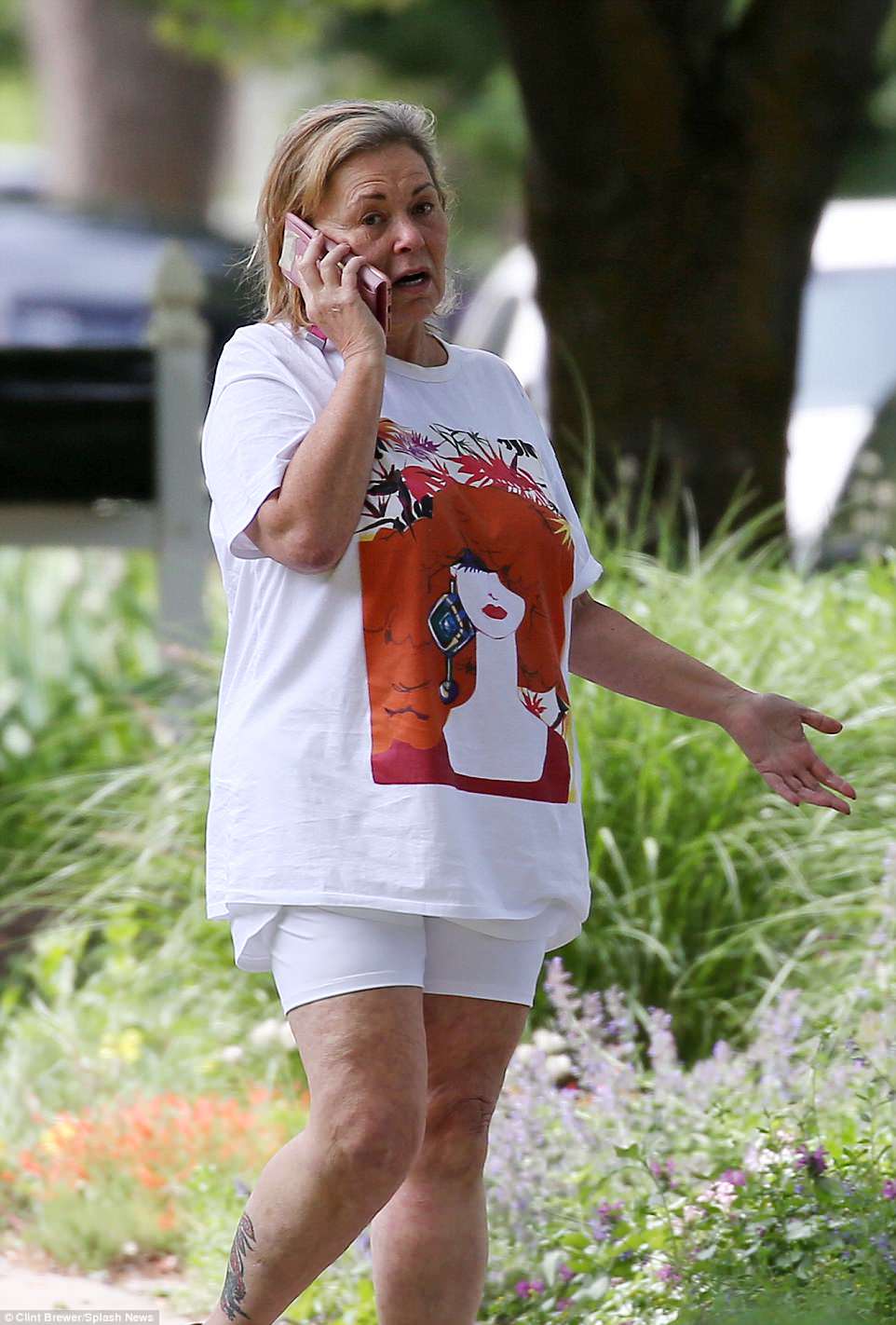 Keeping it under wraps: When asked to comment on the controversy she said: ‘I believe in one law for all people I love all people have a nice day’ 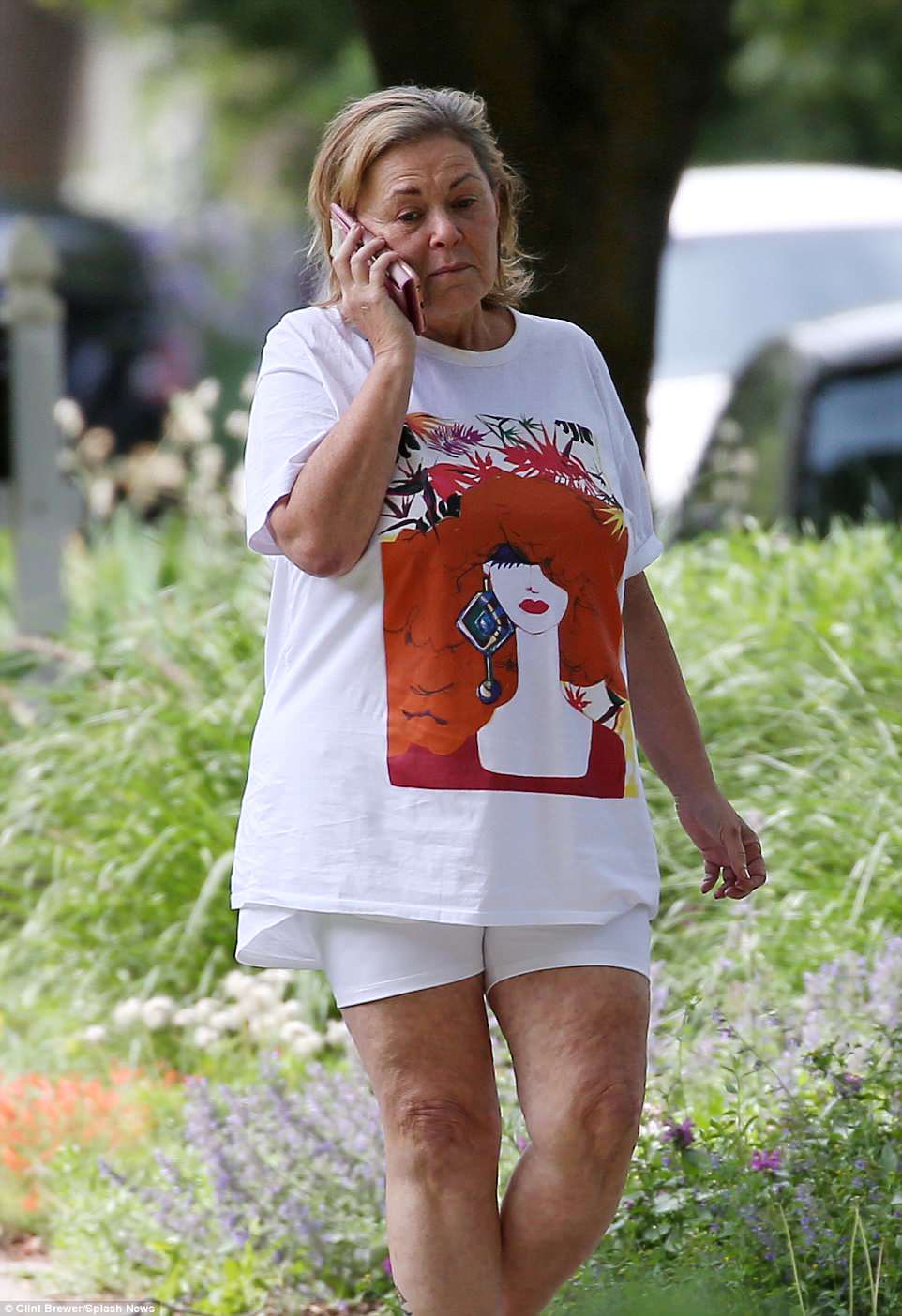 Deep in conversation: The disgraced television star was spotted out walking near one of her massive estates, where she has been hiding out the past few days 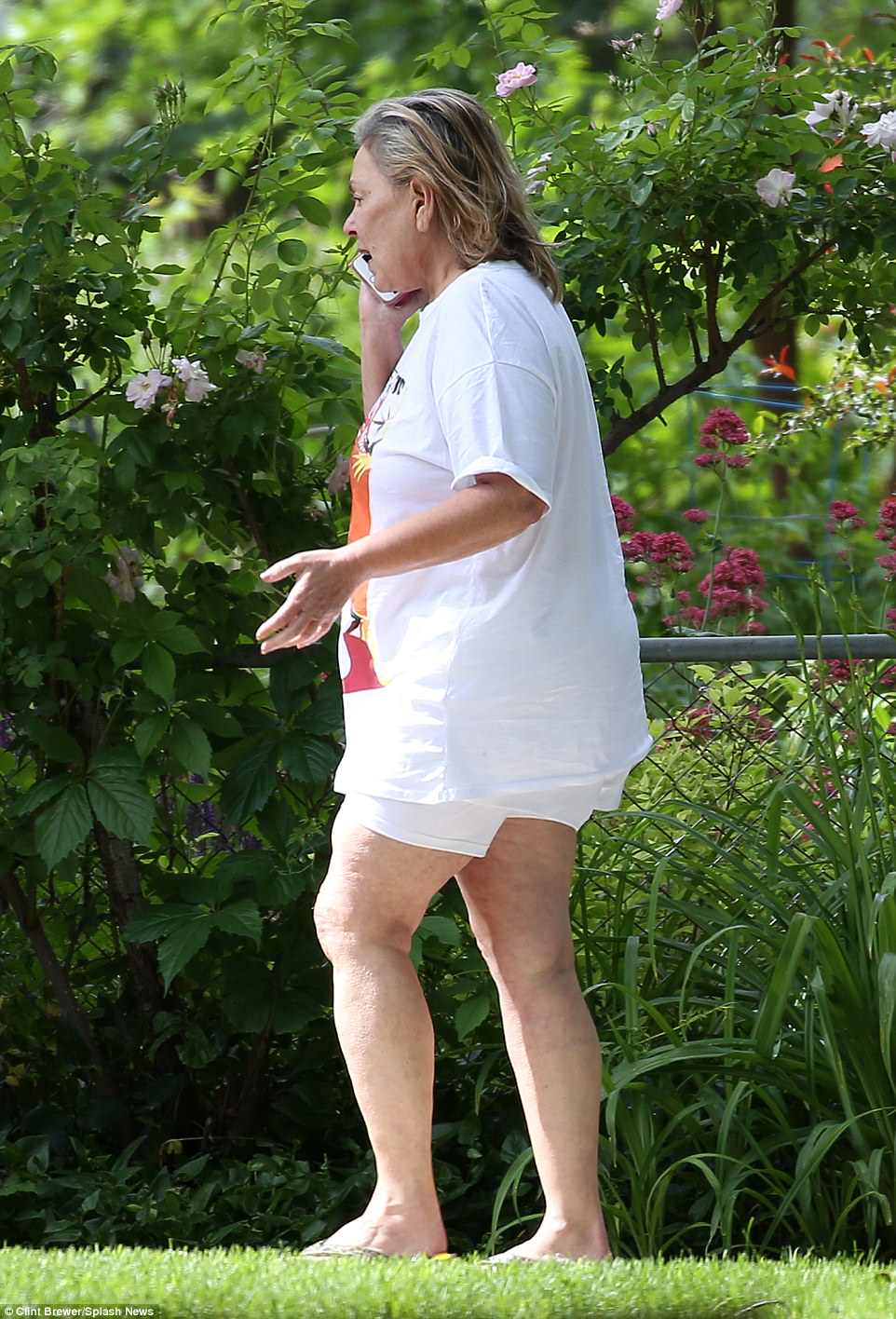 Difficult time:  Barr was set to get back to work on the set of her hit sitcom in the coming weeks after finishing the season as the second most watched scripted show 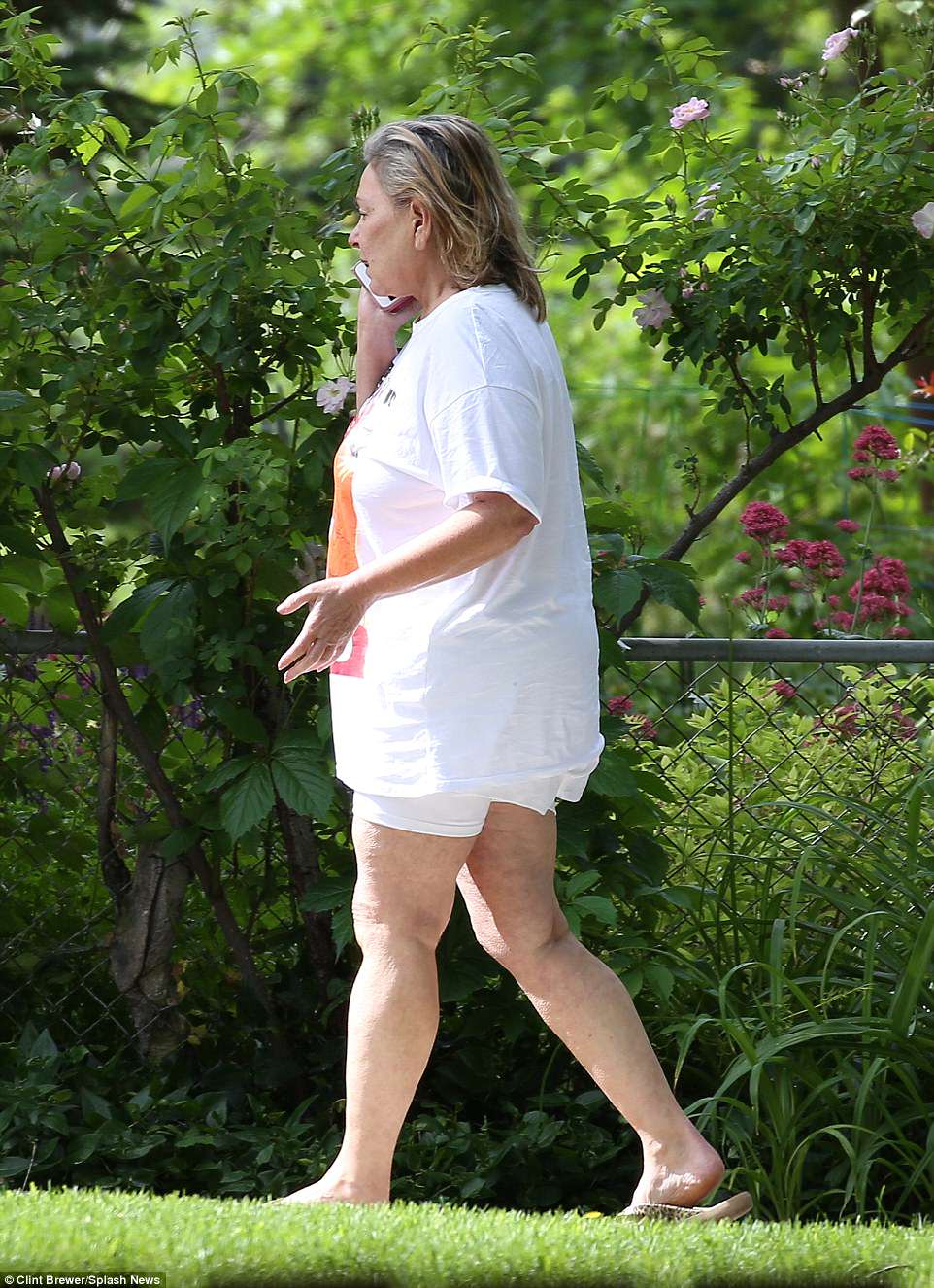 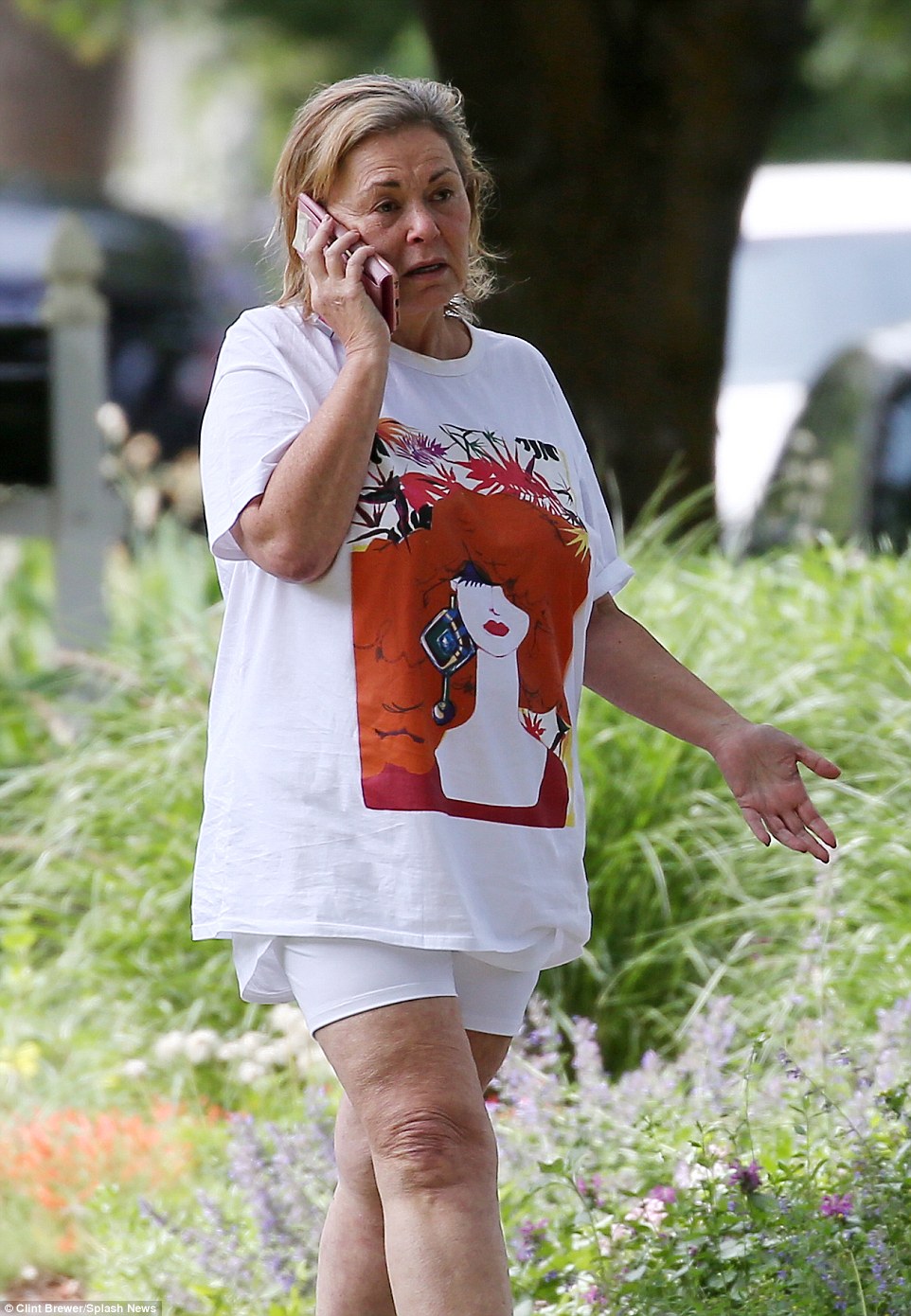 Roseanne Barr apologized to two of her co-stars on Thursday, a day after saying they threw her under the bus 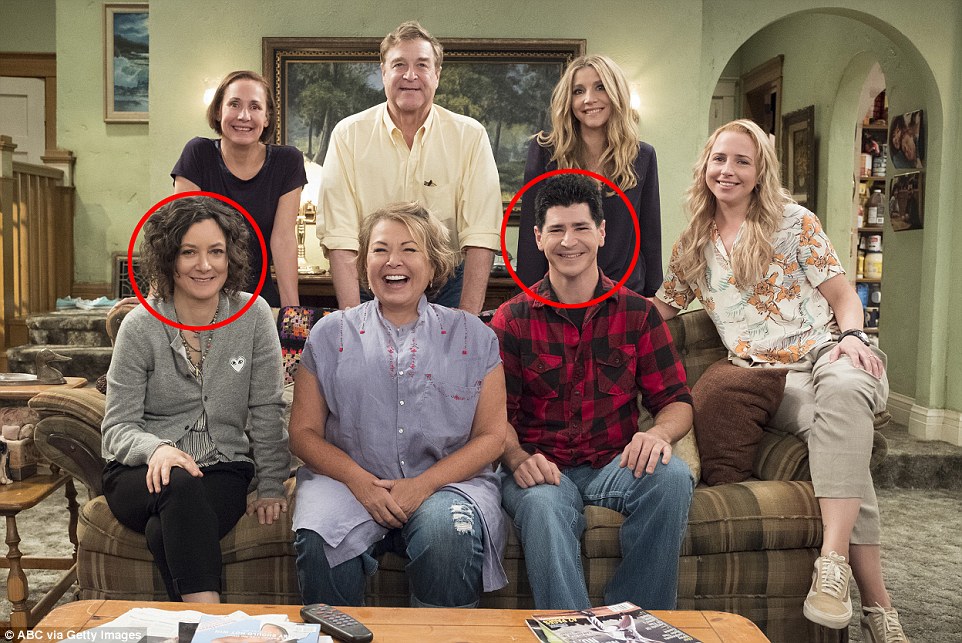 Fishman posted a lengthier message on his Twitter in which he detailed how ‘devastated’ he felt when he read Barr’s tweet.

‘I condemn these statements vehemently. They are reprehensible and intolerable, contradicting my beliefs and outlook on life and society. I have always lived and taught my children to be inclusive. I believe our show strived to embrace different backgrounds and opinions, through open dialogue,’ he wrote. 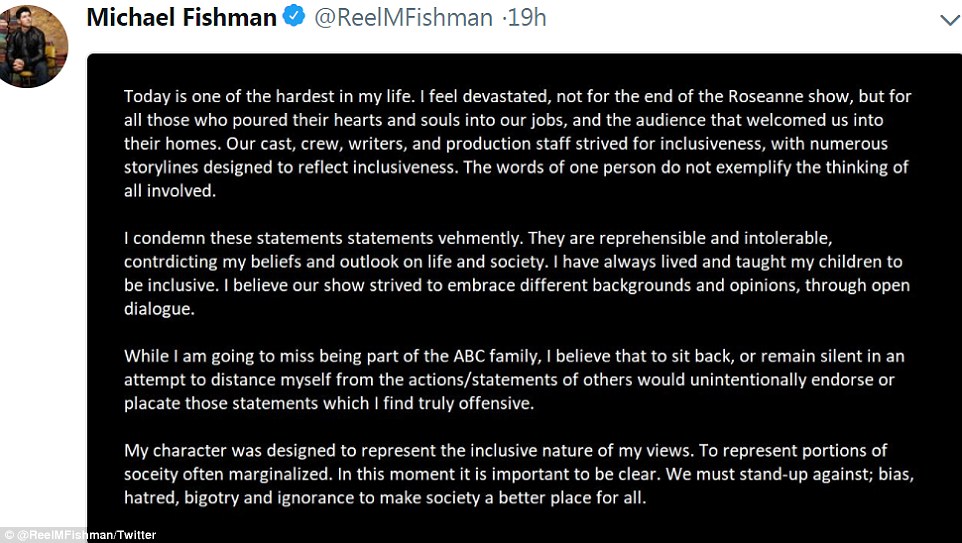 Barr was none too happy with Fishman’s statement, responding on Twitter: ‘I created the platform for that inclusivity and you know it. ME. You throw me under the bus. nice!’

A downcast Gilbert was photographed on her phone outside an LA restaurant yesterday as John Goodman, who played Barr’s husband Dan on the show, looked similarly bereft as he walked his dog in New Orleans.

The stars all have some free time on their hands after ABC swiftly cancelled the series on Tuesday.

Consulting Producer Wanda Sykes may have been the final nail in Barr’s coffin. She tweeted saying she was quitting the show moments after the storm took off.

Weighing in: Gilbert, who is a producer on the reboot, let her disgust be known on Tuesday

Mommie dearest: Barr was at first outraged but then adopted a more understanding tone about Gilbert’s tweet

Coming clean: She then confessed to one follower that she ‘f***ed up’

‘I will not be returning to @RoseanneOnABC,’ announced Sykes on Twitter.

Shortly after ABC Entertainment President Channing Dungey released a damning statement and took the show off the air.

Other networks including Viacom also dropped reruns of the original Roseanne as the industry turned its back on the show and its star performer.

Another cast member Emma Kenney said she was preparing to quit the show when she learned of the cancellation.