The Roseanne writing staff had just arrived at work on Tuesday for the first day of season two when they learned that the show had been cancelled by ABC.

There was still some great work being done however by one employee, with writer and executive producer Bruce Rasmussen deciding to take aim at those who were making light of the news which effectively left over 200 people without a job.

Actor Zach Braff was among them, posting a meme of himself crying in the tub on Twitter and writing: ‘When your show got canceled, but you’re not racist.’

That was a reference to ABC pulling the plug on his new sitcom Alex, Inc. after only one season.

Rasmussen responded to Braff’s remark by stating: ‘But your show sucked.’

Not having it: Bruce Rasmussen went after Zach Braff and Charlie Sheen after they joked about the cancellation of Roseanne

Shut down: Sheen then tweeted about a reboot of his CBS comedy Two-and-a-Half Men

Next up was Charlie Sheen, who shared his grandiose and very unlikely plan to get a Two-and-a-Half Men reboot on the air now that Roseanne was over.

‘Adios Roseanne! good riddance. hashtag NOT Winning. the runway is now clear for OUR reboot,’ wrote Sheen, sharing a copy of a season four script from the CBS show.

Rasmussen will be staying on at ABC despite the cancellation, along with Dave Caplan and Bruce Helford.

Caplan revealed that news to The Hollywood Reporter while detailing how the staff learned about the show’s demise.

He also shared their response to Barr’s tweet about Valerie Jarrett.

‘The reaction was universal disgust. That tweet doesn’t reflect anything to do with our show, which was built on trying to explore a universal humanity that everyone goes through during hard times and difficult circumstances,’ said Caplan. 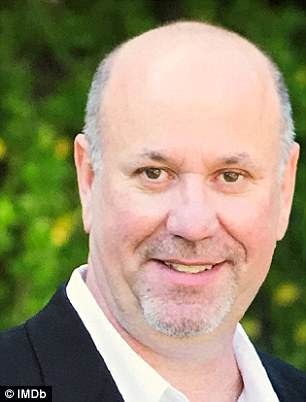 ‘We all felt the same thing about the tweet: We were horrified by it and we also knew what it meant for the show. So there was a sadness about it, too, for us.’

Helford also released a statement in the wake of the news, saying: ‘On behalf of all the writers and producers, we worked incredibly hard to create an amazing show.

‘I was personally horrified and saddened by the comments and in no way do they reflect the values of the people who worked so hard to make this the iconic show that it is.’

A former writer on the show, Danny Zuker, worded his response in a slightly different manner.

‘Hard to believe a woman who supports a man who calls nazis “very fine people,” would turn out to be a miserable racist bag of s***. I’m definitely team @wandasykes!’ wrote Zuker, who is now a producer on Modern Family.

‘I wrote on the original “Roseanne” where we used to denounce nativism, racism & homophobia. Nauseating to see what she’s become. Looking forward to continue not watching this show.’