A young woman who wielded a bunch of red roses in a wild racecourse brawl claims she was trying to defend her father, brother and boyfriend when they were set upon as they left the racecourse.

The extraordinary photographs showing Hayley Luke, 19, wielding a bouquet of flowers during an out-of-control melee at Rosehill Racecourse, in Sydney’s west, on Saturday went around the world.

Ms Luke had come to the aid of her father Steve, 43, who alongside son Nathan, 23, and Hayley’s boyfriend Ryan Connell, 21, after they were caught up in the violent fight after a day of celebrations at a Christmas party.

The three men could be seen in pictures pushing and shoving with a rival group resulting in bloodied faces, ruined pants, ripped shirts and a date before the courts.

Family matriarch Sharyn Luke, 42, who was with the group throughout the day but had already hopped on a bus to get home when the brawl began, said the family still has no idea what led to them being caught up in the trouble.

But she insisted her daughter was only coming to the aid of her father when she stepped in, armed with the roses.

Despite not throwing a punch, Hayley Luke (right) became the face of the incident for her desperate efforts in coming to the aid of her father Steve (centre) after he was knocked to the ground while trading blows Brandon Walker (left) 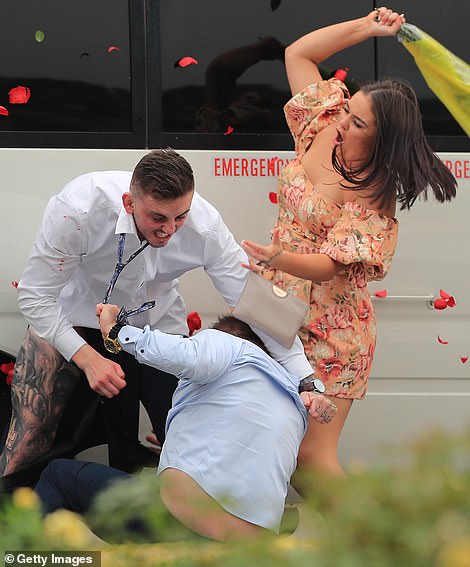 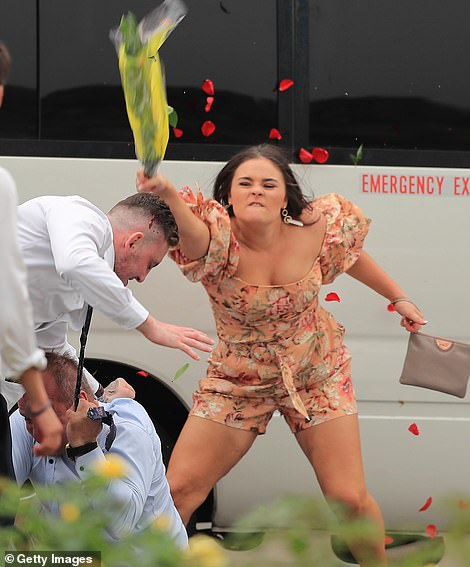 Ms Luke sent petals flying through the air when she used a bunch of red roses to hit Walker over the head. Her mother Sharyn told Daily Mail Australia: ‘She was not aggressive in any matter, it was simply an attempt to stop the man hitting her dad…’

‘To see somebody beating the living daylights out of her father, she was just trying to stop him and get him off him – she’s never attacked anyone,’ Mrs Luke said.

‘She was not aggressive in any matter, it was simply an attempt to stop the man hitting her dad… what’s a bouquet of flowers going to do to someone?

Mr Luke said he didn’t want to ‘stir the porridge’ over the brawl, but also defended his daughter.

‘Well she saw that was me on the ground and I guess she thought she’d help out. It wasn’t us that started it, but I don’t want to do anything about it…’ he said.

‘We’re all OK and it didn’t ruin our Christmas party.’

The brawl erupted as thousands of punters left Rosehill Racecourse after a long day of festivities.

A photographer standing nearby took a series of photos as the violent struggle erupted, with security guards seen watching on helpless to stop what has since been dubbed ‘the war of the roses’.

Hours earlier the Luke clan sat and smiled at a table inside the racecourse grandstand, where they were enjoying a catered lunch while looking over the track.

Mrs Luke said her family was aware of the attention the incident had got on social media, saying: ‘It certainly hasn’t been an easy few days’.

She claimed she had sat her family down and asked what had sparked the brawl, but it remained a mystery. 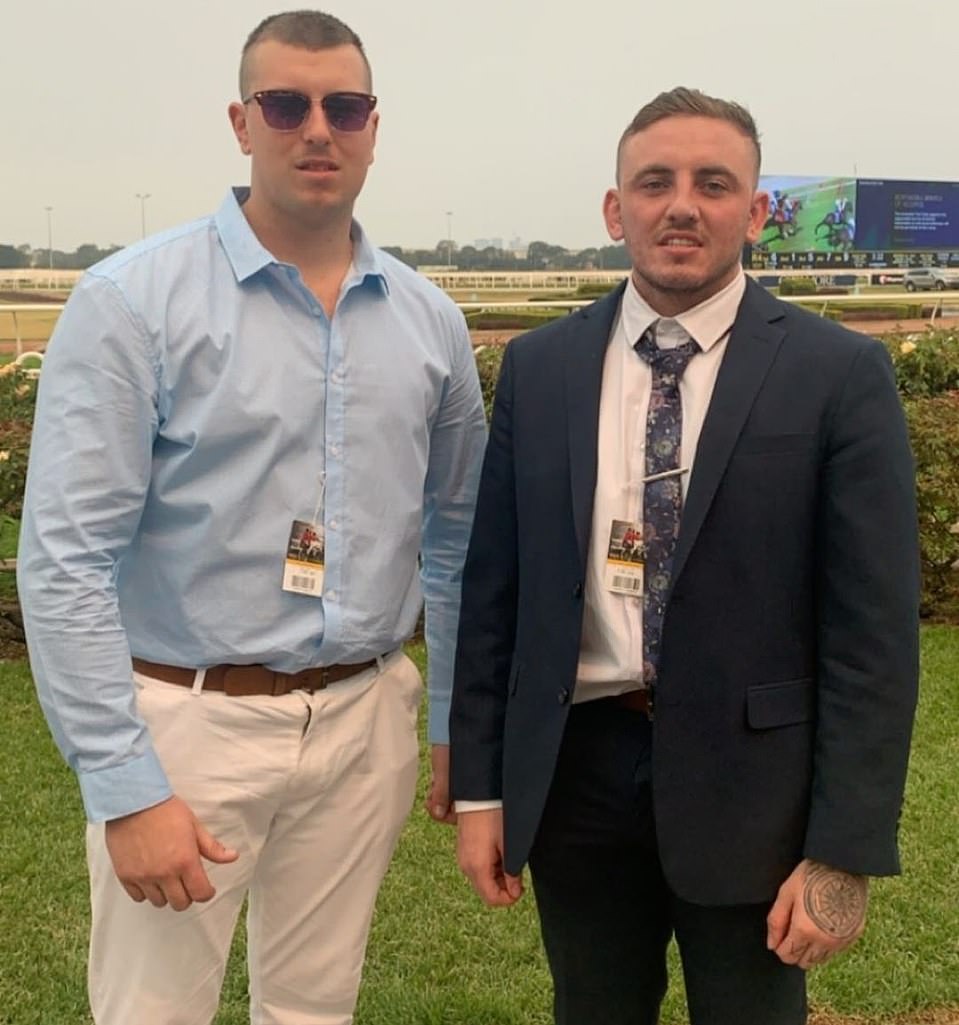 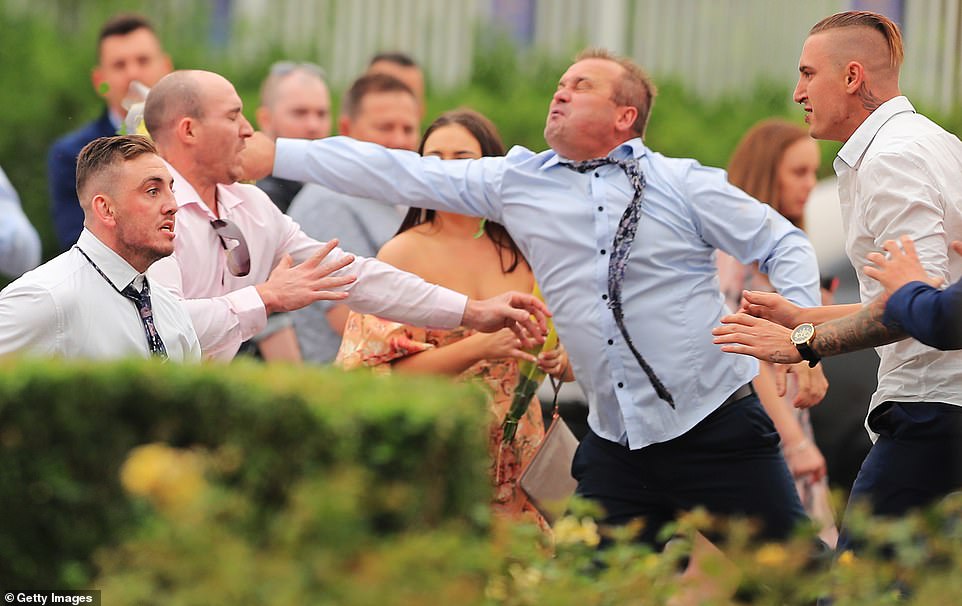 Mr Luke (centre) sees his tie go flying in the wind, while Brandon Walker (bottom left) looks in the direction of Nathan Luke (off screen to the right) 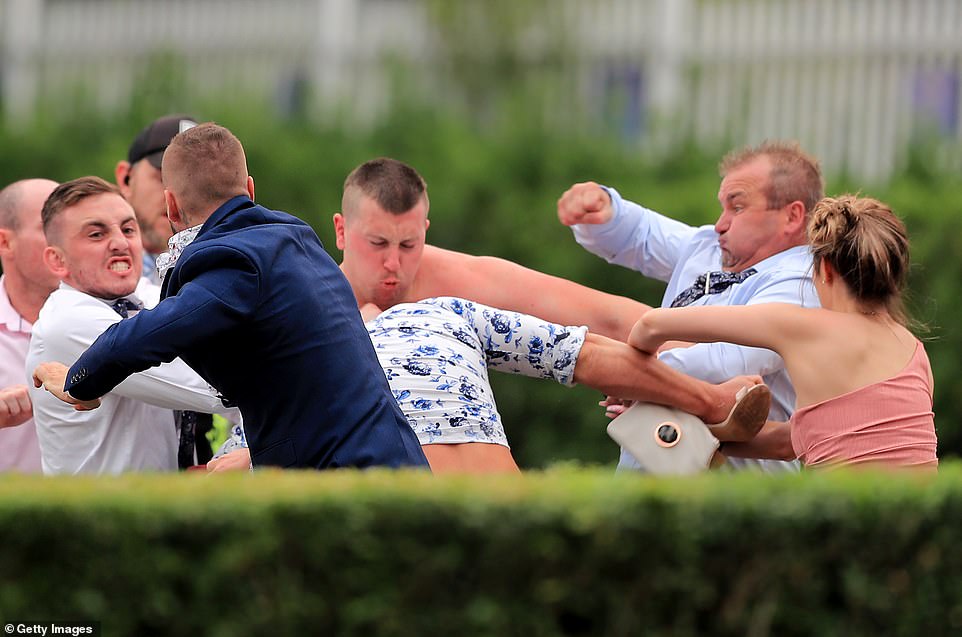 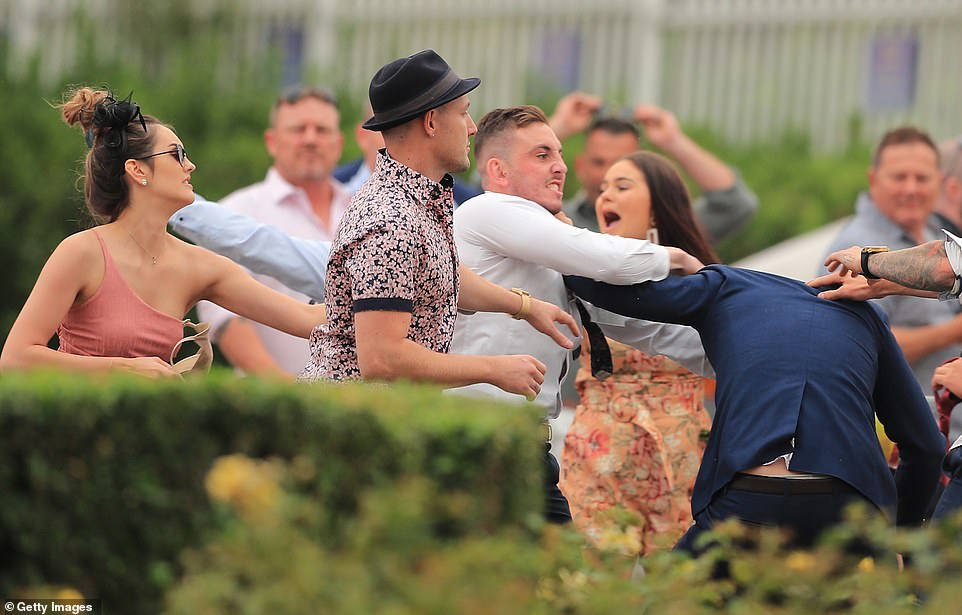 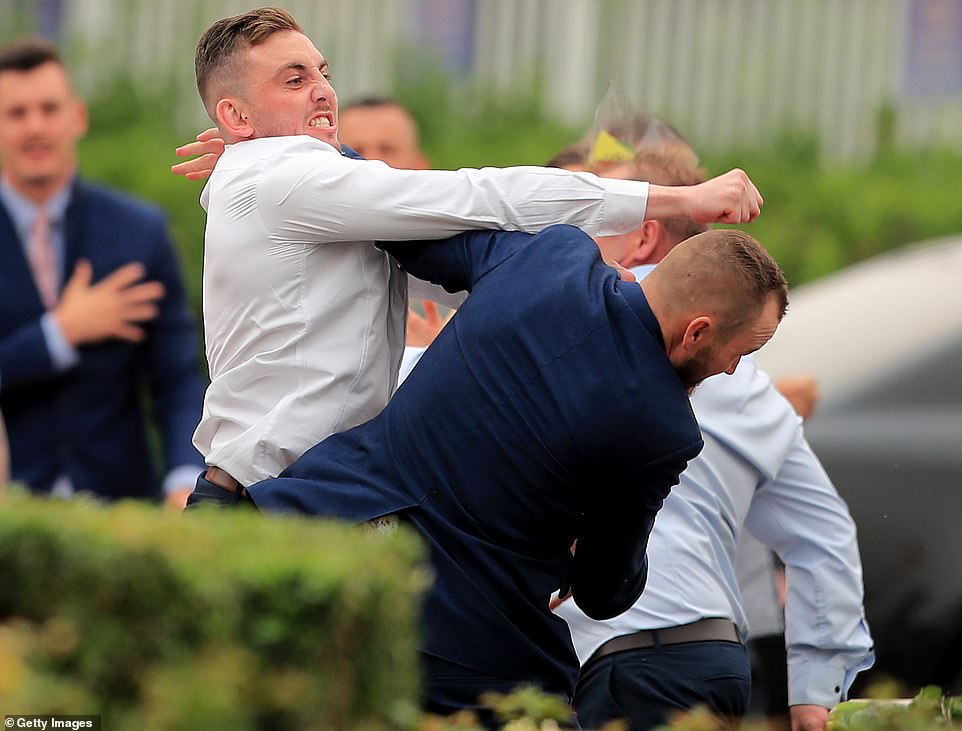 ‘We were on our way out, that day was over, everybody was there with partners, it wasn’t just a boys day out, it was all couples – married couples, fiancees,’ Mrs Luke said.

‘There is no clear recollection of what and how this happened.

‘I pulled every person together and said to them ‘how did this happen?’ and their words are ‘that they do not even know’… it’s honestly a blur.’

By the time police arrived at the Australian Turf Club venue most of those involved had left the racecourse.

Police chased down and boarded the hire bus the the Lane group was in, before issuing court attendance notices to six men.

Mr Luke, his son Nathan and a family friend were all charged with affray over the incident.

So too were rising country rugby league star Brandon Walker, his friend Bailey Petrie and another man. 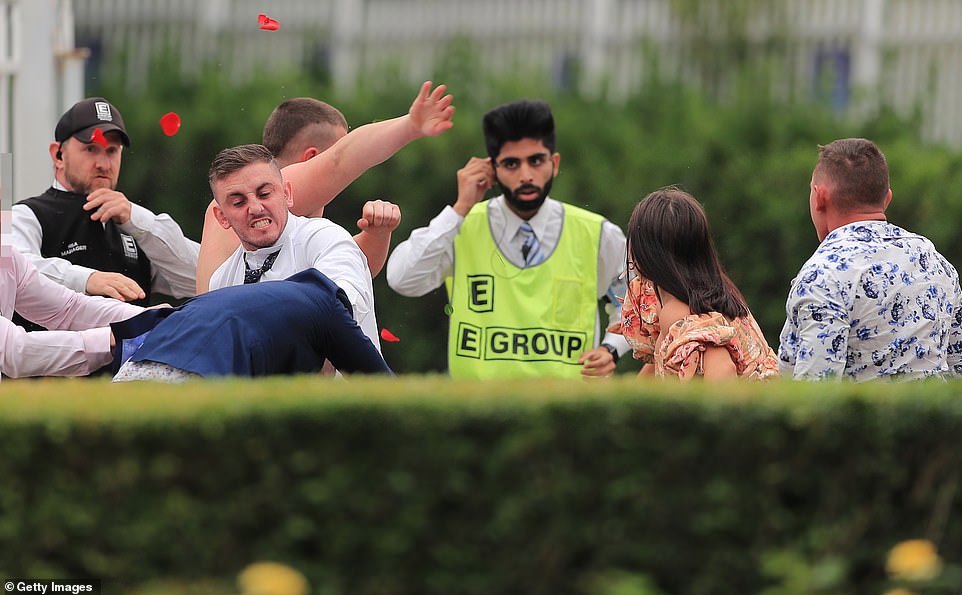 Security guards watch on, helpless to stop the Rosehill Racecourse brawl that has since been dubbed ‘the war of the roses’ 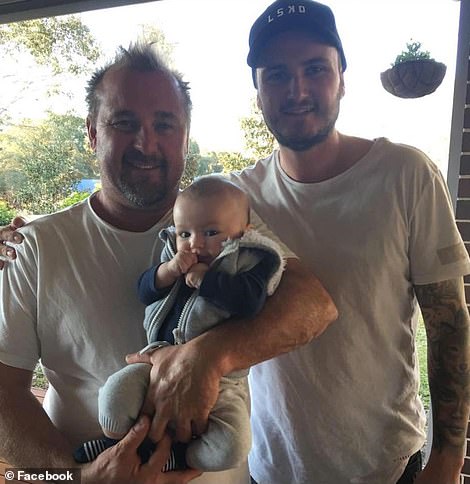 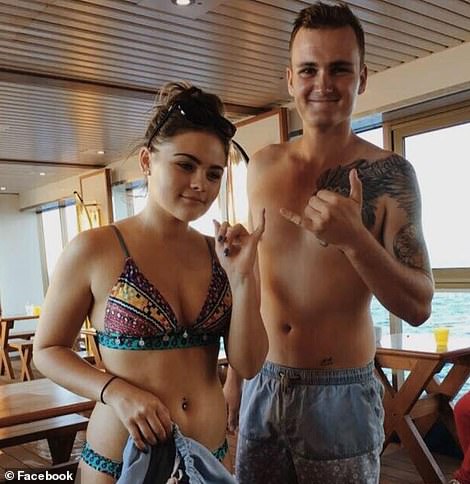 Steve Luke (left) told Daily Mail Australia he and his son Nathan (pictured) hadn’t started the fight, while also defending his daughter Hayley (right), saying: ‘She saw that was me on the ground and I guess she thought she’d help out.’

Walker was the man hit over the head with Ms Luke’s red roses as he let fists fly during a scuffle with her father.

When the two groups were finally separated by security, Walker’s pants were ripped wide open exposing a lengthy tattoo on his right leg.

The two mates joked about the brawl on Instagram on Sunday, with Walker telling his mate Petrie: ‘Love ya snails but I’m buckled’.

Another friend of the pair commented: ‘This turned into a solid day out…’