Over the weekend, Roxy Jacenko spoke about her rocky marriage to Oliver Curtis during a no-holds-barred interview with Channel Seven’s Sunday Night.

And just hours before the show aired, the PR queen was pictured comforting a visibly upset Jackie ‘O’ Henderson near her home in Sydney’s Bondi.

The radio host, 43, announced her split with husband-of-15-years Lee last month, and it is quite possible the pair were discussing relationship woes.

Sharing tips on how to get through a rocky marriage? Roxy Jacenko (right), 38, comforted an upset Jackie ‘O’ Henderson (centre), 43, on Sunday, following her split from husband Lee

Jackie, who enjoyed lunch on the balcony of Roxy’s North Bondi home with her eight-year-old daughter Kitty, was seen being consoled by the publicist.

At one stage, Roxy placed an affectionate hand on Jackie’s shoulder.

Jackie appeared grateful for the sympathetic gesture and smiled warmly after her friend offered some supportive words. 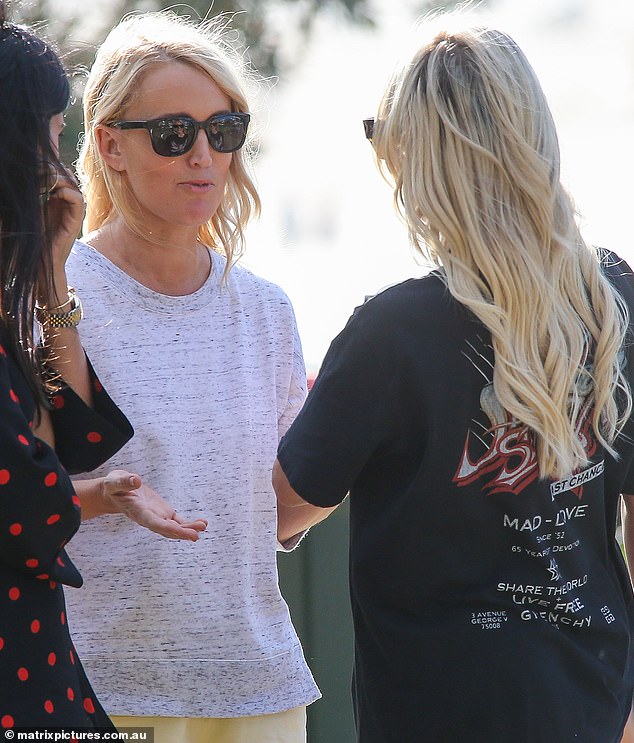 Supportive: Jackie, who enjoyed lunch on the balcony of Roxy’s North Bondi home with daughter Kitty, seven, was seen being consoled by the publicist 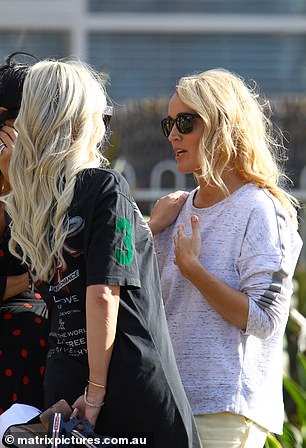 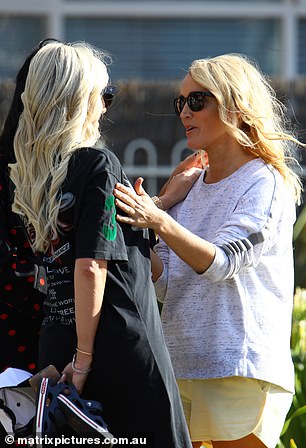 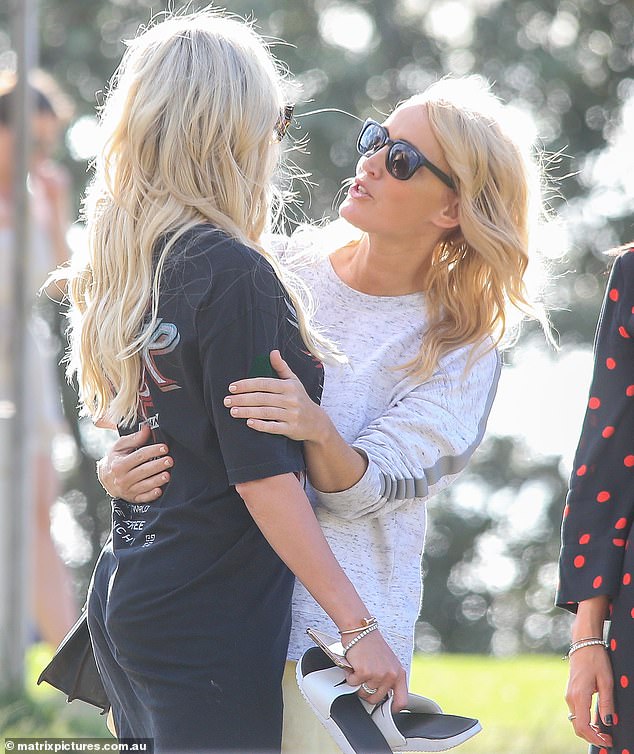 Jackie dressed casually for the occasion in a grey sweater, which she paired with pastel yellow linen shorts and white sneakers.

The two women were seemingly engaged in a deep conversation, which isn’t surprising since they have quite a lot to talk about. 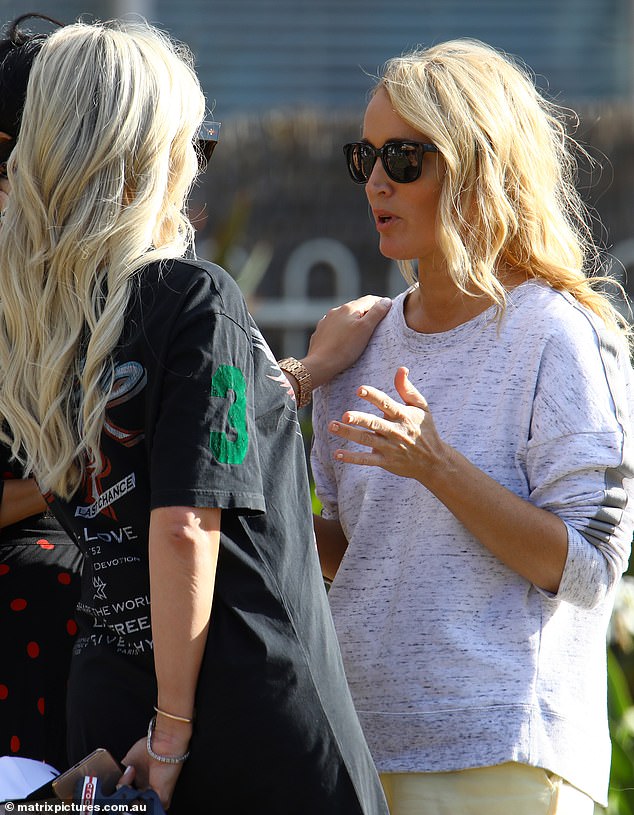 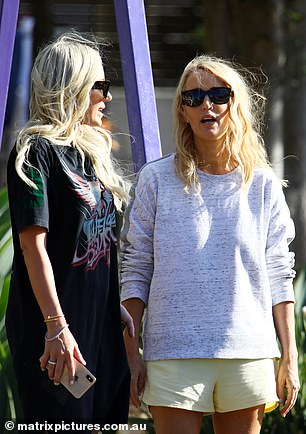 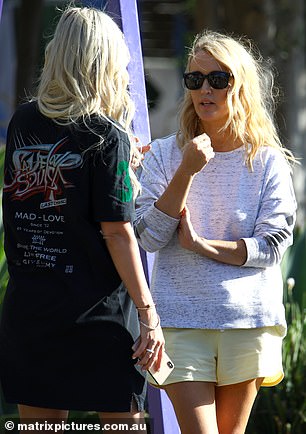 Heart to heart? The blonde pals engaged in deep conversation 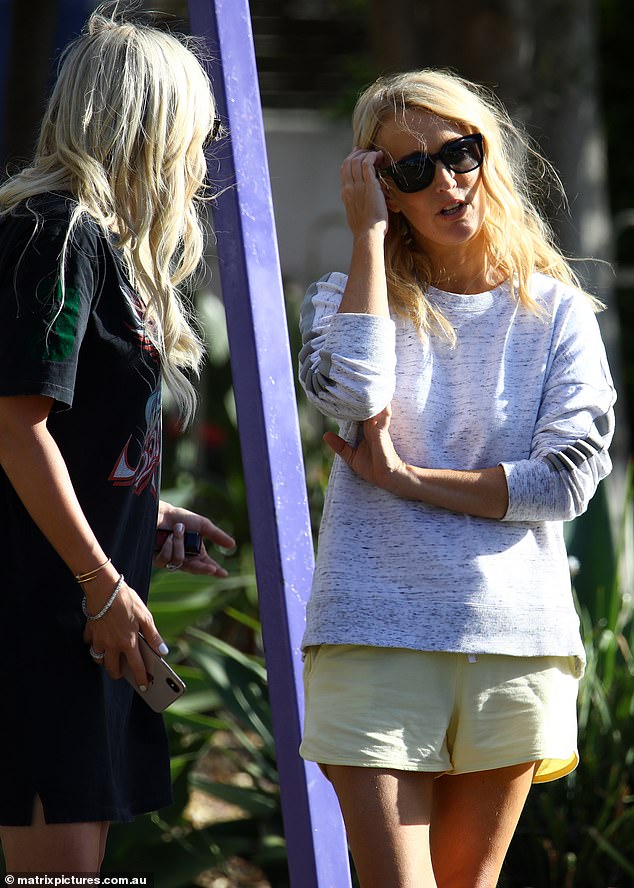 Concerned expression: At one stage, Jackie rested her head on her hands as if in deep thought

Jackie listened intently, before the pair took their children to a nearby park.

Roxy’s daughter Pixie, seven, was seen holding onto Jackie’s daughter Kitty’s hand as they ran over to the swings.

Following the outing, Jackie took Kitty back to the family home in Vaucluse, where her estranged husband Lee is currently living. 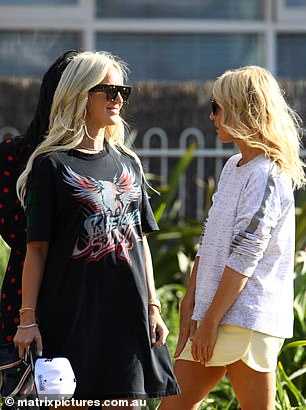 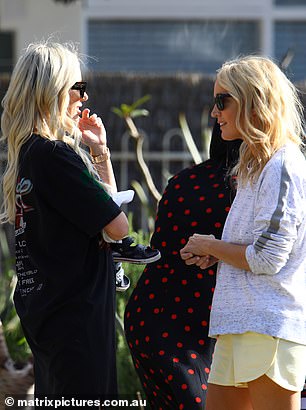 That smile: Roxy’s company looked to be uplifting Jackie’s spirits 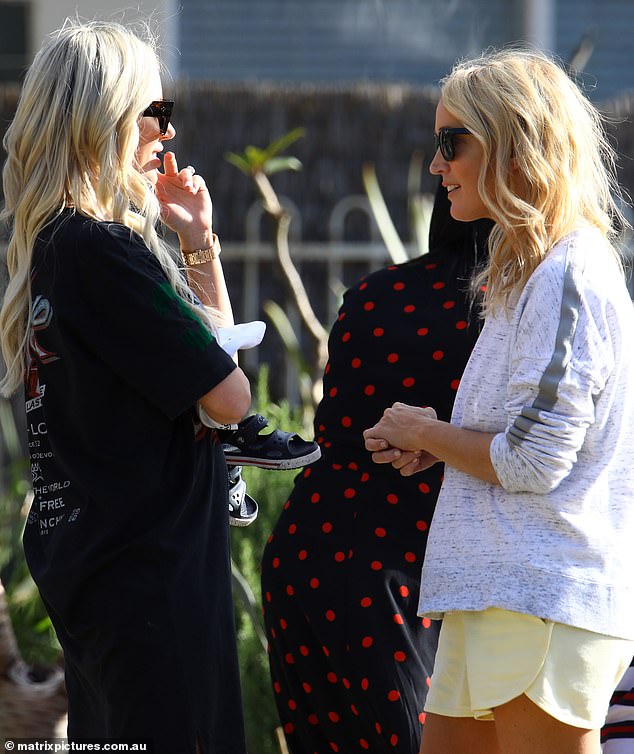 Tresses: Jackie allowed her blonde locks to flow freely in the summer breeze, framing her face 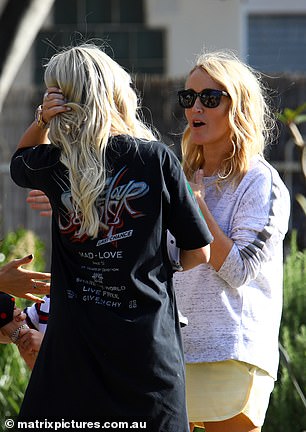 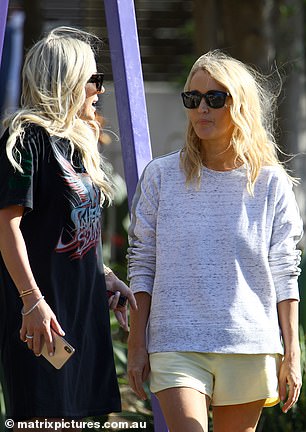 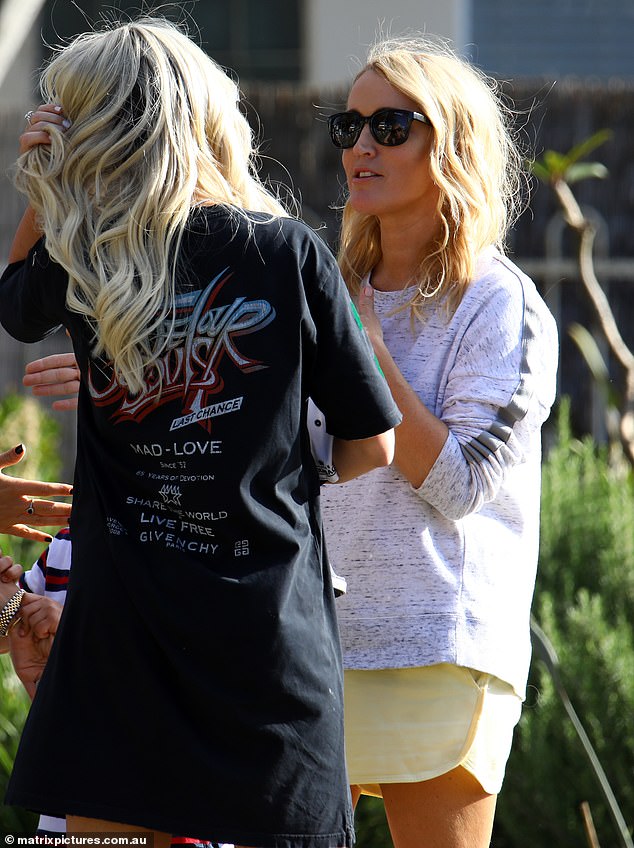 Blonde beauty: Roxy ran one hand playfully through her tresses as she chatted away with Jackie

Jackie shocked fans last month on the Kyle and Jackie O show, when she announced her split with Lee, after 18 years together. 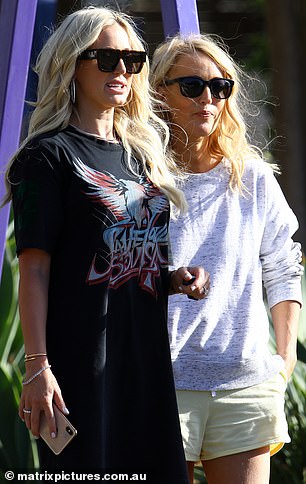 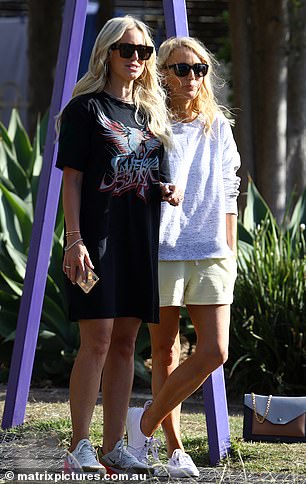 Out and about: The pair later took their children down to a local park 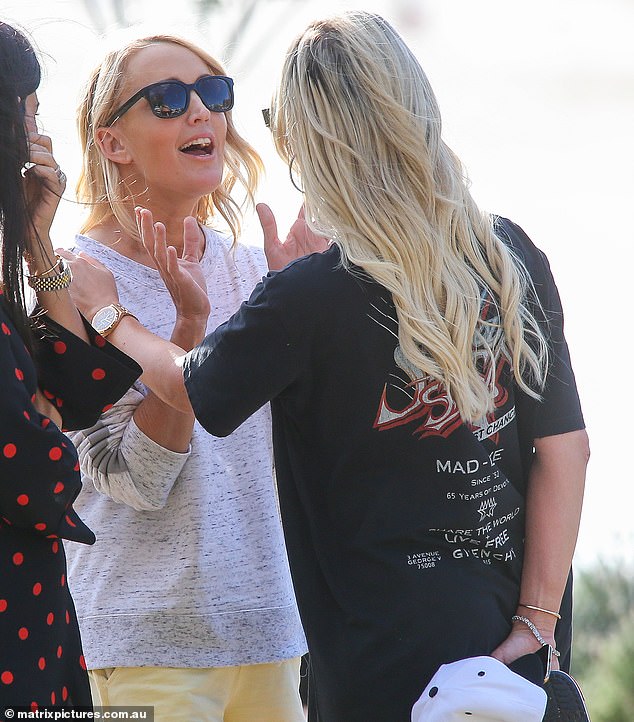 Animated: The radio personality was seen pulling an animated gesture at one stage 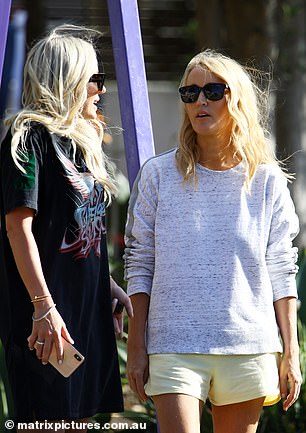 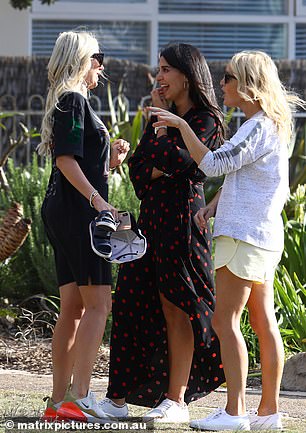 Social: Roxy and Jackie were joined by a brunette pal down at the park

‘It’s not a decision we took lightly at all,’ she revealed. ‘We have been so lucky that our separation has been extremely amicable. And I know everyone says that, but we actually have remained really good friends throughout all this.’

Jackie added that they still ‘talk everyday on the phone’ and ‘hang out as a family’ with their daughter Kitty, who is coping well amid the separation. 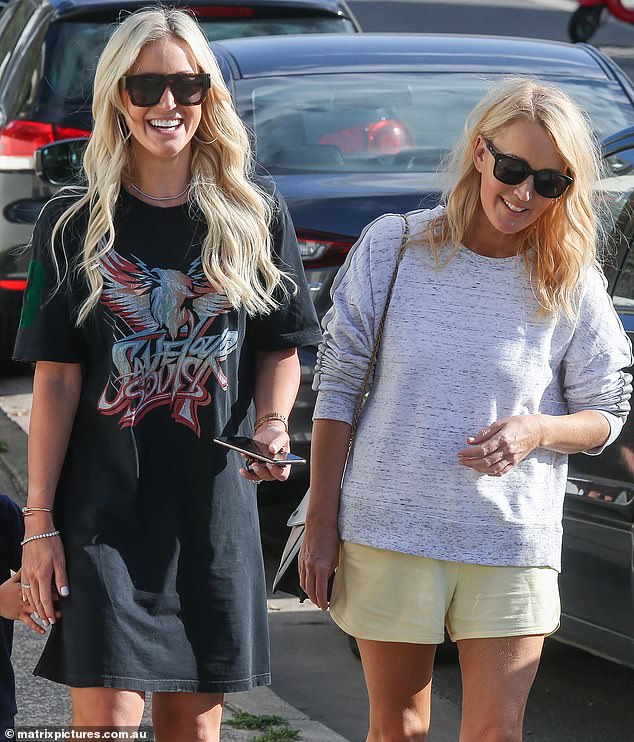 Smiles: The Sydney notables beamed as they walked along a street in North Bondi 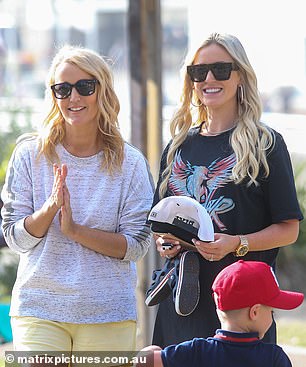 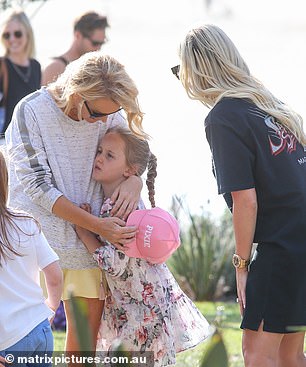 The business mogul was left to raise children Pixie and Hunter, four, on her own in 2016, when Oliver was convicted for conspiracy to commit insider trading.

During Oliver’s time behind bars, Roxy was diagnosed with breast cancer, and admitted that she was in such a dark place that she indulged in alcohol and drugs. 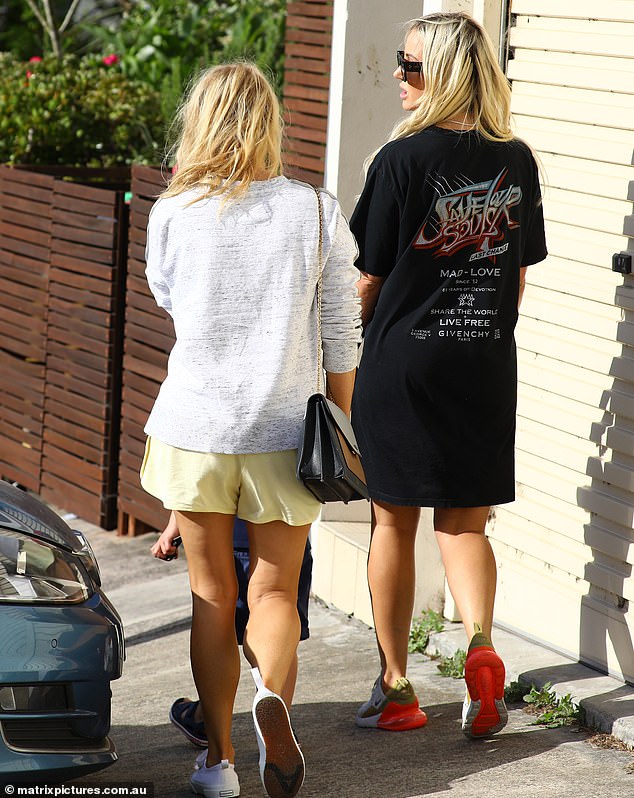 On the go: The group enjoyed the most of Sydney’s summer weather 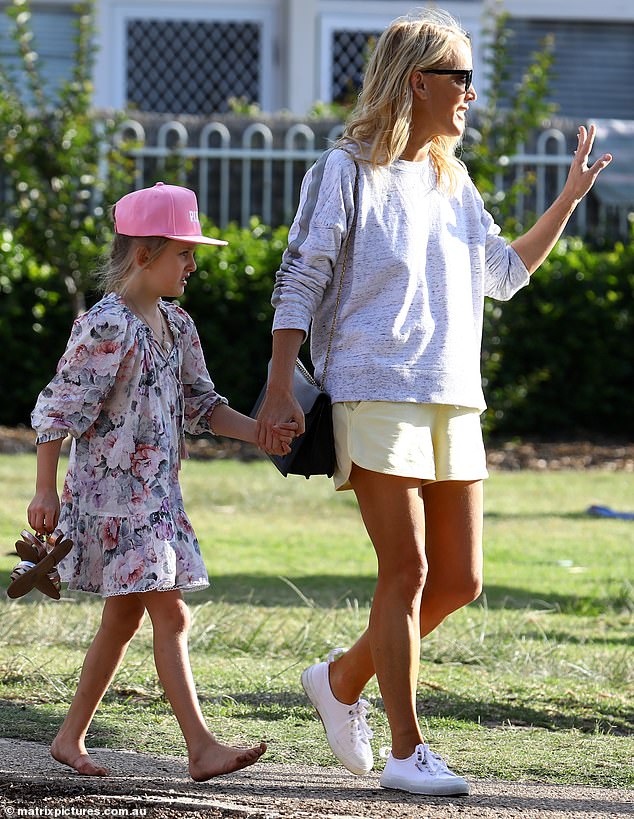 Heading home: Following the group outing, Jackie took Kitty back to the family home in Vaucluse, where Lee is looking after Kitty