She has been embroiled in a bitter feud with her former friend Candice Warner since appearing on SAS Australia.

And in very coincidental timing, 40-year-old PR guru Roxy Jacenko showed off a very rude gag gift while ‘unboxing’ on her Instagram account on Wednesday.

The 40-year-old took a photo of a set of pens emblazoned with a range of ‘F**k’ messages.

Message for Candice? Roxy showed off a very rude gag gift while ‘unboxing’ on her Instagram account on Wednesday

It comes after she revealed to Daily Mail Australia that her friendship with Candice Warner will never be repaired after the WAG reached out to her this week. 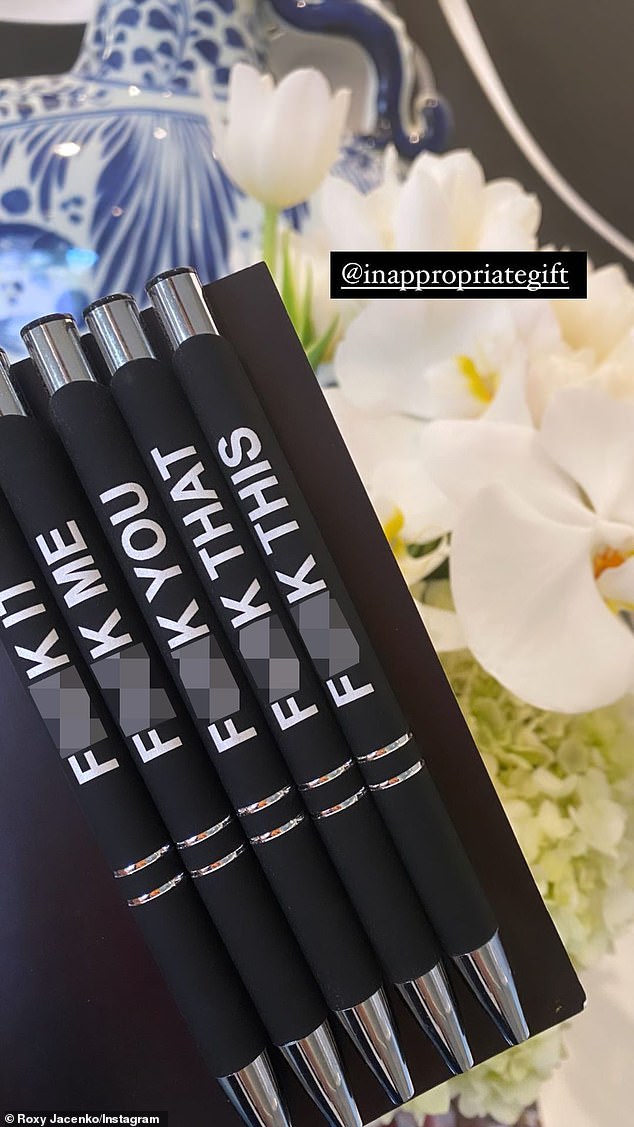 Roxy said Candice, 35, would be ‘delusional’ to think the pair could ever be pals again, after they fell out during a boxing challenge on SAS Australia.

Roxy seethed: ‘Someone who carries on punching you when your back is turned, and then sacks you some two weeks later as management after four years of hard work and support would need to be delusional to think I would want to be friends!’

‘She might be hard up for friends and accept people doing that to her, but that’s not a friend I’m interested in keeping,’ she added. 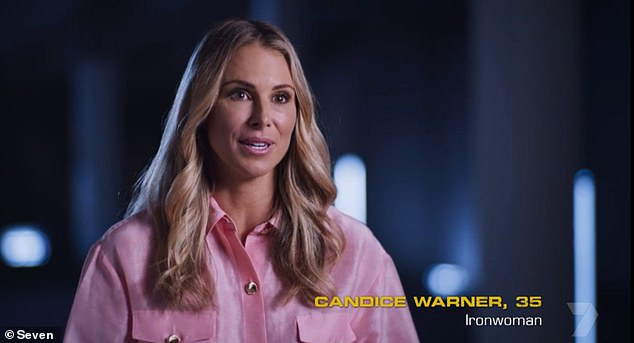 Mending fences? Earlier in the day, Candice said she was ‘so disappointed’ by the pair’s feud and was ready to kiss and make up on The Kyle and Jackie O Show

On Wednesday, Candice said she was ‘so disappointed’ by the pair’s feud and was ready to kiss and make up on The Kyle and Jackie O Show.

‘Now that time has passed… it was never an intention, and I’d never want to lose a friend over something like this. I’m sorry she feels like this,’ she had said.

When asked by Kyle Sandilands if she wanted to make friends, she said: ‘Of course I do. From my end there’s no dramas whatsoever. 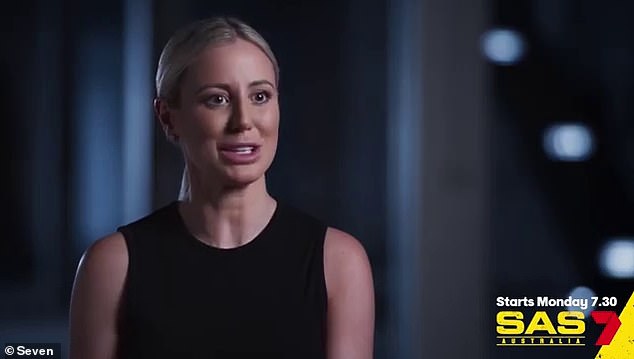 Not today! Roxy sensationally said she’ll never be friends with Candice Warner again on Wednesday, after the WAG reached out

‘It was more a business friendship… She’s a good person, she’s got a family.’

Roxy’s good pal Jackie ‘O’ Henderson said she believes the pair can ‘sort things out’, to which Candice replied: ‘Absolutely. We can deal with it.’

Last month, Roxy officially ended her friendship with Candice after they competed in a brutal boxing match on the military-inspired show. 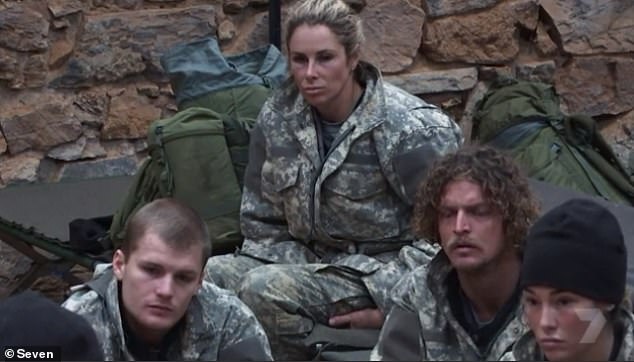 Not happy: Candice (pictured on SAS Australia) has admitted she’s still ‘disappointed’ about her ongoing feud with Roxy, months after the two fell out following the show

Roxy explained on The Kyle and Jackie O Show that she no longer considers Candice a friend after the women were pitted against each other in a physical fight during the season premiere of SAS Australia.

While Candice happily took several swipes at Roxy during the fight, the Sydney publicist said she refused to retaliate because of their longstanding friendship.

‘You know what? Is [Candice] really my friend anymore? No,’ Roxy raged. 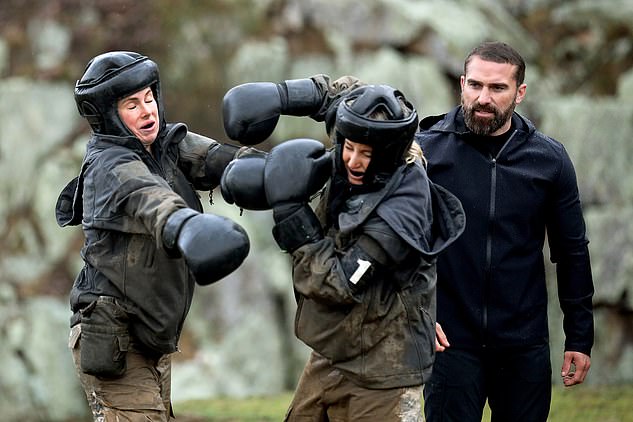 The beginning of the end: On the first episode of SAS Australia, celebrities were paired off to fight each other and encouraged to land hits on their opponents’ faces with no mercy. Pictured: Candice Warner and Roxy Jacenko

‘You know why I never hit back? She’s my mate and I’m not going to smack [her] in the face for other people’s entertainment,’ she added.

Roxy said she reached out to Candice after filming the show in the NSW Snowy Mountains in August and tried to repair their broken friendship.

But instead of accepting the olive branch, Roxy claimed that Candice simply ‘sacked her’ as her manager instead.

SAS Australia returns to Channel Seven on Monday at 7:30pm 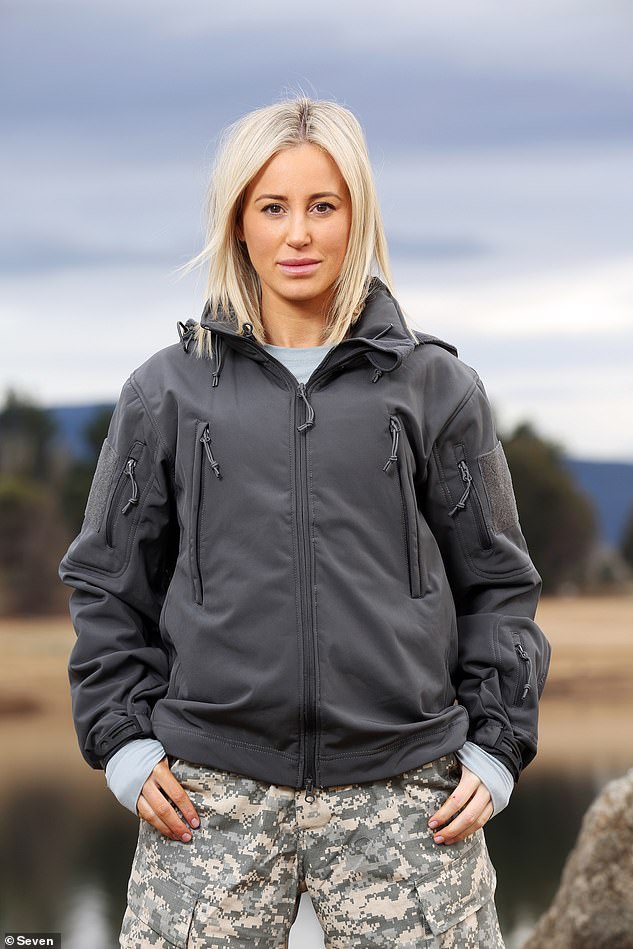 Attempted reconcile: Roxy said she reached out to Candice after filming the show in the NSW Snowy Mountains in August, and tried to repair their broken friendship