They were the brave female pilots who, by helping to deliver 309,000 aircraft, contributed to victory against Nazi Germany.

Despite opposition from the top brass of the Royal Air Force, the Spitfire Women of the Second World War flew Spitfires and other aircraft from factories to other bases in Britain so they could be fitted with weapons and instruments and be made ready for combat.

Now, eight decades on, the pilots – who were part of the Air Transport Auxiliary (ATA) – are among ‘unsung’ female heroes from the war being honoured on a set of stamps that are being issued by the Royal Mail on Thursday.

Among those celebrated on the stamps is Diana Barnato Walker, who is seen climbing aboard a Mk IX Spitfire at RAF Hamble, Hampshire, dressed in her trademark fleece-lined leather jacket.

She is believed to have been the only British woman to fly a Spitfire into occupied Europe during the Second World War.

Also seen is ferry pilot Faith Bennet – who had been an actress before the war and had been married to Hollywood screenwriter Charles Bennett – at the controls of a Lockheed Hudson bomber.

Other images show female codebreakers at the legendary Bletchley Park, air raid wardens standing amid the rubble of destroyed buildings, and nurses at work on the front line.

A stamp showing a mechanic who is believed to be Lance Corporal Adina Henrietta Williams –  a former nurse from British Guyana – repairing vehicles – is also among the collection.

The stamp designs have been approved by the Queen and will prove special to her because the 96-year-old monarch served in the ATS as a mechanic during the latter part of the war.

The ‘Spitfire Women’ of the Second World War are among those being celebrated by the Royal Mail on a new set of stamps. Pictured: Diana Barnato Walker, who is seen climbing aboard a Mk IX Spitfire at RAF Hamble, Hampshire, dressed in her trademark fleece-lined leather jacket 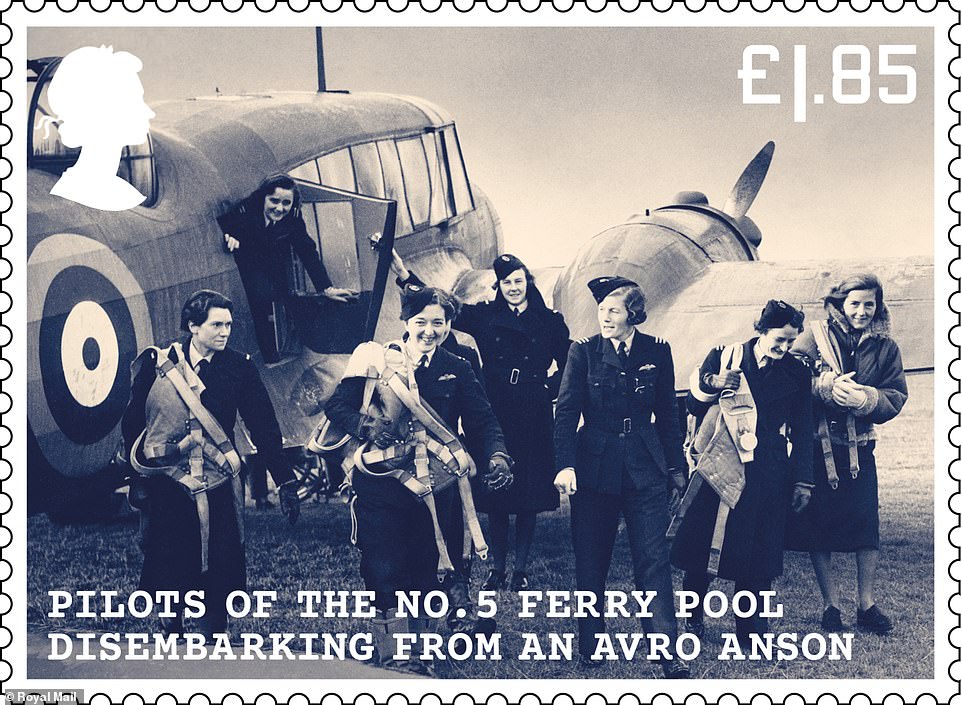 This stamp shows some of the Spitfire Women emerging from an Avro Anson aircraft. In compiling the collection, Royal Mail worked with historians Professor Lucy Noakes, Professor Richard Overy and Richard Poad from the Air Transport Auxiliary Museum 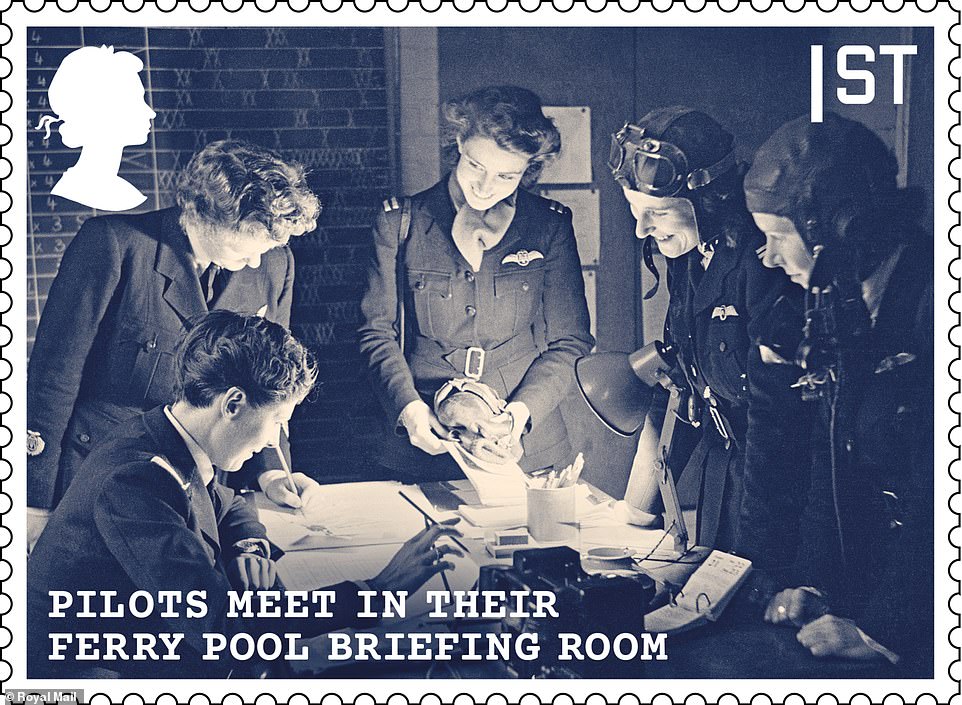 Another stamp in the collection shows female pilots meeting in their briefing room. The woman in the centre of the image has been identified as First Officer Maureen Dunlop – she was in the ATA and was well-known. None of the other women have been identified

The main set of ten stamps that are being released are titled Unsung Heroes: Women of World War II. They highlight the huge range of work women undertook during the war.

The Spitfire Women are shown on a further four stamps, which are presented on a miniature sheet.

A presentation pack containing all the stamps costs £16.

Until 1941, women’s work in the war effort was voluntary but the increased demands of the conflict against Adolf Hitler’s forces prompted Winston Churchill’s government to introduce female conscription.

By the middle of 1943, the majority of British women were in wartime employment, either in industry, agriculture, or the women’s auxiliary services.

The ATS had been set up in 1938, whilst the Women’s Auxiliary Air Force (WAAF) and Women’s Royal Naval Service was established a year later.

Historian Giles Whittell, the author of a book about the Spitfire Women, told the BBC’s Today Programme this morning that the role of the female pilots was ‘crucial’.

‘Typical flights involved ferrying planes without instruments or weapons, but from the factories to the plants where they would get kitted out with the instruments,’ he said. Another stamp shows female codebreakers working at the legendary Bletchley Park during the war. The top secret codebreaking facility was based at a country house and was where a team that included Alan Turing cracked the German Enigma machine 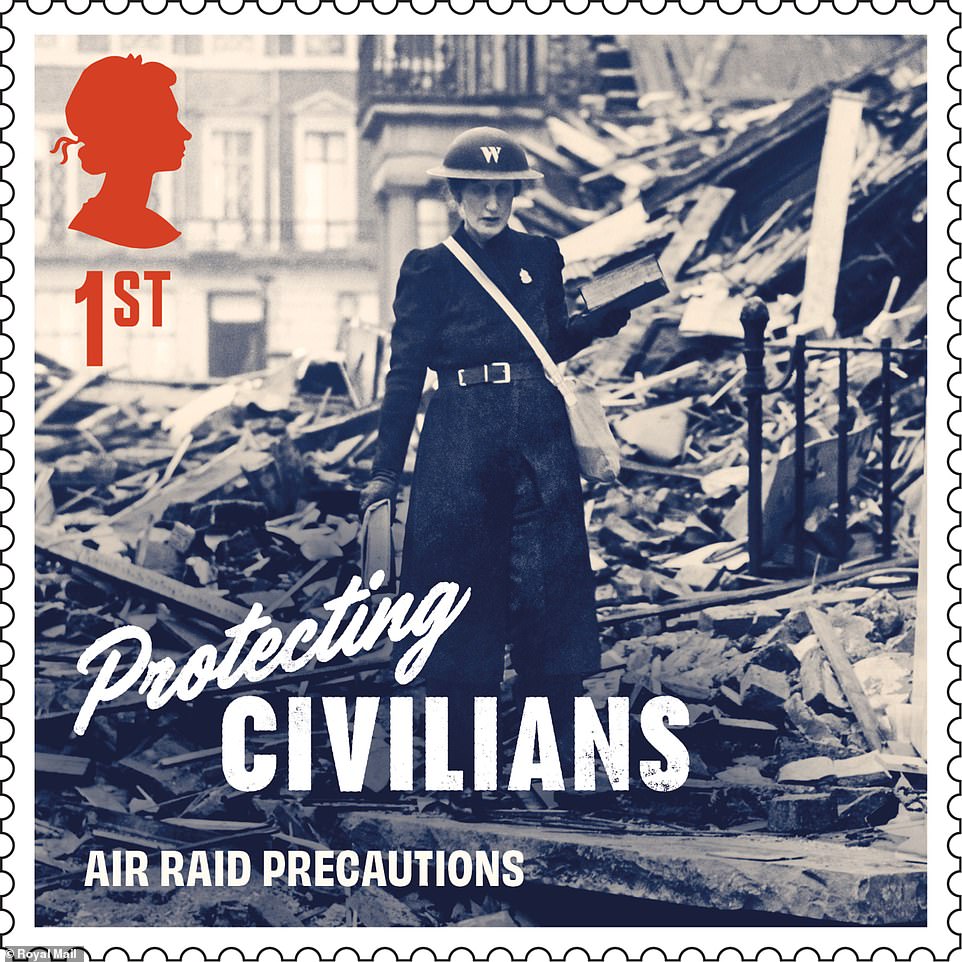 A female air raid warden is shown on another of Royal Mail’s new stamps. The woman is seen walking amidst piles of rubble 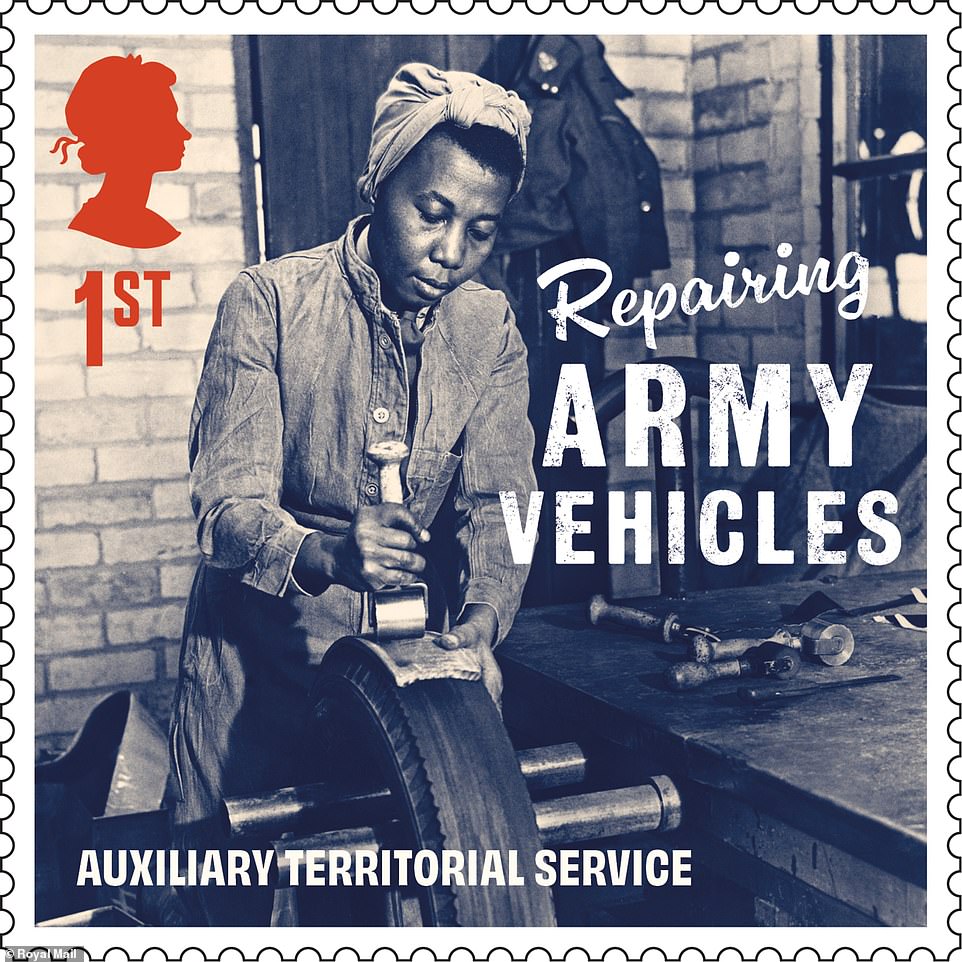 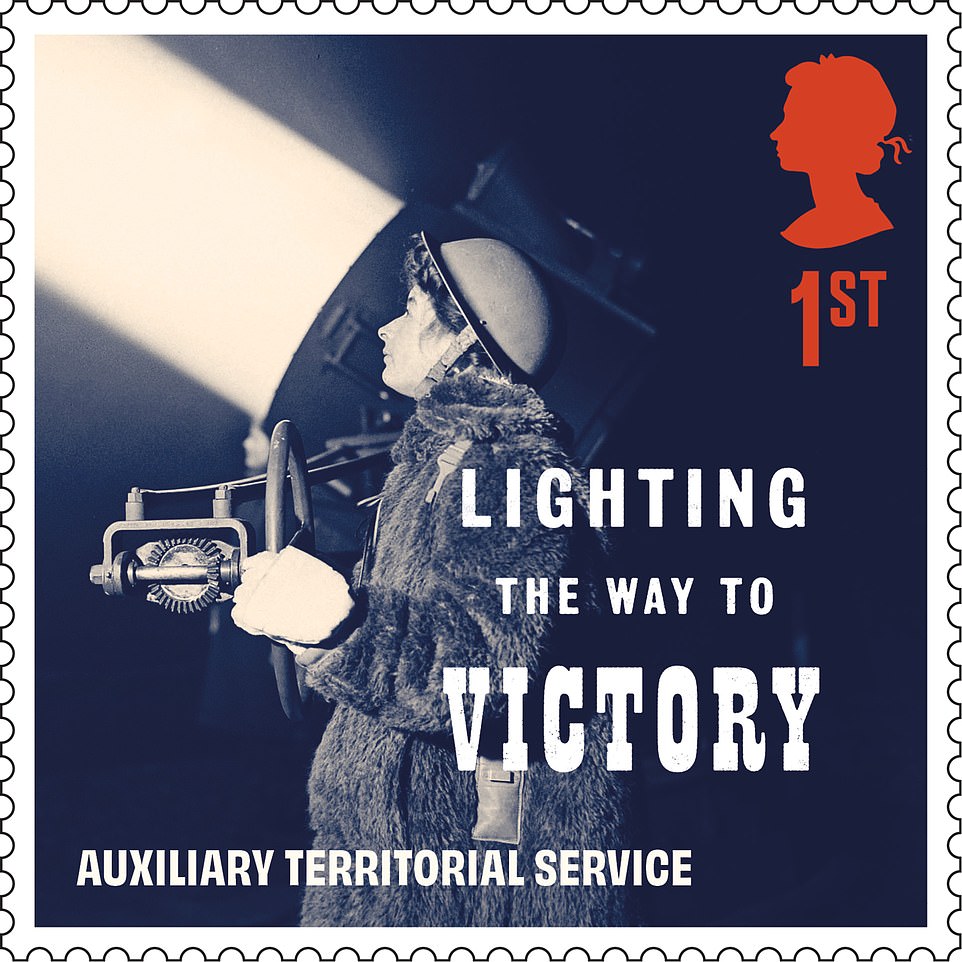 ‘So if the weather was bad they were supposed not to fly but if they did and they flew above the cloud they had broken a cardinal rule but some of them did anyway.’

He added: ‘So some of the resourceful pilots got themselves trained up by chatting up male officers and training personnel but otherwise it was extremely dangerous and by my count about 1 in 10 of them died. Many of them simply by flying into the sea or into hills.’

Mr Whittell said that the female pilots faced sexism from senior members of the RAF, who could ‘not get their heads around’ the fact that women were flying planes.

A ban on women delivering planes across the Channel was imposed due to the opposition to female pilots. It was only lifted near the end of the war.

ATS girl Lance Corporal Williams was one of many volunteers from what were then British colonies and Dominions who contributed to the fight against Nazi Germany.

Former actress Ms Bennett, who was born Margaret Ellen Riddick, was born in 1903 and died in 1969. 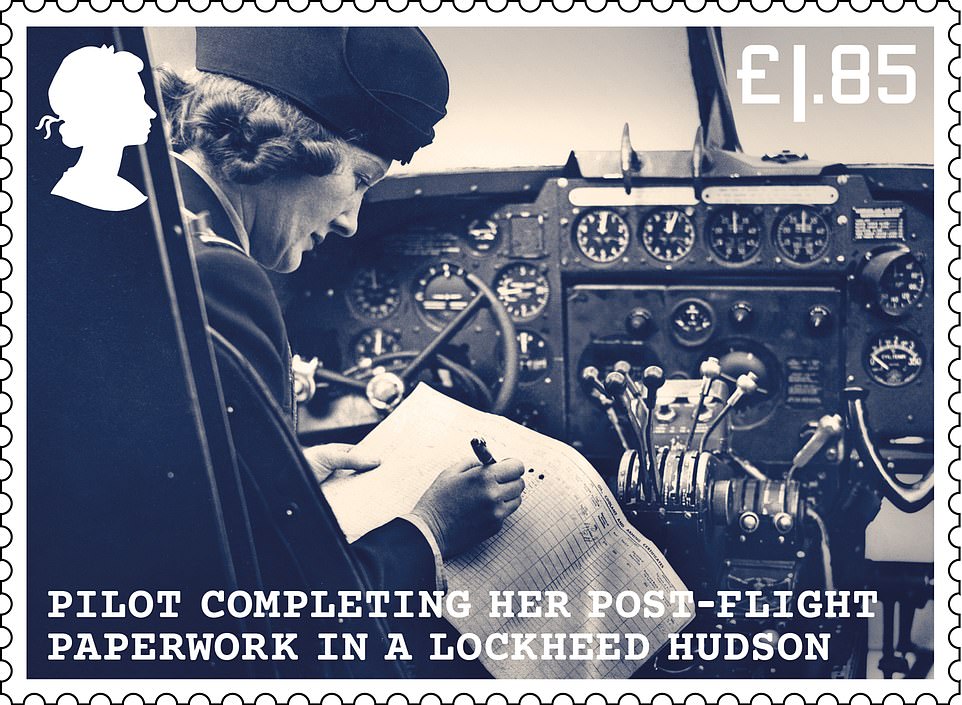 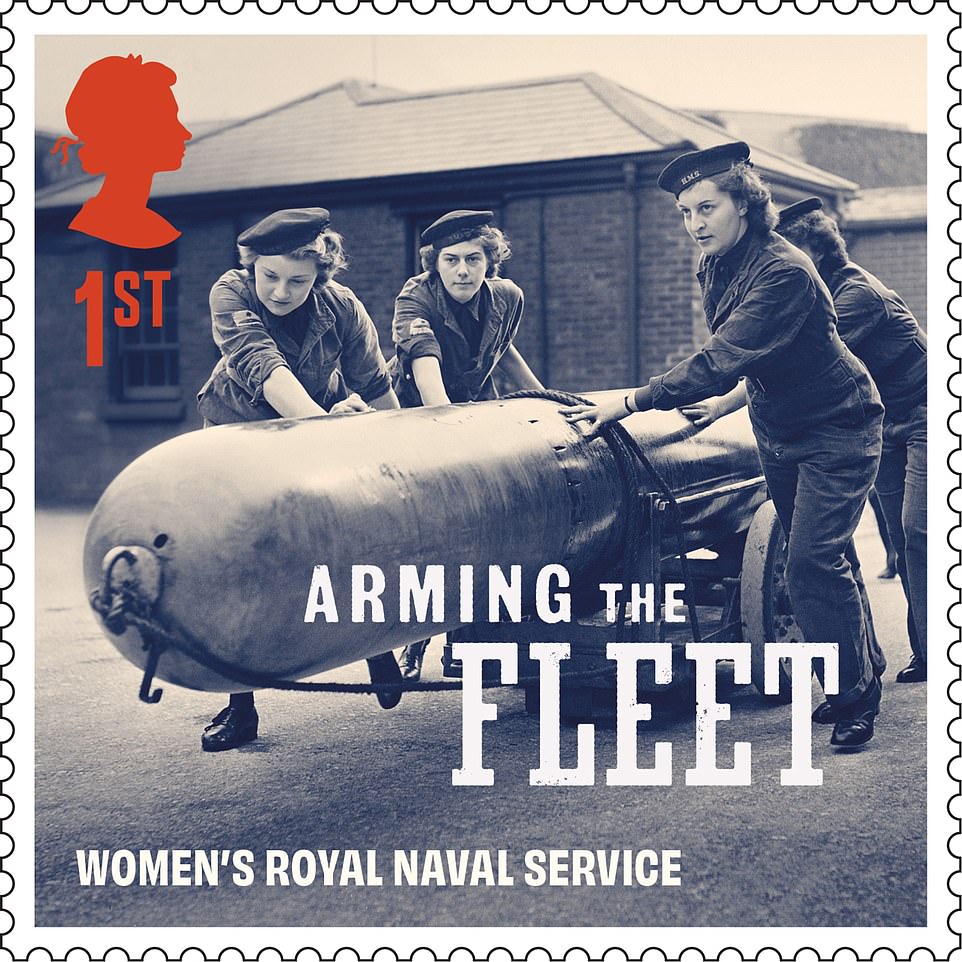 Women from the Women’s Royal Naval Service are seen at work in another of Royal Mail’s new stamps. They will be available for purchase from Thursday 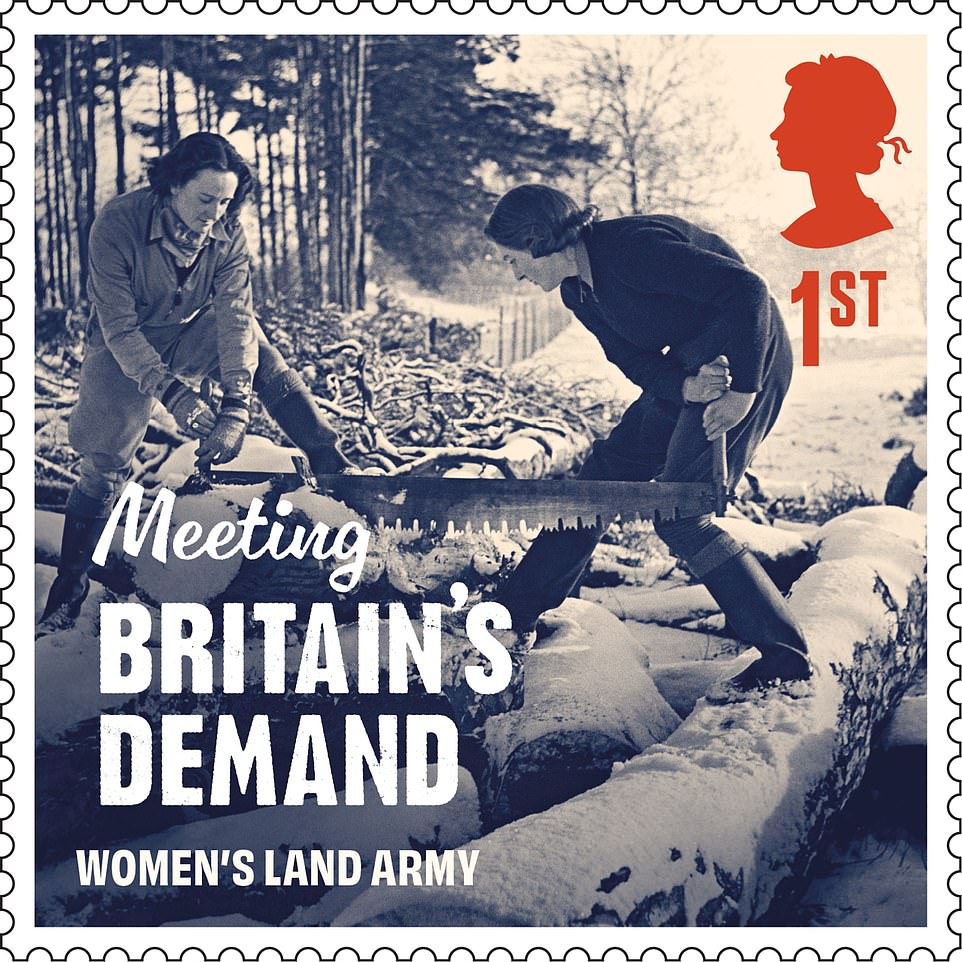 Workers from the Women’s Timber Corps, which was part of the Women’s Land Army, are seen cutting a felled tree into pieces Thousands of women also worked in factories across Britain during the Second World War. Above: One of the new stamps

According to the Internet Movie Database, she is known for productions including Seeing is Believing (1934), Master and Man (1934) and Eyes of Fate (1933).

The star took up flying and passed her ‘A’ license in 1934. Even though she and her husband divorced in 1941, Ms Bennett kept her married name.

She joined the ATA in July 1941 and went on to have two accidents which left her injured.

The first was the result of a mishap in a Hurricane. In a second accident in 1943 she sustained concussion.

Ms Bennett left the ATA in 1945 and married Herbert Henry Newmark in the summer of 1946.

An award for female pilots that was named after Ms Bennett by the British Women’s Pilots’ Association still exists.

Another stamp in the collection shows female pilots meeting in their briefing room. The woman in the centre of the image has been identified as First Officer Maureen Dunlop – she was in the ATA and was well-known.

None of the other women are named and could not be identified. 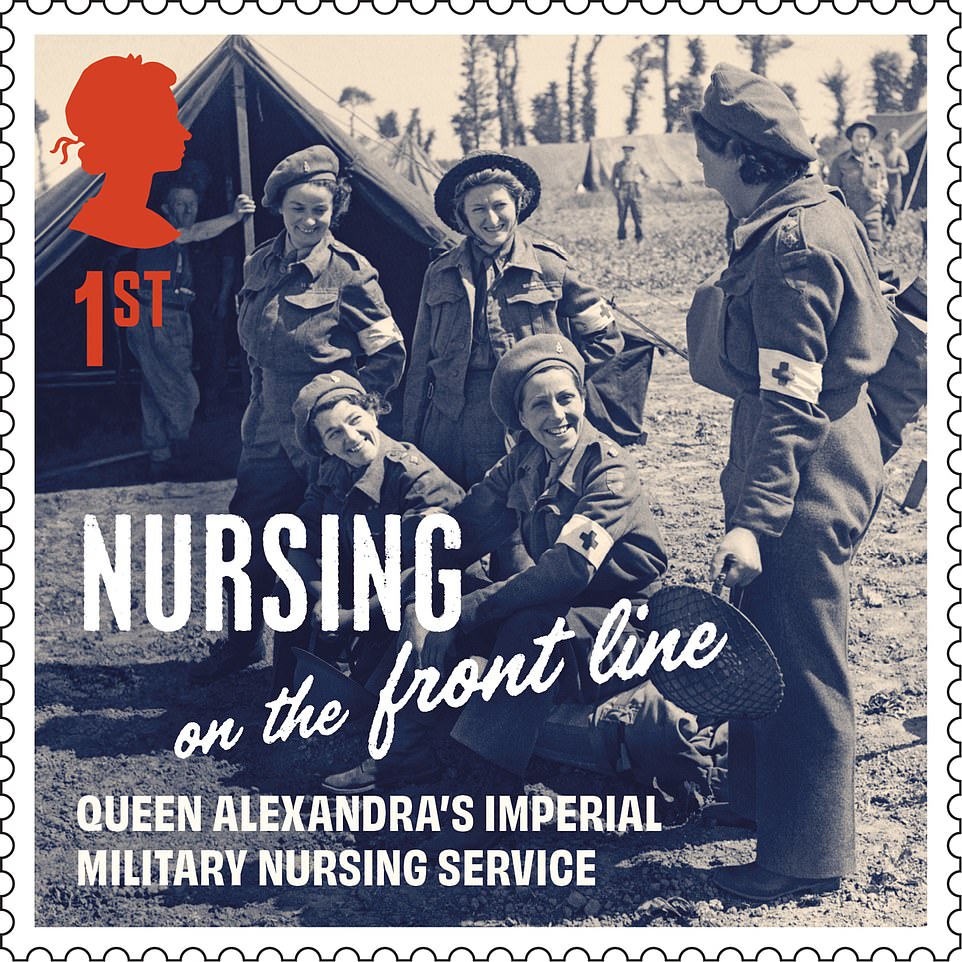 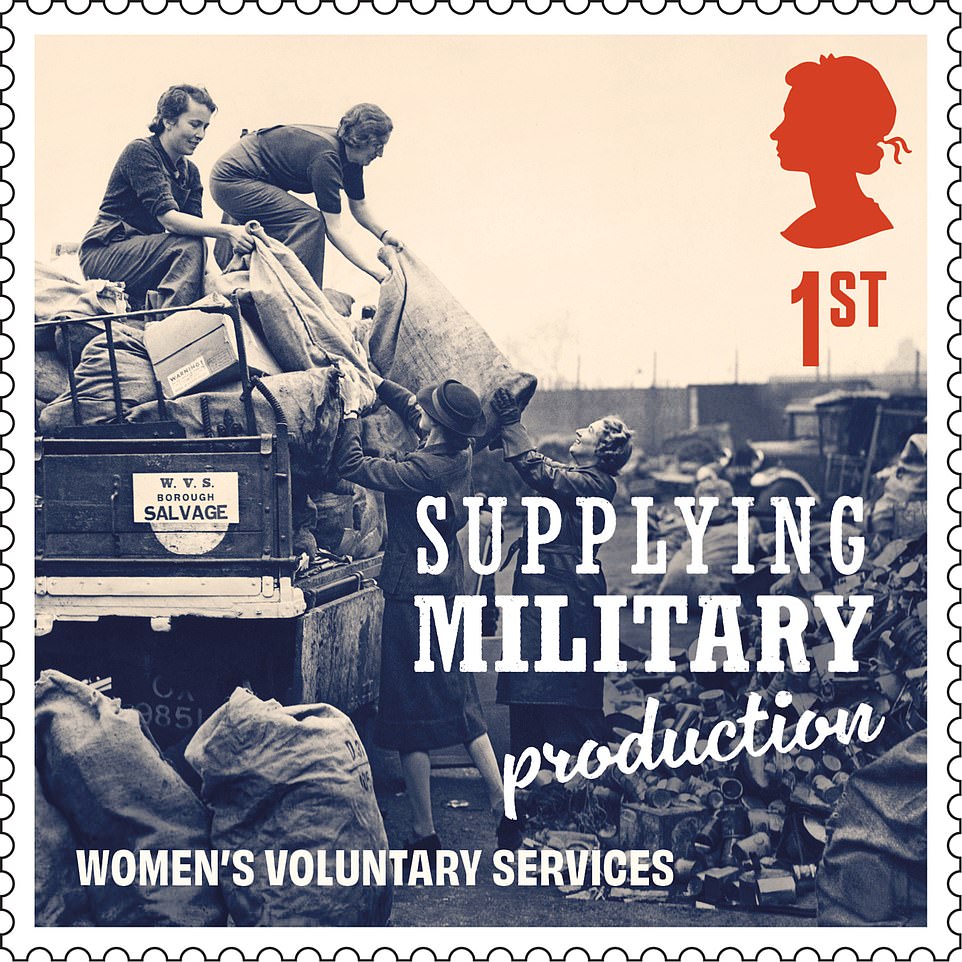 The Women’s Voluntary Services helped to keep troops supplied with equipment during the war, amid intense fighting with Germany 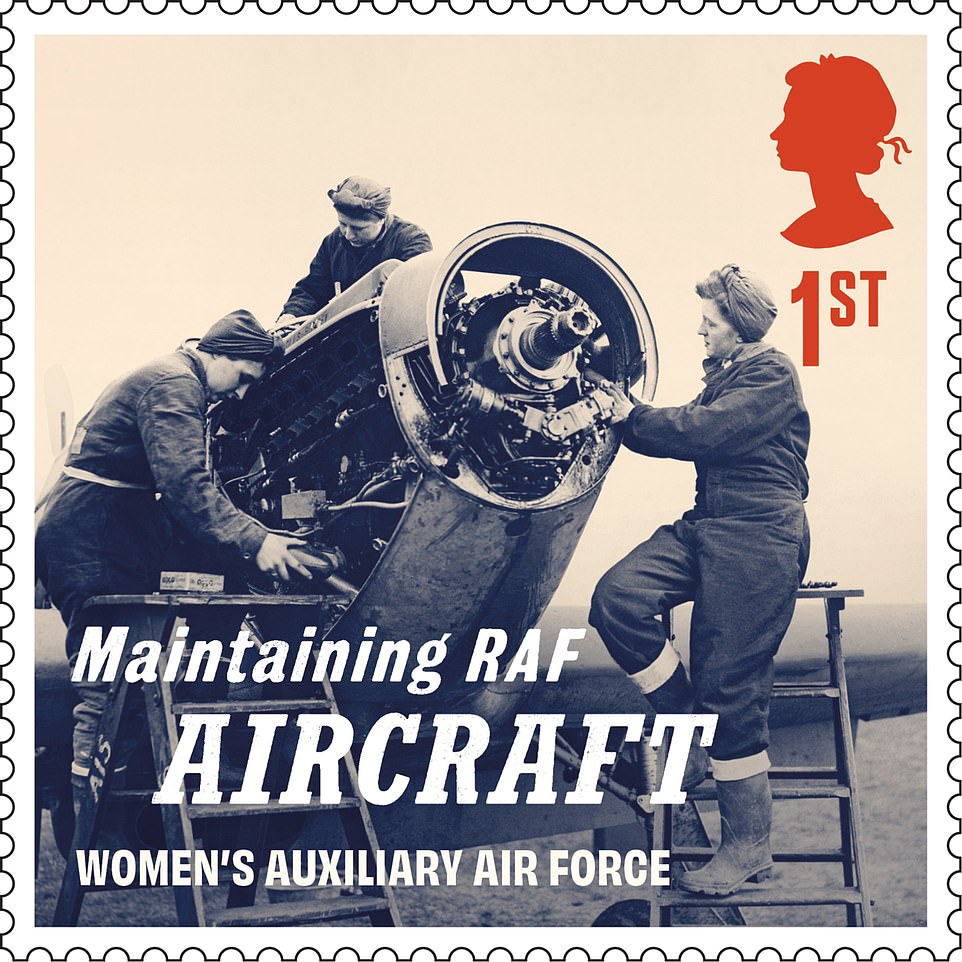 Ms Dunlop grew up in Argentina before coming to England in 1941. There, she volunteered for the ATA and served as a ferry pilot until the end of the war.

The photo showing Ms Walker was taken at RAF Hamble, in Hampshire, in May 1945.

Born 15 Jan 1918, Diana joined ATA in December 1941 with very few flying hours, but became one of ATA’s most accomplished pilots, being based at Hamble.

She was the only British woman on record to fly, at the controls of a Mk IX Spitfire, over the Channel into occupied Europe during the second world war.

Volunteering for service in September 1939, she delivered 260 unarmed Spitfires from factories to RAF airfields between 1942 and 1945.

After the war she was Corps Pilot to the Women’s Junior Air Corps and broke the sound barrier in 1963 – for a time she was the fastest woman in the world. She died in 2008, aged 90.

David Gold, the Royal Mail’s director of external affairs and policy, said: ‘These stamps are a tribute to the millions of women who contributed to the war effort and the Allied victory.

‘Their bravery and sacrifice is often overlooked, but their work helped to drive some of the post-war social changes that eventually saw equal opportunities and equal pay legislation.

‘We must also remember the women who supported the war effort at home, managing households despite the unceasing demands of total war.’