Royal Mail has been accused of insulting veterans after releasing a stamp marking the 75th anniversary of D-Day – with an image of US troops in the Pacific.

The company announced it would bring out a set of 11 commemorative stamps next June to mark 75 years since the Allies invaded Nazi-occupied Europe.

Historians pointed out it was actually a photo of GIs landing in what is now Indonesia on May 17, 1944 – almost a month before D-Day.

The image on the incorrect stamp is archived on the US National WWII museum website and featured in a 1944 issue of the American naval magazine All Hands.

Military historian Andy Saunders wrote on Twitter: ‘What a shambles… Wrong theatre, wrong date, wrong vessel, wrong troops. This gross insult to veterans and those who didn’t make it should be withdrawn.’

Mark Simmer, a military history author, responded to Mr Saunders saying: ‘Shocking! Can’t understand why they don’t temporarily hire an historian for these projects. Plenty around who would gladly assist, I’m sure.’ 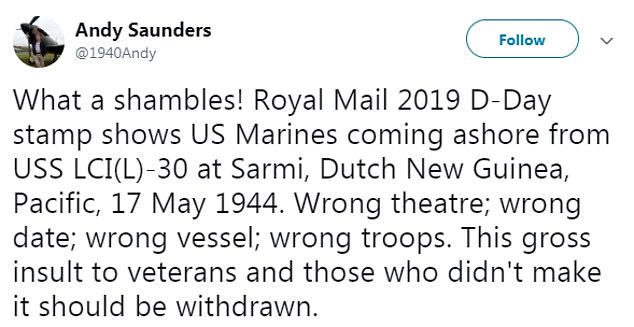 ‘It’s like they have tried to f*** up lol. Hopefully Royal Mail will correct this.’

A spokesman for Royal Mail told the Times: ‘We would like to offer our sincere apologies that our preview release for our 2019 Special Stamp programme included a stamp design that had been incorrectly associated with the D-Day landings.

‘We can confirm that this image will not be part of the final set which will be issued in June 2019.’

The Royal Mail declined to tell MailOnline whether any historians were consulted on the stamp before it was revealed.

According to The Spirit of Normandy Trust this is not the first time an incorrect image has been used in relation to the D-Day landings.

Ian Stewart, vice chairman of the trust, said: ‘The problem with most of these things is that research has got to be thorough and done well ahead of time.

‘It’s very unfortunate, but research is absolutely critical and it’s not the first time it’s been done about D-Day. People think that it doesn’t matter who’s in the photograph.’

The ‘Best of British’ collection will feature 11 stamps to mark the 75th anniversary of the D-Day landings. 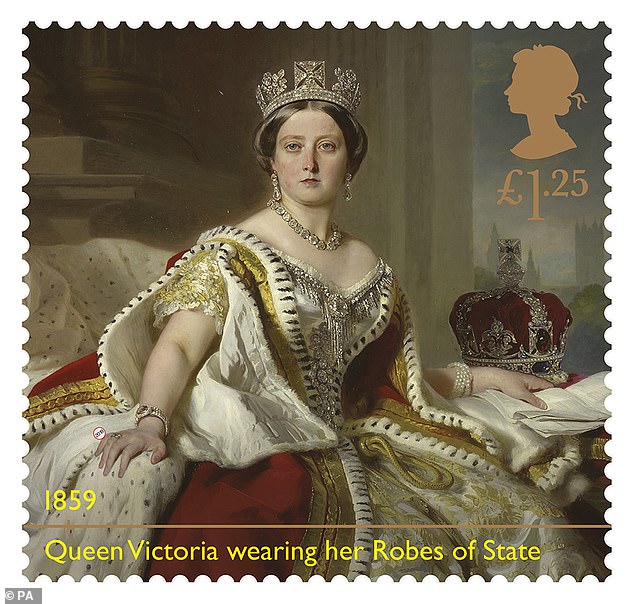 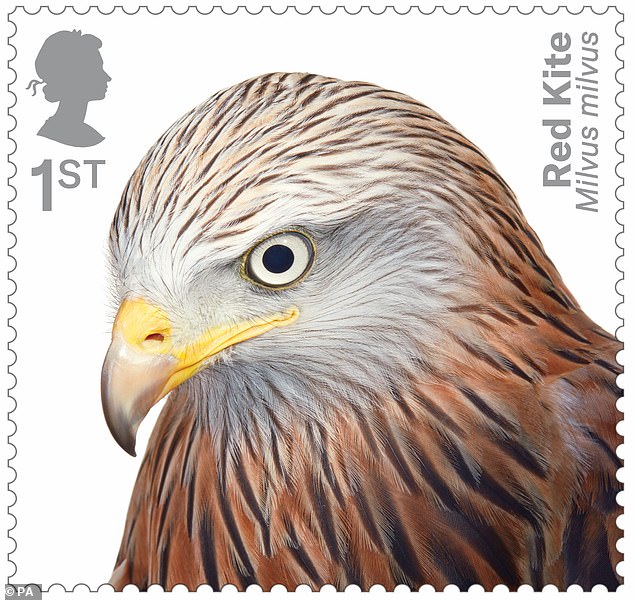 A range of birds of prey have been photographed for Royal Mail, including the red kite (pictured), golden eagle and kestrel, and will be featured on stamps being issued in April

A celebration of the UK’s birds of prey was also among the new stamps issued by the Royal Mail for 2019.

It will also release stamps to mark the bicentenaries of Queen Victoria and Prince Albert and a set to celebrate British engineering.

A range of birds of prey have been photographed for Royal Mail, including the red kite, golden eagle and kestrel, and will be featured on stamps being issued in April.

Forests and Royal Navy ships will mark special stamps being issued later in the year.