A photographer has slammed Royal Mail for delivering his £200 camera lens ‘smashed to smithereens, looking like an elephant had trodden on it’ – and refusing to cough up for the damage.

Jacob Hawkins, 24, decided to upgrade his camera equipment and listed his current lens on eBay for £200 in August to cover the costs.

The mechanical design engineer carefully packaged up the Tamron SP 70-300m lens with bubble wrap and polystyrene before placing it in a cardboard box and posting it to his successful eBay bidder. 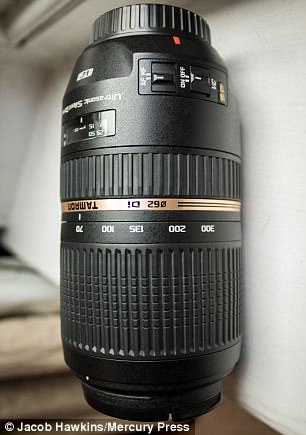 Jacob Hawkins wanted to update his camera equipment, so put his lens, worth £300 brand new, on eBay for £200. He was furious when he found it had been delivered smashed to pieces 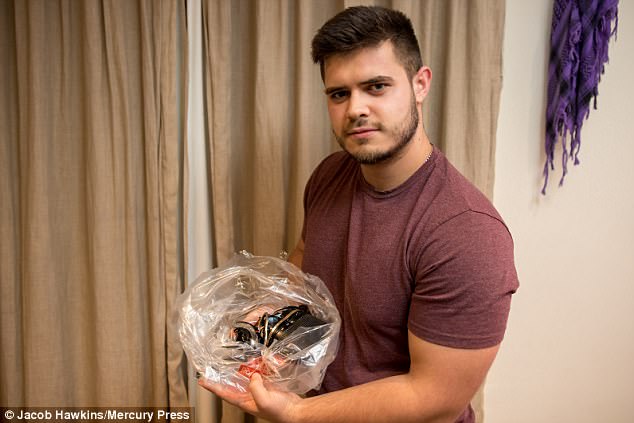 Mr Hawkins (pictured), 24, of Sheffield could not believe the equipment had been so badly taken care of and was forced to fork out £200 to reimburse his London-based buyer

But he was stunned when he received photos from the London-based buyer a week later showing the camera lens completely demolished after being roughly handled, so lodged a complaint with Royal Mail that day.

He had to fork out £200 of his money to reimburse the buyer for the damage and claims he then had to wait a month for Royal Mail to acknowledge his complaint.

Mr Hawkins, of Sheffield, Yorkshire, said: ‘It’s diabolical. I’m just so shocked, the thing looks like an elephant has trodden on it.

‘My best guess is that one of their cars ran it over because if you look at the package you can see the rock indentations down one side where it’s been on the floor.

‘It must have been on the floor because rocks have pressed into it. The whole thing is just smashed to smithereens. 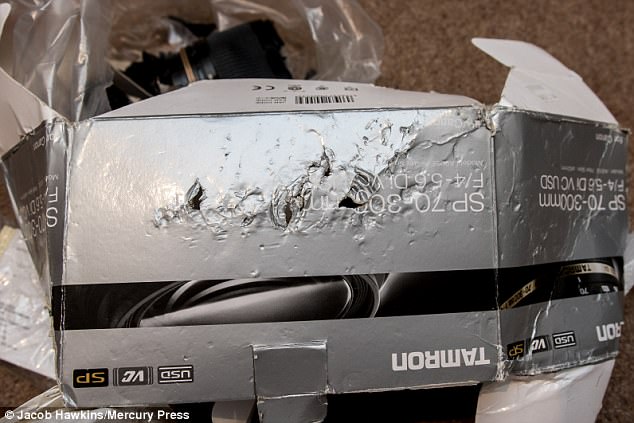 Since being approached by the media, Royal Mail has offered to reimburse him for the damage (pictured), but the photographer claims they had failed to respond to him until then 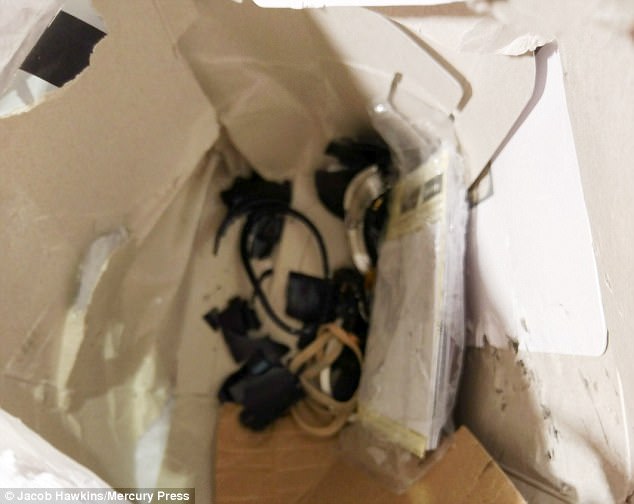 When the lens arrived with its London eBay buyer, it was ‘smashed to smithereens’ and ‘looked like an elephant had trodden on it’

‘I’ve tried to put it back to how it was before but it can’t be done with a human hand. It must have been a vehicle that drove over it or something.’

The 24-year-old claims Royal Mail originally refused to refund him for the obliterated piece of kit – worth £300 brand new.

But after being approached by press yesterday, they quickly apologised that Mr Hawkins hadn’t received Royal Mail’s usual ‘high quality’ service and have offered to reimburse him the total costs as a gesture of goodwill.

Mr Hawkins added that whoever delivered it would have known the scale of the damage as it would have ‘rattled’ within the package.

He said: ‘They must have already known that it was smashed when they handed it over to the buyer because it was bagged up and you would have been able to hear things moving around in there.

‘When I complained the same day and told them what had happened, they ended up getting back to me a month later asking for the ‘evidence’.

‘When it arrived the smashed lens came along with a letter saying they weren’t going to pay compensation because the item was ‘not packaged correctly’..

Mr Hawkins insists he made sure he carefully wrapped the fragile parcel to ensure it would survive the journey.

He said: ‘I’m absolutely furious. I put the thing in a cardboard box with polystyrene either side of the lens and the whole thing was bubble wrapped.

‘It was packaged to withstand shock so the only way it could have been crushed like that is by a vehicle running it over. 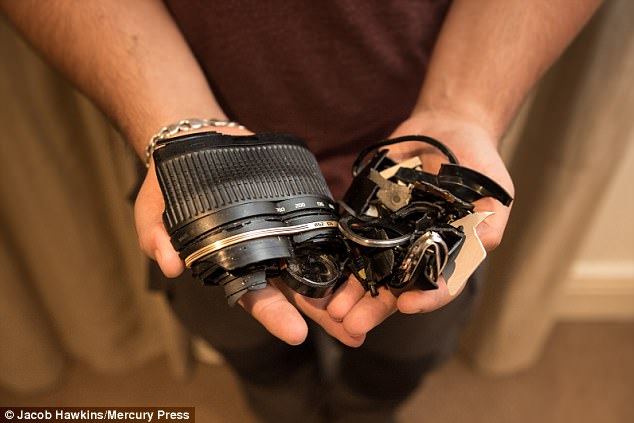 Mr Hawkins slammed Royal Mail for what happened to his package (pictured), saying: ‘It’s diabolical. I’m just so shocked, the thing looks like an elephant has trodden on it.’ 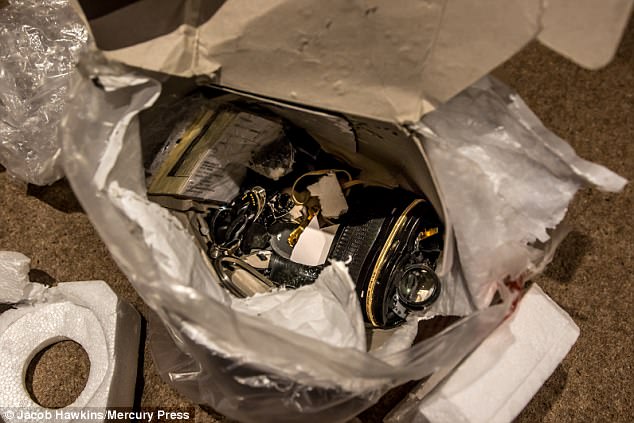 ‘I put my complaint through to the ‘escalated’ complaints department but they just said the same as the first complaint department.

‘I’ve now put a complaint into the ‘postal review’ department and I’ve yet to get a response. This is two months down the line and I’m still £200 out of pocket.

‘What gets me is that Royal Mail are supposed to be the ‘standard’ for couriering. But I’ve had better customer service from companies like DPD – it’s just diabolical.

‘I want people to be aware that this is the standard they’re offering and perhaps think twice before using Royal Mail at Christmas.’

Royal Mail spokesperson Sally Hopkins said: ‘We apologise to Mr Hawkins that he has not received the high quality service from Royal Mail on this occasion.

‘We are speaking to Mr Hawkins to offer to reimburse him for the cost of the item and the postage as a gesture of goodwill.’ 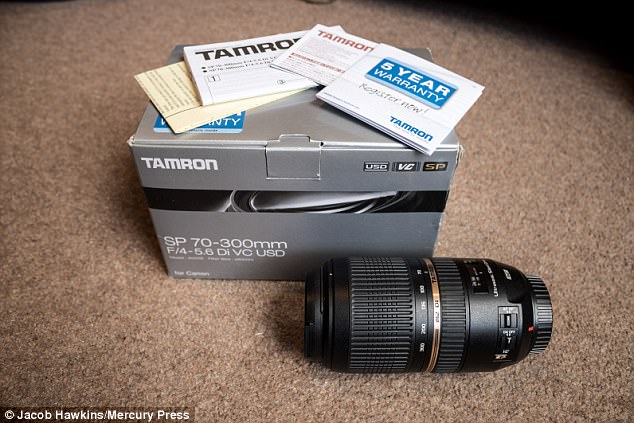 The Tamron SP 70-300m lens (pictured) was posted to Mr Hawkins’ buyer in August, but he claims he did not get a response until this week 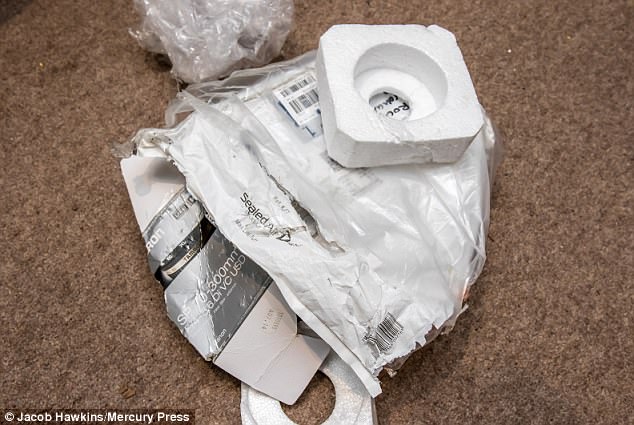