The Royal Mint has produced a new rainbow-coloured 50p coin which it says celebrates Pride, but the person who designed it says they have ‘mixed feelings’ about corporate ‘pinkwashing’.

The celebratory multi-coloured coin has been released this month to ‘celebrate unity, equality and 50 years of UK pride’, the organisation said.

The piece features a portrait of the Queen’s head on one side of the coin, with the flip side showing five rainbows, the words ‘Protest’, ‘Unity’, ‘Visibility’, ‘Equality’ and ‘Pride’ and the colours black, brown, light blue, pink and white to represent Trans, Black and People of Colour.

It’s release coincides with Pride month, which is meant to give a voice marginalised Lesbian, Gay, Bisexual, Transgender and Queer (LGBTQ) people.

However, it’s designer Dominique Holmes says they had concerns about the coin being used as an example of corporate ‘pinkwashing’ – where organisations promote LGBTQ rights to distract from negative aspects of their business.

The coin has the words ‘Protest’, ‘Unity’, ‘Visibility’, ‘Equality’ and ‘Pride’ written on the back, along with five rainbows 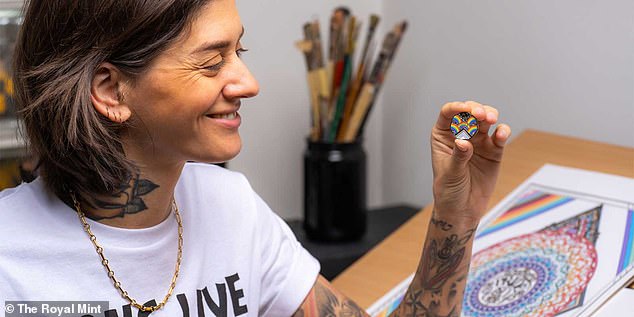 Dominique said: ‘I had slightly mixed feelings about the idea of a coin celebrating 50 years of Pride.

‘Whilst I loved that The Royal Mint recognised this significant anniversary in LGBTQ culture, and that the coin itself could be a powerful way to spread the word, like many queer people I have become jaded by the amount of corporate “pinkwashing” that has derailed the important social and political messages behind Pride.

‘But once I knew that The Royal Mint was working with the queer community to ensure authenticity and allyship, not to mention inviting queer artists to create the designs, I felt incredibly proud and excited that there would be a Pride coin out there.’

The coin is coin is uncirculated, meaning it is not intended to be used in shops and day to day life, although it still can be as it is classed as legal tender.

Anyone who wants one will have to buy it from the Royal Mint or other vendors, with the cheapest version – an uncoloured Pride coin – setting you back £10.

Those who want the full, multi-coloured version will have to cough up £18.

Despite having reservations about the project, Dominique enjoyed it and felt they had created something ‘iconic’.

‘The finished design encompasses everything I hoped it would from my initial concepts; I think it expresses the passion and protest of Pride within a celebratory aesthetic,’ they said. 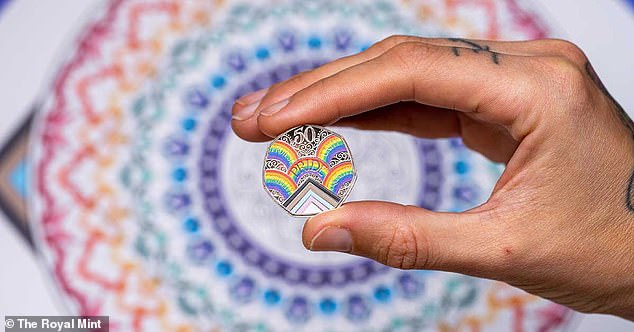 The Royal Mint has released the uncirculated coin to coincide with Pride month, which will culminate with Pride in London on July 2

‘I really hope it connects with people and reminds them what the movement is all about.’

Dominique added that they wanted the design to highlight the ‘ethos and drive’ behind the Pride movement.

‘Pride is so often dismissed as just a parade and a celebration when in fact it has always been much more than that,’ they said.

‘Pride is protest and it was important to me to include that message in my design.’

The Royal Mint says it will be making a contribution of £40,000 to London LGBT Community Pride CIC, the company that runs the annual Pride in London event.

This years festival, which will include a parade through the centre of the capital, is set to take place on Saturday, July 2.

In a statement on its website, the Royal Mint said: ‘With a legacy that dates back to 1972, Pride UK has established itself as the premier event in the LGBTQ+ calendar. 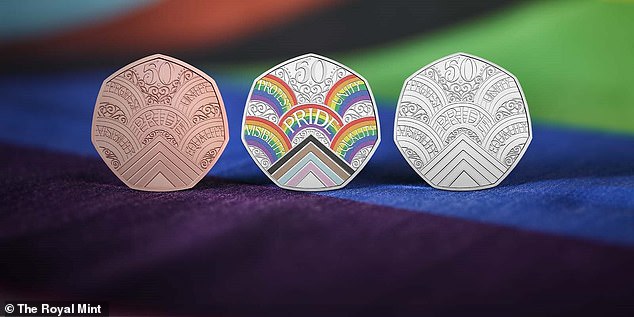 ‘Synonymous with visibility, unity and equality, its annual parades are colourful celebrations of the LGBTQ+ community and are hugely popular nationwide.

‘As the very first Pride event held in the United Kingdom, Pride in London has a rich history that spans multiple decades and generations.

‘Due to its location, it is also the biggest and one of the most diverse Pride events in the UK, attracting around 1.5 million attendees.

‘Today, there are more than 150 Pride events across the UK.

‘Promoting solidarity, togetherness and inclusivity within a colourful, carnival-like atmosphere, these events have played a huge role in ushering in social equality and promoting acceptance for the LGBTQ+ community.

‘In honour of this truly revolutionary movement that helped change the course of history, we are proud to celebrate the 50th anniversary of the first Pride UK event with a UK 50p coin, marking the first time Britain’s LGBTQ+ community has been celebrated on a UK coin.’