An air of secrecy fills the red-brick townhouse, located around the corner from St Paul’s Cathedral in London.

Upon entering, I am whisked into a wood-panelled room where five Royal Mint employees wearing white gloves stand facing a dark display cabinet.

Inside sits a polished silver coin about the size of a satsuma. Printed on it is the unmistakable profile of our new King.

Limited: The most expensive item in the Royal Mint ‘s Her Majesty Queen Elizabeth II Memorial Coin Collection is a £82,950 gold coin in the ‘ounce’ range weighing 1kg (pictured)

It is a Thursday afternoon and I am among the first in the country to witness the unveiling of a new commemorative £5 Crown coin to mark the life and death of the late Queen.

Our small group is gathered at the Worshipful Company of Cutlers, a historic knife-making guild which dates back to the 13th century.

Unused to seeing anything but Queen Elizabeth’s portrait on our coins, it takes my eyes a second to adjust as I inspect this new image: King Charles, modestly dressed without a crown, facing the opposite direction to his mother — as is tradition. But she is not far away.

On the reverse are two portraits of our late monarch; one of her in her youth and one in her later years. Above them is the inscription, ‘Elizabeth Regina’.

It is the first time two monarchs have been pictured on one coin in the Royal Mint’s 1,100-year history. The likeness was crafted by sculptor Martin Jennings, best-known for his statues of writers Sir John Betjeman and George Orwell.

Since the Queen’s death last month, many people have been desperate to scoop up as many keepsakes and collectibles as they can to celebrate her long legacy.

The new £5 Crown is one of three designs launched on Monday by the Royal Mint as part of its Her Majesty Queen Elizabeth II Memorial Coin Collection.

The range also includes a 50p design featuring the King. On the flipside is an image of the quarters of the Royal Arms — and the emblem of each home nation.

The third design is a special ‘ounce’ coin, displaying a profile image of Queen Elizabeth II on one side and the effigy of the King on the other.

All three are available in a range of precious metals — with the cost varying depending on the material.

F or example, a £5 Crown can be bought in a ‘brilliant uncirculated standard’ for £14.50. This means the metal struck is of a higher quality than coins in general circulation.

A limited-edition 5 oz coin in gold was also selling for £13,395. But only 250 were made and by yesterday morning, all were sold.

The most expensive item in the collection is a £82,950 gold coin weighing 1kg. Only 30 are available. 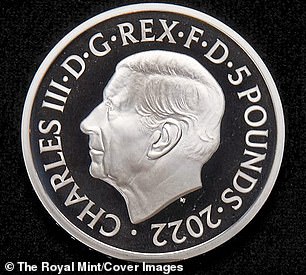 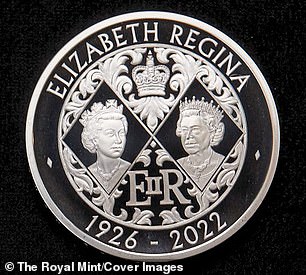 The £5 Crown and 50p coins will be made according to customer demand to reduce waste, and are available until December 31. But most of the ‘ounce’ designs are limited edition.

All are available to buy individually, and come with a presentation case and certificate of authenticity.

Unsurprisingly, the Royal Mint website crashed the moment the new collection launched, and by 10.30am there were almost 60,000 people in an online queue.

Customers took to Twitter to vent their frustration as they battled to log on. One user said that after an hour in the queue he was forced to give up as there were still 35,000 people ahead of him.

Another suggested it was like an online sequel to the queue to attend the Queen’s lying-in-state, when thousands lined the streets of London to pay their respects.

Infuriatingly, customers who looked away from their screens while they waited also found they lost their space, as queue numbers were only valid for ten minutes.

But the waiting time had fallen by yesterday morning.

A spokesman for the Royal Mint says: ‘We thank customers for their patience during this incredibly busy time.’ If you are not online, purchases can be made by calling 0800 0322 152. 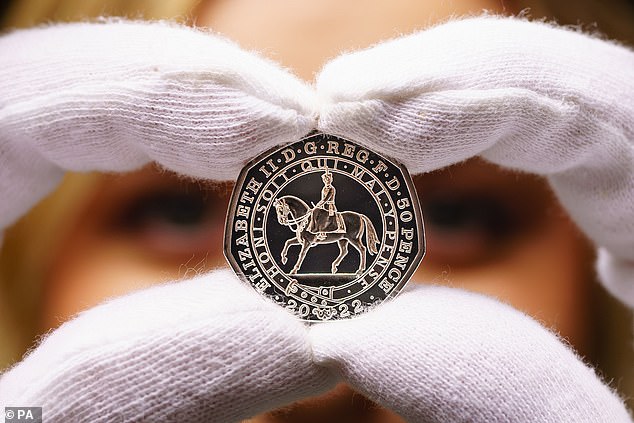 Jon White, a coin expert at the Britannia Coin Company, says: ‘The long-term value of a coin boils down to how many are produced and what the demand is now.

‘New coins for a new monarch are always popular, as are the last coins of the previous monarch. We expect these commemorative coins to be phenomenally in-demand.’

A £1,800 three-coin sovereign collection commemorating the Queen’s Jubilee in June is no longer available on the Royal Mint’s website. And a UK £5 silver proof coin marking the same event, which was retailing for £92.50, has also sold out.

For the Jubilee, the Royal Mint produced a limited-edition run of 50p coins in platinum, which is unusual as the metal is very difficult to strike.

‘The Platinum 50p has been phenomenally successful, and they are now selling for £3,500 each,’ says Mr White. They were originally priced at £1,395.

The commemorative coin set cannot be used as legal tender.

However, new 50p coins, featuring the same design as in the collection, will enter circulation from December. It means they may be in the nation’s pockets by Christmas.

The coins will be distributed via 20 ‘cash centres’ across the country, which supply currency to banks and post offices based on demand.

There are about 27 billion coins currently in circulation bearing the image of the late monarch, and these will co-circulate with the new coins.

From January 1 next year, all new coins, irrespective of whether they are in circulation or commemorative, will bear the image of the King.

Chris Barker, information and research manager at the Royal Mint, says: ‘The Queen has been the only figure to grace our coins since decimalisation, and it’s not inconceivable that in thousands of years’ time, some of these coins will still be out there and recognisable.’