Around 145million ‘old-style’ £1 coins, pictured, have still not been returned to the Royal Mint. They became unusable in 2017

Around 145million ‘old-style’ £1 coins have still not been returned to the Royal Mint.

People are being urged to root behind the sofa to find these coins – which have not been useable since October 2017, but can still be deposited at most high street banks.

Around 24million of them have been returned in the last year.

A Royal Mint spokesman said: ‘We expect there to be some returns for a number of years to come as people find these coins.’

The old-style round coin was replaced by a 12-sided version to crack down on counterfeiting – the Mint estimated over 3 per cent of the old versions were fake.

There were about 1.7billion round £1 coins in circulation at the start of the transition period in March 2017. 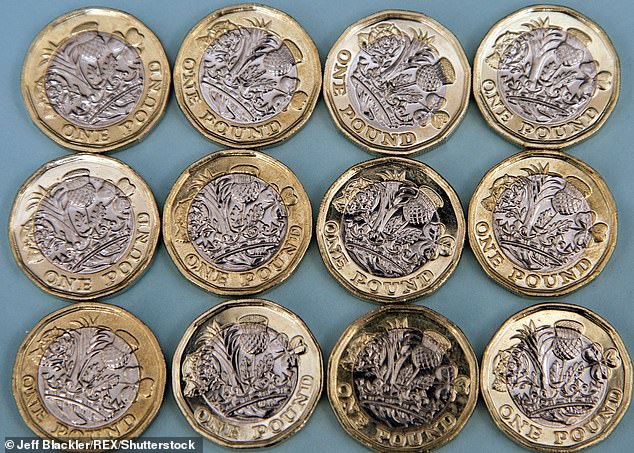 A 12-sided £1 coin, a dozen pictured, replaced the old round coin and it is said to be the most ‘secure in the world’ with anti-counterfeiting details

The new coin is described as the most ‘secure in the world’ with anti-counterfeiting details, including a hologram and micro-sized lettering inside both rims.

Millions of the round £1 coins have been melted down to help create some of the new ones at the Royal Mint, based in Llantrisant near Cardiff.

Earlier this year, the Treasury confirmed that it would keep all the current denominations of coins – including 1p and 2p coins.

An independent review of cash suggested that banknotes and coins were a necessity for eight million people.