A Royal Navy Commander who slapped a female colleague’s bottom was cleared of sexual assault by a court martial panel after he claimed ‘it was just drunken buffoonery’.

The 48-year-old, who received an MBE from Prince Charles, told the hearing he was very drunk when he slapped her backside, insisting it was a ‘prank’ and he was ‘showboating’.

The woman told the court martial his right hand struck her right buttock so hard it left her sore and she fled the dance floor, only for him to repeat the action 20 minutes later.

Representing Cdr Heap, Lieutenant Commander Verity Fane-Bailey today admitted it was an ‘unpalatable’ incident that was ‘unbecoming’ of an officer of his rank.

However, she begged the panel not to ruin Cdr Heap’s career by treating it as a criminal or sexual offence.

The panel of five senior officers today cleared the Commander of two counts of sexual assault after just 57 minutes of deliberations.

The judge had earlier instructed them that if they thought a reasonable man would view the slapping as sexual they could convict Cdr Heap. 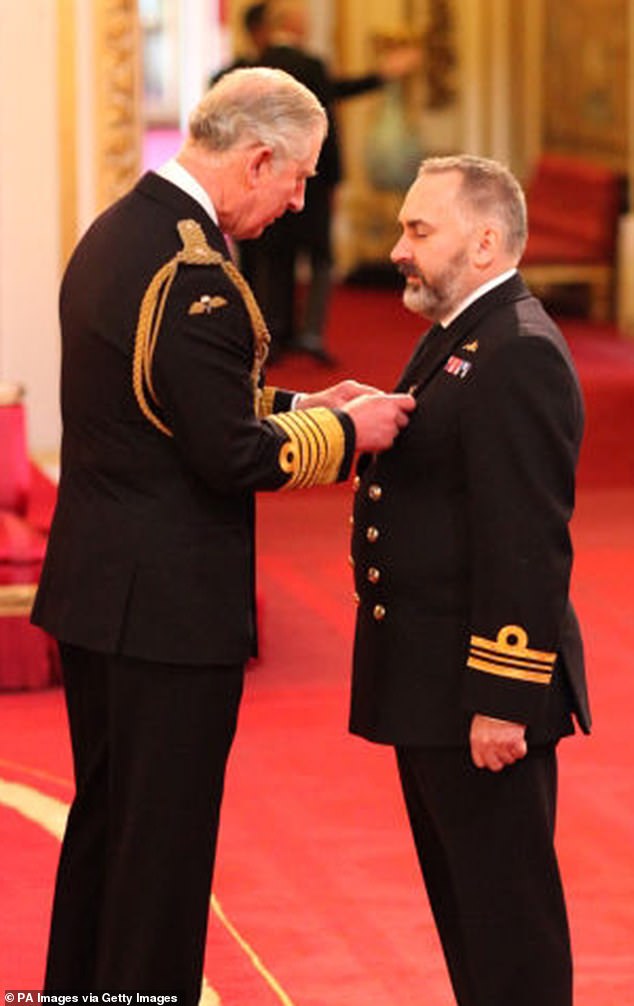 Commander Heap, who joined the Royal Navy as a submariner 30 years ago, received an MBE from Prince Charles at Buckingham Palace in 2013

‘You may think a man slapping a woman’s bottom is sexual.’

Prosecutors had alleged the Commander, who joined the Navy as a submariner 30 years ago, had been ‘sexually motivated’ when he slapped the woman’s backside at the Navy base Christmas party.

However, Cdr Heap, who was based at HMS Excellent in Portsmouth, Hampshire at the time, told the court he had been drunk and thought he was being ‘amusing’.

He said: ‘Yes, I did touch her. I moved towards her and I made a gesture, pointing to distract her and then slapped her on the bum.

‘I thought it would be amusing, it was childish showboating, a ridiculous moment.

‘The second time was almost exactly the same, but without the distraction.

‘I don’t believe it was sexual assault. It was just drunken buffoonery by me.’

When asked by prosecutor Wg Cdr Saunders what he found amusing in slapping a woman’s bottom, Cdr Heap, replied: ‘Today, absolutely nothing. At the time, I thought it would be amusing.

‘I was not trying it on with her, if I was I would not have gone about it in that manner. 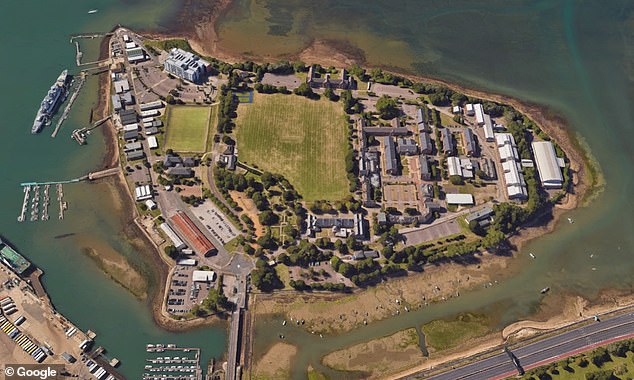 Commander Heap was based on Whale Island in Portsmouth Harbour, Hampshire

‘It was like a childhood prank where you say “oh, what’s that on your jumper” and then slapping the person on the chin when they look down.

‘It was a joke, that was my thought process at the time.’

Representing Cdr Heap, Lieutenant Commander Verity Fane-Bailey had said: ‘If there was an offence for being supremely foolish, then I expect Commander Heap would admit it straight away.

‘His actions throughout the entire evening were juvenile and he was in drink. In essence, we are in the realms of a childish, schoolboy mentality; a prank.

‘It is an adult version of when schoolboys tap their friends on the shoulder to get them to look around the wrong way.

‘Was he foolish? Absolutely. Was it childish? Yes.

‘You might think what Commander Heap did that evening was utterly unpalatable. You may think it’s unbecoming of a senior officer in the Navy.

‘At the time, he thought it was funny. As a result, you may not like him very much. But let’s make this a service issue, not a criminal one.’

After the panel returned its verdict, the judge told Bulford Military Court, Wiltshire, that Cdr Heap, of Poole, Dorset, had been willing to admit a charge of ‘disgraceful conduct’ prior to the two day trial.

Judge Hill said: ‘That concludes this case for you Commander Heap, you are free to leave the court now.