Royal Navy involved in standoff with trawler at Gibraltar

Royal Navy ships have been involved in a stand-off with a Spanish police boat and a trawler fishing illegally in British waters off the coast of Gibraltar.

The trawler had entered UK waters for the third day in a row, and when its crew refused to leave, this reportedly led to a confrontation which saw the Spanish Guardia Civil boat become involved.

After nearly an hour-long stand-off, which local marine traffic enthusiasts describe as ‘unusual’, the Guardia Civil vessel chased out of Gibraltar waters.

Stand-off: Royal Navy vessels in blue, can be seen chasing after a red Spanish trawler in the strait of Gibraltar on Wednesday

This is reportedly the third day in a row the same trawler – Virgin Carmen 1 – has entered British Gibraltar territory to fish illegally in as many days.

Michael J Sanchez, founder of Gibraltar Coast Watchers, noted that the trawler was there both on Monday and yesterday morning, before reappearing on a marine traffic tracker service again Wednesday.

Mr Sanchez noted that the confrontation ended with the HMS Scimitar ‘chasing out’ the Spanish police boat.

A Royal Navy press spokesperson confirmed that the incident took place, but said: ‘this is nothing unusual, these things happen often. It is another territorial display, similar to what we have seen in Gibraltar over the past years.’

However, Gibraltar Coast Watchers’ Mr Sanchez disputes this, saying: ‘The Ministry of Defence always try to water things down so as not to upset Spain.

‘There hasn’t been a standoff like today for quite a long time.’

Disputes between Gibraltar and Spain over the waters are frequent but are particularly poignant following UK’s Brexit vote last year and the triggering of Article 50 in March. 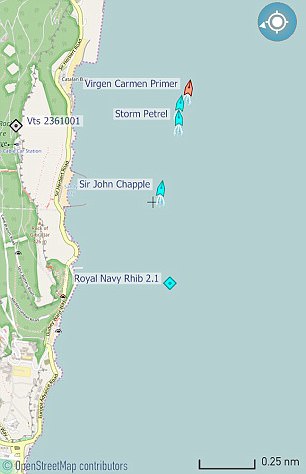 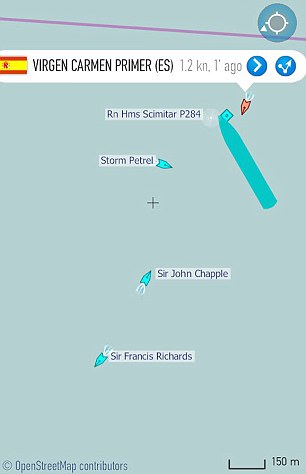 Boatrace: The trawler Virgin Carmen 1 had been fishing illegally in UK waters off Gibraltar, and when Royal Navy vessels confronted them, the situation turned into a stand-off 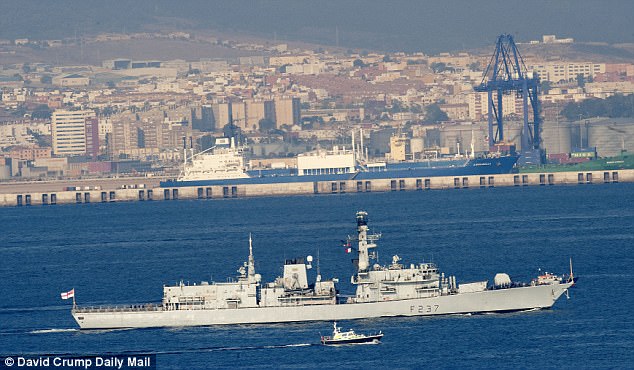 In April this year, British vessels were forced to chase off Spanish navy ships on no less than three occasions.

On April 29, the The P78 Cazadora, from the Spanish navy’s Descubierta Class, deliberately entered the northern side of the Bay of Gibraltar.

Earlier this month, Spain’s foreign minister has said his country will not block a post-Brexit agreement between the UK and European Union to push its sovereignty claim on Gibraltar.

Alfonso Dastis said Spain would not ‘jeopardise’ any future deal by making demands to alter the British overseas territory’s status.

It comes after fears that Brussels negotiating guidelines may give Spain a veto over the Rock’s inclusion in any UK-EU trade deal.

Prime Minister Theresa May reacted to those suggestions by insisting Gibraltar´s status was not up for discussion during withdrawal negotiations.

In a 2002 referendum, Gibraltarians rejected by 98 percent a proposal for joint British-Spanish sovereignty.