Royal Navy’s bomb squad destroys a huge 2,175lbs WWII device discovered in the wreckage of a 17th century warship off the Southend coastline

The Royal Navy’s bomb squad has destroyed a huge 2,175lb World War Two device discovered in the wreckage of a 17th century warship off the Southend Coastline.

The explosive was towed away and due to the complexity of the task and difficult weather conditions, it took the team six days, 216 man-hours, and around 20 dives to remove the device.

Divers with Historic England first discovered it during an archaeological dive.

It was found on the 350-year-old protected shipwreck of ‘London’ which lies in two parts near the pier. 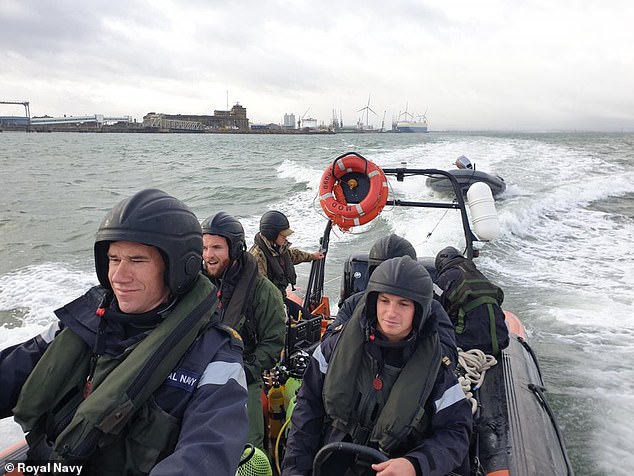 After divers managed to retrieve it, it was detonated five miles away at the disposal site at Shoeburyness.

The officer in charge of Southern Diving Unit Two, which is usually based in Portsmouth said the complexity of the task ‘should not be underestimated’.

Lieutenant Ben Brownsaid: ‘Dealing with one of the largest pieces of German Second World War ordnance in the Thames Estuary presents some of the most challenging diving conditions there are to work in.

‘With nil visibility underwater and significant tidal flow, the diving windows are extremely limited and all work on the ordnance must be done by touch. 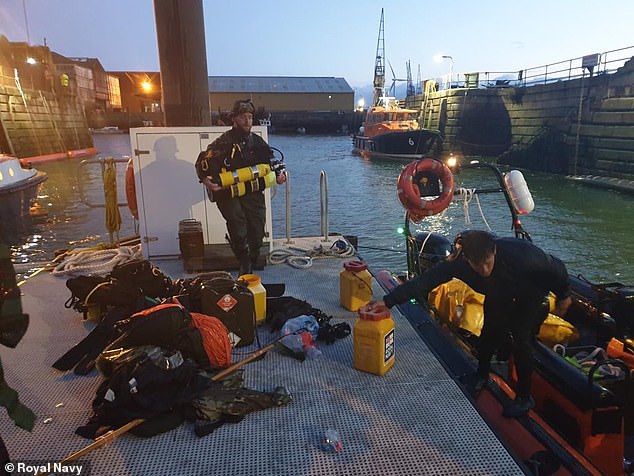 ‘The deteriorating weather conditions of this week also added another layer of complexity, and all whilst working next to one of the busiest shipping channels in the UK.’

He added that these conditions are what Royal Navy Clearance Divers are trained to work under.

The man-power behind the wreckage

Before they were able to safely get rid of the device, a team of eight people had to be assembled.

– It was a six day operation

– The team spent 27 hours on the water

He then went on to praise his team for an excellent job of keeping the public and other mariners safe.

During the Second World War, German parachute ground mine contained 2131bs of Hexamite, which is equivalant to 1,690lbs of TNT.

It was known as the GC and had been one of the largest pieces of ordnance used by the Luftwaffe during that time.

Lt Brown added: ‘The mine, most likely dropped to target one of the numerous docks in the Thames Estuary, was in extremely good condition given its age.

‘This task was completed by SDU2 but it would not have been possible were it not for the cooperation and assistance from numerous other agencies.’