How WILL they pay £2.4million Frogmore bill? Royal officials are baffled at how Harry and Meghan intend to repay huge cost of refurbishing their UK home

By Rebecca English, Royal Correspondent for the Daily Mail

Royal officials have no idea yet how Harry and Meghan will pay back the £2.4million spent by taxpayers on refurbishing Frogmore Cottage.

As part of their ‘exit package’, the couple have offered to refund the cost of building work at their UK family home paid for by the Sovereign Grant, money given by the Government to the Queen.

When they announced their plan to step down as senior royals, the Sussexes said they wanted to keep the five-bedroom house on the Windsor estate so they would have a family home in the UK.

But after the outcry over the huge sum paid by the public for a home the couple will now barely live in, royal officials agreed with Harry and Meghan they would repay the cash.

However, officials could not confirm yesterday how this would be done or how long it would take, saying: ‘The mechanism by which they pay the money has yet to be worked out.’

It is thought Prince Charles will continue to fund his son for at least a year, either via the Duchy of Cornwall or from his personal investments. Crucially, no public funds will be used.

But sources were unable to confirm whether ‘the bank of dad’ would bail the couple out.

‘This will all be sat down and discussed in due course,’ a source said. 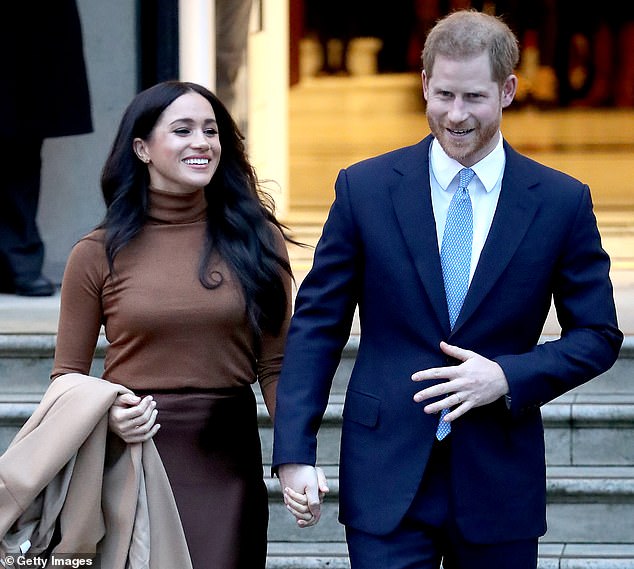 As part of their ‘exit package’, Harry and Meghan have offered to refund the cost of building work at their UK family home paid for by the Sovereign Grant, money given by the Government to the Queen

It is also unclear what rent Harry and Meghan will pay on the property. Officials say the couple will pay the Crown Estate, which oversees the property, an undisclosed figure in order to keep it as their family home.

They dismissed claims this would be a nominal ‘peppercorn’ rent, saying a fair commercial rate would be agreed. This could be anything from £5,000 to £30,000 a month.

Frogmore, a Grade II-listed property, was converted from five apartments, needing significant structural work paid through the Sovereign Grant. Fixtures and fittings were paid for by Harry and Meghan, and Charles helped to finance the project.