Mourning members of the Royal Family swapped their smiling social media profile photos to their official coats of arms today in a mark of respect to Prince Philip.

The Duke of Edinburgh passed away peacefully at Windsor Castle this morning, aged 99.

The Royal Family issued a statement reading: ‘It is with deep sorrow that Her Majesty The Queen announces the death of her beloved husband. The Royal Family join with people around the world in mourning his loss.’

Following the sad news, the Royal Family changed its social media profile image – which had shown a jolly image of the Queen – to the royal coat of arms of the United Kingdom.

The Duke of Edinburgh passed away peacefully at Windsor Castle this morning, aged 99. Pictured in July last year

Kensington Royal, the handle of the Duke and Duchess of Cambridge, also changed its image – which had shown the couple with their children Prince George, Princess Charlotte and Prince Louis clapping for carers from their Norfolk home Anmer Hall last year – to their official monogram.

Clarence House also adopted its crest, the Prince of Wales’s feathers, to pay their respects. In a sad twist of fate, today is also Prince Charles and Camilla Parker Bowles’ 16th wedding anniversary.

All three Instagram accounts shared the black and white image of the Duke of Edinburgh, dressed in his military uniform, released by the Palace today.

Prince Philip spent his final days at Windsor Castle with his wife after a 28-night stay in hospital, having been admitted in mid-February for an infection and a pre-existing heart condition.

Following the sad news, senior members of the Royal Family changed their social media profile images to their official crests as a mark of respect

The announcement of his death was made today after senior members of the royal family including Prince Charles and the Duke of Cambridge were told.

He is expected to have a royal ceremonial funeral and Union Jack flags will fly at half-mast around Britain following his death today.

The Duke, who was just two months short of his 100th birthday, will not lie in state and there will be no state funeral because he had insisted that he did not want the ‘fuss’.

Instead a service will take place at St George’s Chapel at Windsor Castle in Berkshire – although the precise details are unclear due to Covid restrictions.

Lord Chamberlain, the most senior officer of the royal household, will be in charge of arrangements. 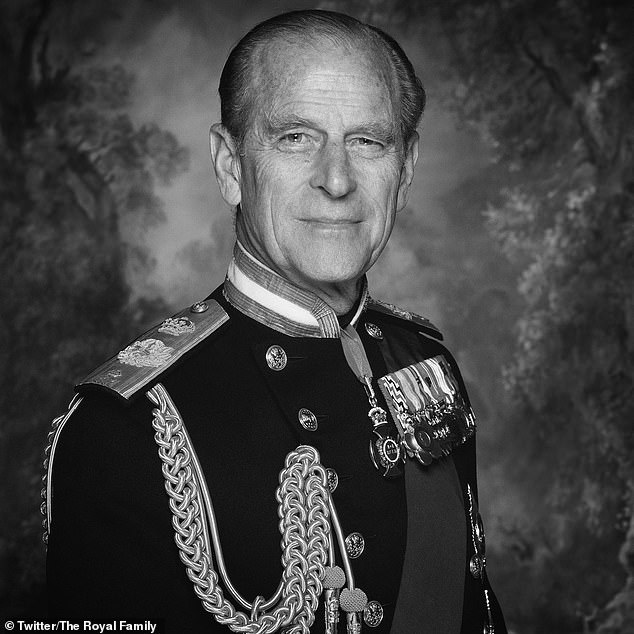 All three senior Royal Family Instagram accounts shared the black and white image of the Prince, dressed in his military uniform, released by the Palace today

His death plunges the nation and the Royal Family into mourning, and brings to an end Philip’s lifetime of service to Britain and to Elizabeth, the Queen who adored him since her teens.

A statement within a wooden frame was pinned to the railings outside Buckingham Palace in London, with a series of gun salutes also possible.

The Queen will sign off the funeral plans and confirm a period of mourning. There will also be a memorial website where people can leave their condolences.

Boris Johnson addressed the nation outside No 10 Downing Street and said: ‘We give thanks, as a nation and a kingdom, for the extraordinary life and work of Prince Philip, Duke of Edinburgh’.