A vegan activist slammed for keeping a pig she saved from slaughter in her two-bed flat and taking it to Wagamama has been banned from visiting him by the RSPCA.

Alicia Day was forced to give up the hog – which she named Jixy Pixy – to the animal charity when the landlord of her tiny pad in Southall, West London, kicked her out.

But the RSPCA has just told her the pig has been ‘moved to a farm far away’ and told her in an email: ‘I know this will be disappointing to hear as you clearly miss him.’

Ms Day, who rescued the 11-week-old cross-breed she saved from slaughter on a Devon farm, has carried out a nationwide search for the pig, and issued an appeal on Instagram.

Alicia Day was forced to give up the hog – which she named Jixy Pixy (pictured in a photo taken by the RSPCA) to the animal charity when the landlord of her tiny pad in Southall, West London, kicked her out 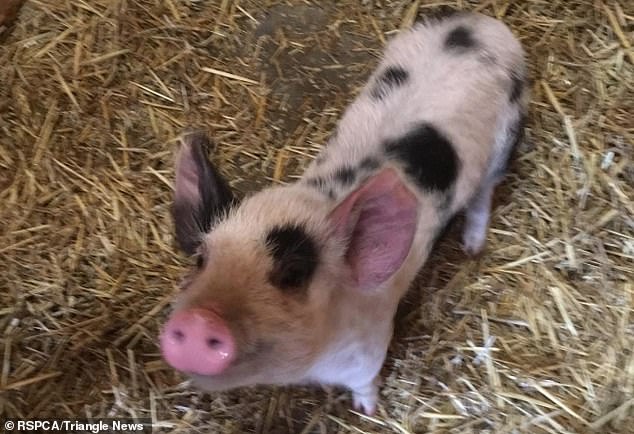 The RSPCA have provided photographs of the pig, which they say has been moved to a ‘farm far away’ 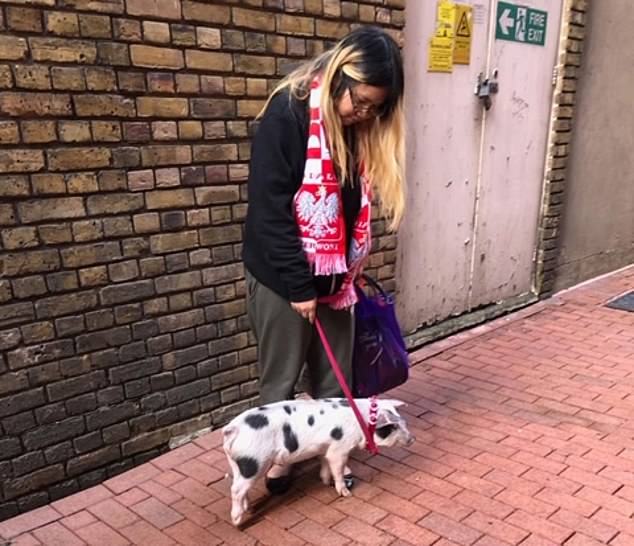 The 31-year-old says she is distraught after the animal charity refused to tell her where they had moved Jixy Pixy, an 11-week-old cross-breed she saved from slaughter on a Devon farm

The 31-year-old has boasted she is going to hire a private detective to find out where the animal charity have moved her to.

But the RSPCA insist that she agreed all contact would be ceased after signing over the pig.

In an email to Alicia they wrote: ‘Thank you for taking the time to contact me about the piglet which you transferred ownership of. 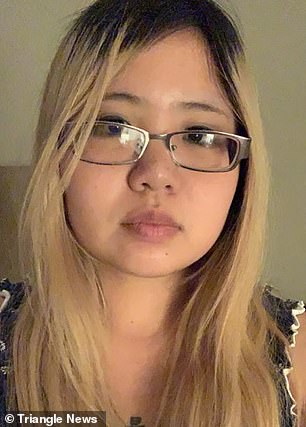 After conducting a fruitless nationwide phone search and issuing an emotional plea on Instagram, Ms Day says her only option is to call in lawyers

‘Unfortunately, we are unable to allow you to visit the piglet as he has been moved to a farm far away, and once you have transferred ownership of an animal, we make all the arrangements to find a new home for them.

‘However, I know this will be disappointing to hear as you clearly miss him. So I have asked the farm to provide me with some pictures of him.’

‘Here are the pictures that were taken on Monday of him having a lovely time in his new home.’

But Alicia, who has tried to retract the signover, questioned the authenticity of the pictures and claims the pig should have put on more weight.

She is also concerned that the pig will be slaughtered at the farm – but the RSPCA say that will not be the case.

Alicia paid £30 for the pig before keeping it in her tiny pad in Southall, west London. Her landlord booted her out on November 4 after learning about the unwanted new tenant.

During their time together Ms Day took Jixy Pixy on trains, allowed him to walk off the lead on busy city streets and even took him to the park like a dog. 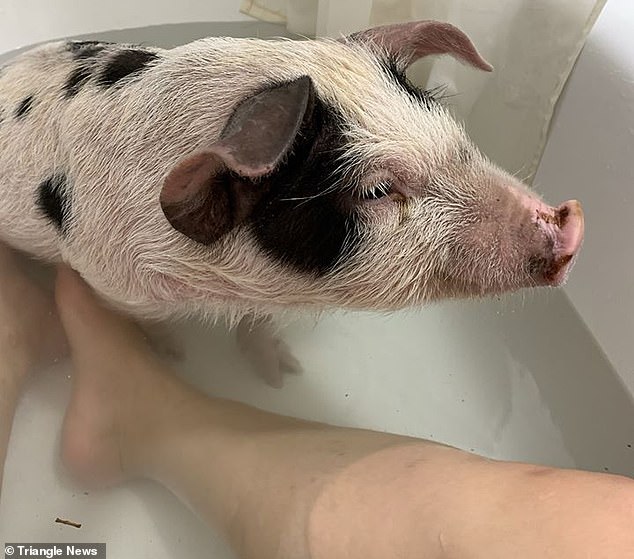 Md Day then began introducing Jixy-Pixy to life in the city with trips on the tube, walks in the park and even sharing baths. They also shared meals at his favourite restaurant, Wagamama

They even shared meals at his favourite Japanese restaurant, Wagamama.

Alicia wrote on Facebook: ‘I’m currently working with a lawyer to find out where he is, if that doesn’t work I’ll hire a private detective.

‘This isn’t over until the day I die.’

In a statement the RSPCA added: ‘We are still in the process of finding him a suitable place at an RSPCA rehoming facility with appropriate pig accommodation, as this does take time.

‘Once the pig has been fully assessed he will be featured on the RSPCA’s Find a Pet rehoming site.’ 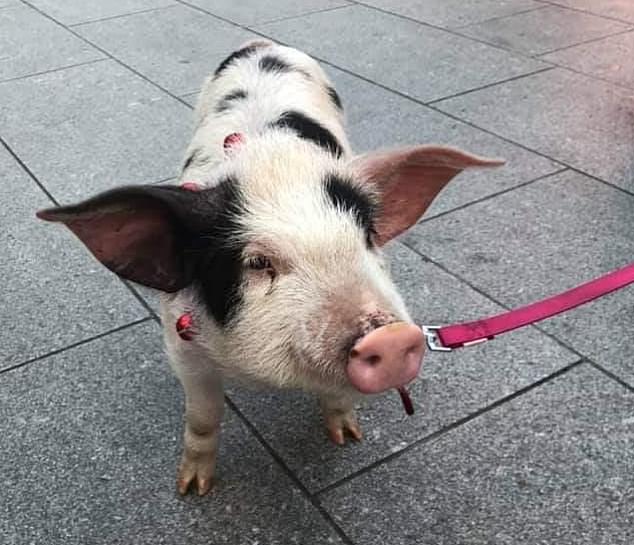 Alicia Day, a  vegan activist slammed for keeping a pig in her two-bedroom flat, is set to sue the RSPCA for denying her access rights to her former pet that she calls her ‘child’

Alicia said she was desperate to reunite with the pig after spending four days bathing with it and walking it on a lead in Ealing Broadway.

After buying him from the farm in Exeter, Devon, Alicia said: ‘I can’t save them all but I thought I would save one. Anything for my baby.’

She fed him Tofu Pad Thai in Wagamama and said she instantly loved him like a child.

After suddenly having nowhere to live, Alicia contacted the RSPCA to help find Jixy Pixy a new home.

Alicia is a masters graduate in international business and said she now wants to explore animal rights activism.

She stopped eating meat aged 12 before becoming a vegan this year.

Ian Woodhurst, farming campaigns manager at World Animal Protection, said earlier this month that pigs had complex needs and should never be kept in a home.

He added: ‘Pigs require a specific diet, need to be kept apart from other animals and be able to express natural behaviours such as rooting and foraging in earth.

‘They need a large space, minimum area of 36 square meters, and access to an outdoor wallow and shelter from the sun.

‘In addition pigs require a license if being moved from the home to the vet for example and are illegal to transport in cars.’