The doctor on board the Ruby Princess told authorities there was no risk of coronavirus infection on the ill-fated cruise ship when it arrived in Sydney, an inquiry has heard.

The special commission of inquiry into the Ruby Princess heard on Wednesday that Dr Ilse Von Watzdorf had marked ‘no’ in response to a question on a Maritime Arrivals Reporting System form about whether there was the potential spread of infection or disease from the ship.

Another question on the form about difficulty breathing and persistent coughing symptoms had been left blank as the ship, which has so far been linked to 21 COVID-19 deaths and up to 700 infections, docked in Sydney on March 19. 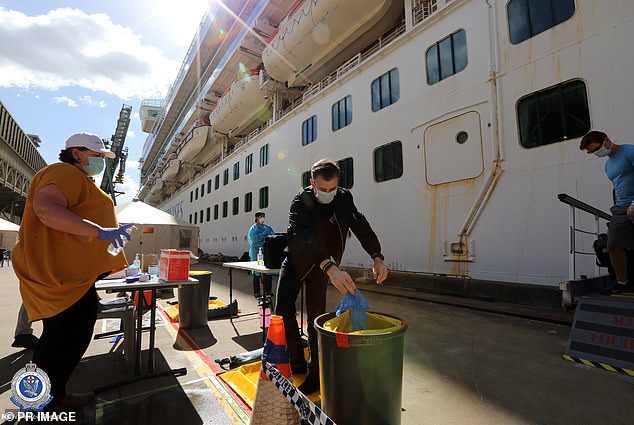 Crew members of the Ruby Princess cruise ship are now leaving the vessel on April 21, 2020, which has been docked at Port Kembla for more than two weeks following a catastrophic COVID-19 outbreak.

When asked by commissioner Bret Walker SC why she responded ‘no’ to the question when 24 passengers had reported high temperatures, Dr Von Watzdorf said she felt ‘disadvantaged’ because she did not have access to the form during questioning.

But she suggested she would not have wanted at the time to convey there were no passengers showing COVID-19 symptoms on board.

Dr Von Watzdorf also told the inquiry’s opening day she was surprised the ship was allowed to unload its 2700 passengers before coronavirus test results were in.

‘If it was my decision, I would’ve perhaps waited like the previous time,’ she said, responding to questions via video link from the ship docked in Port Kembla where she remains with hundreds of crew.

She confirmed illness on board the ship increased later in the trip and said a questionnaire was sent out to all passengers after acute respiratory and febrile conditions began to flare about March 15.

Mr Walker asked Dr Von Watzdorf if it was correct to say there were no passengers showing COVID-19 symptoms late on March 18 and early on March 19, to which the doctor replied no. 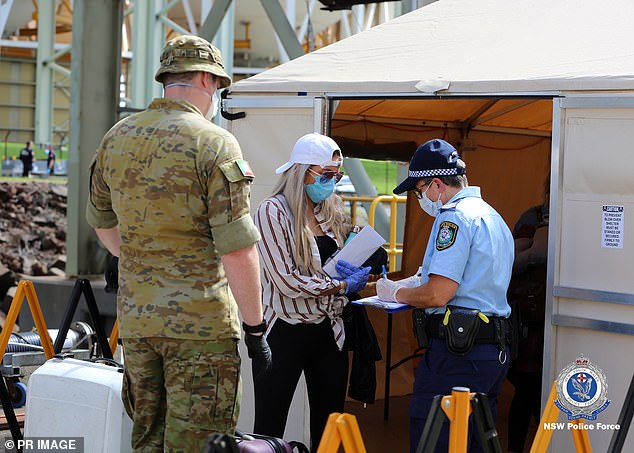 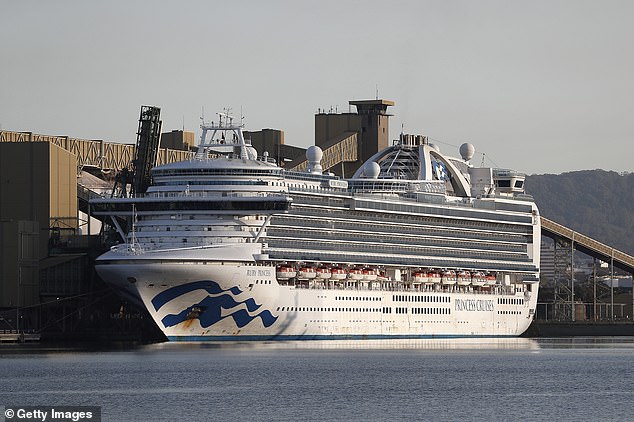 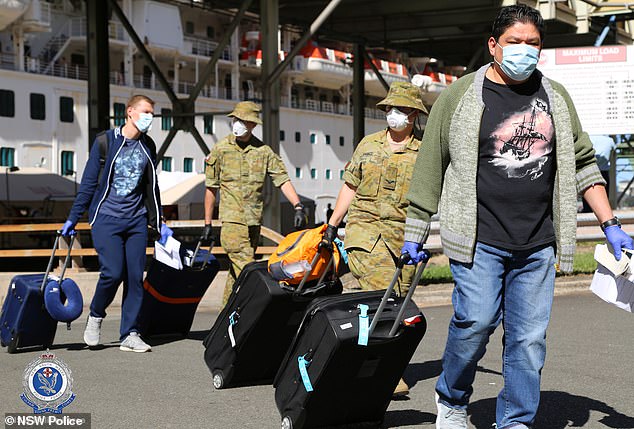 When asked about the signs of COVID-19 on the ship during the same time period, Dr Von Watzdorf said she did not have a one-word answer for the commissioner and said context was needed.

The inquiry will continue on Thursday. It is running parallel to a police probe that is expected to deliver its findings by September.

NSW Labor leader Jodi McKay said there was a lack of transparency from the premier who failed to mention the commencement of the inquiry at her news conference hours before it began.

‘The reason why I believe this has happened is because the Ruby Princess is being ordered off the coast of NSW tomorrow … and there are people on board that vessel that need to give evidence,’ Ms McKay said on Wednesday.

About 57 crew members on Tuesday disembarked the ship and travelled to NSW hotels before being repatriated during the next three days on international charter flights.

A further 115 crew members from nine countries disembarked on Wednesday.

Of this group, 94 tested negative for coronavirus and were taken to either Sydney Airport or a hotel to await flights to their country of origin, NSW Police said in statement.

A total of 21 crew members who disembarked the ship have tested positive for COVID-19 and have been taken to hotels managed by NSW Health for a quarantine period of 14 days.

‘Stringent protocols were maintained to ensure the movement of these individuals posed no risk to the public,’ NSW Police said.

NSW Health is monitoring the situation.

The ship’s captain is coronavirus-free and able to sail the vessel.

Most of the crew have remained in isolation on the ship and 190 of those on board had tested positive for COVID-19 as of Sunday night.

Another 12 seriously ill crew members infected with coronavirus have previously been taken to NSW hospitals.