A teenager whose family believe the HPV vaccine left her paralysed are trying to raise £10,000 for private mental health therapy.

Ruby Shallom, 18, had the jab five years ago as part of the NHS’s cervical cancer programme and then allegedly developed FND – functional neurological disorder.

She gradually lost feeling in her whole body and became paralysed by 2016, which left her wheelchair-bound and unable to move anything but her left arm.

Miss Shallom is still unable to walk and her mental health nosedived this year, amid an ongoing battle with depression that saw her try to kill herself.

Parents Aron and Nicola Shallom, from Bracknell, fear it’s their daughter’s last hope but their funds have run low.

The HPV vaccine is regarded as safe by health officials, and Miss Shallom’s specialist believes her FND could have been triggered by emotional trauma after watching her sister battle cancer as a child. 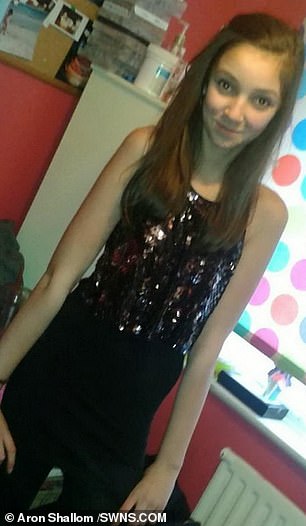 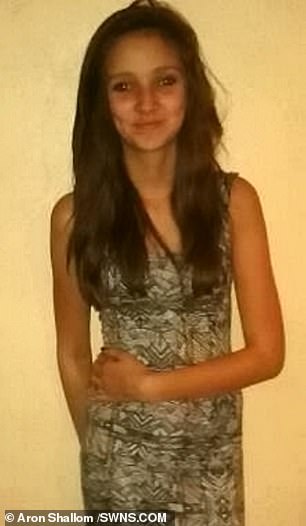 Miss Shallom, of Bracknell, had the HPV vaccine five years ago and then developed FND – functional neurological disorder. Pictured aged 12, left and right 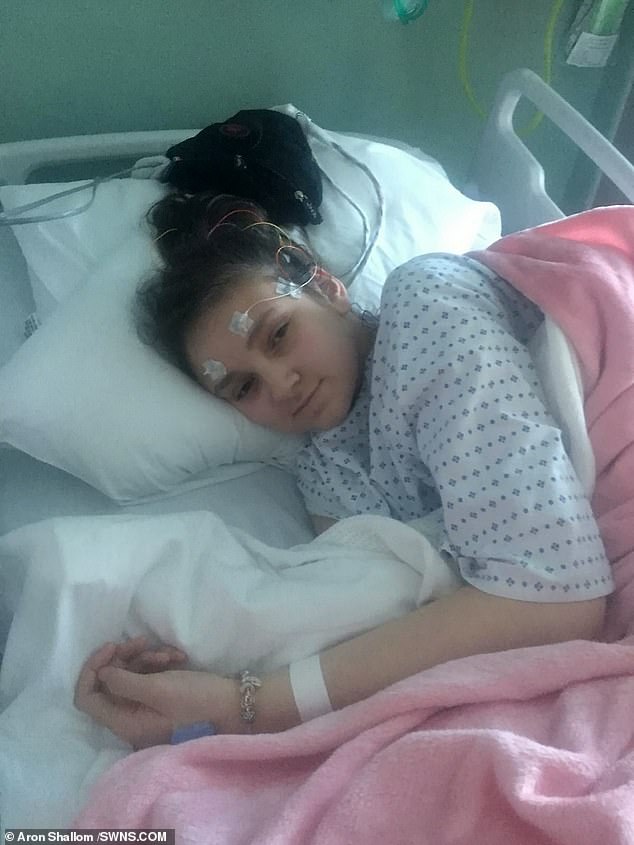 Miss Shallom was admitted to Prospect Park Hospital in Reading, an NHS mental health clinic, and was treated by a psychiatrist for one week.

The Shalloms paid for a transferral to Priory Hospital Woking, a private facility which provides treatment as well as therapy, after attempting suicide.

Her parents have been able to afford the expensive private clinic, which charges around £790 a night, thanks to their health insurance with WPA.

However, their £15,000 quota runs out today, April 26, and Miss Shallom will be discharged on Saturday unless enough money can be raised to prolong her treatment.

With chronic pain and fatigue plaguing her every day, Miss Shallom said: ‘I guess the trauma of everything I’ve been through has caught up with me.

Miss Shallom added: ‘At Prospect Park I think I would only get worse and I don’t really know what it would be like if I just went home – or if I can even go home.

‘If I went home I could still be a danger to myself and I would have to have a carer come in two or three times a day just to check up on me.’

Miss Shallom added: ‘I feel low all the time – I’m not coping at the moment.’

Her family are now appealing for the public to make donations as they raise money to keep her at the Priory.

Mr Shallom said: ‘She’s not well enough to come home – and we don’t want to put her on the NHS which won’t keep her safe and not simply make her better.

‘We’ve been through some tough times – we’re dealing with this as best as we can.’ 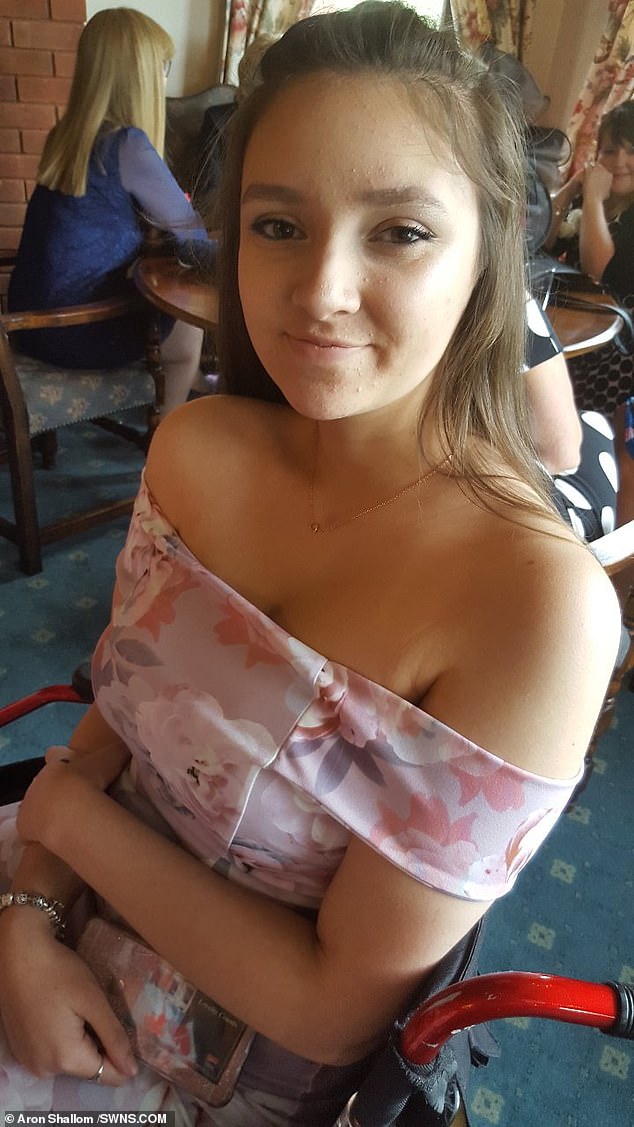 Miss Shallom was given a triple vaccination in two month intervals during 2014 to protect against the risk of contracting the HPV infection, which can cause cervical cancer.

The HPV vaccine, Gardasil, is routinely offered to 12-13 year-old girls as part of the NHS’ cervical cancer programme.

Health authorities around the world, including the World Health Organization, have extensively reviewed the vaccine and have concluded it is safe.

But HPV vaccinations rates have plummeted globally – to as low as one per cent in some countries – due to largely unfounded fears that the jab causes disability.

Miss Shallom noticed that she had difficulties walking from December 2015 as she dragged her feet behind her – and a month later, she was using crutches.

In May 2016, her condition deteriorated further as she became so weak she couldn’t walk at all – and developed total numbness from the waist down.

She began to display gastrointestinal symptoms and swollen glands too, and she was rushed to Frimley Park Hospital, where she was diagnosed with incontinence.

Miss Shallom was hospitalised for six weeks and woke up one morning with a crushing pain in her right arm which left her incapable of even wiggling her fingers.

By the end of the day, her back muscles ‘gave way’ and the paralysis spread through her whole body apart from her left arm. 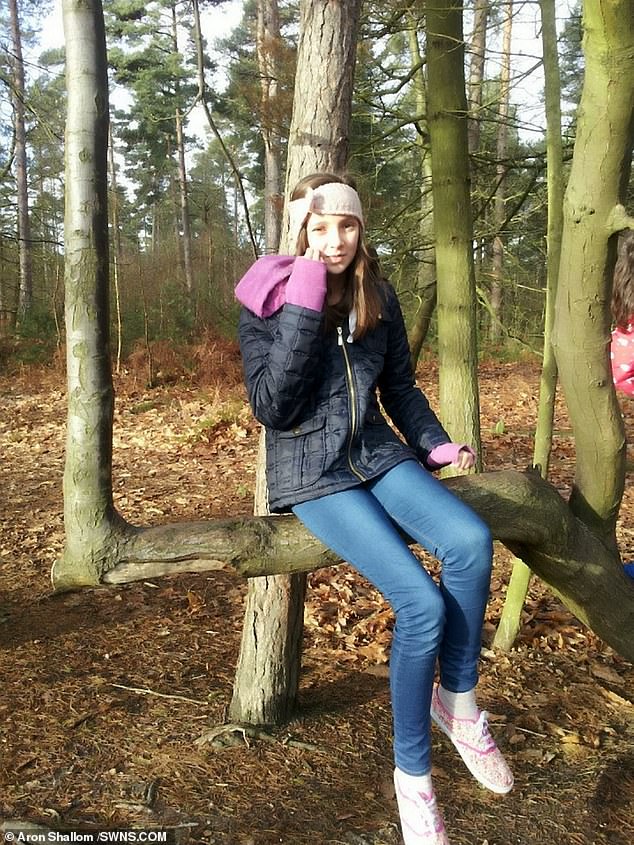 With money running out, parents Aron and Nicola fear their daughter, pictured aged 12, will kill herself if she has to leave private therapy and treatment 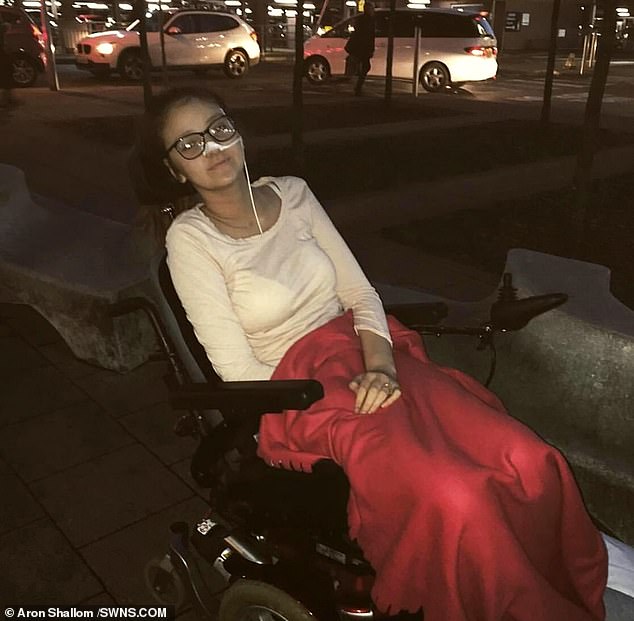 Over the following two years since her HPV vaccine, Miss Shallom became extremely sick, losing her appetite and fainting repeatedly while she battled debilitating chronic headaches and fatigue

Too weak to support herself on a zimmer frame, Miss Shallom became wheelchair-bound.

She was diagnosed with FND, neurological symptoms which affect the functioning of the body, at St George’s Hospital in July 2016.

Now at her physically fittest since 2014, Miss Shallom can walk up to 20 metres in one spurt without aid or stopping.

Though she made a steady bodily recovery, her mental health took a nosedive this year.

In March, Miss Shallom was admitted to Prospect Park Hospital but was transferred to Priory Hospital Woking earlier this month for 19 nights, where she has received extensive group and one-on-one therapy.

Lou Dossett, a family friend who used to teach Miss Shallom when she attended St Joseph’s Primary School, set up a crowdfunding page on 19 April, and has raised nearly £2,200 of a £10,000 target from public contributions. 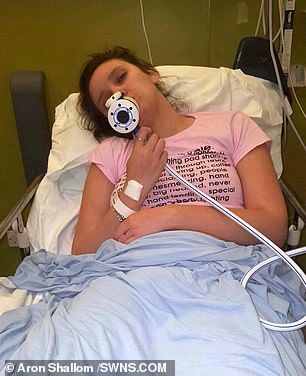 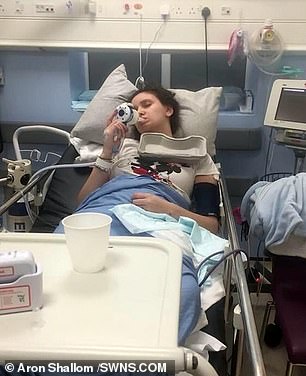 In May 2016, Miss Shallom became so weak she couldn’t walk at all and developed total numbness from the waist down. Pictured aged 17 in hospital due to her condition 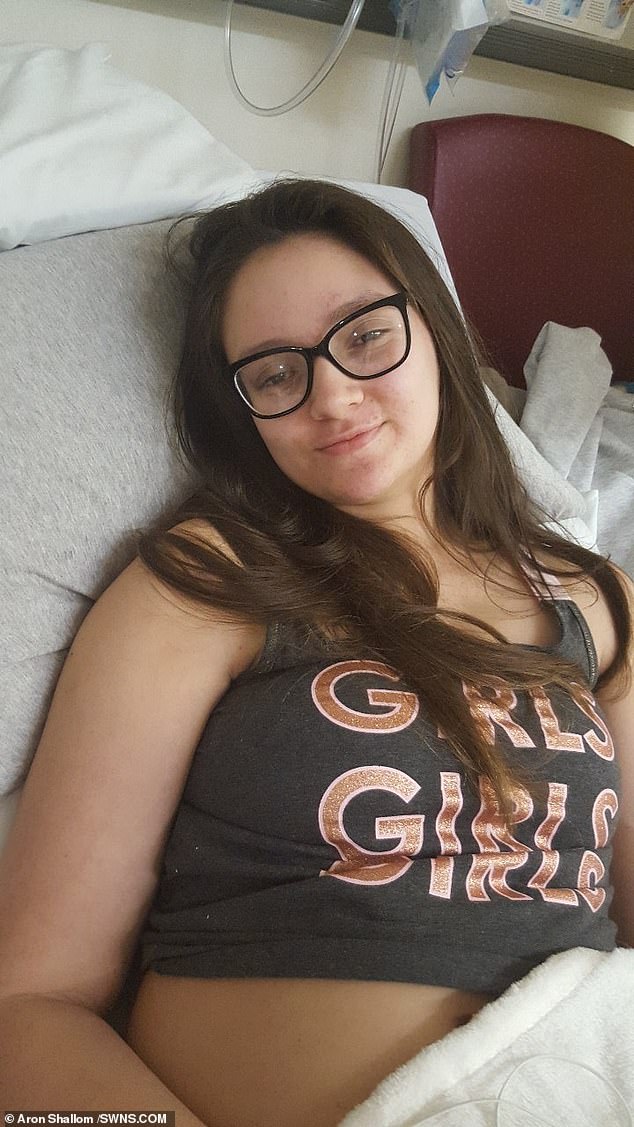 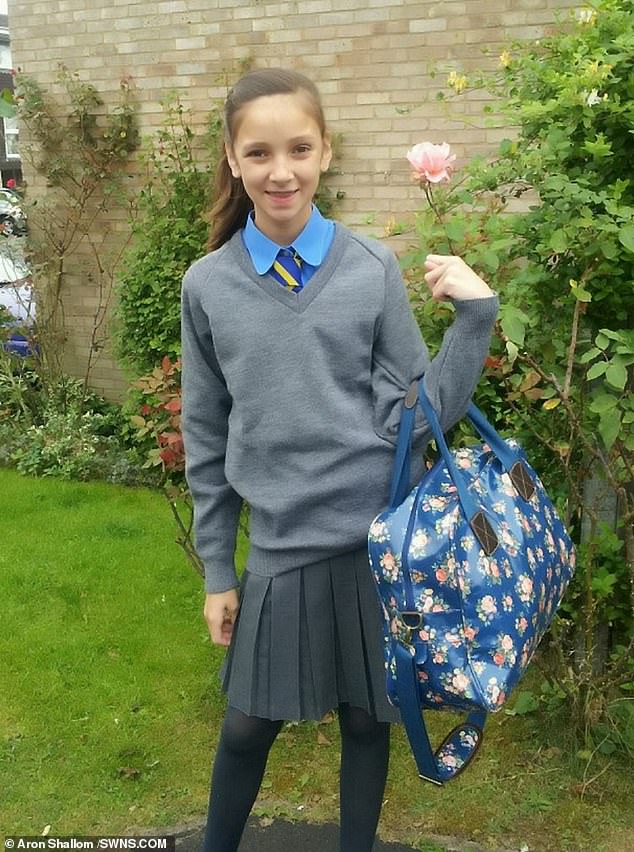 Miss Shallom, whose depression becomes more pronounced at nighttime when her therapy has finished, said it would mean the world to her and her family if she could stay on in a private capacity.

She said: ‘There’s no particular trigger for it really – it just seems to be around five or six o’clock and then gradually gets worse.

‘At Priory, there’s lots of therapy and everyone has been lovely.

‘I have made lots of friends with mental illness too – just talking to people has been therapeutic and done more good than constant medication.

‘This is my only hope – it’d mean so much to me if I stayed here, and it would only need to be for a few more weeks, I would imagine.’

Claims that HPV has caused disability are backed by various pressure groups including Time For Action and AHVID, the UK Association of HPV Vaccine Injured Daughters.

A spokesperson for AHVID said that, of around 20million in total, 600 families are registered with the group who have injured daughters following the HPV jab.

But the issue is hotly debated in the scientific community – even by the specialist who met with Miss Shallom and her mother at St George’s Hospital in July 2016.

In a letter dated 14 July, the expert refuted any causal link, and explained – though Miss Shallom’s condition was real and not imagined – her central nervous system was intact and not damaged after the triple HPV vaccination.

The specialist speculated that FND has in the past been caused by severe emotional stress.

He suggested Miss Shallom’s sister Evie’s long-term battle with Hodgkin lymphoma – a cancer for which she’s had four rounds of chemotherapy and a bone marrow transplant from her brother Oliver – could have been an underlying trigger.

He said: ‘Nicola expressed an understandable concern that the HPV vaccine might have damaged her nervous system in some way leading to her current symptoms.

‘I explained that this could not be an explanation for the type of weakness and test results that she has because if damage had occurred to the nervous system by any cause, it would not be the case that muscle activation could occur with different examination manoeuvres, nor that her test results would be normal as they are.

‘We discussed that historically functional symptoms have been viewed, perhaps rather simplistically, as reactions to psychological stress and difficulty.’

IS THE HPV JAB SAFE? HOW THE CONTROVERSY HAS LED TO A DROP IN VACCINATION RATES

WHO IS GIVEN THE JAB?

All girls aged between 12 and 18 are are offered a free vaccination against HPV by the NHS to help protect them against cervical cancer under a programme launched by UK health officials in 2008. However, boys aren’t given the jab.

In the US, the CDC recommends for all children to receive the vaccine, which was approved by the FDA in 2010, between the ages of nine and 12. Catch-up jabs are then available for men up to the age of 21 and women up to 26.

It’s estimated that about 400 lives could be saved every year in the UK as a result of vaccinating girls – while around 30,000 cases of cancer could be avoided in the US each year with the jab, according to figures.

However, a wave of allegations over the controversial HPV jab has caused vaccine rates to plummet to as low as 1 per cent in some countries.

Anti-vaccine campaigners have the slump, which has badly affected Japan, which had a vaccine rate of 70 per cent just four years ago.

They have posted hundreds of unsourced videos online featuring girls in wheelchairs that they claim have been disabled by the jab.

The downturn in vaccination rates came after an allegedly fake study on mice linked the vaccine to neurological issues.

However, the world’s leading health officials have repeatedly slammed anti-vaxxers for ‘promoting pseudoscience’.

Government authorities agree there is no evidence to support a link between HPV vaccination and chronic illnesses.

They concluded there is ‘no credible evidence of a link between the HPV vaccine and a range of chronic illnesses’.

They warn the vaccine has been proven to be safe in more than 10 years of studies, and it is essential for preventing dozens of HPV-linked cancers.

And last year, the revered John Maddox prize for ‘sense about science’ was awarded to a Japanese researcher who debunked the jab claims.

HOW MANY SIDE EFFECTS HAVE THERE BEEN?

English health officials received 3,972 ‘yellow cards’ – warnings of side effects – between 2010 and 2013 for the controversial HPV jab Gardasil.

In Europe, 11,867 reactions to Gardasil have been recorded up to February 2017, according to The European Medicines Agency.

Many report symptoms of chronic fatigue syndrome, and cases of girls being left paralysed are rare. Fatalities have occurred, reports also showed.