The indicted associate of Trump lawyer Rudy Giuliani has broken his silence since his arrest to make the claim that President Trump directed his actions in Ukraine.

Lev Parnas, who is accused of federal campaign finance violations, came forward along with his lawyer on MSNBC to say he was not freelancing when he collaborated with GIuliani in an effort to get the Ukrainians to investigate Trump rival Joe Biden while going after the U.S. ambassador to Ukraine.

The stunning assertion came just hours before Chief Justice John Roberts is to swear in 100 U.S. senators who are to act as a jury weighing two articles of impeachment against the president.

‘He was aware of all my movements. I wouldn’t do anything without the consent of Rudy Giuliani, or the president,’ Parnas told MSNBC in a sit-down interview on Rachel Maddow’s show. ‘I have no intent, I have no reason to speak to any of these officials,’ he said.

He continued: ‘I mean they have no reason to speak to me. Why would President Zelenskiy’s inner circle, or Minister Avakov, or all these people, or President Poroshenko meet with me? Who am I? They were told to meet with me. And that’s the secret that they’re trying to keep. I was on the ground doing their work.’

Parnas spoke as the House Intelligence Committee released yet another batch of his messages, after he and his lawyer turned them over days ago. The disclosure came on the day House impeachment managers formally told the Senate the House would transmit two impeachment articles against Trump.

Parnas said his work was with the consent of Rudy Giuliani and the president. A trove released Tuesday revealed a Giuliani letter to the president of Ukraine seeking a meeting and citing Trump’s consent 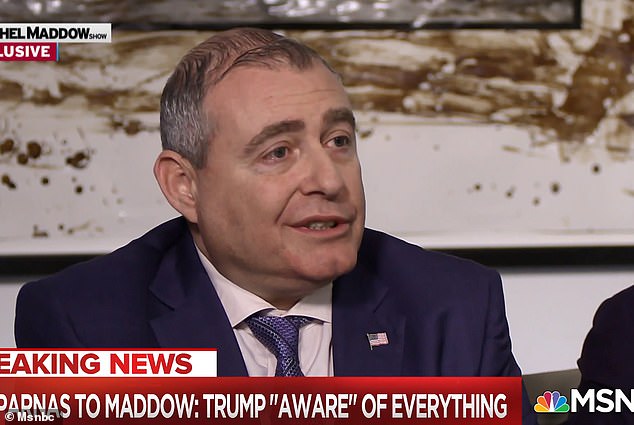 Indicted Giuliani associate Lev Parnas turned over WhatsApp messages and other information to House investigators. He spoke to MSNBC Wednesday

‘What should I send don to tweet,’ writes Joseph Ahearn, who is listed by pro-Trump super PAC America First Policies as director of development, to Parnas

The documents include a series of back-and-forth messages about getting a retainer completed. An April, 2019 message from Parnas seeks to have it translated into Russian 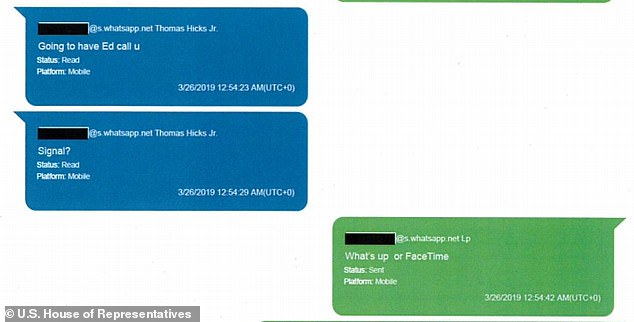 Among the confusing trove of information is one message that identifies first daughter Ivanka Trump, a key advisor who Trump pointed out by name during remarks lauding a new deal with China in the White House Wednesday.

Trump lawyer Victoria Toensing, in a message to Parnas, mentions Ivanka in a discussion about a White House meeting. ‘POTUS stood us up and sent Ivanka to speak in his stead. Victoria,’ reads the message, dated March 3rd, amid the Ukrainian elections.

‘That’s what Rudy said,’ Parnas replied.  The messages are proceeded and succeeded by blacked out information.

‘What should I send don to tweet,’ writes Joseph Ahearn, who is listed by pro-Trump super PAC America First Policies as director of development in a March 20 message to Parnas.

Parnas has been photographed multiple times with Trump and key Trump World figures, including Don Jr.