Matt Gaetz, who represents Florida’s 1st district, originally said on CNN this week that the visit was odd, and confirmed his feelings in an interview with ABC’s George Stephanopoulos on Sunday morning.

‘It is weird that he’s over there, and I am grateful that… the president put out a statement that said that Rudy Giuliani does want to come into Congress and explain his role, explain what he’s been up to,’ Gaetz told ABC News in an interview on This Week.

‘And I believe that the president urging Mayor Giuliani to provide that clarity to the Congress will be helpful in resolving what seems to be odd having him over there at this time,’ he continued. 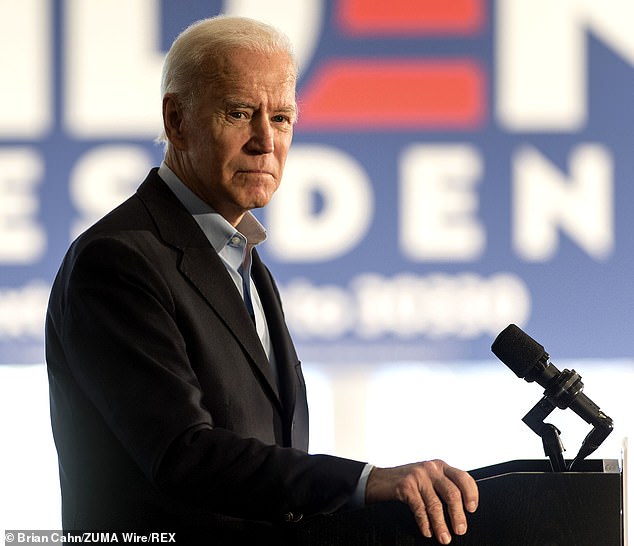 Rudy Giuliani says he has information harmful to Trump’s political rival and former Vice President Joe Biden. Giuliani has alleged that Biden, while still in office in 2016, pushed for the firing of Ukraine’s top prosecutor to end an investigation into Ukrainian energy company Burisma, where his son Hunter was a board member

Trump told reporters on Saturday that his personal lawyer wants to tell Congress about new information he supposedly discovered about Joe Biden during his recent trip to Ukraine.

‘He has not told me what he found, but I think he wants to go before Congress,’ Trump told members of the press at the White House before leaving for a trip to Florida.

‘I hear he has found plenty,’ he said, adding he has no spoken to the former Republican mayor of New York City about that information yet.

The president said that Giuliani will ‘make a report’ of his findings and will submit them to Attorney General William Barr and to Congress.

‘He has a lot of good information,’ Trump said. 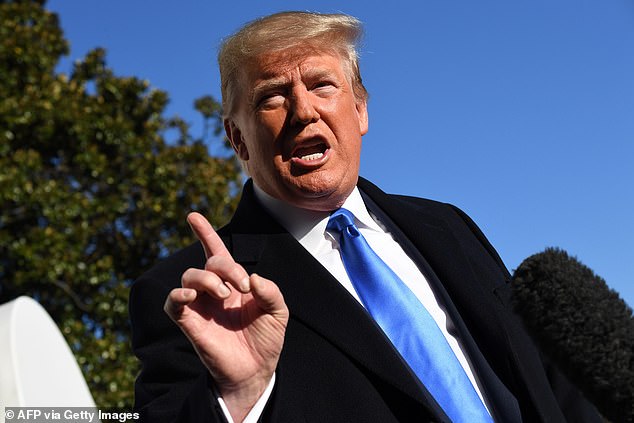 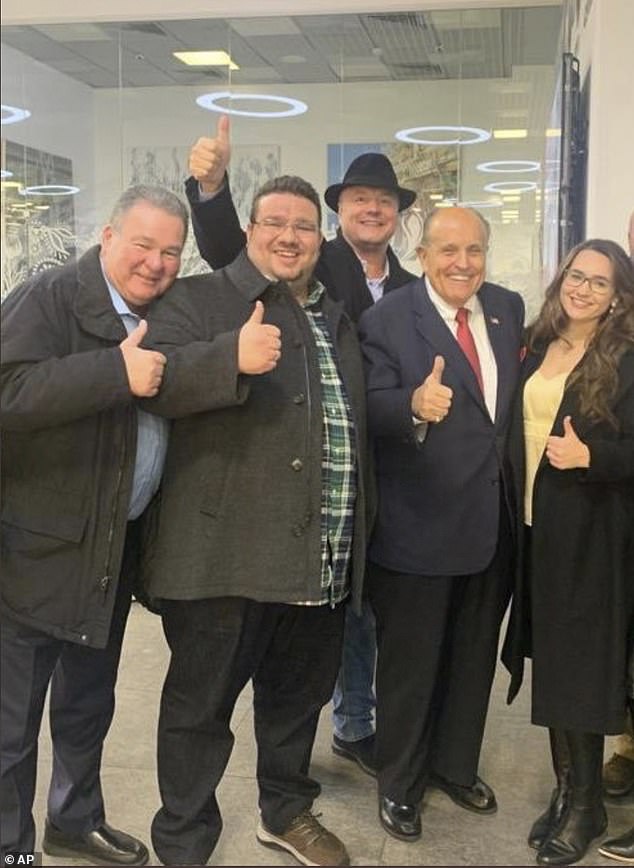 Giuliani is seen second to right on Friday before his departure from Kiev. The photo was posted to Twitter by Andrii Telizhenko (second from left), a former Ukrainian diplomat who once worked for Ukraine’s embassy in Washington 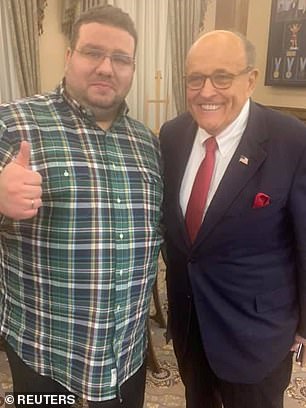 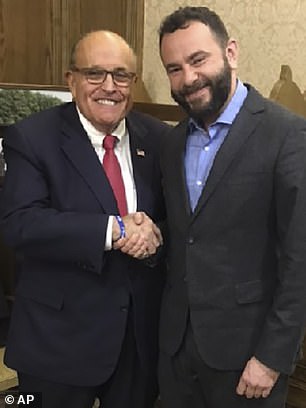 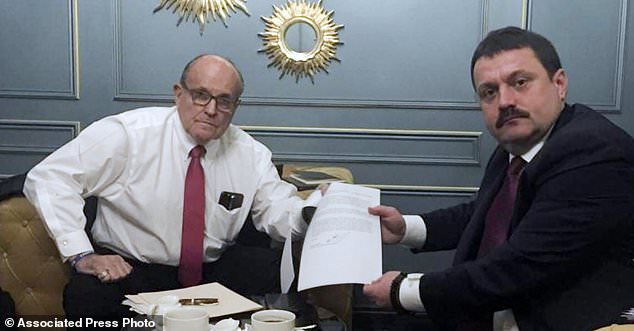 In this handout photo provided by Adriii Derkach’s press office, Giuliani meets with Ukrainian lawmaker Adriii Derkach in Kyiv on Thursday. Derkach has previously accused Hunter Biden of embezzling money from a gas company in Ukraine

‘I have not spoken to him about that information yet.’

Giuliani was in Ukraine on Thursday, reviving the efforts that landed him and Trump in the impeachment inquiry now roiling Washington.

The inquiry was triggered by a July 25 phone call in which Trump pressured Ukrainian President Volodymyr Zelensky to investigate Biden, his Democratic rival, and his son and also a discredited conspiracy theory that Ukraine interfered in the 2016 US election.

Giuliani was at the center of those efforts, conducting shadow diplomacy throughout the spring and summer.

On Thursday, he met in Kyiv with Andrii Derkach, a member of Ukraine´s parliament who has promoted unsubstantiated claims against the Bidens.

Derkach posted photos on Facebook with Giuliani and said the two had had a meeting to form a new group, Friends of Ukraine Stop Corruption.

‘Unfortunately, our country has been at the center of scandals about international corruption,’ Derkach said.

‘Among other things, there are facts about the inefficient use of American taxpayers’ money by representatives of Ukrainian state bodies.’

Giuliani was also photographed with Andrii Telizhenko, a former Ukrainian diplomat who has promoted the unproven claim that the Ukrainian government meddled in the 2016 elections by trying to help Hillary Clinton.

Telizhenko has been quoted frequently on pro-Trump media outlets where he has promoted the conspiracy theory that the Democrats faked the hacking of their own email servers in 2016 as a way of framing the Russians.

Giuliani’s visit to Kyiv came as House Speaker Nancy Pelosi announced in Washington on Thursday that the House is pressing forward to draft articles of impeachment against Trump, saying the president left Democrats with no choice because the country´s democracy is at stake.

The vote to charge the president with crimes could come before Christmas.

Before arriving in Kyiv, Giuliani stopped in the Hungarian capital. 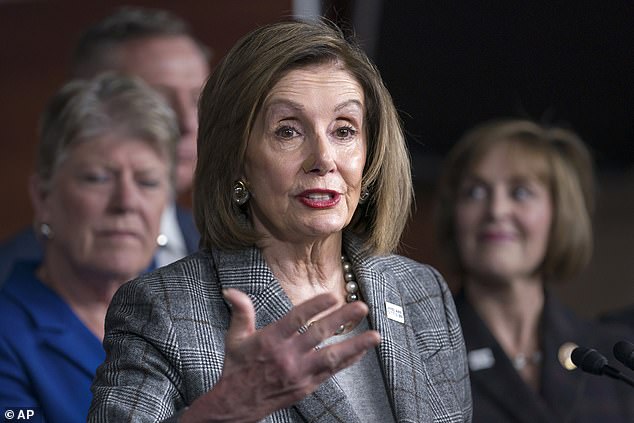 House Speaker Nancy Pelosi (seen above in Washington on Friday) announced that the House is pressing forward to draft articles of impeachment against Trump, saying the president left Democrats with no choice because the country´s democracy is at stake

She said they were filmed for a documentary for the One America News Network produced by Giuliani.

Giuliani is also reported to have met with two other ousted Ukrainian prosecutors – Viktor Shokin and Kostiantyn Kulyk.

Shokin and Kulyk have also made claims about Biden as well as other US officials who are alleged to have disseminated damaging information about Paul Manafort, Trump’s former campaign chairman.

There has been no evidence produced that has supported these claims, according to The New York Times.

Giuliani was allegedly behind the eventual premature recall of then-US Ambassador to Ukraine Marie Yovanovitch, who returned to the US several months before the end of her three-year assignment in Ukraine.

Giuliani has alleged that Biden, while still in office in 2016, pushed for the firing of Ukraine’s top prosecutor to end an investigation into Ukrainian energy company Burisma, where his son Hunter was a board member.

Hunter worked for Burisma from 2014 until earlier this year when he stepped down.

Derkach has previously disseminated information about Hunter Biden and Burisma that Giuliani has cited as evidence in his criticisms of the Biden family.