Rudy Gobert bracing for ‘weird’ return to Utah with Timberwolves, as former Jazz big man will face off vs. old team for the first time on Friday night after playing NINE years there

Rudy Gobert will visit the Utah Jazz as an opposing player for the first time in his career Friday night, and expects ‘a lot of emotions’ as he faces his former team.

Gobert spent the first nine years of his career in Utah but was traded in the offseason to the Timberwolves for a package including four first-round picks, Malik Beasley, Jarred Vanderbilt and rookie Walker Kessler.

Now the starting center for Minnesota, Gobert will be on the opposing side in the place where he developed into a three-time Defensive Player of the Year.

Rudy Gobert is averaging 13.3 points and 11.9 rebounds for the Timberwolves this season

‘There’s probably going to be a lot of emotions, but I just want to enjoy the moment and get a win,’ he told ESPN.

‘I spent nine years of my life there and created a lot of memories, have a lot of very powerful relationships with people that I love and gave me a lot of love over the years.

Much of Gobert’s time in Utah was spent towards the top of the Western Conference standings, as the team made the postseason his last six years there and finished as the first seed in 2020-21.

But Gobert and the Jazz never made it past the second round of the playoffs, as the pairing of him and Donovan Mitchell consistently fell short.

The two reportedly had an at times frosty relationship, with one article from The Athletic in 2020 citing a source who said the situation ‘doesn’t appear salvageable.’ 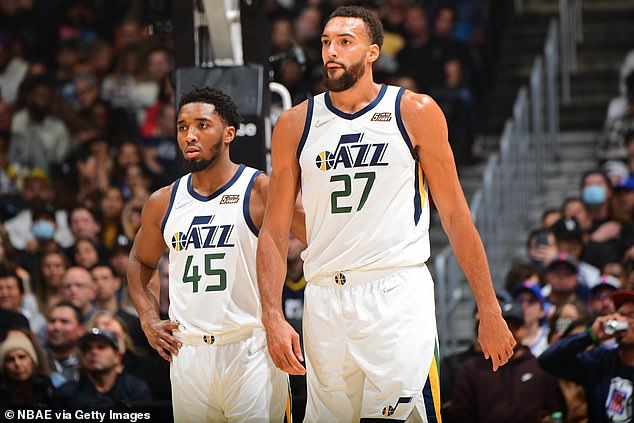 Mitchell is now thriving with the Cleveland Cavaliers – third in the Eastern Conference – while Gobert and Minnesota are currently 11th in the West with a 12-12 record.

And while Gobert will be focused on getting a win on Friday, it will surely be hard for him to ignore the significance of the matchup.

‘Now, I’m in another place, but it doesn’t change the human side of it. When I say that, I think it’s bigger than just basketball. I gave my soul to this team, this city, this organization, my blood, sweat and tears, [and] there are some things that go beyond the business of basketball.

‘That’s why I [thought] we’d be here forever. Now, I’m in a new place with the opportunity to accomplish great things, and I’m always going to be grateful for those nine years in Utah.’