Ruffer’s 500% bitcoin gain: Know when to hodl em, know when to fold em

Many bitcoin investors may wish they’d heeded Kenny Rogers’ famous lyrics from The Gambler at Easter.

For the first four months or so of the year, the leading cryptocurrency could do no wrong, but it has been a very different story since bitcoin hit a peak of $64,829, according to Coindesk, in mid-April.

This week, bitcoin briefly dipped below $30,000 again for the second time in a month – painful watching for anyone who mentally banked gains in April and now finds themselves roughly 50 per cent down.

‘You’ve got to know when to hold ‘em, know when to fold ‘em’: Bitcoin investors may wish they’d heeded the famous lyrics from Kenny Roger’s song The Gambler

It should be noted, as I have previously here, that bitcoin investors are a diverse bunch and many do not necessarily have the same attitude to risk and reward as traditional investors – and can more happily stomach high octane movements in the per centprice.

Hodl: No, that headline’s not a typo

Hodl is a commonly-used term in cryptocurrency investing circles and originated as a mis-type of hold that became a meme.

It was reverse engineered as an acronym for hold on for dear life.

So, for anyone thinking it might be, no that headline’s not a typo.

Some will be the true believers, backing bitcoin as the future and claiming that they are thinking ten or 20 years out and not about what’s happened since we rang in 2021.

A more sizeable chunk (and cross section) are longer-term bitcoin holders, who may be nursing a headache from its fall but are considerably up on their initial investment, having bought in below $10,000.

Nonetheless, it’s never fun to look at a chart with the rose-tinted spectacles of hindsight and think: ‘Yep, it was blindingly obvious this was ripe for a fall, I should have taken some profits.’

So, the latest annual report from investment trust Ruffer will be awkward reading for many bitcoin investors – even those still sitting on paper profits in the multiples.

This trust, which describes itself as all-weather, can invest in pretty much anything it wants and hit the headlines at the tail end of last year when it emerged that it had taken a hefty bitcoin position.

In perhaps the smartest, or luckiest, piece of bold active management of recent times, Ruffer bought bitcoin and some bitcoin proxies in November when the cryptocurrency was trading below $10,000.

It sold half that in January after it had rocketed to $30,000, and then cashed in completely in April near the peak, racking up a 500 per cent-plus gain. 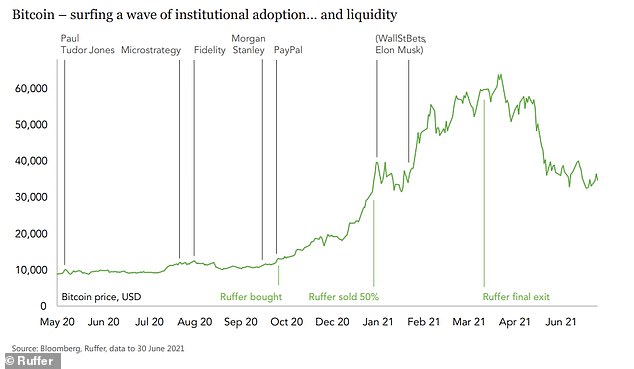 Ruffer’s investment manager’s report featured this chart mapping out bitcoin’s rise and fall, the major high-profile events for the cryptocurrency and where it bought and sold

Other than us saying ‘lucky gits’, this prompted some amusement in discussion in the This is Money offices, as Ruffer’s initial investment rationale was bitcoin’s long-term prospects for adoption by the financial and institutional mainstream and emergence as digital gold.

So, in an investment world where we are regularly advised to think long-term, what’s going on with this bit of short-term trading?

Ruffer’s Investment Manager’s Year End Review lays it out. It said: ‘The rationale was that bitcoin was an emerging store of value and institutional investors would move to adopt it as a “digital gold”. This narrative played out faster than we could have foreseen as show in the chart below.

‘In the short term at least, bitcoin was exhibiting the characteristics of a risky, speculative asset and therefore no longer fulfilled the portfolio role we had intended for it as a protective and diversifying asset. We sold all our exposure in April (+515bps performance contribution).

‘Our Chief Investment Officer, Henry Maxey, surmised that excess liquidity has a wonderful way of bringing the hopes of the future into the prices of the present.’

That last bit is perhaps the key lesson for investors, whether they have an interest in bitcoin or couldn’t care less about cryptocurrencies.

Just as debt involves borrowing from the future, in the sense that you take money now in return for paying it and more back later, a huge wave of cheap money sloshing about can borrow investment returns from months or years to come.

When money floods into markets, as it did with lockdown crash-fighting rate cuts, quantitative easing, and other stimulus measures, players are less concerned about carefully considering where it’s going and more likely to pay up for what’s going up.

There have been some spectacular momentum trades in the rebound from the coronavirus crash: the most high-profile have been bitcoin, Tesla, and the Faang stocks, but other shares have raced to the moon too.

Some of the rise will be justified, but you can be sure that for many the price today has borrowed a bit of the hope that would have justified gains in the future.