Rugby legend Jonny Wilkinson reveals how he is healthier than ever

For rugby legend Jonny Wilkinson, his epic battle with injury is almost as famous as his breathtaking performance that led England to Rugby World Cup victory in 2003.

Dogged by dozens of setbacks, there were times when he spent more time off the pitch during his professional playing days than on it.

Just weeks after propelling England to glory, he sustained a serious shoulder injury that was the start of an endless spiral of rehab and relentless frustration to get back out on the pitch.

It was a dark time for the former fly-half, who has spoken openly about battling depression during the period.

‘It wasn’t just my body that was falling apart– my mental health was really suffering too and I was regularly taking sleeping pills,’ he told MailOnline.

Now, four years after retiring from professional rugby, he says that in many ways, he’s in better shape today than when he was kicking match-winning goals for England.

‘As you get older, your body doesn’t necessarily have to get worse,’ says the 38-year-old.

‘But you do have to understand how to listen to it, and work with it.’

Today, Jonny is quick to admit that he was often to blame for his horrific catalogue of injuries, due to his ‘obsession’ with training and getting back on the pitch.

Over the years until his retirement in 2014, he battled damage to his knees, neck, shoulders and even, eye-wateringly, lacerated a kidney during one particularly brutal clash.

‘My injuries were treated brilliantly by medical professionals at the time – it was often me that was the problem,’ he says.

‘I put people under so much pressure because I was obsessed with being on the pitch.

‘In my opinion, if I wasn’t on the rugby pitch, I was no one. 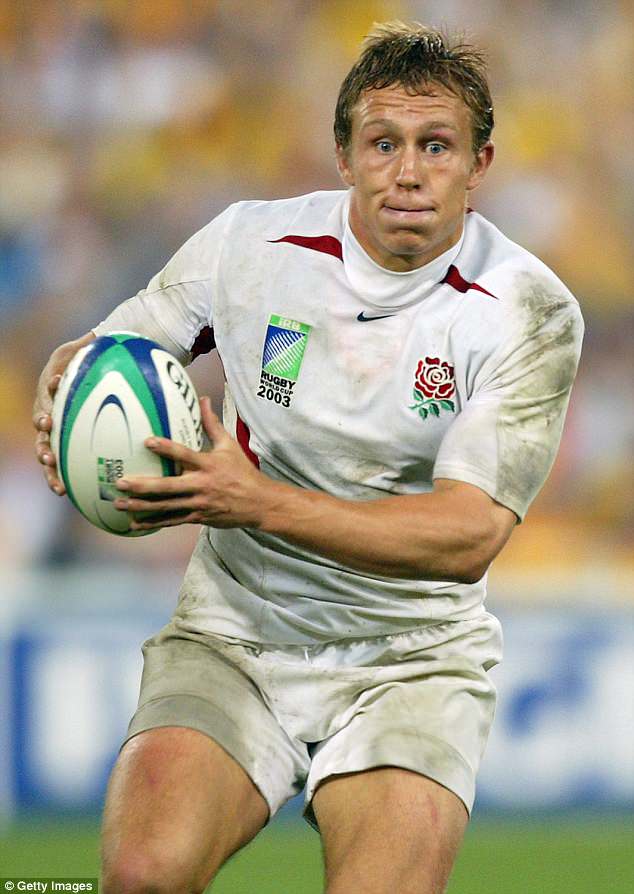 Dogged by dozens of setbacks, there were times when he spent more time off the pitch during his professional playing days than on it

‘Rehab to me was something to get out of the way – and physio exercises were a waste of time.’

Indeed, there were countless times when he flagrantly disregarded the amount of time medical experts said he needed to rest and recover for.

‘I’d be told not to do anything for one or two months and I’d be back on the bike the next day,’ he recalls.

WHAT ARE THE DANGERS OF SLEEPING PILLS?

If you rely on sleeping pills to help you snooze, you should probably stop, it was reported last June.

The tablets designed to help us drift off pose the same threat as smoking a packet of cigarettes each day, an expert claimed.

A worrying body of evidence is emerging over their dangers, with growing links to cancer, debilitating falls and even heart attacks.

This brief stint of physical activity helps to burn you out, aiding you in your quest to fall asleep naturally, he said.

Researchers have long argued the need for safe treatments for insomnia due to the risks it poses, including heightened threat of stroke and heart attacks.

Even after his major kidney injury, he was told he’d need to rest for at least three weeks.

‘I couldn’t sleep properly, I ended up pushing myself to the limit and smashed myself so many times. Some of those decisions cost me months of playing – I suffered 15 injuries one after the other.

‘It all seems so ludicrous now. But at the time I thought it was I was a hero for getting back out there again, no matter what.’

‘NOW I LISTEN TO MY BODY’

Today, however, Jonny is a different man. ‘I’m ultimately much more at ease with life,’ he says. ‘I also have no aches and pains and my health is through the roof. ‘

The key to his transformation, he says, is listening to his body – and embracing natural approaches to good health, such as using scientifically-proven essential oils rather than painkillers.

‘Before, everything was about the quick fix,’ says Jonny. ‘I needed my injuries sorted now – regardless of what the long-term effects might be. Anything to get me back on the pitch for the following Saturday.

‘When I was playing, I saw my body as a tool that I needed to do something for me.

‘Now I know that the human body is most powerful when you listen to it, and work with it.’

‘I’m actually in total awe of it – it’s so powerful and intelligent. By this, I mean it’s constantly giving you messages, speaking to you – telling you that you need rest, sleep, to move.

‘The key is whether you are open to hearing these messages– and for many years, I wasn’t.’ 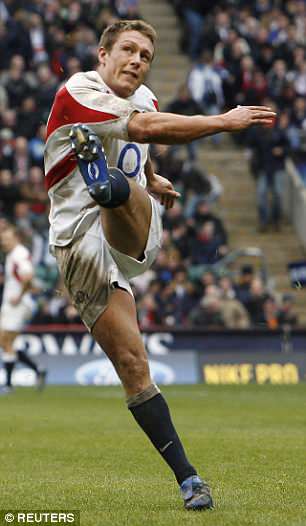 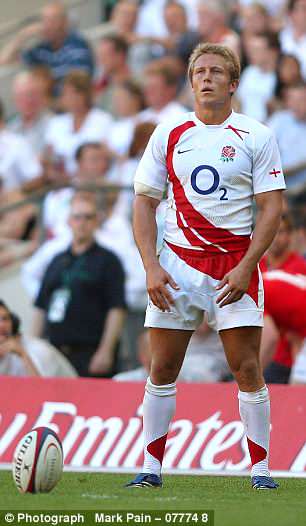 Just weeks after propelling England to glory at the 2003 Rugby World Cup, he sustained a serious shoulder injury that was the start of an endless spiral of rehab and relentless frustration to get back out on the pitch

Looking back, he says his body was crying out for rest.

‘It was constantly telling me I needed to give it time to recover but I just kept on going – spiraling in the wrong direction.

‘I’d think “I just need to keep on going to the end of the season” – until I had four weeks off.

‘We always used to say the first pre-season game was the only game where everyone was 100 per cent fit. As soon as you play your first game you start carrying something, or managing something.

‘I didn’t realise how powerful that cycle was.

‘But looking back, I was doing the best I could at the time, with the knowledge I had.’

THE DANGERS OF ‘QUICK-FIX’ MEDICINE

While his experience was in professional sport, Jonny believes many of us fall into that ‘quick-fix’ cycle.

‘With a medicine such as sleeping pills – or another one in my case was decongestant nasal spray, for example – you get that “I’ll just take it for one more day” attitude.

‘You take it the first time and it works. So you take it again the next night to keep clearing the problem. Then you get the “well it worked last night so I’d better take it tonight or I won’t sleep” thought. 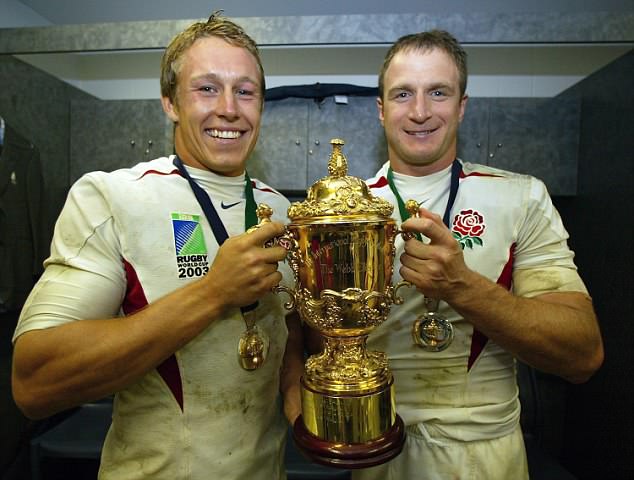 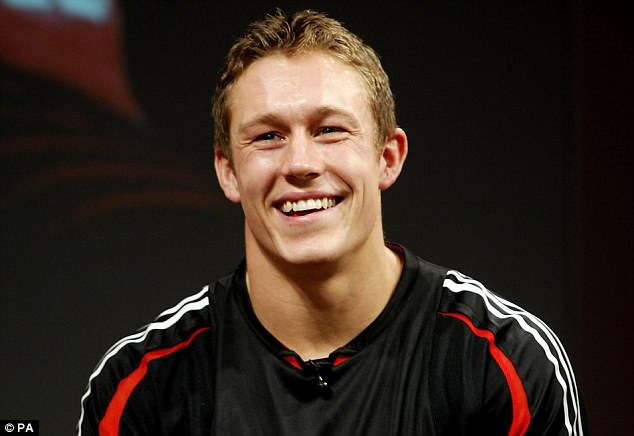 While his experience was in professional sport, Jonny believes many of us fall into that ‘quick-fix’ cycle. ‘It becomes a hard cycle to break,’ he says

‘It becomes a hard cycle to break – you rely on these things because they become convenient for your body.’

Part of his renewed outlook on life has been putting his health first, rather than fitness.

IS THERE ANY PROOF JONNY WILKINSON’S ESSENTIAL OIL PRODUCTS WORK?

A clinical trial, reviewing muscular pain and the benefits of the Puressentiel Muscles & Joints Roller, published in the French journal Cahier d’aromathérapie, found that 98 per cent of patients showed an immediate reduction in pain.

In addition, at the end of the four weeks, the average overall score for the improvement of pain was 70 per cent, while muscle spasms had reduced on average by 86 per cent and muscle relaxation improved by 70 per cent.

And research also shows that massage via mechanical pressure – using the rollerball in the Puresssentiel range – helps to increase joint motion and reduce stiffness. A study in the journal Physical Therapy in Sport reported that the use of massage via an application format such as a roller, gel or balm helps in the relief of symptoms and signs of exercise-induced muscle damage.

‘When I was in the middle of playing, my main goal in life was fitness – and I tried to squeeze a bit of health into that.

‘Now my focus is health and I don’t have to squeeze anything in. Fitness blooms from that. It doesn’t matter what everybody else is doing – it doesn’t matter if you’re the slimmest, have the biggest muscles. It’s about if your body’s in harmony.’

Today, Jonny goes to the gym for an hour “although I do really go for it when I’m there”, he admits.

‘Or, I go for a walk – I definitely have to do some kind of movement or activity every day.’

And despite his horrific catalogue of injuries, he says he has surprisingly few ‘hangover’ injuries from that period.

‘I feel I should carry some memory of the damage – especially in my left knee, which had to be totally reconstructed – but I don’t.

‘The only thing I have lost is a tiny range of movement in that area; I can’t bring my heel up to my backside, but that’s it.’

‘Yes, if I really go for it in the gym I will feel it a day or two later, but that’s cause and effect.’

And today, he no longer relies on quick-fix medications or battles on stoically if he’s in pain.

Instead, he uses a range of clinically proven essential oil-based products from Puressentiel, including a pain-relieving balm, gel and heat patches – and has become a total convert to this form of treatments.

Jonny readily admits he was incredibly sceptical when first introduced to the products while playing for the French club Toulon. 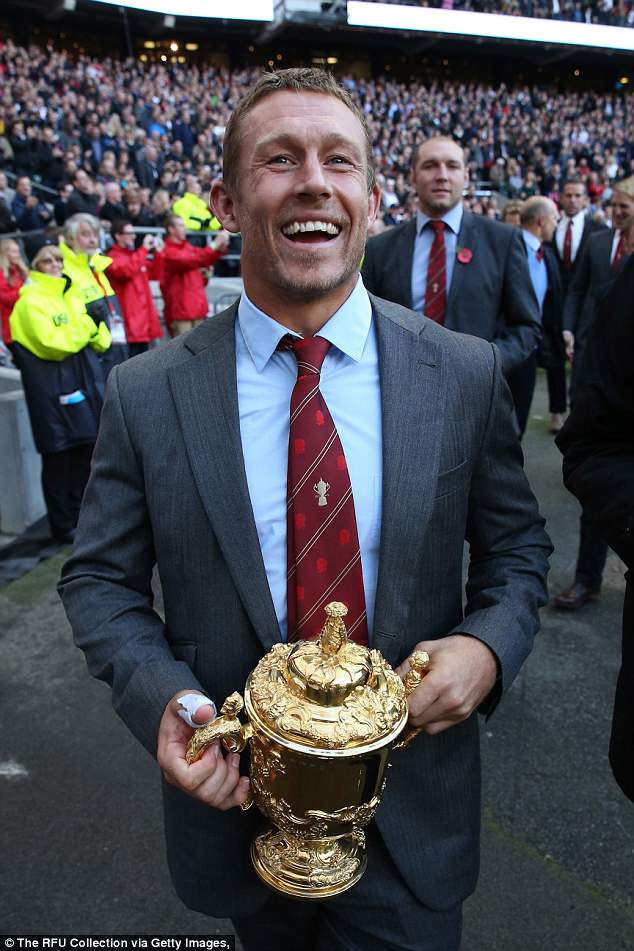 And today, he no longer relies on quick-fix medications or battles on stoically if he’s in pain. Instead, he uses a range of clinically proven essential oil-based products from Puressentiel (pictured carrying the 2003 Rugby World Cup trophy in November 2013)

‘Many of the medics and physiotherapists in France use essential-oil based therapies to support muscle health and ease injuries – and they wanted to use them on me,’ he says.

‘This wasn’t a world I was familiar with so yes, as you can imagine, I wasn’t very convinced.

‘As usual, I wanted immediate relief – but to be fair, I did get it. These oils are potent and over time, I started to have fewer and fewer issues. After a while, I started to forget how bad I had been.’

Intrigued, and with his playing days behind him, he began to take more of an interest in natural health.

‘I learned that many of the products contain 14 essential oils – and, to my surprise, there is a lot of evidence to back up their use.

‘That was the key for me: I am a sucker for evidence and I would only back something if I really believed in it.’

Jonny adds: ‘I really believe that essential oils are a good alternative for those who prefer natural remedies or don’t like pill-popping for common health woes like minor muscle and joint injuries.

‘Many people these days don’t want to take painkillers due to the side effects such as such stomach, liver and kidney problems.

‘The essential oils I use, on the other hand, have been scientifically proven to help heal the problem while reducing pain and inflammation – without these side effects.

‘Now if ever I have a niggle, I use the products, and am always amazed by how something “natural” can be so effective.’

Jonny Wilkinson is an ambassador for the Muscles & Joints range from Puressentiel.