A rugby player who sued the male model opponent who injured him in a match has lost his £500,000 damages claim after being told serious injury is ‘a part of the sport’.

Full-back Dominic Fry, 26, lost his spleen after he was flattened by Ryan Ball, 26, during a match in Hove, Sussex, in October 2013.

He claimed that his opponent – who is now a male model – ‘recklessly jumped into’ him when he had no chance of winning the ball.

Mr Fry launched an unusual legal claim, insisting Mr Ball and his club, Hove RFC, should fork out £500,000 in compensation.

But he lost the case today when Judge Jeremy Freedman found that Mr Ball had simply mistimed an attempt to charge down Mr Fry’s kick.

‘His minor error of judgment in slightly mistiming the attempt to charge down the ball cannot conceivably found a claim in negligence,’ he said.

‘The reality is that the risk of physical injury in a fast-moving competitive contact sport is both inevitable and unavoidable.

‘The mere fact that serious injury has befallen a player does not mean that another player should be held liable.

‘Such injuries do occur and occur frequently without any fault or negligence on the part of others.’ 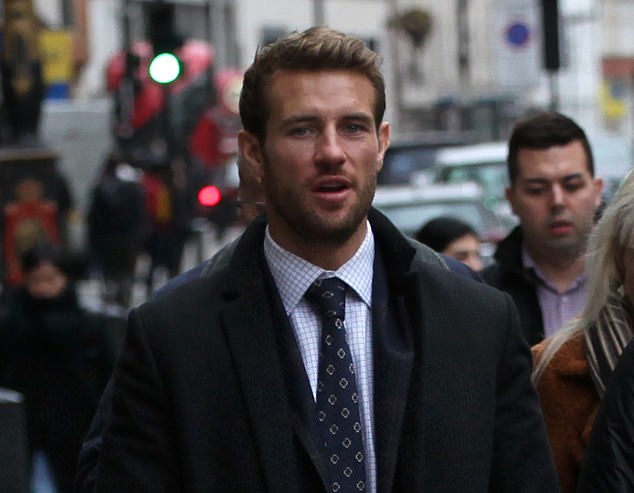 Ryan Ball clattered into Mr Fry during a match between Haywards Heath and Hove, but a judge found he could not be found liable for the injury caused

In his evidence, former Haywards Heath RFC full-back Mr Fry said the match at Hove was an ‘intensely competitive’ local derby, but played without bad blood.

He had just gathered a ball and kicked it downfield, aiming for touch, when his opponent ‘recklessly’ crashed into him, he claimed.

‘I remember glancing down to just see Mr Ball flying through the air, leading with his knee and elbow,’ claimed Mr Fry. ‘That is the last thing I saw before the impact.’

The impact ruptured his spleen and he had to be taken to hospital in Brighton by ambulance to have it removed.

Mr Ball was given a yellow card and sent to the sin bin for the incident, but he and Hove RFC denied that he led with his elbows or knee.

Local newspaper reports state that Mr Ball scored a hat-trick of tries as he team won the London One South league match 43-24.

The court heard Mr Fry is now at increased risk of infections, meaning he has to stay away from parts of the world where diseases like malaria and dengue fever are prevalent. 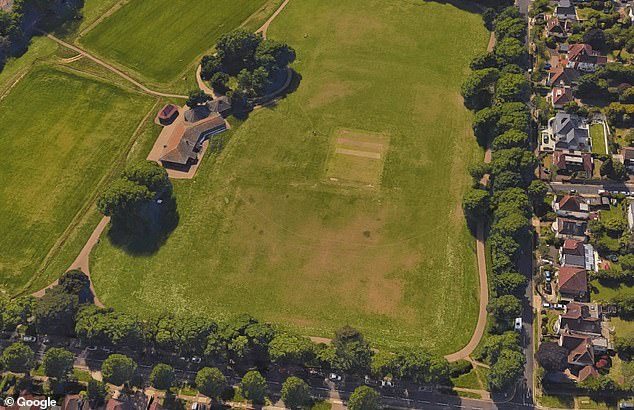 The incident happened during a match at Hove RFC, based in this park in the Sussex town

Mr Fry told the court he had hoped to emigrate to Canada to work as a personal trainer, but that the ambition was ruined by the injury.

It was simply an accident which occurred during a ‘reasonable attempt to charge down the ball’, said

His barrister Jonathan Bellamy told the High Court: ‘The contact between the players was not off-the-ball or outside the course of play, for example a punch or a trip.

‘It was caused by Newton’s laws of motion applied to two fast-moving bodies; when one is trying to kick a ball and the other is trying to charge it down.’

Judge Freedman found that Mr Ball made a genuine attempt to charge down the ball and there was ‘nothing he could do’ to avoid impact once the ball had gone.

‘I reject out of hand the suggestion that he was acting in any way maliciously, was intending to cause injury or acting in an unsportsmanlike manner,’ he said.

The claim was dismissed and an order made that Mr Fry is liable for the other side’s lawyers bills, but Mr Bellamy said the order would not be enforced.

Judge Freedman added: ‘Mr Fry is deserving of much sympathy, but he will understand that a claim such as this cannot be decided on the grounds of sympathy. Legal principles must be applied and that is what I have endeavoured to do.’