A ‘disgusting’ rugby player, who allegedly sexually harassed a female cabin crew member, caused a 90-minute delay on a flight after the aircraft was forced to return to the airport.

The Belfast-bound easyJet flight was originally due to take off from Bristol Airport at 12.55pm on Friday but was delayed for hours after a group of rowdy rugby players caused chaos onboard the flight and led to police having to intervene.

Following the incident, passengers said they were ‘intimidated’ and ‘sickened’ by the ‘raucous’ group – one of whom was escorted off by police for sexually harassing a member of staff. 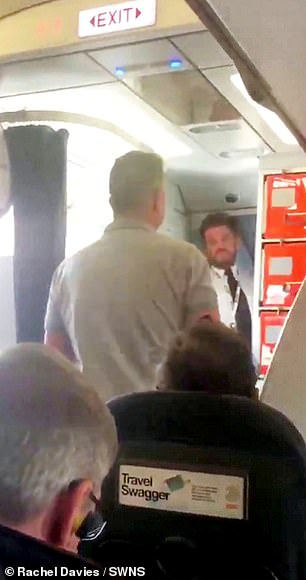 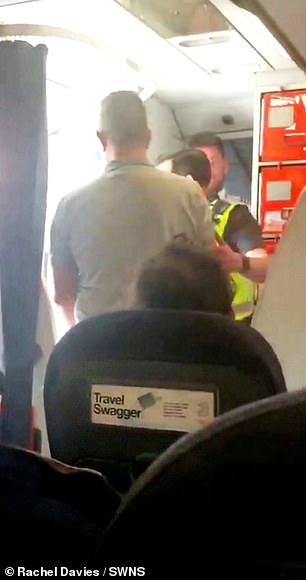 The man, who was part of a group of rugby players, is escorted off the plan by a police officer

Holidaymakers boarded the plane at 1.10pm, following a slight delay at the gate, but the flight did not depart from Bristol until 3.15pm, after the aircraft was made to return back to the airport to allow police to board.

According to passengers, the ‘dreadful’ incident occurred after cabin crew completed their routine safety demonstration.

During the footage, the man alleged to have sexually harassed the flight attendant, was seen being escorted off the aircraft by police.

Passenger Rachel Davies, 40, Wales, said: ‘It was horrible, it was really dreadful.

‘Some of them had definitely had a few drinks. They were being so loud you couldn’t hear yourself speak.

‘I just had a feeling that something was going to happen on the flight so, as I had priority boarding, I alerted the cabin crew when I got on the flight.’

The passenger went on to describe how one man in the group got out of his seat to speak to female members of staff. 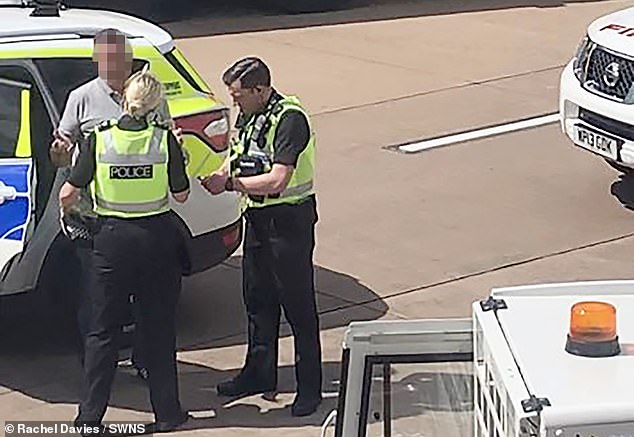 The rugby player speaks to police officers after being taken off the plane in Bristol. According to passengers, the man got out of his seat when passengers were supposed to have their seatbelts on

She said: ‘One of the men got out of his seat, when we were all supposed to have our seatbelts on, and walked down the aisle towards two female members of staff.

‘I couldn’t hear what he said to them, but one of the women said ”I am treating this as sexual harassment”.

‘Then an announcement came over saying that something had happened on board, and the plane would have to return to its parking bay and wait for police.’

Ms Davies added: ‘As police escorted him off, the lady in the cabin crew was in floods of tears, and was saying that she didn’t feel safe on that flight.

‘It was quite intimidating. One of his friends left the flight with him, for support, and then we set off.

‘What sickened me most was that, after we got off the flight, as we were waiting for the carousel to get our bags, all the other men in the group burst into laughter. 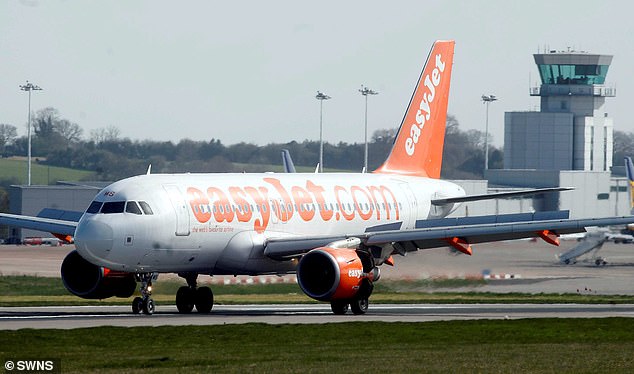 ‘They were saying things like she was only looking for a bit of compensation, and that they’d said worse things to their mothers.

‘It was just dreadful. You’d think people would be a bit more careful.’

While Ms Davies praised easyJet’s ‘zero tolerance’ approach towards the man’s behaviour, she believes Bristol Airport should have done more to stop the men boarding the flight.

She said: ‘One man was slurring his words as he spoke. They should have been curbed at the gate, before they were allowed to board the flight.’

A spokesperson for Bristol Airport said: ‘We want all passengers flying from Bristol Airport to have an enjoyable start to their journey, but anti-social behaviour by a minority can spoil the experience for everyone.

‘Any anti-social behaviour by a passenger is not accepted by the Airport or airlines, and could result in passengers being refused travel. We will assist the police with their investigations.

‘Disruptive behaviour on-board an aircraft is illegal and the worst cases can result in fines, travel bans and custodial sentences.’

An easyJet spokesperson apologised for any inconvenience caused.

He said: ‘easyJet’s cabin crew are trained to assess and evaluate all situations and to act quickly and appropriately, to ensure that the safety of the flight and other passengers is not compromised at any time.

‘Whilst such incidents are rare we take them very seriously, do not tolerate abusive or threatening behaviour onboard.

‘We would like to apologise to passengers for the delay and thank them for their understanding.

‘The safety and wellbeing of passengers and crew is always easyJet’s priority.’