Drag queens are to appear in a Super Bowl commercial for the very first time this Sunday.

Kim Chi and Miz Cracker who appeared on RuPaul’s Drag Race will end up making history when they appear in an advert for Sabra hummus on February 2 when the Kansas City Chiefs take on the San Francisco 49ers.

In a teaser for the advert which the company posted onto its YouTube channel last week, Miz Cracker attempts to put on a football helmet over one of her huge wigs.

‘I hope this doesn’t give me helmet hair,’ she says, while Kim Chi watches.

Her partner in the advert is 32-year-old Kim Chi, the first South Korean-American contestant on the show who made all the way to the finale of season 8.

‘For queer audiences, it is an art form and an ‘outsiders’ language,’ Bob Witeck, a marketing strategist who specializes in reaching LGBTQ audiences, said of the decision to use drag queen who said the idea was ‘revolutionary’.

‘Reaching the Super Bowl means taking our language into every home in the nation and millions around the world,’ Witek said to NBC. 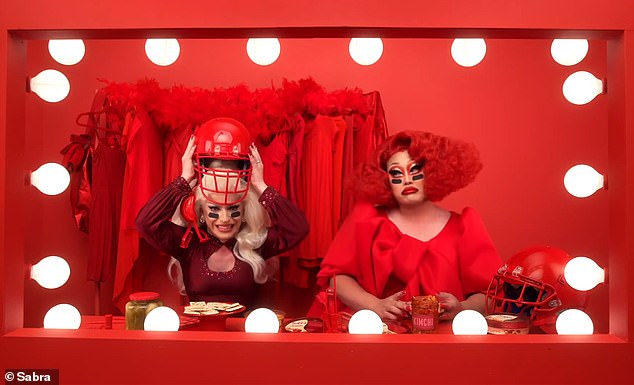 ‘The Super Bowl is the ultimate test, when you can take chances like this and realize that the fear of drag is nothing people imagined it to be,’ he said. ‘It’s us telling our own joke about ourselves, with a sense of humor and authenticity … with luck, everyone laughs with us.’

It’s thought the ad could be seen by as many as 100 million viewers during the Super Bowl.

‘Ten years ago if you would have said there would be a queer artist of color in a Super Bowl ad you would have laughed at it,’ Kim Chi said to AdAge.

‘Growing up for me there weren’t many Asian representations in pop culture and gay role models were extremely, extremely rare,’ the South Korean-American drag artist said. ‘For me, to be that for an Asian kid growing up gay in a small town watching football with their family, that’s incredibly exciting.’ 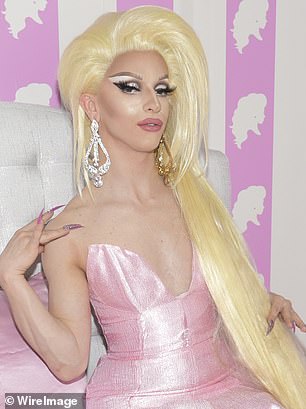 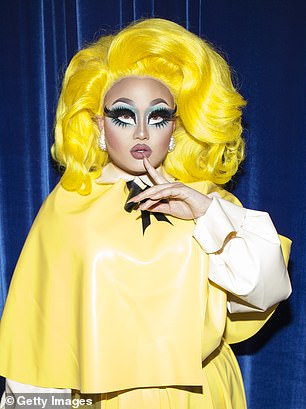 Miz Cracker, 35, left, is a New York-based queen who appeared on the 10th season of RuPaul’s Drag Race in 2018, while her partner, 32-year-old Kim Chi, right, is the first South Korean-American contestant on the show who made all the way to the finale of season 8

Witek also believes its inclusion suggests that there has been a change in the way the public perceives drag queen and that the success of reality show RuPaul’s Drag Race has helped to normalize the idea, bringing it into the mainstream.

‘Hummus is for everyone and pairs well with nearly every food you eat,’ Jason Levine, Sabra’s chief marketing officer, said in a statement.

‘Whatever your passion, however you live, love, eat and enjoy life, this plant-based food is a winner. We’re bringing a diverse group of personalities to the table and demonstrating just how incredibly versatile, relevant and relatable hummus is today. We think we’ve got something for everyone.

Various other LGBTQ celebrities are set to be featured in ads due to air during the Super Bowl including Queer Eye’s Jonathan Van Ness for Kellogg’s Pop-Tarts, talk show host Lilly Singh for Olay, Lil Nas X for Doritos, and Ellen DeGeneres for Amazon Alexa with her wife Portia de Rossi.

A 30-second Super Bowl spot this year costs as much as $5.6 million.

The Super Bowl takes place at the Hard Rock Stadium in Miami, Florida, where the Kansas City Chiefs will face the San Francisco 49ers,