Russell Brand has admitted he hasn’t spent more than 24 hours looking after his two small children and leaves a large part of parenting to his wife because he has a ‘romantic, reflective, religious world view’ and is too sensitive to change nappies.

Brand admitted that he had never looked after his daughters, Mabel, two, and Peggy, six months, for more than a day because wife Laura Gallacher is better suited to the role and said he focuses more on his daughter’s ‘beauty and grace’,

‘She wouldn’t go away for 24 hours, Laura,’ Brand said of his wife in an interview with the Sunday Times. ‘She respects and cares for their safety too much. Yes, I’m very, very focused on the mystical connotations of Mabel’s beauty and grace. Not so good on the nappies and making sure that they eat food,’ he added.

Russell Brand, seen last October, has praised the #MeToo movement, but admitted he has no regrets about his Lothario past, as he leaves his wild days behind him and embraces his new life in a quite Oxford village

The Essex-born Lothario, who previously bragged about bedding five women a day, said:  ‘When I looked after Mabel on her own, she dropped two social classes in an hour. In no time at all we’re in a coffee shop, she’s just got a nappy on and she’s covered in stuff because I’m not willing to fight any of the battles.

‘Laura’s able to sustain and maintain domesticity in a way that’s astonishing. I didn’t have much experience of how to organise domesticity. I do whatever I’m told.’

He added: ‘Laura does all of it. It turns out that she is extremely well versed in the nuances and complexities of child-rearing. Me, I am dedicated to it, devoted to it, but I am still surprised when it’s like ‘Oh my God this is f****** really hard and it’s so exhausting.’ 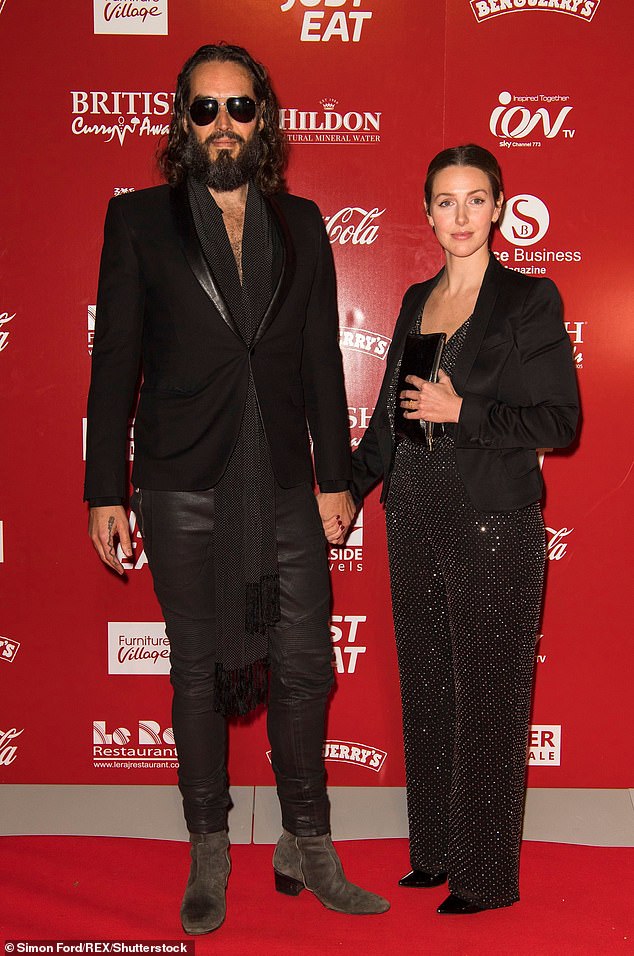 The former MTV presenter admits a voice in his head helps him avoid cheating on wife of two years Laura Gallacher, seen right in London in November

Elsewhere in the interview, Brand has praised the #MeToo movement, but admitted he has no regrets about his Lothario past.

He shunned the limelight three years ago and now lives a quiet life in Oxford but admits he still has moments of sexual temptation.

The former MTV presenter spoke about how his transformation from wild child to a yoga-loving spiritual has helped him maintain his calm new lifestyle in a quiet Oxfordshire village.

And when he does get tempted by someone ‘attractive’, Russell, who married presenter Kirsty Gallacher’s 31-year-old sister Laura in 2017, says a voice in his head tells him not to ‘risk ruining his whole life’.

At height of his fame Russell reportedly had sex with up to five women a day before going to sex rehab.

Speaking in 2010, shortly after his wedding to ex wife Katy Perry, he admitted of his single days: ‘I was having sex with different women three, four, five times a day. In Ireland, nine in one evening.’

But speaking in the frank interview this weekend, he praised the #MeToo movement, adding: ‘No [I don’t regret my past]. I just feel it [the movement] is a really positive change. It’s a sign of real awakening’.

And talking about his own shift in attitude towards sex and marriage, he added: ‘When I think ‘oh that person is attractive’, the next thought is ‘yes but if you ever did anything, you realise it would destroy your whole life’. There’s that voice in my head now’. 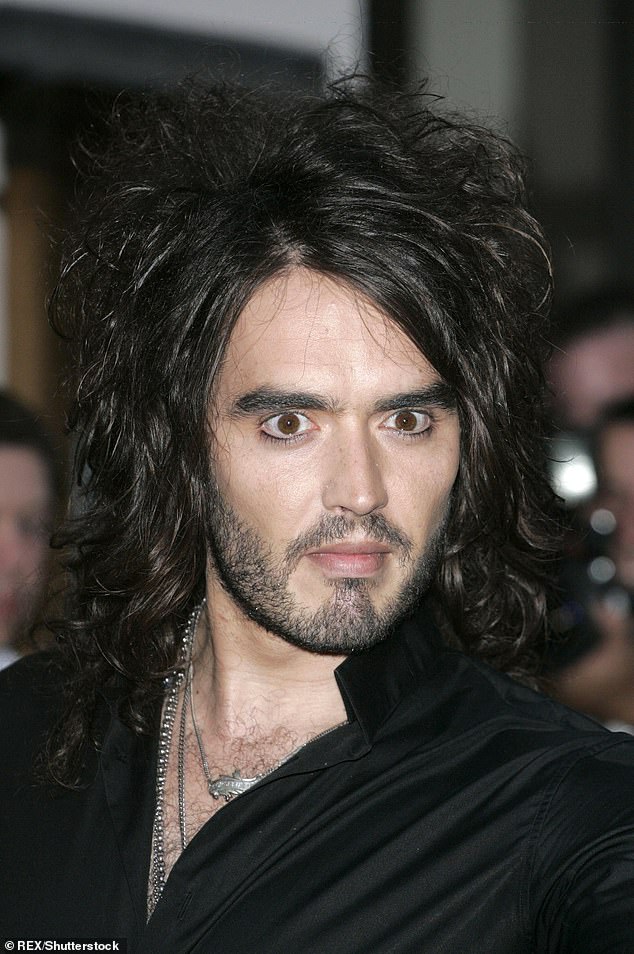 At height of his fame, Russell reportedly had sex with up to five women a day before going to sex rehab- and even boasted about bedding nine women in one evening in Ireland (seen in 2006)

Russell also admitted he had forgiven his father for taking him to a brothel at the age of 17 and paying for prostitutes to have sex with him, revealing:  ‘It’s not a cool thing to do with a young person. But I also understand it’.

And Russell admitted his new role as a parent had grounded him, but admitted that he has yet to spend more than 24 hours looking after Mabel, 2, and six-month-old Peggy alone. 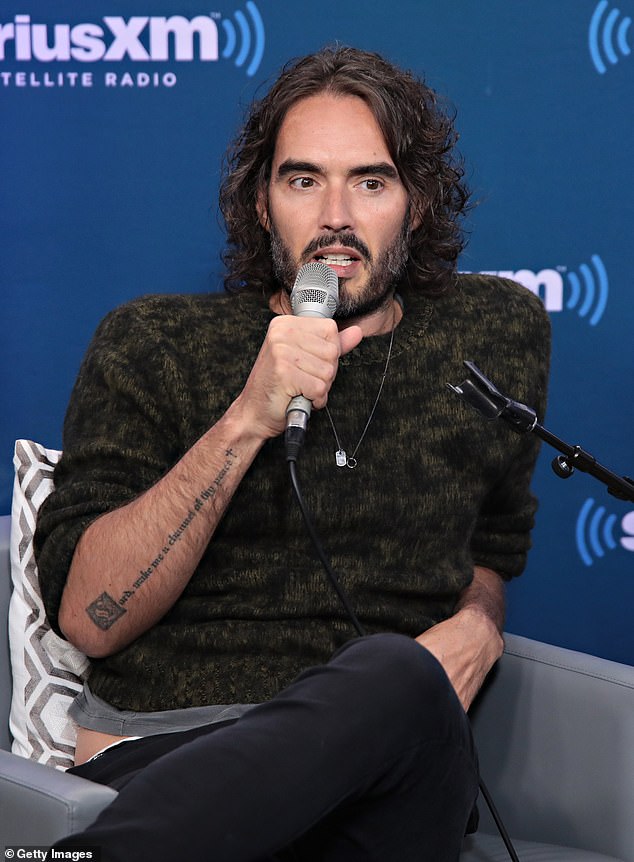 Speaking in the frank interview this weekend, he praised the #MeToo movement, adding: ‘No [I don’t regret my past]. I just feel it [the movement] is a really positive change. It’s a sign of real awakening’. (seen in 2017)

Revealing his protective side, he added of his daughters having playdates: ‘There is nothing playful about a playdate. It’s an unrestrained, unmanaged dangerous experiement that places my precious perfect girls in the company of anonymous, unvetted potential a***holes’.

Russell’s transformation comes after years of wild partying which saw him boast about his philandering ways.

In 2010 he appeared to have turned over a new leaf when he married popstar Katy Perry, but the pair divorced just two years later.

Shortly after their extravagant wedding in India, which saw 21 camels, elephants and horses reportedly form part of the wedding procession, Katy addressed his womanising ways.

‘He’s made no secret of what his life was like before me, but that’s then and this is the future,’ she said at the time.

‘He’s cheated in the past but he knows how good he has it with me and I know he’d never do anything to jeopardise that. I trust him 100 per cent.’ 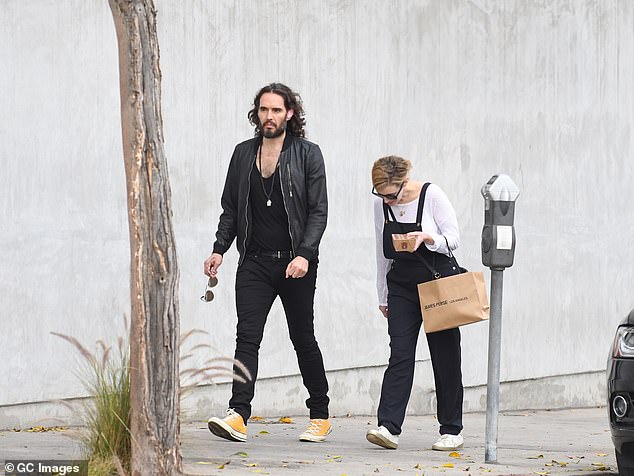 The Essex-born comedian, 43, shunned the limelight three years ago and now lives a quiet life in Oxford with his wife Laura Gallacher and their two young children (seen in California this month)