Some of the 20 women who have accused Hip Hop mogul Russell Simmons of serious sexual assault embraced on stage Saturday after a documentary chronicling their allegations premiered at Sundance Film Festival.

The women, led by Drew Dixon, the former A&R exec who claims Simmons raped her at his apartment in 1995, hugged and cried together after the On the Record film received a standing ovation at the MARC Theatre in Park City, Utah.

The documentary was mired with controversy and a media firestorm well before its premiere after executive producer Oprah Winfrey suddenly pulled out of the project, citing ‘inconsistencies’ in Dixon’s story.  She later revealed Simmons had tried to put pressure on her.

It meant the film no longer had a distributor in Apple TV Plus.

DailyMail.com captured the emotional scenes in these exclusive photos.

An emotional Drew Dixon (right) is seen after the screening of On The Record at the Sundance film festival Park City, Utah Saturday 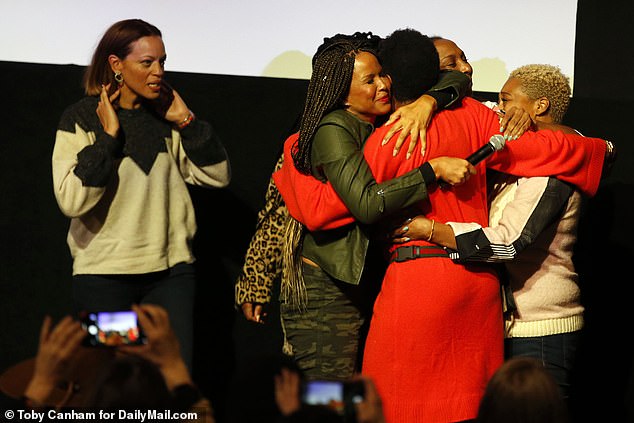 The film takes a look into the sexual abuse meted out by rap mogul Russell Simmons towards women who worked for him. Drew is joined on stage by her fellow survivors

Speaking to the audience Dixon said: ‘I’m relieved, I would say this has been like a gestation period and I don’t know whether it’s been two years or 22 years, but I feel like the baby has been born.

‘We are here, we have midwifed this baby into the world and it’s just the beginning.

‘We’re sort of scratching the surface of this conversation about sexual violence and harassment and power…and I hope we keep going.’

On the Record delves into the place black women have in the #MeToo movement and the racial dimensions of sexual assault. One audience member noted that the film, despite being about black women accusing a black man of rape, is directed by two white people.

‘A lot of this is about power and ecosystems of power,’ Dixon said. ‘And all of us have kept our stories to ourselves for decades, and there are people within that ecosystem who knew our stories.’

‘Some of those people are filmmakers,’ she continued. ‘It’s an entertainment industry story after all, right? But nobody told our story. Because the people who knew our story were subject to the same ecosystem. And to me, this is where allies matter. Allies who are not subject to that same dynamic. They have traction that they can use to pull you forward.’ 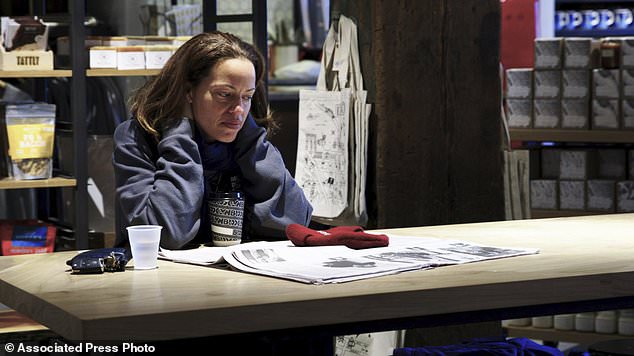 This undated photo provided by Chain Camera Pictures shows a scene from On the Record. Dixon says she tried to kill herself with 18 prescription sleeping pills after she was assaulted 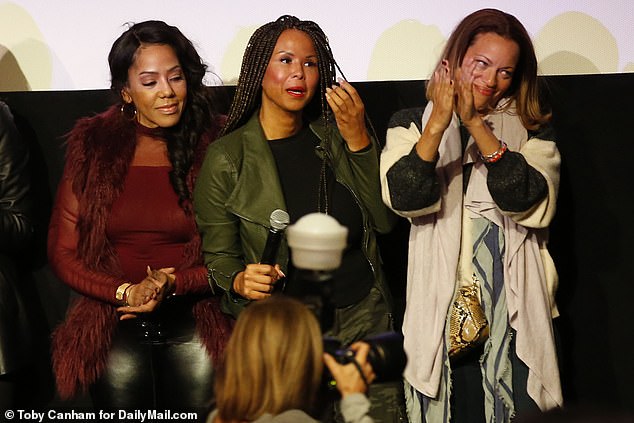 Fellow accuser, rap legend Sherri Hines (left), once part of the all-female hip-hop group Mercedes Ladies, said she was glad her story was finally listened to 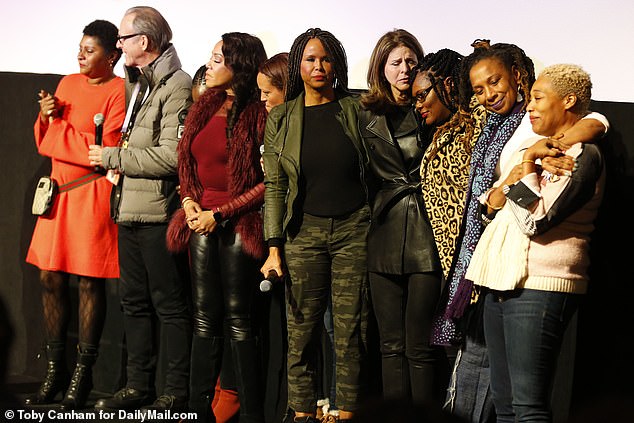 One audience member noted that the film, despite being about black women accusing a black man of rape, is directed by two white people, Amy Ziering and Kirby Dick

During a Q&A after the screening an audience member asked Dixon whether the fact the film’s two directors, Amy Ziering and Kirby Dick, are white was a reason the film hit troubled waters.

Ziering and Dick have made several documentaries before about sexual assault. Their The Hunting Ground focused on rape on college campuses. The Invisible War scrutinized sexual assault in the military.

Dixon cited deep divisions among African-Americans over the #MeToo movement. ‘They (the filmmakers) are not subject to the incoming (pressure) that even powerful black people are subject to,’ Dixon said.

‘To me this is why the filmmakers are white, because they don’t have the same vulnerability. Thank God.

‘Then they listened and then they deferred and they learned and centered us.’

Fellow accuser, rap legend Sherri Hines, once part of the all-female hip-hop group Mercedes Ladies, said she was glad her story was finally listened to.

‘To be standing today where somebody took the courage and believed in my story and for it to be heard 30-something years later and to stand here to say, you did not knock me, I am important and I’m still here surviving,’ she told the crowd. 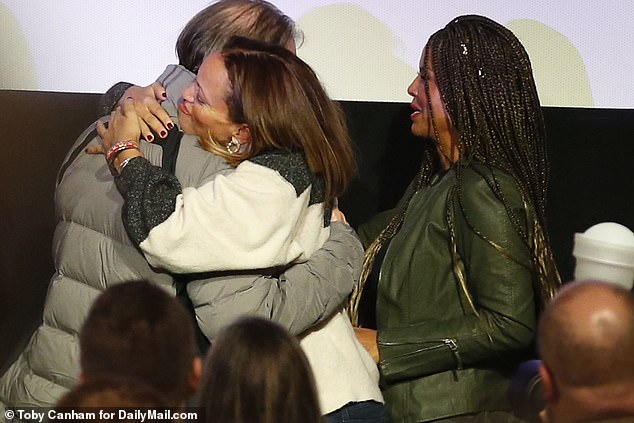 Dixon said: ‘To me this is why the filmmakers are white, because they don’t have the same vulnerability. Thank God’ 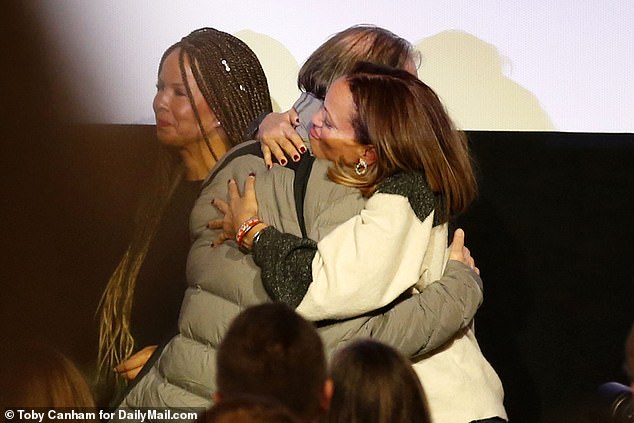 Dixon added about the filmmakers: ‘Then they listened and then they deferred and they learned and centered us’ 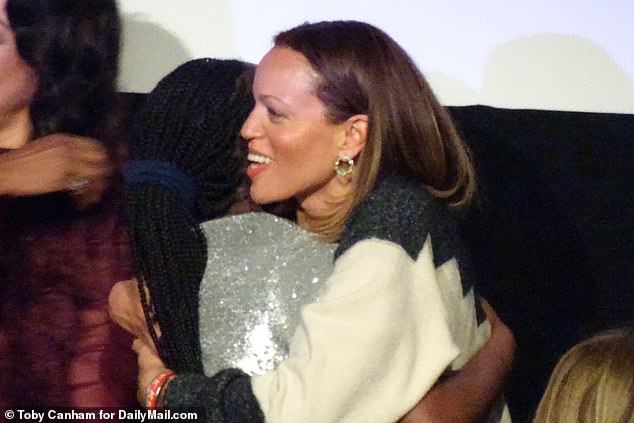 An emotional Drew Dixon is seen after the screening on ‘On The Record’ at the Sundance film festival Park City, Utah a look into the sexual abuse meted out by rap mogul Russell Simmons towards women who worked for him.Drew is joined on stage by her fellow survivors all victims of Simmons

Hines, who claims Simmons raped her at his New York office in the early 80s, was the first woman to make serious allegations against the hip hop mogul in a book she wrote.

But she claims her story initially fell on deaf ears, especially within the black community.

‘I had nobody from my hip hop community or from my black radio stations that wanted to come out with my story, they didn’t want to have anything to do with it,’ she said.

But she says that when people did to start taking notice it was white not black people who were approaching her.

‘I’m like, “I’m a legend in the game, y’don’t have my back?”, Hines continued. ‘So when Amy and Kirby and Drew brought me into this and said, “Hey you want to do this documentary?”, I’m like “hell yeh”.’

Journalist Sil Lai Abrams, a former model, who alleged Simmons raped her in 1994, added: ‘I just want to stress that this was a collaborative effort from day one with all the people involved. And any representation that wasn’t the case is not an accurate representation of this narrative, of this story.

‘And we are super proud to be here and grateful to everyone who gave us the power and ability to tell this story.’

The film is centered around former Def Jam A&R executive Dixon’s allegation of rape against Simmons during her two year stint at the company. 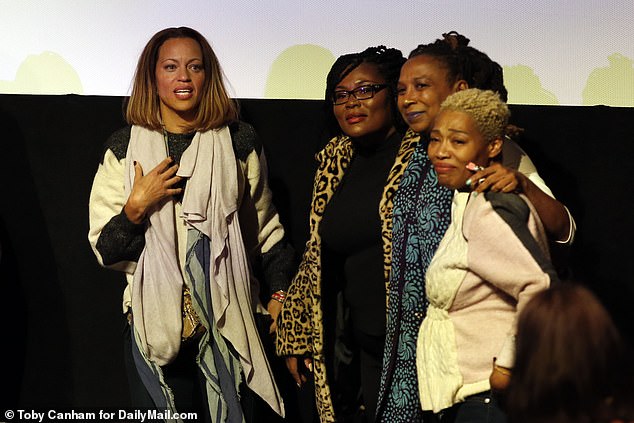 They were some of 20 women who have accused Simmons. He has denied the allegations 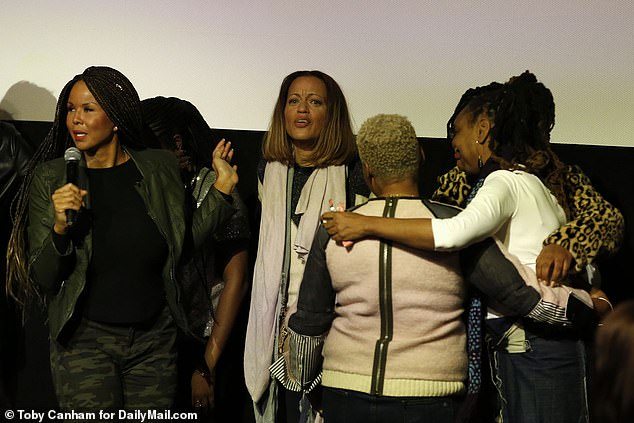 Journalist Sil Lai Abrams (left), a former model, who alleged Simmons raped her in 1994, added: ‘We are super proud to be here and grateful to everyone who gave us the power and ability to tell this story’ 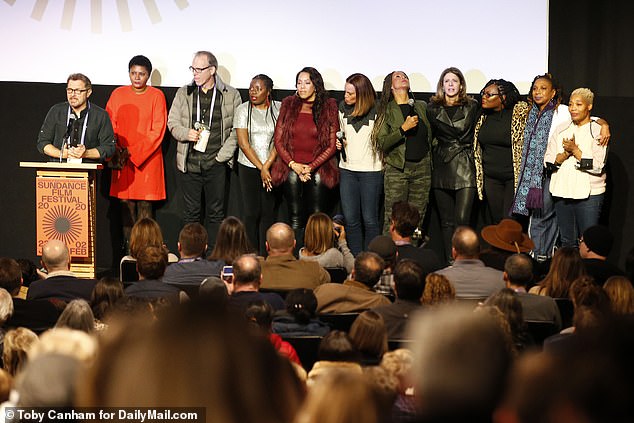 It focuses on how Dixon wrestled with the decision to bravely come forward and speak out about Simmons.

She finally decided to do so in 2017 when she went on the record in an interview with the New York Times.

What made her mind up was when she saw other women speaking out in the #MeToo movement and cited how Mike Tyson’s rape accuser Desiree Washington wasn’t believed when she spoke out.

Tyson was later convicted of raping the 18-year-old. ‘I couldn’t let them dangle in the wind,’ Dixon says in the film.

The doc went in to detail about what happened to Dixon that fateful night in 1995.

Then a 24-year-old music industry executive Dixon was flying high having recently assembled the chart-topping soundtrack for the hip-hop documentary The Show.

After a night with her boss Simmons at Manhattan’s Bowery Bar, she was about to get a taxi home when he offered to call her a car and suggested she wait in his apartment.

He enticed her in with the promise of listening to a hot demo CD. Once inside, Simmons sent Dixon to retrieve the demo from a player in his bedroom.

But when she did Simmons followed her in and she turned around to find him naked wearing a condom. Dixon remembers him pinning her down on his bed, talking with a ‘cold, menacing’ voice and raping her.

She then ‘blacked out,’ she says, and the next thing she recalls is waking up naked in his bath tub. ‘I was reduced to nothing in that moment,’ she said on the film, breaking down in tears. ‘I was trash.’

Dixon left the apartment, walking the 20 blocks back home, before taking a shower and sobbing uncontrollably on the floor.

She later resigned from Def Jam after just two years before joining Arista Records in 1996. 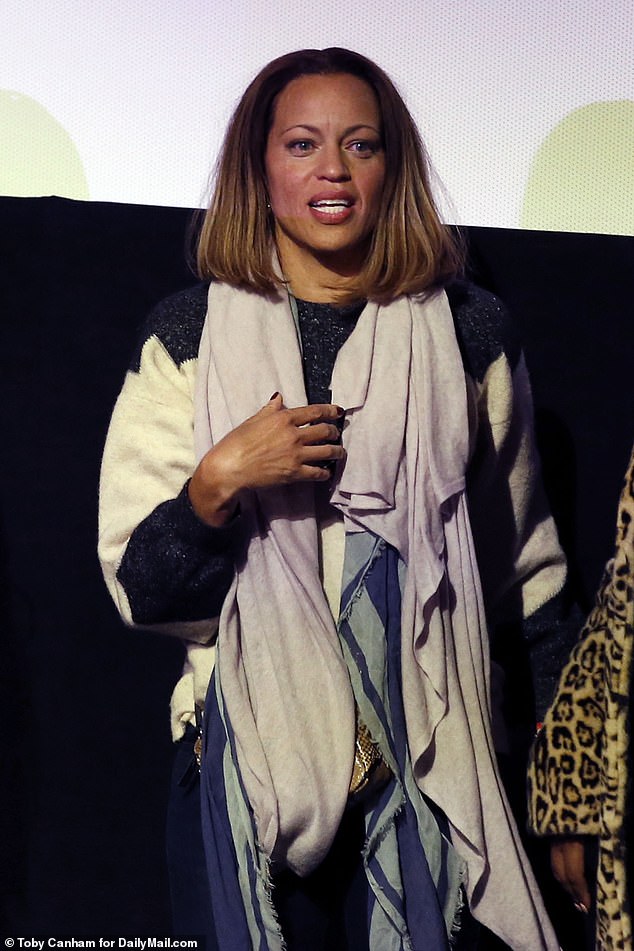 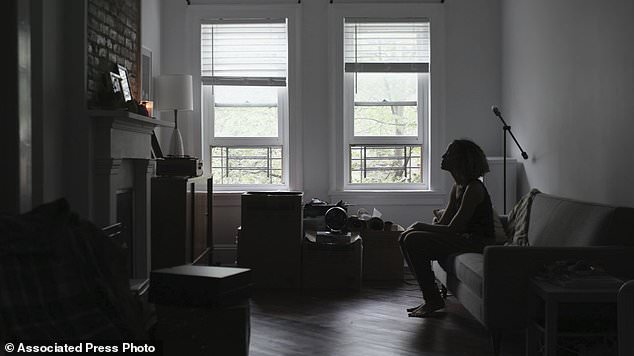 This undated photo provided by Chain Camera Pictures shows a scene from On the Record. Without Oprah or Apple, the Russell Simmons documentary On the Record went ahead with its premiere Saturday

There she claims her new boss L.A. Reid, who joined Arista in 2000, also stepped over the mark, making sexual advances towards her before making life difficult when she didn’t comply.

Another revelation which emerged in the film is that Dixon says she auditioned a young Kanye West but Reid passed him over just to get at her.

She said Reid told her the audition was a ‘waste of my time.’

Dixon also claims Reid passed over superstar singer John Legend for the same reason. In the film, fair-skinned Dixon, whose mother was the mayor of Washington, D.C., says her ‘light privilege’ would have helped her to come forward to accuse Simmons, but she revealed she was scared of being labeled as the woman who took down the godfather of hip-hop.

As well as Dixon another half a dozen other women go on camera to say Simmons sexually assaulted them.

In total 20 women have come forward to accuse Simmons of rape or sexual assault.

During the film another alleged victim, Sil Lai Abrams, says she attempted suicide after Simmons raped her in 1994.

The music mogul invited her back to his place after they had dinner together in New York and she remembers passing out on his bed.

‘He’s walking towards me and he’s naked accept he’s wearing a condom,’ she says in the film. ‘I couldn’t fight, I couldn’t do anything, I just lay there.’ 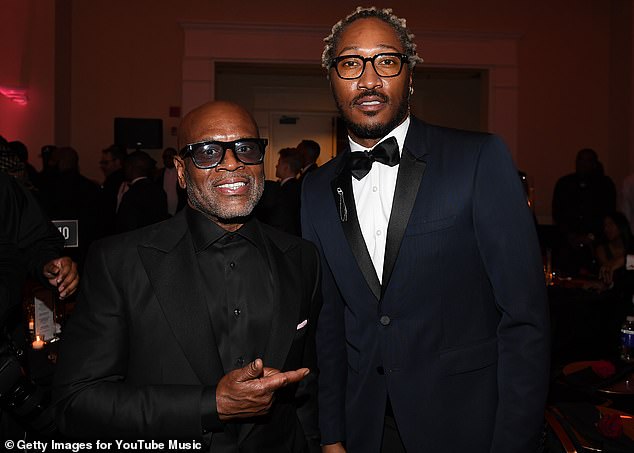 Dixon claims in the film that her new boss L.A. Reid (left), who joined Arista in 2000, also stepped over the mark, making sexual advances towards her before making life difficult when she didn’t comply. Pictured, L.A. Reid and Future attend YouTube Music 2020 Leaders & Legends Ball at Atlanta History Center on January 15, 2020 in Atlanta, Georgia

Afterwards Abrams said she was ‘angry’ and full of ‘self-loathing’. She says she swallowed 18 prescription sleeping pills and kissed her young son goodbye. She was rushed to hospital where medics saved her life.

‘It was definitely the low point of my life and it caverned me and I left fashion,’ she recalls.

The documentary states that both Simmons and Reid both declined to take part in the film and both denied the allegations.

The film ends by saying Simmons, 62, has moved to Bali, Indonesia – a country that doesn’t have an extradition treaty with the US.

After the screening the film’s two directors, Amy Ziering and Kirby Dick, thanked Sundance for ‘standing strong’ amid the controversy.

‘Thanks to Sundance for standing strong and never blinking,’ said Ziering. ‘These are difficult times. It’s important to stand up for truth, justice and moral authority.’

In the crowd in Park City was the actress Rosanna Arquette, who has accused Harvey Weinstein of sexual harassment. Arquette stood up during the Q&A to salute the women in the film. ‘I’m so proud of you,’ she said.

Kimberlé Williams Crenshaw, an attorney and civil rights advocate, after the film alluded to the history of black women who have accused public figures of assault, citing the treatment of Anita Hill and Desiree Washington, who accused Mike Tyson of rape.

‘You’ve seen this film. The question is will anyone else see it?’ Crenshaw said. ‘So whatever can be brought to bear to make sure that this doesn’t get snuffed out – think of all the history of what has already happened and say never again.’