Fans of the Seattle Seahawks made their thoughts and feelings known towards ex-quarterback Russell Wilson, booing him upon his return to Lumen Field as a Bronco for his first regular season game since his trade to Denver in March.

The 33-year-old was given a hostile reception upon leaving the tunnel for the turf ahead of the first league game of Monday Night Football.

A man on a mission against his old team, Wilson was desperate to get one over the line against his his former teammates on the Seahawks, who accused him of ‘checking-out’ midway through last season.

‘Wilson wanted to be boss…We said, SEE-YA!,’ read a fan’s poster from the bleachers near the tunnel where the Broncos were warming up pregame.

A different sign from another Seahawks fan read: ‘Better win or he will quit you too!’

‘Dude turned diva went Hollywood on us,’ read one of two placards held by a fan near the Broncos tunnel. The other read: ‘Who’s 2yr old came up with ‘lets ride da-pony”?’ 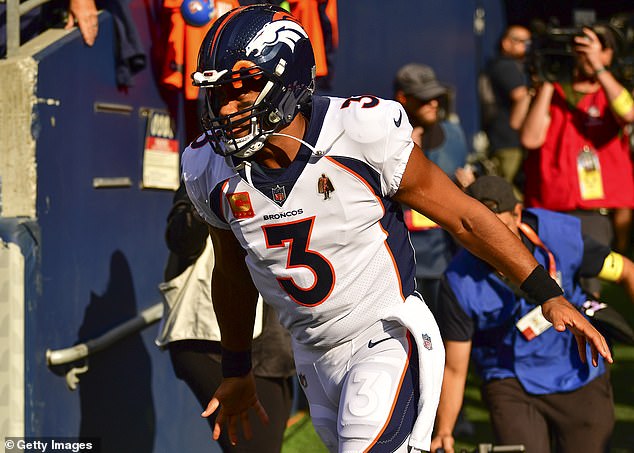 In March, Seahawks chairman Jody Allen revealed Wilson had initiated a trade to the Broncos after the quarterback did not digest the franchise firing offensive line coach Mike Solari and offensive coordinator Brian Schottenheimer.

The 33-year-old fired back at Allen, saying the trade was mutual. He further signed a five-year, $245milion extension in the offseason with the Broncos last week.

Seahawks and NFL fans were torn in reaction to the boos that Wilson had received, with some arguing that he had placed his former team on the map by bringing them to two Super Bowls. Others thought the quarterback’s frosty reception from fans was long overdue.

‘I cannot believe Russell Wilson is being booed by Seahawks fans. This guy took you to two Super Bowls and brought home one. This is not Favre to the Vikings,’ tweeted Jake Rongholt – sports anchor for Illinois-based radio station WGEM.

‘Russell Wilson being booed by Seahawk fans is a perfect example of why professional athletes should never worry about being loyal or withholding an public image to please everybody,’ a user shared.

‘If Russell Wilson is getting booed, then imagine the response when Deshaun Watson returns to NRG,’ another individual stressed.

‘I liked Russell Wilson while he was in Seattle. Now he’s the enemy, and the enemy gets booed. Pretty simple. “But what about all he did for the team?” I thought us Seahawks fans should stop living in the past?!,’ a nostalgic Seahawks fan tweeted.

Fans were torn into two camps on Twitter, some defending Wilson and others slamming him

‘Russell Wilsoin made it known he wanted out for two years, if you didn’t think he was going to get booed then you were dreaming,’ shared the Giant Insider Newspaper & Podcast.

Tension first started building between Wilson and the Seahawks in 2017 when the player said he was ‘f***ing pissed’ by the franchise’s pursuit to recruit college quarterback prospects, ESPN reported.

The Seattle-based team returned to Super Bowl XLIX just a year later for the second time in the franchise’s history, loosing to the New England Patriots.

In 2021, however, the Seahawks finished 7-10. It was the only the season in which Wilson had fewer than nine wins in a season during his time in the NFC.