Russia has charged dozens of Ukrainian soldiers with ‘crimes against humanity’ and wants them tried by an international tribunal led by Syria and Iran, the country’s top investigator has said.

Alexander Bastrykin, who heads the Russian Investigative Committee, said 92 Ukrainian ‘commanders and subordinates’ have been charged with ‘crimes against the peace and security of mankind’ over the war.

Another 96 people, including 51 of Ukraine’s top commanders, have been put on a wanted list which includes politicians and ‘nationalists’, Bastrykin added.

Alexander Bastrykin, Russia’s top investigator, says 92 Ukrainian commanders and their subordinates have been charged for ‘crimes against humanity’

The 68-year-old said it is ‘extremely doubtful’ whether the men could be prosecuted by the United Nations, due to what he called ‘the collective position of the West’ in supporting Kyiv.

Instead, he told local newspaper Rossiyskaya Gazeta that the men should be tried by an international tribunal led by Russia’s partners.

Such nations would include ex-Soviet states such as Armenia, Belarus, Kazakhstan, and Tajikistan, and allies further abroad such as India, China and Brazil.

Iran and Syria should also be invited to join the panel because of their ‘independent position on the Ukrainian issue’, he added.

Both Syria and Iran have given strong backing to Russia’s war in Ukraine, and have appalling human rights records at home.

Armenia, Belarus, Kazakhstan and Tajikistan are also run either as dictatorships or have histories of putting down protests with violence. 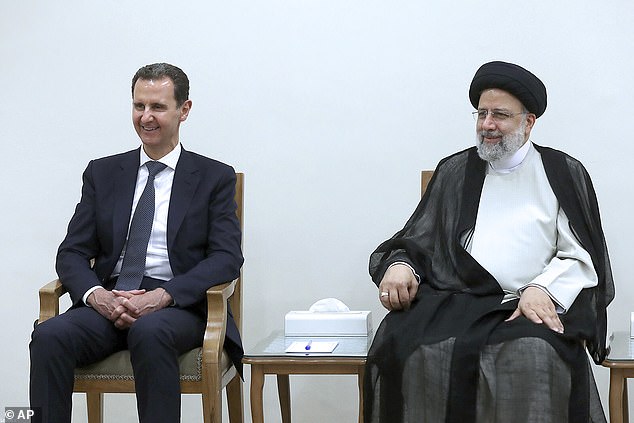 Russia wants the Ukrainians to be prosecuted by an international tribunal led by Syria and Iran, whose leaders (Assad and Raisi, pictured) both have appalling human rights records

China is accused of running concentration camps for Uyghur Muslims.

Bastrykin said another 220 people, including Ukraine’s high command, have been implicated in crimes against humanity by his investigators.

In total, 1,300 investigations are underway – including against what he called ‘foreign mercenaries’ from the UK, US, Canada, the Netherlands and Georgia.

Members of the Azov battalion – which defended the city of Mariupol until surrendering to Russia back in May – are also being investigated, he said.

And investigations are underway into officials at the Ministry of Health, he added, accused of developing chemical weapons to use against Russia.

The Kremlin has attempted to justify its war on Ukraine by pushing propaganda about chemical weapons, which it says were being developed in US-funded biolabs.

‘Eight criminal cases have been initiated on attacks on Russian embassies and diplomatic representatives in the Netherlands, Ireland, Lithuania, the Czech Republic, Poland, Romania and France,’ Bastrykin added. 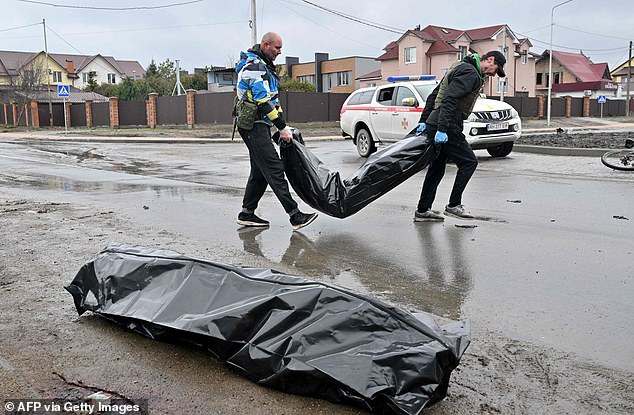 Ukraine is currently investigating more than 20,000 Russian war crimes alongside teams of international experts, including massacres in Bucha and Irpin (pictured)

The first to be jailed was tank commander Vadim Shishimarin, 21, who admitted shooting 62-year-old Oleksandr Shelipov dead in the opening days of the war.

Shishimarin said he was pressured to kill Shelipov by his comrades, fearing the elderly man – who was pushing his bike by the roadside – was about to report their location to Ukrainian troops.

Ukraine says it is investigating more than 21,000 crimes by Russian forces, while international teams of prosecutors have gone to the country to assist.

The International Criminal Court has described Ukraine as ‘a crime scene’ and has dispatched its largest-ever team to investigate.

Massacres in cities such as Bucha and Irpin are under investigation, as are strikes on hospitals and other buildings where civilians were sheltering from bombs.

Russia is now five months into what was supposed to be a days-long war to depose the government and install a puppet regime.

Estimates of the civilian death-toll are near-impossible to come by, but Ukraine believes it runs into at least the tens of thousands.

United Nations human rights chiefs have documented at least 5,000 deaths, but say there are likely many more that cannot be verified due to fighting.

Kyiv says hundreds of thousands more Ukrainians have been forcibly deported from their homes and taken via ‘filtration camps’ to mainland Russia or else locked up in squalid jails on occupied Ukrainian territory.