President Vladimir Putin said the Russian navy will get 40 new ships this year, as he attended a naval parade in St Petersburg on Sunday marking the country’s Navy Day.

The parade in the port city and the nearby town of Kronshtadt featured 200 ships and vessels and over 4,000 troops and aimed to ‘demonstrate the growing power of our navy,’ Putin said on Friday.

He said 40 ships of different classes will enter service this year, and that the Russian navy will be equipped with hypersonic weapons to boost its combat capabilities.

Opening the parade, he said that ‘six more vessels for the far-sea zone were laid down at Russia’s three leading shipyards’ in the past few days.

The Kremlin has made military modernization its top priority amid tensions with the West that followed Moscow’s 2014 annexation of Crimea.

Similar parades marking Russia’s Navy Day on Sunday took place in the Far Eastern cities of Vladivostok and Petropavlovsk-Kamchatsk, Sevastopol in the annexed Crimea, the seaport towns of Severomorsk and Baltiysk, Kaspirsk in the south of Russia and the port city of Tartus in Syria. 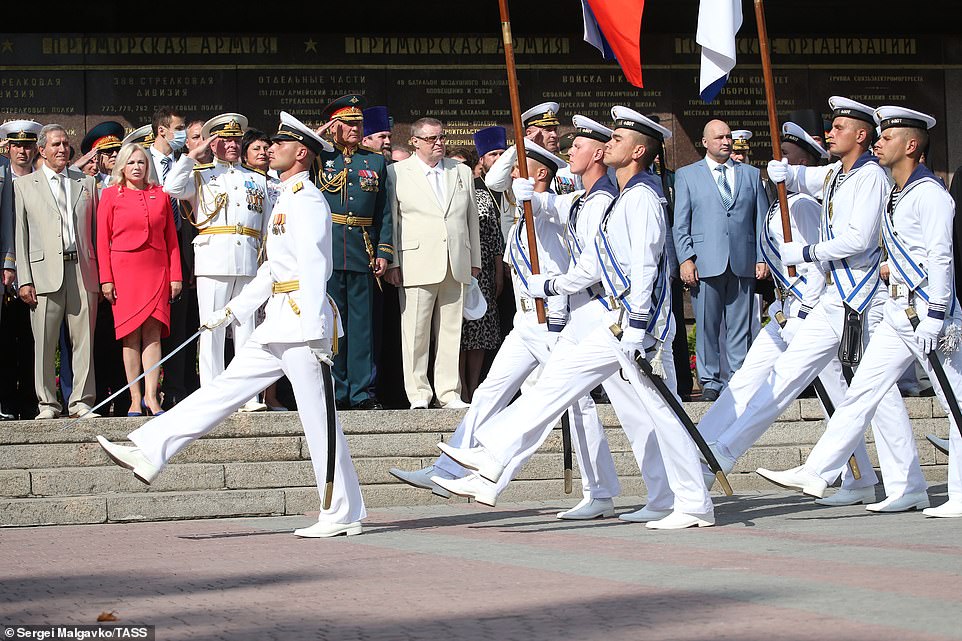 Russian servicemen march during a military parade on Russian Navy Day. The event is traditionally celebrated on the last Sunday of July 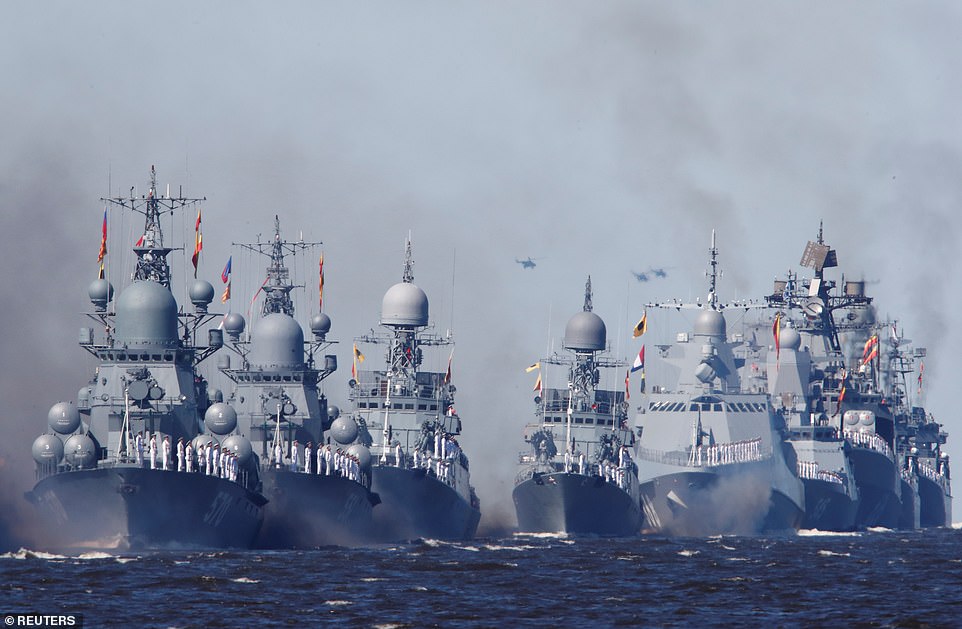 Russian warships sail during the Navy Day parade in Kronstadt near Saint Petersburg, Russia, today as part of the day’s celebrations 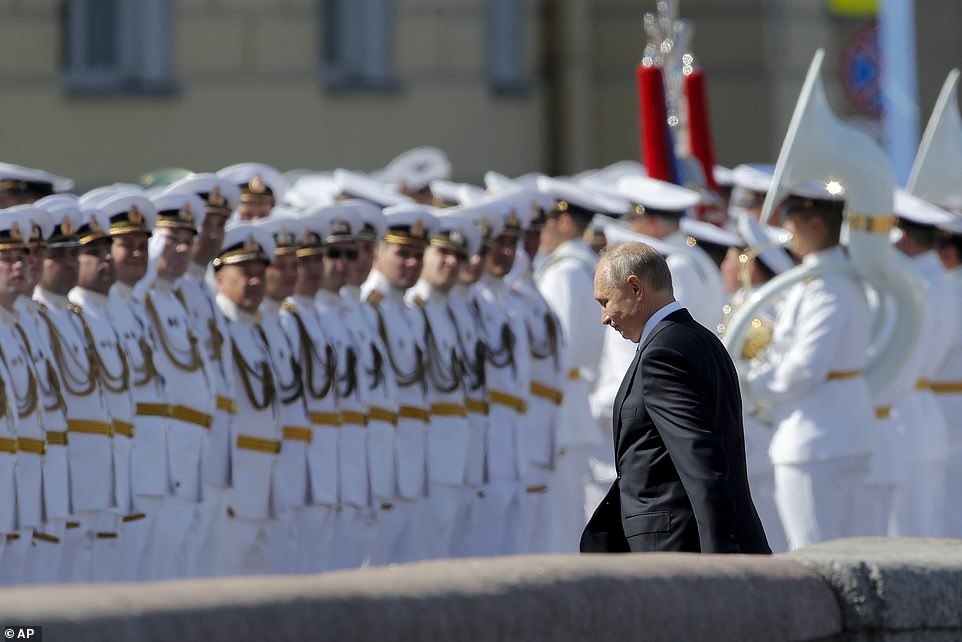 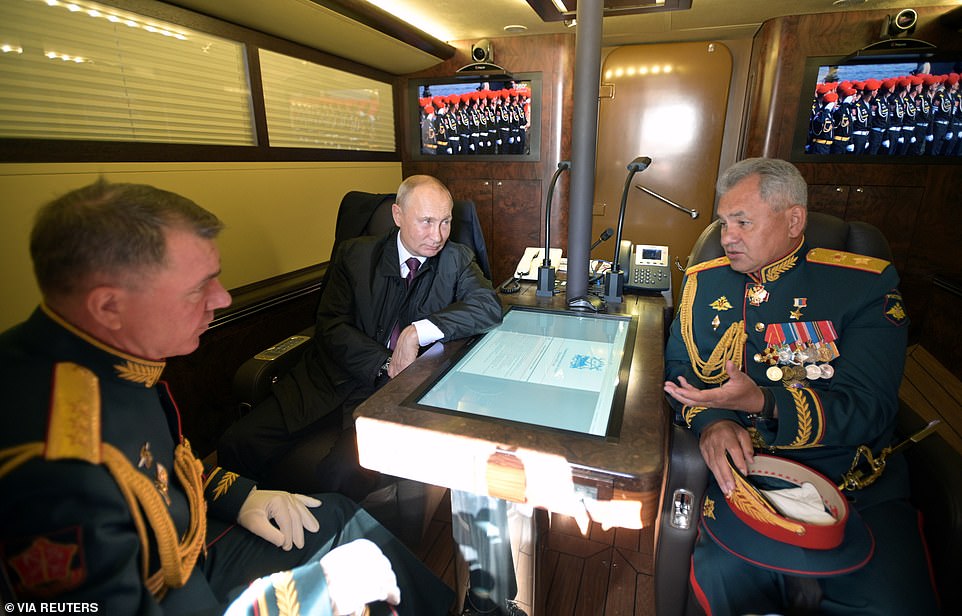 Earlier this week Putin attended a ceremony of keel-laying of new warships in Crimea and pledged to continue an ambitious program of building new warships, saying that Russia needs a strong navy to defend its interests and ‘help maintain a strategic balance and global stability.’

Traditionally celebrated on the last Sunday of July, the Navy Day is a national holiday in the Russian Federation that honours the sailors in units of the Russian Navy and its specialised arms.

Vladimir Putin and Russia’s Defense Minister Sergei Shoigu were photographed on board a Raptor boat in the Kronstadt roadstead ahead of inspecting warships participating in the military parade. 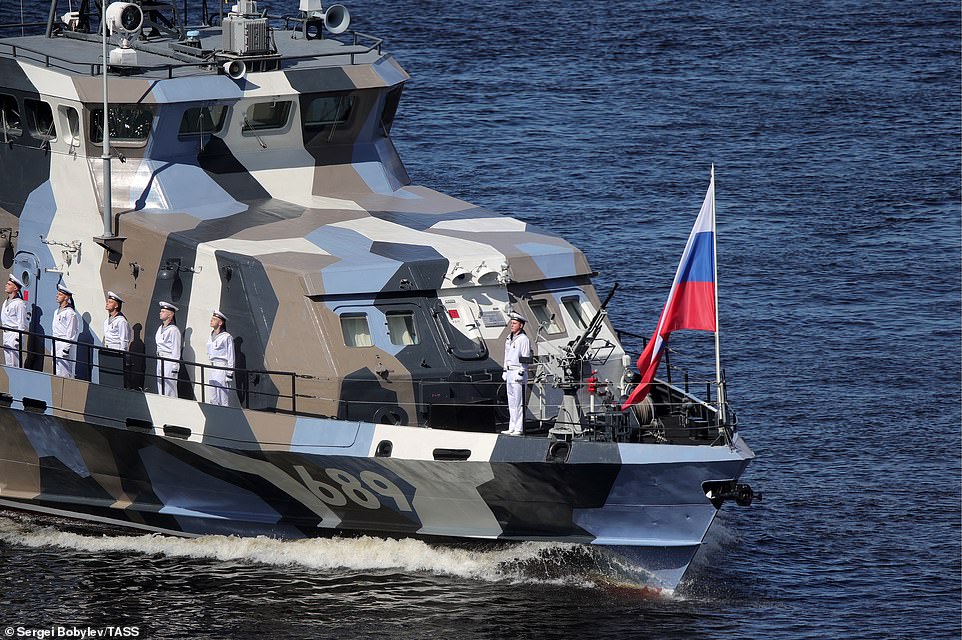 The Nakhimovets counter sabotage boat takes part in a military parade on Russian Navy Day. The Navy Day is a national holiday in the Russian Federation 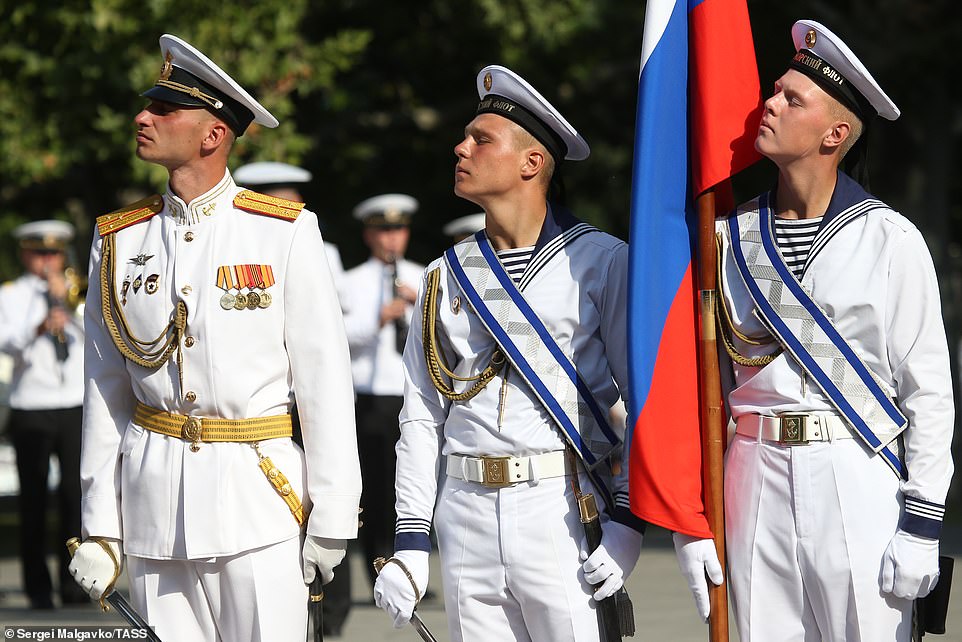 Russian servicemen take part in a military parade on Russian Navy Day. The event honours the sailors in units of the Russian Navy and its specialised arms

Putin also gave a speech at the event where hundreds of soldiers sailed in small missile ships to celebrate the day.

Russian Defense Minister Sergei Shoigu said on Tuesday: ‘Overall, the festivities will involve about 200 warships of various classes, more than 100 items of combat hardware, up to 80 aircraft and about 15,000 personnel.’ 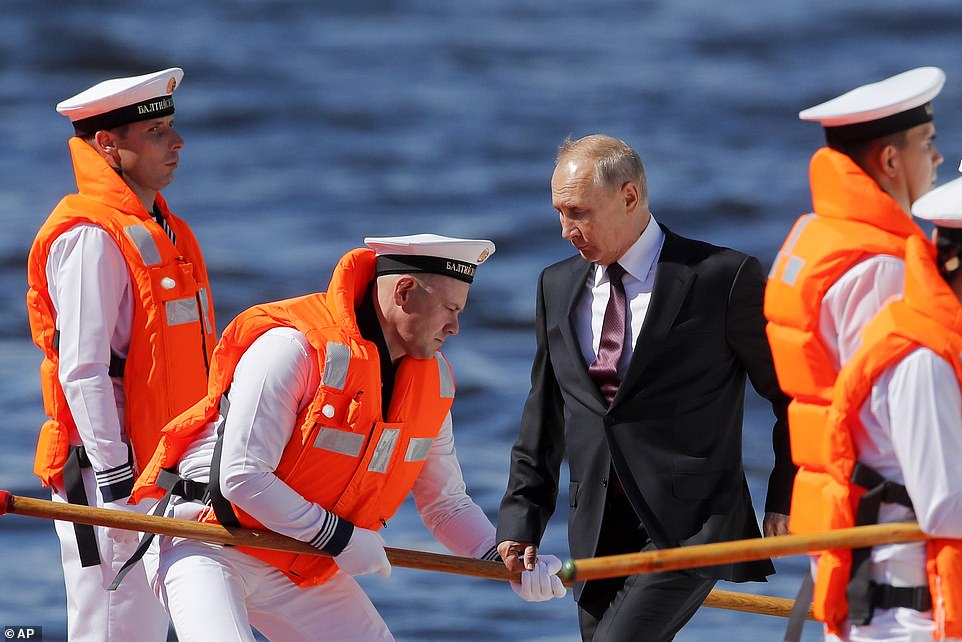 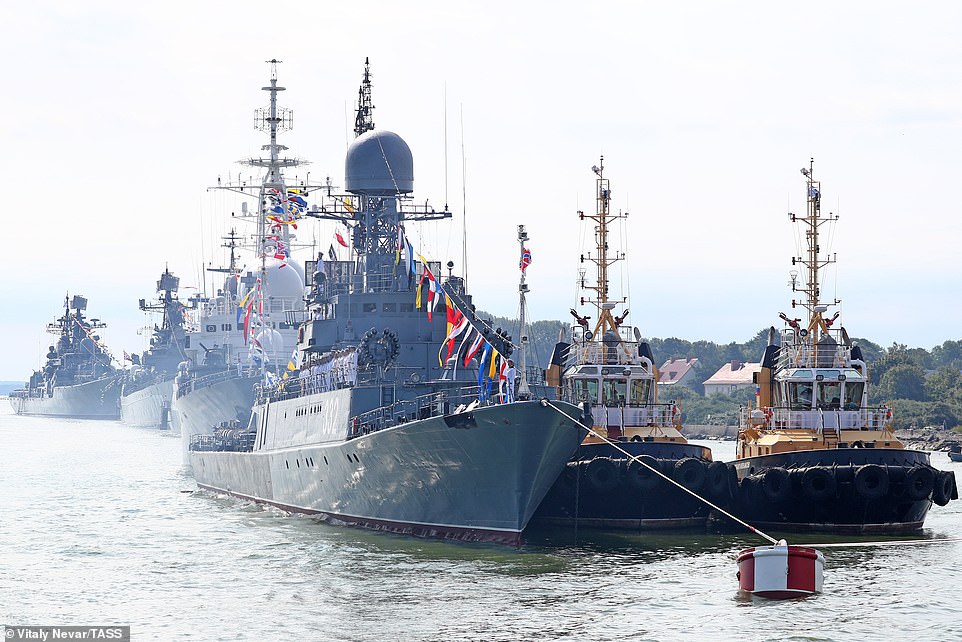 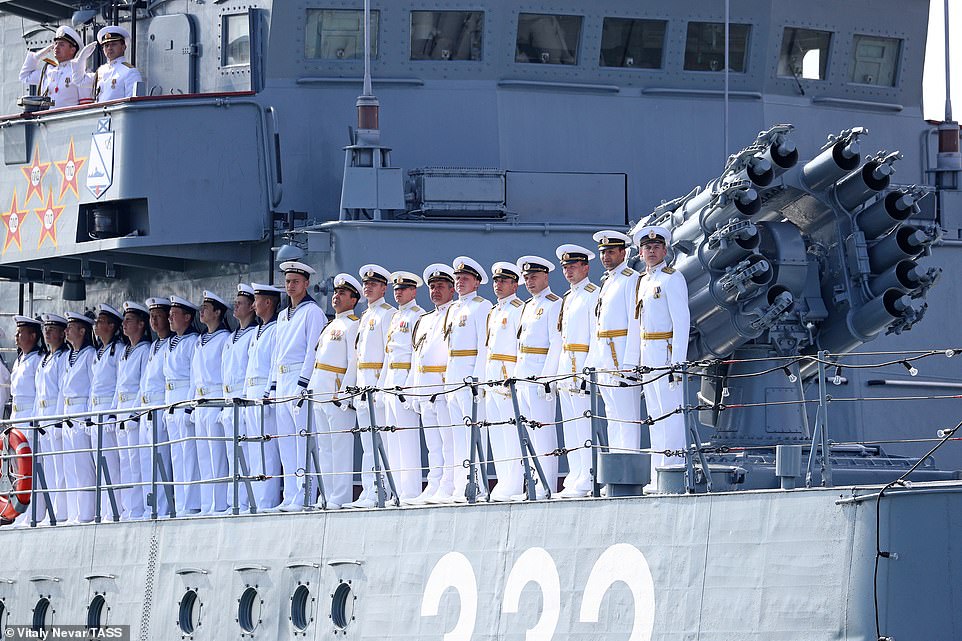 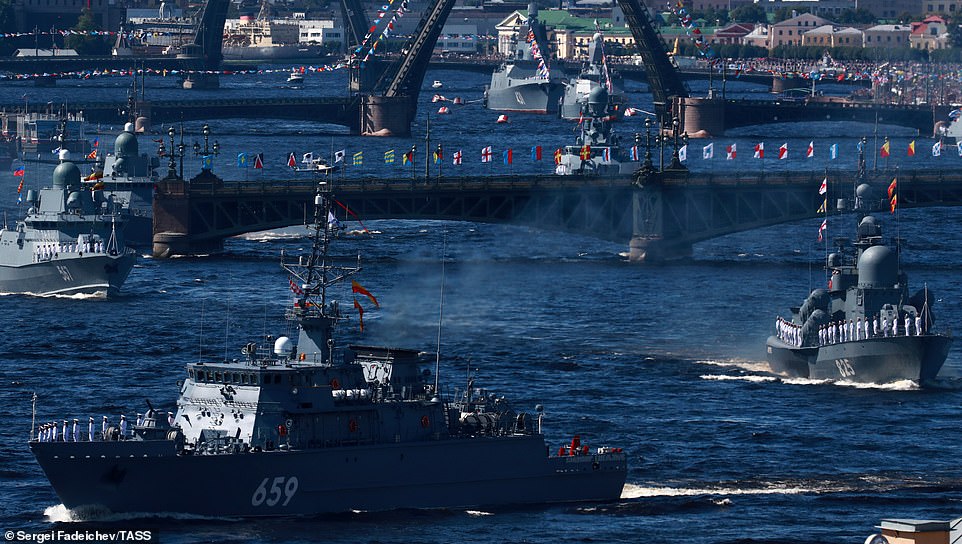 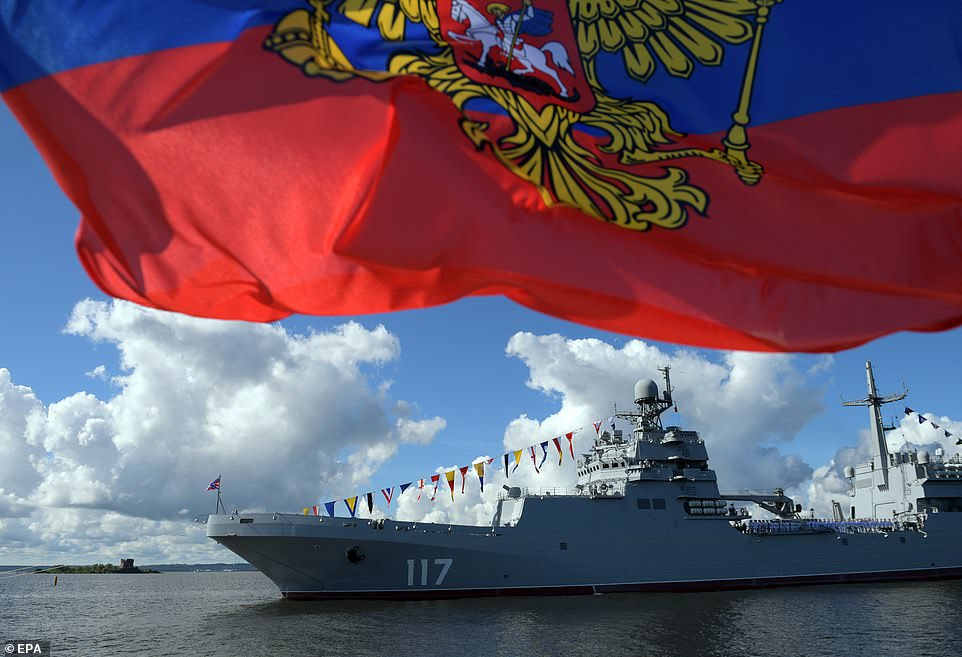 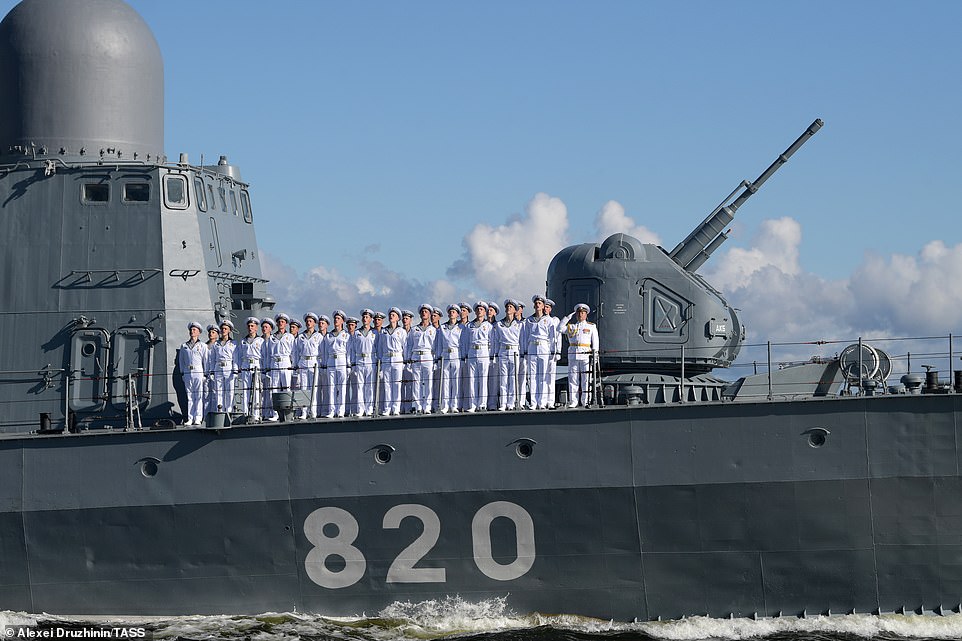 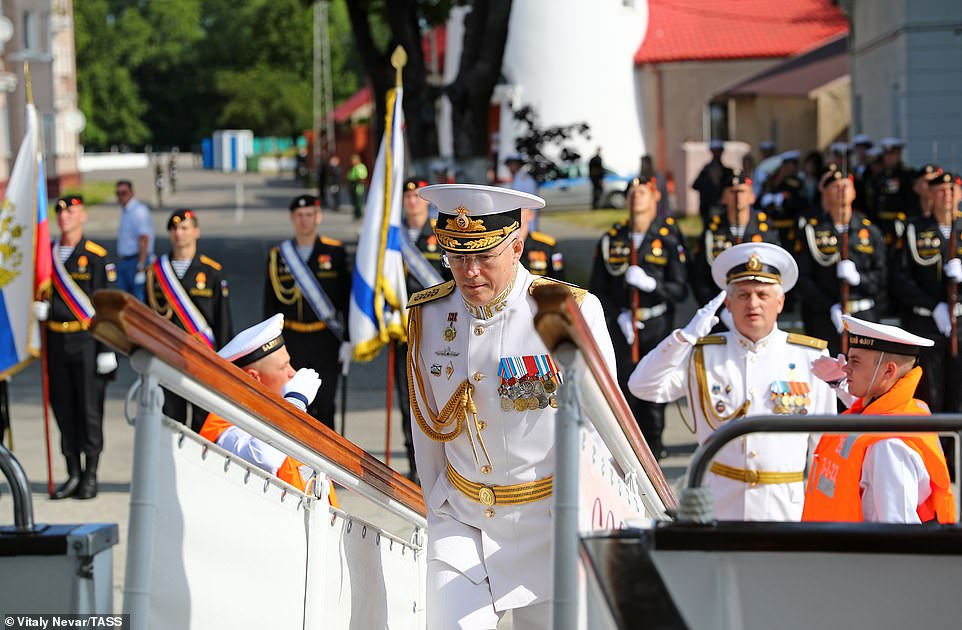