Space junk is littering the final frontier and Russia has contributed more to the collection than any other country.

A new infographic reveals which countries owns the garbage floating in space and Russia is responsible for 14,403 pieces and the US comes in second with 8,734.

The compiled data shows more than 30,000 particles from satellites, rockets and other man-made devices are orbiting Earth, which is more than double what was found in orbit two years ago.

A new infograph reveals which countries owns the garbage floating in space – Russia is responsible for 14,403 pieces and the US comes in second with 8,734. An electronics distributor found that there are 30,000 particles from satellites, rockets and other man-made devices are orbiting Earth

Space junk left behind after missions can be as big as spent rocket stages or as small as paint flakes.

With fragments able to travel at speeds above 16,777 mph, even tiny pieces could seriously damage or destroy satellites.

Data from Space-Track.org allowed Corby-based electronic company RS Components to analyze just how many bits of debris are currently orbiting Earth and which country they belong to.

In 2018, the RC Components complied the same data and found the US had contributed the most space junk with 4,037 and Russia followed with 4,035. 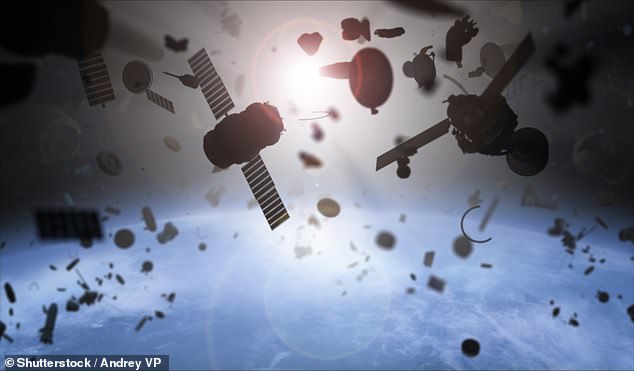 Space junk left behind after missions can be as big as spent rocket stages or as small as paint flakes. With fragments able to travel at speeds above 16,777 mph, even tiny pieces could seriously damage or destroy satellites

However, in just two years, Russia moved to the top spot with 14,403 pieces.

India saw an increase with 124 more particles in the past two years, bringing its total to 517.

There are more countries on the list, such as Italy, Germany and the UK, but most have just one piece floating around in orbit.

‘Efforts to clean up space have been underway for a number of years, but there’s still a long way to go – and, until then, it seems like Israel and Italy are the countries to follow,’ reads the report from RC Components.

‘Although they have in the past, these two countries don’t currently have any debris in orbit due to junk that has since decayed.’ ‘The UK’s efforts are significant too, with one piece of junk currently in orbit (although four that have been in orbit but since decayed), they’re one of the countries working towards an improved and cleaner space.’

As Russia has contributed the most in the past two years, the country has recently dumped 65 more pieces into orbit.

A rocket used to launch a scientific satellite into space has broken apart after nine years in orbit broke apart earlier this month and left dozens of pieces of debris around Earth.

The Fregat-SB is a type of space tug and its upper stage was left floating after it helped deliver the Spektr-R satellite in 2011, according to Roscosmos.

Spektr-R was a radio telescope launched by the Russian space agency but it stopped responding to ground control last year and was declared dead in May 2019.

Roscosmos confirmed the breakdown of the rocket happened on May 8 between 06:00 and 07:00 BST somewhere above the Indian Ocean.

The Russian space agency is studying data to find out how many parts it broke up into and where they are currently orbiting the planet.

The US18 Space Control Squadron that tracks all objects in Earth’s orbit say there are at least 65 pieces from the rocket in orbit.

US18 wrote on Twitter: ‘Confirmed that the breakup of FREGAT DEB occurred on May 8, 2020, between 0402 and 0551 UTC. Tracking 65 associated pieces – no indication caused by collision.’

WHAT IS SPACE JUNK?