A Ukrainian military chief has claimed Russia has left troops in Belarus after staging its war games amid fears Vladimir Putin is preparing for an invasion.

In an interview on a military plane on Thursday evening, Ukraine’s Commander in Chief Viktor Muzhenko said Russia has withdrawn only a few units from Belarus and had lied about how many of its soldiers were there in the first place.

His comments could increase tension between the two neighbours and contradict the Belarussian defence ministry spokesman, who said the last train of Russian troops and equipment had left Belarus yesterday.

Army vehicles are seen driving towards an undisclosed location in Belarus as Zapad 2017 kicks off at several locations in Belarus, the Baltic Sea, Russia and Kaliningrad 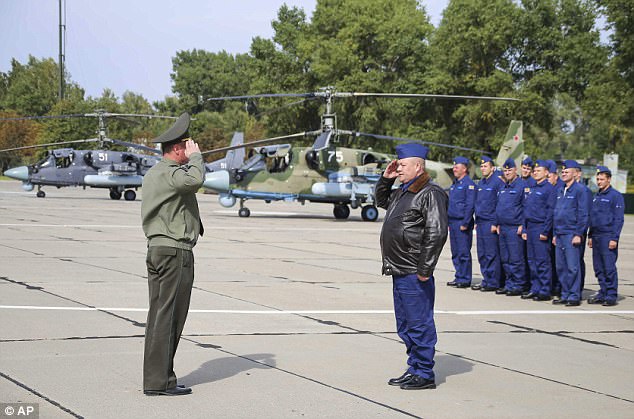 Russian military pilots, right, report upon arrival at an airbase in Belarus ahead of the controversial games which started today and will last a week, simulating a rebellion uprising backed by a ‘fictional foreign power’

Relations between Kiev and Moscow nosedived after Russia’s annexation of the Crimean peninsula in 2014 and the outbreak of a separatist insurgency in eastern Ukraine that has killed more than 10,000 people.

Ukraine sees itself as being at war with Russia and has accused Moscow of sending troops and hardware to fight in the Donbass region, which Moscow denies.

There are frequent casualties despite a notional ceasefire agreed in 2015.

The Zapad wargames, held by Russian and Belarussian troops on territory in both countries in September, are a new source of concern for neighbouring Ukraine and NATO member states on Europe’s eastern flank.

Russia has said the exercise was to rehearse a purely defensive scenario, that the scale of the wargames was in line with international rules, and that allegations it was a springboard to invade Poland, Lithuania or Ukraine were false.

But Muzhenko said the wargames were of an offensive nature. Ukraine staged its own drills in northern Ukraine in response to Zapad and built up troops there.

‘I wouldn’t say that the tension has lessened. We can say tension is building up or rising,’ he said.

‘We had information that they had withdrawn only a few units of the declared 12,500 troops, of which 3,000 were Russians, but there were significantly more of them there.’ 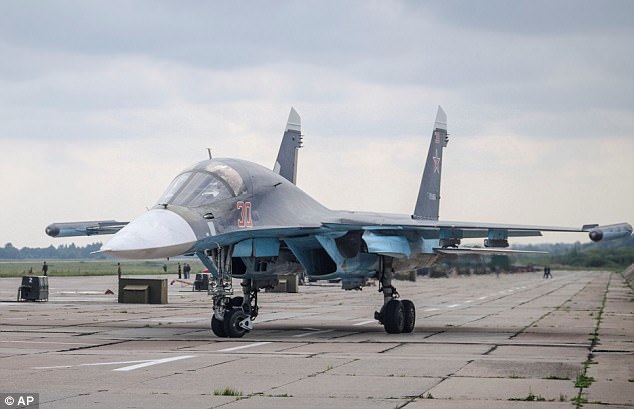 Russia and Belarus claims some 13,000 people are involved in the drills, but NATO officials say they fear it is closer to 100,000 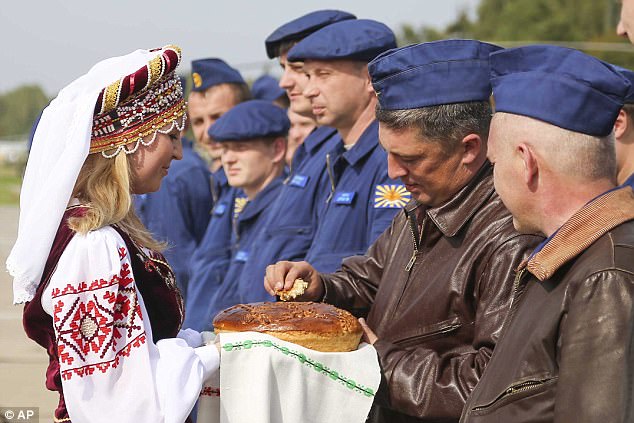 Muzhenko said the Russians had withdrawn air units from Belarus to make a show of leaving.

He said: ‘Russia demonstrated, and it was primarily a demonstration, the return of aviation units – they took off from the airfields and flew to airfields in Russia.

‘But we understand that 300-400 km for aviation is a distance that can be overcome in a very short time.’

The 55-year-old, who became Chief of the General Staff in 2014, said Ukraine was still outgunned in terms of its air defence capabilities in the Donbass war and needed air reconnaissance and anti-missile systems.

Kiev is hoping to receive lethal defensive weapons from US President Donald Trump. Muzhenko said talks had been concluded.

He said: ‘We expect the corresponding decision because all negotiations are over and the relevant issues have been agreed – on the list and types of weapons – and we expect only the political decisions of our partner countries.’

Russia’s defence ministry did not respond to an immediate request for comment.