Russia plans law to fine people £36 for claiming HIV and AIDS don’t exist as conspiracy theory spreads online and more than 100,000 people were infected with the deadly virus last year

Russia is planning to create a new law to make it illegal to claim HIV isn’t real amid spiralling rates of the virus in the country.

Thousands of people living in Russia belong to social media groups spreading myths HIV has been made up by pharmaceutical companies.

As a result, many infected don’t take medication to manage it and people are less careful about protecting themselves from the condition.

Although HIV infections and AIDS deaths are falling around the world, they have risen in Russia in recent years.

In at least one city, The Times reported, as many as one in every 50 people are HIV positive, and a government minister called the situation a ‘national catastrophe’.

A new law against HIV/AIDS denial may be brought into force by the Kremlin later this year and would see people fined around 3,000 Russian roubles (£36).

More than 100,000 people were diagnosed with HIV for the first time in Russia last year and experts fear the spread of a conspiracy theory about the virus being made up is contributing to rising infections (Pictured, a doctor in Moscow draws blood to test a patient for HIV last week)

‘The problem is taking on a massive character and, with the spread of HIV in Russia, makes it dangerous for society,’ the country’s health ministry said.

One group on a Russian social media network is named ‘HIV Aids is the greatest hoax of the XX century’ and has more than 16,000 members, The Times said.

And one post read ‘Guys, no testing for mythical HIV! We don’t agree to poison therapy’.

People sucked in by the belief HIV and AIDS aren’t real are ignoring medical advice and refusing treatment for themselves and their children.

At least 65 deniers are believed to have died of AIDS in the past four years, as well as 17 children whose parents wouldn’t let doctors treat them.

There are between 900,000 and 1.2million Russians living with HIV, according to the World Health Organization, in a population of 144m people.

And more than 100,000 new cases of the infection were diagnosed in 2018 – equivalent to around one in every 18 cases worldwide. 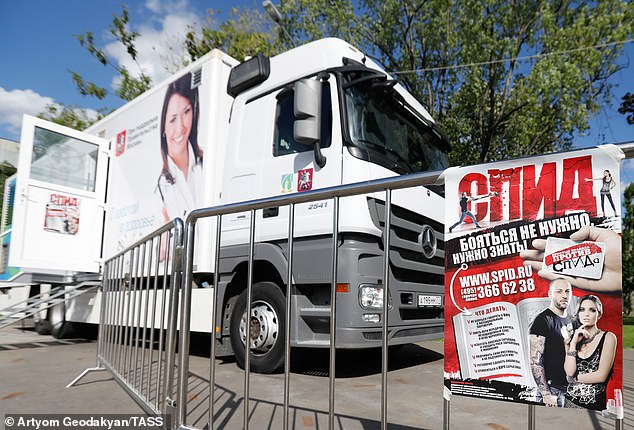 At least 65 HIV deniers and 17 of their children are believed to have died in the past four years in Russia after denying medical treatment (Pictured, a mobile laboratory van in Moscow last week) 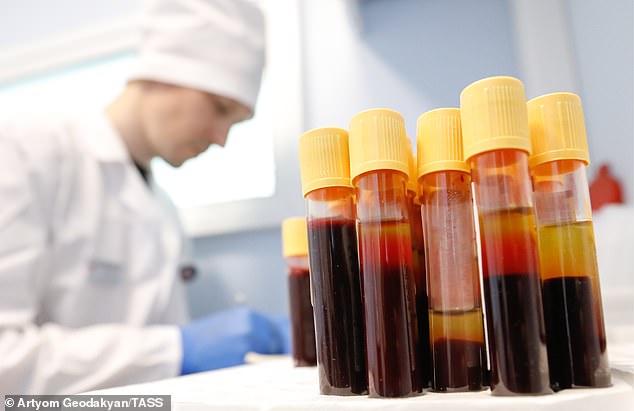 HIV is a virus which infects the blood and is most commonly spread by unprotected sex or sharing needles (Pictured, blood samples are tested as part of Russia’s ongoing Stop HIV/AIDS campaign)

HOW MANY PEOPLE HAVE HIV/AIDS WORLDWIDE?

At the end of 2017 – the latest data available – 36.9million people worldwide were living with HIV.

Globally, just 57 per cent of infected adults and 52 per cent of children receive antiviral therapy to keep their HIV under control.

In the UK more than 98 per cent of people diagnosed with HIV – there are around 101,000 people with the infection – are on antiviral treatment.

Around 1.1m in the US are living with HIV.

About three quarters – 73 per cent – of new infections in Russia are spread by heterosexual sex and 25 per cent by drug injection.

Many die of other more routine illnesses like pneumonia which their body can no longer fight off.

However, modern treatments are now so good they can – if taken properly – completely suppress the virus for someone’s entire life.

This stops them being able to spread it and prevents AIDS from ever developing.

However, fewer than 40 per cent of Russians with HIV are believed to be receiving this kind of treatment, putting many at risk of catching the virus.

The Kremlin – the Russian government – has been criticised for not having a clean needles programme for drug users and not allowing sex education in schools.

A spokesman for Moscow’s Independent AIDS Centre, Anton Krasovsky, told The Times: ‘People who deny the existence of HIV/Aids should be helped, and not punished.

‘Many of them live with HIV, and have psychological problems. They are in denial. But Russia always tries to resolve problems by punishing people.’