Russia has claimed that US and UK are developing secret space weapons as it dismissed accusations of test-firing an anti-satellite weapon in orbit.

Moscow issued its response earlier today after being furiously condemned by the United States Space Command for a ‘concerning’ act that they said had threatened peace in space.

The Kremlin called reports it launched the anti-satellite device as ‘propoganda’ and in turn accused the US and UK of making their own moves to develop similar weaponry.

The US and UK ‘naturally keep silent about their own efforts,’ it said, claiming the countries had ‘programmes on the possible use of ‘inspector satellites’ and ‘repair satellites’ as counter-satellite weapons.’

Russia was forced to dismiss the accusations after the USSC on Thursday warned that their actions warranted a ‘real, serious and increasing’ threat against US systems.

The head of Britain’s Space Directorate, Air Vice-Marshal Harvey Smyth, also reacted, tweeting that ‘actions of this kind threaten the peaceful use of space.’

The Russian foreign ministry insisted on Moscow’s ‘commitment to obligations on the non-discriminatory use and study of space with peaceful aims.

‘We call on our US and British colleagues to show professionalism and instead of some propagandistic information attacks, sit down for talks,’ the ministry said in a statement.

The US said that Russia conducted a ‘non-destructive test of a space-based anti-satellite weapon’.

‘Clearly this is unacceptable,’ tweeted US nuclear disarmament negotiator Marshall Billingslea, adding that it would be a ‘major issue’ discussed next week in Vienna, where he is in talks on a successor to the New START treaty.

The treaty caps the nuclear warheads of the US and Russia – the two Cold War-era superpowers. 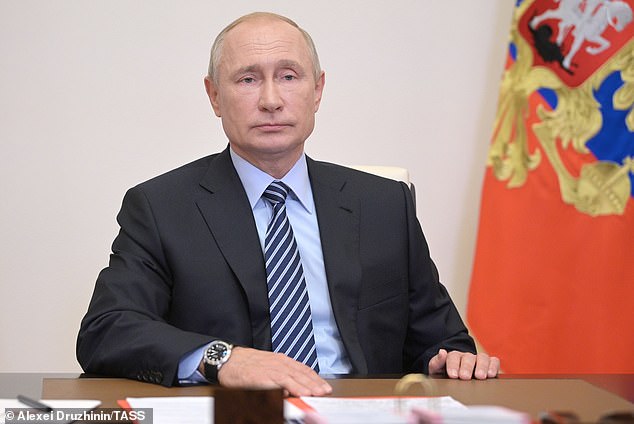 The Russian foreign ministry said tests carried out by the country’s defence ministry on July 15 ‘did not create a threat for other space equipment and most importantly, did not breach any norms or principles of international law.’

Commenting earlier today on the accusations, Kremlin spokesman Dmitry Peskov said Russia supports ‘full demilitarisation of space and not basing any type of weapons in space.’

The US Space Command said the test consisted of Russia’s satellite called Cosmos 2543 injecting an object into orbit.

Russian state media reported in December that a satellite called Cosmos-2542, which was launched in November 2019 by the Russian military, ejected another smaller satellite once in space.

The Russian defence ministry said the inspector-satellite was meant to ‘monitor the condition of Russian satellites,’ but state daily Rossiiskaya Gazeta said it could also ‘get information from somebody else’s satellites.’

The system is the same one that Space Command raised concerns about earlier this year, when it manoeuvred near a US government satellite, said General Jay Raymond, head of US Space Command.

‘This is further evidence of Russia’s continuing efforts to develop and test space-based systems, and consistent with the Kremlin’s published military doctrine to employ weapons that hold US and allied space assets at risk,’ Raymond said in a statement.

When Ronald Reagan proposed a network of space lasers to knock out incoming nuclear missiles, the scheme was almost immediately dubbed ‘Star Wars’.

Addressing his nation on television in 1983, he said the ‘Strategic Defense Initiative’ was not an act of aggression but a sign that the United States was prepared to defend itself.

The two-term American leader asked: ‘What if free people could live secure in the knowledge that their security did not rest upon the threat of instant US retaliation to deter a Soviet attack, that we could intercept and destroy ballistic missiles before they reached our own soil or that of our allies?’

After the Cold War came to an end, funding for the Strategic Defence Initiative was cut. The scheme was reorganised and renamed several times.

It is the latest example of Russian satellites behaving in a manner ‘inconsistent with their stated mission,’ the Space Command statement added.

The statement also came as China launched a rover to Mars on Thursday, a journey coinciding with a similar US mission as the powers take their rivalry into deep space.

Britain and America condemned the Kremlin for a ‘concerning’ act they said threatened peace in space on Thursday.

The weapon’s debris alone threatens the satellites the world depends on, according to the head of the UK military’s space directorate.

Moscow fired the weapon from its Cosmos 2543 satellite last week. It did not target another spacecraft but came close to a Russian satellite.

A US statement said the launch was ‘another example that the threats to US and Allied space systems are real, serious and increasing’.

It is the first time the British and American military have publicly accused the Kremlin of carrying out an anti-satellite weapons test in space.

The Russians have in the past conducted low-level tests with weapons in orbit but nothing of this size.

One UK defence source said: ‘This is using a satellite as a space weapon. It is a step in the direction of turning space into a new frontline.’

A second added: ‘They’ve crossed a line when it comes to the scale of this.’

Britain depends on satellites in many crucial areas, including communications, navigation via satnav devices and weather forecasting. Ministers have previously said an enemy state could affect the ability of the emergency services to respond to urgent incidents by taking out satellites.

In a statement released yesterday, Air Vice-Marshal Harvey Smyth, chief of the MoD’s space directorate, said: ‘We are concerned by the manner in which Russia tested one of its satellites by launching a projectile with the characteristics of a weapon.

‘Actions of this kind threaten the peaceful use of space and risk causing debris that could pose a threat to satellites and the space systems on which the world depends. We call on Russia to avoid any further such testing.

‘We also urge Russia to continue to work constructively with the UK and other partners to encourage responsible behaviour in space.’

Cosmos 2543 was launched into space on a Soyuz rocket that took off from the Plesetsk Cosmodrome in north-west Russia on November 26.

It was combined with a second satellite, which split from it 11 days after the launch.

In a telephone phone call last night, US President Donald Trump expressed hope to his Russian counterpart Vladimir Putin that they could avoid ‘an expensive three-way arms race’ between the US, China and Russia. 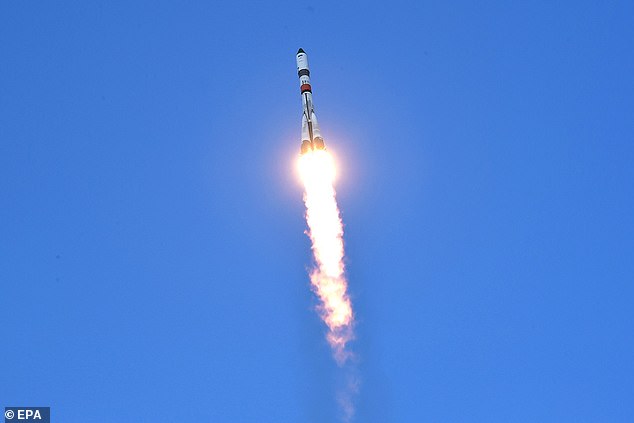 The Russian Soyuz-2.1a carrier rocket with the Progress MS-15 cargo spacecraft lifting off from the launch pad at the Baikonur cosmodrome in Kazakhstan, 23 July 2020

In a statement, Washington said the launch of the weapon was further evidence of Russia’s efforts to develop and test space-based systems.

General John Raymond, head of US space command, said it was ‘consistent with the Kremlin’s published military doctrine to employ weapons that hold US and allied space assets at risk’. The US State Department has raised concerns that Russian satellites display characteristics of a ‘space-based weapon’.

Dr Christopher Ford, the US assistant secretary of state, said: ‘This event highlights Russia’s hypocritical advocacy of outer space arms control, with which Moscow aims to restrict the capabilities of the United States while clearly having no intention of halting its own counterspace program.’

Defence Secretary Ben Wallace told the House of Commons on Wednesday that the UK was ‘deeply vulnerable’ in space.

He added: ‘The threat against space is regretfully real, our adversaries are weaponising space and we are deeply vulnerable in the West from those types of actions because we rely so much on space assets.’

‘This is further evidence of Russia’s continuing efforts to develop and test space-based systems, and consistent with the Kremlin’s published military doctrine to employ weapons that hold US and allied space assets at risk.’

The UK said the launching of the projectile  ‘with the characteristics of a weapon’ and warned that it could ‘threaten the peaceful use of space’.

It is the first time the Ministry of Defence has called out Russian activity of this sort.

The head of the UK’s space directorate, Air Vice-Marshal Harvey Smyth, said: ‘We are concerned by the manner in which Russia tested one of its satellites by launching a projectile with the characteristics of a weapon.

‘Actions of this kind threaten the peaceful use of space and risk causing debris that could pose a threat to satellites and the space systems on which the world depends.

‘We call on Russia to avoid any further such testing.

‘We also urge Russia to continue to work constructively with the UK and other partners to encourage responsible behaviour in space.’

The press release from US space command today, added: ‘Last week’s test is another example that the threats to U.S. and Allied space systems are real, serious and increasing.

‘Russia’s development and testing of orbital weapons highlights the importance of establishing the U.S. Space Force as a new branch of the armed forces and the U.S. Space Command as the nation’s unified combatant command for space.

‘It is a shared interest and responsibility of all spacefaring nations to create the conditions for a safe, stable, and operationally sustainable space environment.’