A Russian billionaire has offered to buy two historical US statues that BLM protesters want removed from public view due to their links to racism and colonialism.

Businessman Andrey Filatov, 48, who runs the Art Russe Foundation – focusing on the preservation of soviet-era art – has made an offer to purchase two statues that US officials have backed for removal.

Former President Theodore Roosevelt’s statue outside the American Museum of Natural History in New York City and a depiction of the first governor of Russian colonies in Alaska, Alexander Baranov, found in Sitka, Alaska, have both been marked for uprooting.

And now it appears the banished statues may not remain in the US, with potential Russian buyer Mr Filatov stating that he would export them to St. Petersburg, Russia, where they would be celebrated for the ‘positive mark’ both men left on Russia, reports CNN.

New York’s Museum of Natural History announced last month that its statue of President Theodore Roosevelt, which has stood at the entrance since 1940, is set to be removed

An Art Russe Foundation spokesperson told the broadcaster: ‘We have deep respect and appreciation for individuals who contributed to the development of Russia and were associated with the history of our country.

‘Both the 26th President of the United States, Theodore Roosevelt, and the governor of Russian settlements in North America, Alexander Baranov, were statesmen who left their positive mark in Russia’s history. We therefore see the need to preserve their memory for future generations.’

The statues are just two of hundreds sparking controversy in the US as BLM protesters call for the nation to face its problematic history, with many confederate monuments torn down in the south.

New York’s Museum of Natural History announced last month that its statue of President Theodore Roosevelt, which has stood at the entrance since 1940, is set to be removed after gaining approval from mayor of New York City Bill de Blasio and governor Andrew Cuomo. 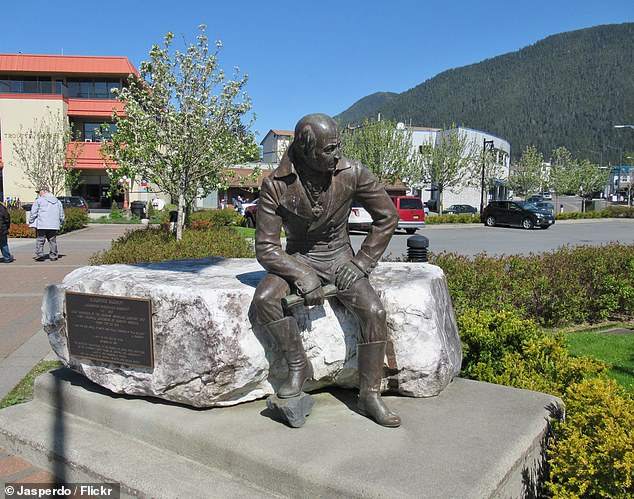 Alexander Baranov established and acted as a governor for the first Russian colonies in Alaska and was the general manager of the Russian-American Company. His statue in in Sitka, Alaska

The statue features Roosevelt being flanked by a Native American man and an African man while riding on horse back, suggesting they are ‘subjugated and racially inferior’, de Blasio said in a statement.

The Republican and 26th president of the United States, whose face is depicted on Mount Rushmore alongside George Washington, Thomas Jefferson, and Abraham Lincoln, is credited with laying the groundwork for the modern Democratic party.

His progressive policies leveled the playing field between rich and poor, a mantle which was carried forward in the modern liberalism of his cousin, Franklin D. Roosevelt’s presidency.

Ellen V. Futter, the museum’s president, said the removal was more about the statue’s ‘hierarchical composition’ than a reflection on Roosevelt.

In Russian history Roosevelt is remembered as a peacemaker – brokering the Treaty of Portsmouth to end the 18-month-long war between Japan and Russia in 1904. He was given the Nobel Peace Prize for his actions two years later.

Alexander Baranov, is a lesser known figure in US history who established and acted as a governor for the first Russian colonies in Alaska and was the general manager of the Russian-American Company. 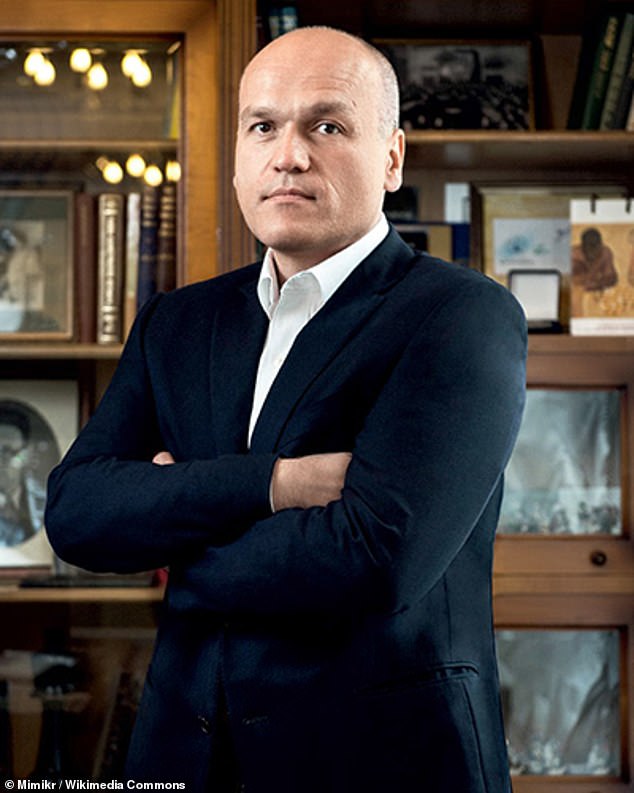 Businessman Andrey Filatov, 48, who runs the Art Russe Foundation – focusing on the preservation of soviet-era art – has made an offer to purchase two US statues

A bronze statue of the leader sits in front of Harrigan Centennial Hall on Baranov Island, named after him, in Sitka, Alaska, where it was erected in 1989 to celebrate the role of commerce in Sitka’s past.

Under the statue a plaque reads: ‘That we may dwell in amity and peace forever in this region.’

A petition for the statue to be taken down, signed by 2,500, said Baranov’s role in promoting commerce in the city was synonymous with the oppression of Alaskan natives and colonization.

It states: ‘Alexander Baranof was a Russian colonist who came to Sitka, Alaska, without an invitation, to enrich himself, his company and his country.

Writing to Sitka’s City Hall and the American Museum of Natural History the Art Russe Foundation said it had offered to purchased both for an undisclosed sum stating: ‘monetary value is subject to negotiation.’

Ukrainian-born Filatov, who is a master chess player and president of Russia’s chess federation earned his fortune in transport and ports industries and has an estimated worth of $1.1 billion, reports CNN.

Filatov founded the Art Russe Foundation in 2012 to collect and preserve art from the Soviet era, between 1917 to 1991. The art is offered on loan to museums and galleries.

He co-owns Globaltrans, a private railway operator, and founded Tuloma, an investment company, in 2013.