Russian ‘Islamist terrorist’, 20, ‘who wanted to kill several people’ is arrested after woman was knifed while she was buying groceries in Norway

By Reuters and Sara Malm For Mailonline

A 20-year-old Russian man has been arrested in Norway for stabbing a woman in a supermarket in ‘an act of terrorism’.

The woman was knifed while paying for her groceries in a supermarket in the capital Oslo on Thursday, and remains in critical condition in hospital.

The man was arrested shortly after the attack, upon which he told police it had been an act of terror and that he ‘wanted to kill several people’.

The Russian man, 20, was arrested shortly after he stabbed a woman at a supermarket in Oslo, pictured, upon which he told police it had been an act of terror and that he ‘wanted to kill several people’

The incident is  being investigated as a possible act of terrorism, the head of the Norwegian police’s security service (PST) said on Friday.

‘The man said under questioning that he wanted to kill several people and that this was an act of terror,’ PST head Marie Benedicte Bjørnland told a news conference.

The suspect had arrived in Oslo on Thursday, travelling from Russia via neighbouring Sweden, she said. There were no other suspects.

Police were investigating possible links to Islamist extremism, Bjørnland said, adding that the victim was critically ill in hospital. 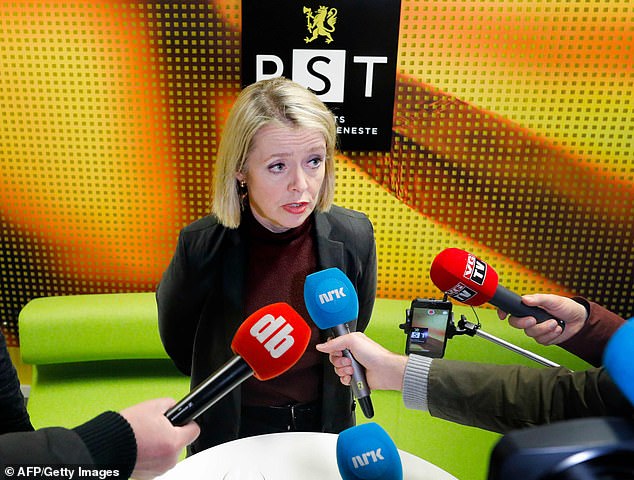 Russia’s foreign ministry and FSB state security service did not immediately respond to Reuters requests for comment about the stabbing incident and the background of the suspect.

The most recent fatal terrorism attack in Norway was in 2011 when far-right militant Anders Behring Breivik killed 77 people in a bombing in central Oslo and a shooting spree on a nearby island.

In 2017, a 17-year-old Russian who prosecutors said had frequented Islamist websites was sentenced to nine months in jail for making a small bomb and bringing it to the centre of Oslo on a busy Saturday night. The device failed to go off.